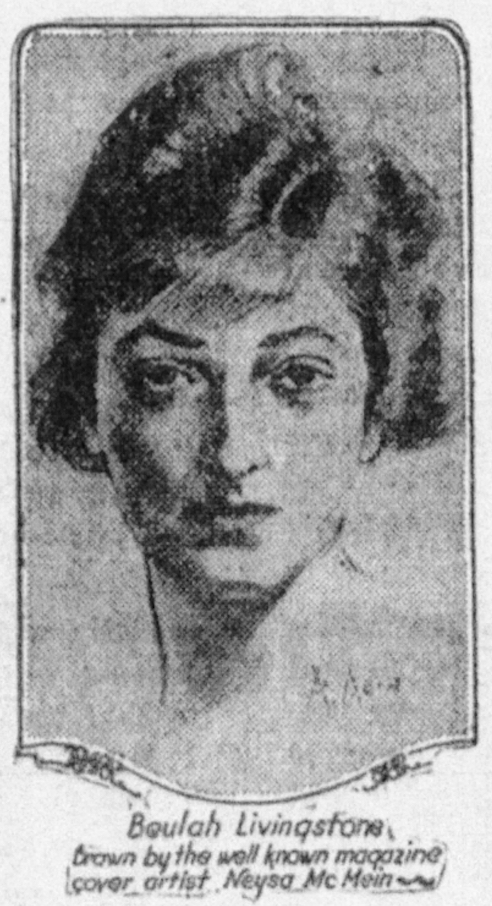 Born and initially educated in Atlanta, Georgia, Beulah Livingstone moved to New York City with her Jewish parents, Harry and Lucy Frank, and graduated from Ethical Culture Normal School (“Jewess Is Highest Salaried Publicity Director”). For a few years she taught kindergarten and also wrote newspaper articles for the New York Sun and the New York American as well as sold short stories to the New York Tribune. With savings, she took a trip to Europe, where she conducted celebrity interviews and met Sarah Bernhardt’s leading man, Lou Tellegen, who hired her as his press agent (“Woman’s World”). Soon after opening her own office for freelance publicity work in New York, Livingstone counted Anna Pavlova, Mr. and Mrs. Vernon Castle, David Belasco, F. Ray Comstock, and other high-profile theatrical figures as clients.

In 1916, she was lured into the movie industry, joining the Thomas Ince company to head its New York publicity department and to promote the release of Civilization (“Larger Offices for ‘Civilization’ Staff”). A year later, Olga Petrova engaged Livingstone as her personal representative in charge of special publicity work for her feature films (“Petrova Organization Completed”). While serving Petrova Pictures, which included publishing the sheet music for the “Petrova Waltz” that accompanied Daughter of Destiny (1918) and writing a story version of The Light Within (1918) for Photoplay, Livingstone organized the star’s 1918 touring appearances in support of the War Savings Stamp Drive (“Petrova Starts on Nation-Wide Tour”). After briefly handling the publicity for En L’Air Cinema’s Romance of the Air (1918), on January 1, 1919, Joseph Schenck hired her as publicity director for the Norma Talmadge Film Company, headquartered in New York (“Miss Talmadge Gets New Press Agent”). A few months later, Livingstone also took on a similar role for the Constance Talmadge Film Company (“Representing Both Talmadges”).

As publicity director for two of the biggest Hollywood stars of the time, Livingstone now ranked at the top of her profession. In 1921, she accompanied Norma on a tour of First National’s foreign exchanges in England, France, and Italy. While in Europe, one task was to contract newspapers to publish “The Life Story of the Talmadges” in twenty installments (“Talmadge Press Agent to Europe”). While in Europe, Livingstone observed the local film output, and, in an article published in Filmplay entitled “Trailing the Movies Thru Europe,” she compared ordinary Germany productions to the high-quality imports such as Passion (1920), Deception (1920), and Gypsy Blood (1920) that had won such praise in the United States. Her appraisal was devastating but also wittily snobby:

The heroines of these average German pictures are fat, ponderous and dowdy. They wear cotton stockings and their gowns would be scoffed at by Elsie Ferguson’s maid. They saunter into obviously painted drawing rooms where the sets fairly reek of cheap, second-hand furniture. The stories are often disgustingly vulgar or lurid and tawdry. The clean, domestic melodramas, the healthy boy and girl love stories which are so dear to the Americans, are considered sentimental piffle by our German and French cousins. (qtd. in “German Motion Pictures”)

Returning to New York, Livingstone mounted special campaigns for each Talmadge sister in 1922. For Smilin’ Through (1922), she had the Fair Department Store in Chicago put up a prominent window display of “the 1869 bridal gown and the quaint traveling costume worn by Norma in the picture” (“Putting It Over”). A few months later, for Constance’s East is West, she urged Samuel “Roxy” Rothafel to decorate the lobby of his New York Rivoli Theatre to create a Chinese atmosphere for the film’s premiere (“Grand Premiere for ‘East Is West’). At the same time, Livingstone did far less lucrative gigs, organizing a visit to Sing Sing prison to screen Norma’s film Within the Law (1923) for the enthusiastic inmates (G. Hall). By then, Livingstone’s position also encompassed the Buster Keaton productions. By 1925, all three companies were part of Joseph M. Schenck Productions, which became affiliated with United Artists (Schenck was chairman of the Board of Directors), although contractual arrangements allowed First National to release Norma and Constance’s features for another year. The following year, Schenck made Livingstone director of United Artists’ editorial department for the Talmadge sisters, Mark Pickford, Charlie Chaplin, Douglas Fairbanks, Rudolph Valentino, John Barrymore, and Buster Keaton. In this role, among other tasks, she supervised the selection of stories for all of these stars (“Beulah Livingstone Is in New U.A. Position).

In October 1926, the Associated Motion Picture Advertisers chose a dozen women “who had accomplished the most for the industry” (Spargo, “Pickford, Talmadge, and Mathis”). Seven were famous stars (the Talmadge sisters, Pickford, Gloria Swanson, Corinne Griffith, Lillian Gish, and Colleen Moore); four were major scenario writers (June Mathis, Anita Loos, Frances Marion, and Jeanie Macpherson); the only other influential figure was Beulah Livingstone. In a telegram, she wrote: “I deeply appreciate the Associated Motion Picture Advertisers’ kindness in placing me in such distinguished company and trust” (qtd. in Spargo, “Eberhardt Gets Telegrams”). After Schenck made her the “publicity director of all the West Coast feature productions” released through United Artists in 1927 (Starr), numerous newspaper stories described her as “the highest paid publicity woman in the United States” (“Her Publicity Pays Her”). Livingstone served in that position for the next ten years, reserving her barbed wit for the competition: when, at a party, Jesse Lasky boasted that “in some ten years Hollywood would be the center of culture,” she “remarked mildly—‘Oh, yes—of horti-culture’” (Herzog). In 1936, she moved to Universal Pictures, taking charge of its feature publicity department, and one of her first coups was get New York mayor Fiorello LaGuardia to grant an interview with starlet Deanna Durbin (Martin). In 1939, after publishing Remembering Valentino: Reminiscences of the World’s Greatest Lover (1938), Livingstone also became the publicity director of the Film Alliance of the U.S. Inc., which planned to release a dozen British and French films annually in the United States (“Beulah Livingstone Obtains New Post”). When she died in New York City in January 1975, the Detroit Free Press named her the “agent for film stars Rudolph Valentino, Lupe Velez, Bela Lugosi and many others” (“Deaths Elsewhere”).

Throughout her career, Livingstone showed a great interest in contemporary social and political issues. In 1921, she was vice president of the Lucy Stone League, which sought “to assure to married women the legal right to retain their maiden names” and, consequently, to change laws that forced them to use their husbands’ names for legal documents (M. Hall). With other industry women, she also founded a “Woman Pays” club that met weekly to interview celebrities. By 1948, the club had 200 members (Livingstone was honorary president) and was inviting important figures such as Dr. Kinsey to give talks to the group (Grether).

Livingstone also actively encouraged young women to try their hand at publicity work in the film industry. Unsurprisingly, given her own beginnings, she saw a connection between the profession and other journalistic endeavors, suggesting in 1922 that:

A good way to break into motion picture publicity is to cultivate a snappy idiomatic style and start in via the motion picture magazine route. They will always take interesting articles about stars, and as the “fan” magazines are taken by the publicity departments of all motion picture companies, your stuff will come beneath the eye of the director. Then, when you apply for a job your name will not be quite unknown. (qtd. in Talmadge)

“I think publicity is the coming game for women,” she added, and “I call it a ‘game’ because it is a fascinating one.”

“Representing Both Talmadges in New York.” Exhibitors Herald and Motography (17 May 1919): 35.