Women They Talk About

“In 2019, the AFI Catalog of Feature Films embarked upon a new, three-year initiative titled “Women They Talk About” to support unprecedented empirical research about the role of gender throughout the first century of the American film industry, 1893-1993. With generous grant funding from the National Endowment for the Humanities and The David and Lura Lovell Foundation, the project will repurpose AFI’s uniquely comprehensive, academic data to secure early female filmmakers in the historical canon.”

Read more about the AFI Catalog and the WTTA gender parity initiative here. 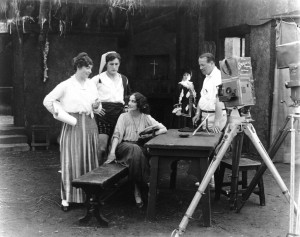 Filmmaker Lois Weber on the set of The Dumb Girl of Portici (1916). Courtesy of the Library of Congress.