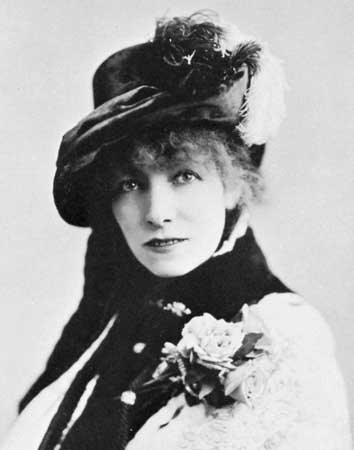 Sarah Bernhardt is the most famous actress of the late nineteenth century stage. Celebrated by an emerging and very vocal group of young female workers and artisans in her native Paris in the late 1860s and the 1870s called “les saradoteurs” (Rueff 1951, 48-49; Bernhardt 1923, 290), she went on to become the most popular actress of her generation in Europe, North America, and Australia. Attention has been paid to her “golden voice,”  the clever ways she marketed and promoted herself, her pioneering patronage of artists such as Alphonse Mucha and René Lalique, and her capacity to be at once a successful actress, manager, and theatre director (Pronier 1942, 93; Musser 2013, 154-174; Stokes 1988, 16-30). Scant attention has been paid, however, to Bernhardt’s involvement and success in the early motion picture film industry, both in France and abroad. This is surprising. Indeed, she was among the first celebrities to engage with the motion picture, playing Hamlet in a one-minute film that formed part of Paul Decauville’s program for the Phono-Cinéma-Théâtre at the Paris Exposition of 1900. The first feature film that she released–Camille (1911)–was promoted the following year by the French American Film Company in Moving Picture World as “Making New Records for Selling States Rights” (982-983). A subsequent advertisement in the same trade press claimed that the film was “The Fastest Seller Ever Offered State Right Buyers” (1088-1089). As many film historians know, Bernhardt’s Queen Elizabeth (1912) was the Famous Players Company’s first release in the U.S. It similarly enjoyed success, helping to open the market for legitimate motion picture exhibition in the U.S. Queen Elizabeth thereby provided audiences with their first experience of the longer-playing narrative feature film (Quinn 2001, 48). 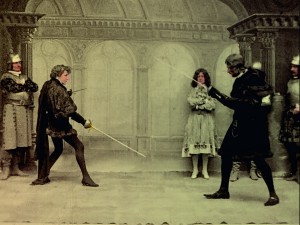 Although cinema critics, cinéphiles, and scholars have critiqued her theatrical acting on film (Lindsay 2000, 108; Bowser 1990, 204-205; Abel 1994, 316), Bernhardt’s contribution to the nascent cinema was broad as it was profound. She appeared not only in roles that were familiar to the late nineteenth century stage (Camille and Queen Elizabeth) but in new and original contexts. Of the films that survive, we can see her in rare celebrity “home movie” footage in Bernhardt at Home (1915), a social problem film Jeanne Doré (1916), as well as in a propaganda film sponsored by the French Ministry of War seeking American involvement in World War I (Mothers of France, 1917). The only film that survives from the post-war period is a fragment of the death scene from Daniel (1920). This shows Bernhardt at the age of seventy-seven performing as a young bed-ridden man dying of morphine addiction. Daniel is testimony to Bernhardt’s fame as an actress who specialized in the performance of death. Like her previous films, it is also testimony to Bernhardt’s refusal to accept invisibility even when she was aged and infirm (her right leg had been amputated in 1915). 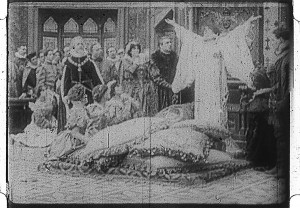 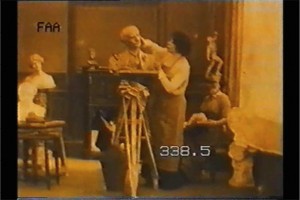 Bernhardt in her atelier, Sarah Bernhardt at Home (1915). Courtesy of the Filmarchiv Austria.

As an actress, Bernhardt was renowned for the innovative way she developed the spiral. She made this the structuring motif for theatrical action. We can see the spiral most obviously in the way she swivels to her death in Camille. We might argue, in this context, that Bernhardt incarnates the French art nouveau movement, bringing the signature tendril of this decorative art form to film. As Stephen W. Bush argued in the Moving Picture World in 1912, she accordingly made herself “more enduring than brass” (760). It would be remiss to separate the agency Bernhardt enjoyed as an actress literally shaping the meaning of her films from the making of the films themselves. Indeed, we need to ask: who directed theatrical action in her films? Who organized and framed the mise-en-scène, particularly since there are visual overlaps between photographs of Bernhardt’s stage productions and the mise-en-scène in some of her films? Finally, who modified the story of the original theatrical play for the screen? While directors such as André Calmettes, Henri Pouctal, Henri Desfontaines, Louis Mercanton, and René Hervil are (often jointly) credited with directing her films, and while Jean Richepin is famously credited for the screenplay of Mothers of France, we still need to determine the role that Bernhardt played as director and perhaps even manager, producer, and screenwriter of her own films. Indeed, it is inconceivable that a mature woman who was an actress, manager, director, and playwright on the live stage would relinquish creative control on film. 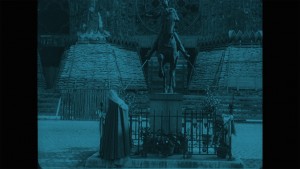 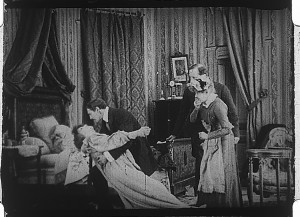 Bernhardt spirals to her death, Camille (1911). Courtesy of the National Film and Sound Archive of Australia.

Of Bernhardt’s extant narrative films, only three are available on DVD. These are Camille, Queen Elizabeth, and Mothers of France. Although Hamlet (1900) was newly presented in color as part of the Phono-Cinéma-Théâtre 35mm program organized by Laurent Mannoni at Le Giornate del Cinema Muto, Pordenone, in 2012, it is still unavailable online. It features only as a black and white “bonus” on David Menefee’s Camille DVD. Of the narrative films commercially available, these often show intertitles and feature music that has been adapted and inserted according to the contemporary taste of the DVD producer. The more representative examples of Bernhardt’s films reside, therefore, in various film archives in Australia, Austria, France, and the United Kingdom. For example, the best and most complete copy of Camille is located in the National Film and Sound Archive, Canberra, Australia, and must be seen on location. This contains the first two scenes that are missing from all available DVDs. Lobster Films in Paris, France, has a copy of Mothers of France that shows some of the original tinting. The film also allows us to see, quite clearly, Bernhardt’s vision of Joan of Arc. This was an excerpt from Geraldine Farrar’s film Joan the Woman (1916) that Samuel Roxy Rothapfel inserted as a special effect into the film when it arrived in America through a process of double projection, according to Motography in 1917 (665-666). Lastly, Filmarchiv Austria holds the extant copy of the 1915 “home movie,” Sarah Bernhardt at Home. Fascinating for the support this footage gives the contention that Bernhardt was an astute manager of her own public image, it has yet to be made publicly available for further study. 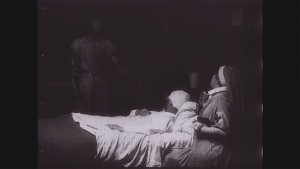 A vision of Joan appears, Mothers of France (1917). Courtesy of Lobster Films.

Just as there is no single repository or archive that holds all of Bernhardt’s films, neither is there a library that centralizes materials about Bernhardt’s involvement in motion pictures. Trade press reviews and publicity for Bernhardt’s American releases–La Tosca (1908), Camille, Queen Elizabeth, An Actress’s Romance (1913), Jeanne Doré, and Mothers of France– provide insight into how Bernhardt’s films were exhibited and received in the U.S. We must thank Lantern as well as Domitor’s Media History Digital Library, for these online resources. For the first time, scholars have easy and ready access to publications that help us better understand Bernhardt’s U.S. reception. 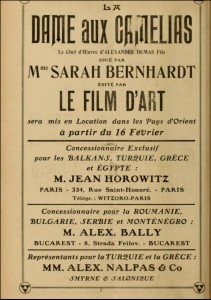 What, however, of Bernhardt’s reception elsewhere, in France or in any of the other countries across the globe that she vicariously toured as a “moving picture?” Online holdings for French film journals are sketchy, at best. Further, a January 27, 1912, advertisement for Camille in Ciné-journal advertises the film’s circulation in the Balkans, Turkey, Greece, Egypt, Romania, Bulgaria, Serbia, Montenegro, and the Orient (32). How was the film marketed and received in these countries? How long was the film in theaters? Recent work on Asta Nielsen systematically scrutinizes her appearance and interpretation in local newspapers across the world providing an exemplary model of scholarship for the research yet to be conducted on Bernhardt’s distribution, exhibition, and marketing (Jung and Loiperdinger 2013). Bernhardt studies can follow Nielsen’s reassessment, which comes on the heels of research into the related histories of the Danish actress on both stage and screen. Our knowledge of Bernhardt’s contribution to the early film industry hinges as well upon scholarly consensus as to whether she was given or claimed the kind of agency as producer now attributed to Nielsen. For all the exhibition catalogues, publications, and biographies newly written about Bernhardt, she still needs to be explored as a celebrity who shaped theatrical film both locally and transnationally.

Duckett, Victoria. “The Actress-Manager and the Movies: Resolving the double life of Sarah Bernhardt.” Nineteenth Century Theatre and Film no. 45, vol. 1 (September 2018): 27-55.

------. “Her Majesty Moves: Sarah Bernhardt, Queen Elizabeth, and the Development of Motion Pictures.” In The British Monarchy on Screen. Ed. Mandy Merck.  Manchester: The University of Manchester Press, 2016. 111-131.

An assortment of archival materials (images, clippings, and more) are held in various collections at the following institutions:

Museum of the City of New York.

2. Sarah Bernhardt as Actress and/or Herself (fragments of unknown films/newsreels, a documentary home-movie, and more)

2. Sarah Bernhardt as Actress and Screenwriter

3. Sarah Bernhardt as Screenwriter and Producer

Paris 1900. DVD-R. (Grapevine US) - compilation documentary made in 1947 about Paris in the early 1900s, includes footage of stars like Bernhardt.

Sarah Bernhard 1915. (Excerpt of Sarah Bernhardt with Sacha Guitry and an unknown women, maybe on the set of Ceux de chez nous).

Madame Sarah Bernhardt in “Daniel.” (Three excerpts that appear to be sequential although the third does not mention it is the death scene in “Daniel”): Excerpt 1, Excerpt 2, Excerpt 3.

The Gaumont Pathé Archives contains a great deal of streamed media relating to Sarah Bernhardt. A login is required to view these materials:

Sarah Bernhardt’s filmography was compiled using information from film trade journals, as well as the AFI catalogue and the FIAF database. While much information exists about Bernhardt’s involvement in the theater, it is unclear the degree to which her role as actress shaped and impacted the making of her films. Copies of prints also vary. The film of Camille that was screened at Il Cinema Ritrovato, in Bologna, in 2006 (from the Cinémathèque Française) does not include the opening scenes in Camille available in the copy held in the National Film and Sound Archive, Canberra. We therefore still need to determine the placement and sequence of scenes in some of her key films. The length of Camille and Queen Elizabeth varies considerably. For Camille, I have listed the length of the print held in the Cinémathèque Française and for Queen Elizabeth the length of the copy held in MoMA. However, when I contacted the NFSA, Canberra, to verify the length of their holdings (since their copy of Camille contains the opening scenes), Clare Norton told me that: “Unfortunately our catalogue record doesn't state the length of either film in feet or meters. However, working backwards using a 'feet to time' converter that our Collection Reference has here within their team database, a running time of 35 minutes [Queen Elizabeth] is approximately 1265 ft. and a running time of 25 minutes [Camille] is approximately 900 ft. These figures are based on 16mm film run at 24 frames per second.” These lengths are clearly different from those I have listed. Further, the available DVD of Camille does not have the NFSA’s opening scenes; it also has titles written by the producer of the DVD and these have been inserted into the film in places that depart from the placement of titles in extant archival copies. Finally, David Menefee states that a copy of La Voyante exists, but I have not been able to confirm this (Menefee 2012, 346).