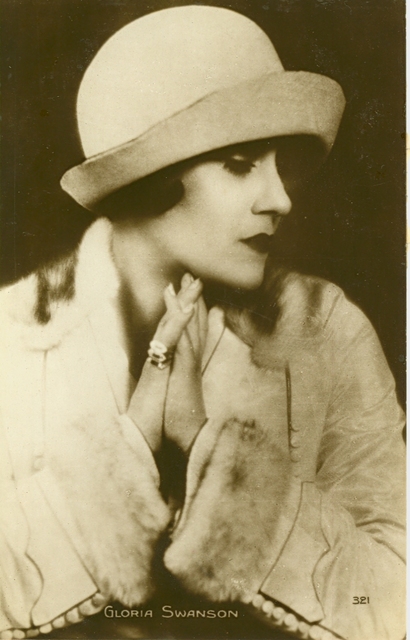 by Julie Buck
By the time Gloria Swanson started her own production company, she had already been part of the film industry for over a decade. Many actresses started their own production companies in the 1920s and ’30s in an effort to gain more artistic freedom and a bigger percentage of the profits. Rarely, however, were actresses involved in the day-to-day workings of such an arrangement. Directors, husbands, or studio heads usually handled details. Gloria Swanson, however, remains an exception as she handled the business side of her first company; she did it not for “artistic freedom” but, according to Swanson herself, in retaliation against Jesse Lasky (Swanson 261). 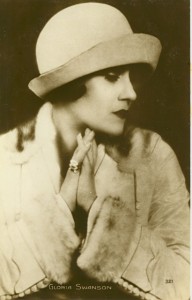 Swanson had been a star since late 1919, when she signed a seven-year contract at Famous Players-Lasky in a series of films directed by Cecil B. DeMille. But by the mid-1920s, as Swanson admits in her autobiography, she was beginning to feel very unsatisfied at Famous Players-Lasky. Churning out four to six films a year was exhausting, and while Swanson was the most successful actress in America (save perhaps Mary Pickford), by the mid-1920s her films were famous more for her fabulous costumes than for her acting or the story line (273).

In 1925 Swanson fought to make the film Madame Sans-Gêne. It broke many conventions, and, according to Harry Waldman’s book about American filmmakers working abroad, Swanson personally went to the French government with her request and managed to do what no other company (not even Ufa) had done: gaining permission to shoot in historic French sites. It was the first French-American coproduction in which both countries had a hand in the film’s development. Swanson was deeply involved in every aspect of the production, including having a say in who directed and who was cast (111). Swanson also met and fell in love with Henri, the Marquis de la Falaise de la Coudraye, who worked as her translator. She was, however, still married to her second husband, Herbert Somborn. While she and Somborn were estranged and in the process of getting divorced, she realized she was pregnant with the marquis’s baby. She and Henri planned to marry once the divorce was final; however, it would be clear that the baby was not Somborn’s and that she had committed adultery. Swanson’s contract at Famous Players-Lasky included a morality clause, and she knew her contract could be canceled and she could be banned from working at any other studio if this morality clause were broken. In the late 1950s, when she gave an oral history to Columbia University, Swanson claimed that her reasons for leaving Famous Players-Lasky were extremely personal and that she would never disclose them. But by 1980, when she published her memoir titled Swanson on Swanson, she was prepared to discuss the issue. 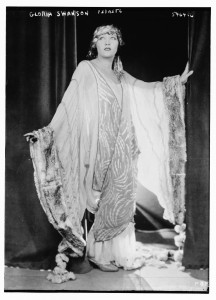 Gloria Swanson. Courtesy of the Library of Congress.

Swanson chose to have an abortion. The abortion was botched and she ended up almost dying in a Paris hospital. Swanson claims she single-handedly brought Famous Players-Lasky huge amounts of free publicity as newspapers wrote daily about whether she would live or die. In the months following, Swanson went through severe depression. Her contract was coming to an end, and Famous Players-Lasky wanted to renegotiate. But United Artists also made Swanson an offer. They would distribute her films, and she could make whatever she wanted, even if she only made one film a year. According to Tino Balio’s book on the history of United Artists, Jesse Lasky countered with double her $6,500 weekly salary, then increased the offer to $18,000 per week and finally to $1,000,000 per year (58). But ultimately, Swanson went with United Artists. She blamed Lasky for forcing her to abort the child she had desperately wanted, and she refused his offers because of the morality clause in his contract; she never wanted to be placed in that situation again (113).

At United Artists, Swanson quickly realized that starting a production company alone would be extremely difficult. Her first film, The Love of Sunya (1927), was a remake of the Clara Kimball Young film Eyes of Youth (1919). Securing rights and renting studio space was complicated, and the film took nearly a year to produce. But it’s easy to see why Swanson was attracted to the material. She was able to play numerous variations on the character of Sunya as she looks into a crystal ball and sees her future. The film also discussed mysticism and reincarnation, and in some ways could be considered the first new age film. Though Swanson was able to borrow money from United Artists to produce the film, she quickly went over budget. The film, which generated a huge amount of publicity, was requested by S. L. “Roxy” Rothafel to open the just completed Roxy Theatre in New York. Yet when The Love of Sunya went into wide release, it received only a middling response. While certainly not an outright failure, the film had to be sold to the overseas market to break even. 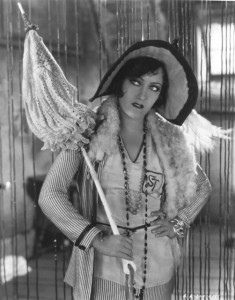 Swanson knew she could do better. She promised the head of United Artists, Joseph Schneck, that she would choose something less troublesome for her next outing. Instead she chose “Rain,” a huge Broadway hit that had been explicitly banned by the Hays Office. According to Swanson, she acquired the rights to “Sadie Thompson,” the story on which the play had been based. She even contacted W. Somerset Maugham and asked for sequel rights to make sure no one else could make the film (Swanson, 312). She then tricked Hays into giving her permission to shoot; though the Motion Picture Producers Association (precursor to the MPAA) was furious, there was nothing to be done since she had legitimately received his permission. Swanson also handpicked her cast and crew. According to the Los Angeles Times, Ernest Torrance was first announced to play reformer Alfred Davidson, but ultimately Swanson got her way and cast her first choice, Lionel Barrymore (A10). But the delays in securing Barrymore and the costs for food and lodging for a cast of hundreds on location in the Catalina Islands were mounting. And half the film had to be re-shot when Swanson’s cameraman was forced off the film by another studio. Initially budgeted at a quarter million dollars, the film’s cost had ballooned up to $650,000 by the end of principal photography. When post-production costs were factored in, Swanson would have to raise over a million dollars at the box office just to break even.Swanson was used to making and spending huge amounts of money. According to James Robert Parish in The Hollywood Book of Extravagance, Swanson’s lingerie bill alone for 1926 was over $10,000! (202) Just prior to starting her own production company, she was a multimillionaire whose every bill was covered by Famous Players-Lasky. Swanson knew Sadie Thompson was her best work, and the film was a smash with the critics and the public. Mourdant Hall of the New York Times praised the film and singled out Swanson’s performance: “Gloria Swanson… may have given clever performances in some of her pictures, but she displays more genuine ability and imagination in this present production” (12). Yet even with the seeming success of Sadie Thompson, a year and a half after joining United Artists, Swanson’s lavish lifestyle was leading her toward bankruptcy.

Enter Joseph P. Kennedy. The father of the future president was a successful Boston banker who was desperate to conquer the movie world. He had taken over the Film Booking Office and had merged it with the Keith-Albee-Orpheum to create RKO Pictures. Kennedy made millions off the merger while many stockholders lost considerable investments. But Kennedy wanted to be more than a banker in the film industry; he wanted to be a high-powered producer. 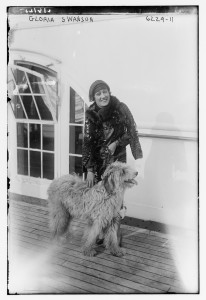 Gloria Swanson and dog. Courtesy of the Library of Congress.

Swanson was looking for someone to deal with her finances so she did not have to worry about the day-to-day stresses of producing and could focus on acting and choosing scripts. So Kennedy stepped in. He soon took over all of her accounts, fired her entire staff on the spot, and started a new production company called Gloria Productions. They also started an affair that would eventually break up her marriage to Henri.

Both Swanson and Kennedy wanted their first film together to be legendary, and consequently hired the most celebrated director of the silent era, Erich Von Stroheim. The film was the famously unfinished Queen Kelly. According to Swanson, Von Stroheim’s relentless attention to detail, his opulence, and his need for numerous retakes led to the film going over budget within weeks of shooting (374). But Swanson and Kennedy’s lack of experience were also to blame. According to Cari Beauchamp, Kennedy put everyone from the cast to the director’s assistant on salary months before principal photography started, and while they knew the film would probably need talking sequences, they had not hired anyone who was qualified or understood early sound techniques. As costs spiraled out of control, Swanson finally had to fire Von Stroheim when she realized much of his footage would not pass the censors. At that point, less than half of the film had been shot. Kennedy would spend the next few years trying to salvage the footage and cut it into something remotely useful. He hired director Edmund Goulding, an early fan of talking pictures (who would go on to direct Grand Hotel), to see if he could direct a few added sound sequences to finish the film. Shooting with a different director, however, proved to be impossible as Von Stroheim’s style was so distinctive. Queen Kelly would never be finished. Two years later, a few additional scenes were shot and an abbreviated version of the film was released in Europe. Kennedy’s failure led to the breakdown of his affair with Swanson. 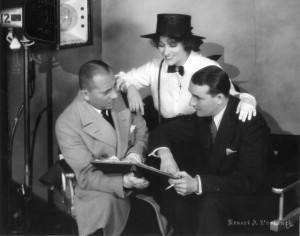 Swanson’s first sound film, a musical she produced titled The Trespasser (1929), was directed and written by Goulding. It was a smash hit and very well received by the critics (Kennedy, 86). Swanson starred and produced a few additional sound films in the early ’30s to complete her contract with United Artists, but the advent of the Great Depression made her glamorous, clotheshorse characters seem dated, and her popularity began to wane. She would have some success in early television, but ultimately would be remembered for her brilliant portrayal of fading former silent film star Norma Desmond in Sunset Boulevard (1950).

1. Gloria Swanson as an Actress

The Cecil B. DeMille Classics Collection. DVD. (Passport Video US 2007)

The Affairs of Anatol. DVD. (Image Entertainment US 2000)

Why Change Your Wife. DVD. (Image Entertainment US 2005)

Sadie Thompson (1928) is streaming online via the Internet Archive

Male and Female (1919) is streaming online via the Internet Archive

The Affairs of Anatol (1921) is streaming online via Kanopy

It is nearly impossible to create a proper list of Gloria Swanson’s early films. Her biographers and her own autobiography states she started working as an extra at Essanay in 1914; the titles of said films appear to be lost. Swanson is listed as appearing in Sunshine, a Keystone comedy, in various sources as one of the bathing beauties, but this can’t be confirmed. Though she is not credited in any source, Swanson appears to be a maid in the extant film The Misjudged Mr. Hartley. Nearly every published source lists The Nick of Time Baby as being released in 1916, with the exception of FIAF, which states 1917.