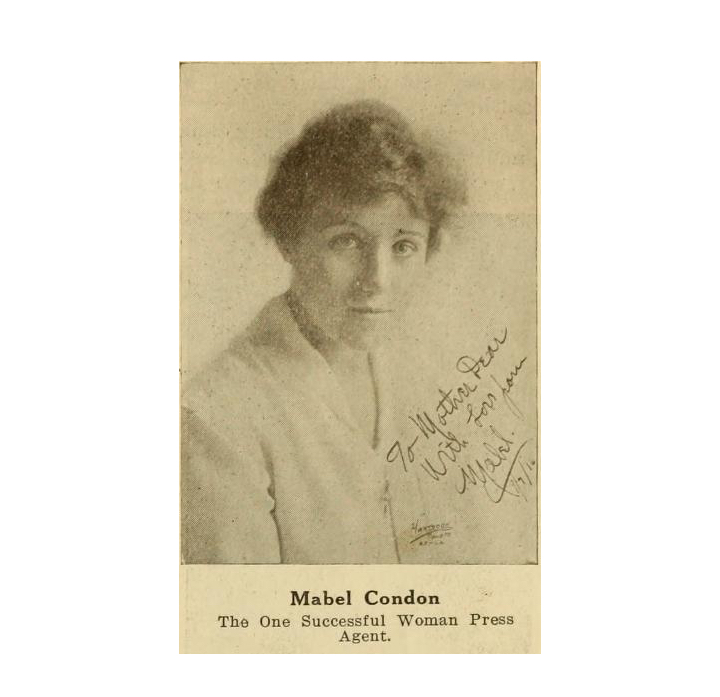 It would have been hard to page through any major trade publication of the 1910s and 1920s without coming across an item about Mabel Condon. During this time, Condon wore many hats in the film industry, working as a journalist, publicist, trade journal editor, and business owner. In 1916, Moving Picture Weekly called her “the best known newspaper woman in the film world to-day [sic]” (“At Work and Play” 25). Her fame was frequently the subject of jokes in the trade press, as when Photoplay columnist Delight Evans expressed her shame at always having to say no when people asked, “Have you met Mabel Condon?” (22). However, by the time of her death in 1965, Condon’s work was largely forgotten.

Condon was born on January 31, 1894, in Chicago, Illinois, to Timothy and Rosa Condon (née McDevitt). In 1912, when she was just eighteen years old, Condon began writing for Motography, a well-known film industry trade journal published in Chicago. In her first few months there, she wrote on a wide variety of topics, from the inner workings of Chicago’s film censorship board to the opening of a new picture palace in Winnipeg to the process of turning a scenario into a film. In the October 26, 1912 issue, Condon was listed for the first time as an associate editor of the journal. She once again moved up the ranks in 1913, when she became Motography’s East Coast representative and took charge of the publication’s new office in New York City. In a short piece announcing the branch’s opening in October 1913, Motography justified the selection of Condon, saying she was “already known personally to most of the trade, and through her departments at Motography, to most of our readers” (“Our New York Office” 228).

During her time at Motography, Condon frequently penned the publication’s “Sans Grease Paint and Wig” feature, which profiled a different celebrity each issue. Condon’s witty, first-person accounts of her encounters with different stars worked to humanize these larger-than-life figures. Rather than focusing on the glamorous nature of their lives, she emphasized the mundane, everyday aspects, such as leading lady Beverly Bayne’s self-professed candy addiction and Adrienne Kroell’s devotion to her pet canary “Billy” (1912, 325; 1912, 403). In these pieces, Condon highlighted the celebrity-fan relationship, frequently noting that stars corresponded personally with their fans and even, in the case of actor Francis Xavier Bushman, proudly displayed photographs sent to them by admirers. Through her writing, Condon emerges as a no-nonsense reporter who asked the right questions and was not afraid to tease and prod her subjects. She also refused to be treated differently because of her gender. She boasted in one essay, for instance, that she refused to sit in the only chair in actor William Russell’s dressing room when it was offered, instead insisting that Russell sit while she perched on the edge of his desk (1913, 159).

In June 1915, Condon officially left Motography and moved to Los Angeles to write for film magazines on the West Coast, according to an announcement in Motion Picture News (“Changes of the Week” 68). In her early days in LA, according to the trade press, not only did she write film reviews and pieces on stars, but she also worked as a press agent, became the West Coast representative for The Dramatic Mirror, and headed up a committee to represent activities of the Motion Picture Board of Trade in Southern California (“Committee on West Coast to Represent” 64). In 1916, Condon also wrote her first scenario, entitled The Man Who Would Not Die, a now-lost drama directed by and starring Russell. Later that year, she wrote the story for a comedy entitled Cupid Wins the Handicap, also for Russell’s production company, although it does not seem that a film with this title was ever released.

At some point between 1915 and 1916, Condon used her experience and contacts in the film industry to start her own business in Los Angeles. The Mabel Condon Exchange served as both a publicity agency and an employment exchange, and Condon’s responsibilities included finding roles for actors, arranging contracts, managing stars’ publicity and finances, and selling scripts and story rights. Among the earliest to join the Mabel Condon Exchange as executives were Ernest Shipman, a Canadian promoter and producer; Adelaide Woods, a former actress; and Myrtle E. “M.E.M” Gibsone, a well-known businesswoman who previously managed Kalem’s Hollywood studio. That Woods, Gibsone, and a number of other women worked at the company as publicists and agents challenges the notion that Condon was the “one successful woman” working in publicity during this time, an idea often reported in the press (Hoff 321). Though Condon was certainly not the only woman, these statements indicate that she was better known than many others in her field.

Mabel Condon (r) and Vola Smith in front of the visitors’ gallery at Universal City, in Moving Picture Weekly, June 1916.

Throughout the teens, the Mabel Condon Exchange grew in size and reputation. In September 1916, according to Motography, Shipman went to New York City to open an East Coast branch of the firm (“Join Condon Exchange” 619). Condon took a highly publicized, extended trip to New York in 1917 to hire new employees and secure new clients for the East Coast office. It seems likely that she traded on her longstanding relationship with Motography in this new venture, as her office in New York was located just two floors below her former employer. Condon once again became affiliated with the journal when she became its West Coast representative in 1917. The same year, Motion Picture News called the Mabel Condon Exchange “one of the largest publicity and engagement bureaus in Los Angeles” (“Mabel Condon Will Visit” 2889). The firm managed a number of important stars and filmmakers of the day, including Russell, Nell Shipman, Anita Stewart, William Duncan, Maude George, Bessie Love, and Helene Chadwick. A 1921 article in Picture-Play also attributed the success of Gloria Swanson to Condon, suggesting that it was she who introduced Swanson to director Cecil B. De Mille (Brynn 99).

In November 1923, Condon married Russell Juarez Birdwell, an advertising executive and publicist, with whom she later had a son, Russell Jr., and a daughter, Joan. Between the birth of her first child in 1924 and the mid-1930s, it seems that Condon closed her business to raise her children full-time, as there are almost no references to Condon or her exchange in the trade press during that time. In the mid-1930s, Condon used her new identity as a mother and homemaker to re-launch her publicity career. In 1936, she took a four-month long trip to Asia, producing at the end of it a book entitled Housewife Abroad. She timed the release of her book with the opening of a new publicity venture, the Mabel Condon Agency, which was much publicized in trade journals and Los Angeles newspapers. Stationary from 1937 indicates that her new firm had offices in Beverly Hills and Singapore. Whether Condon’s new firm was ultimately successful remains unclear, however. Condon’s name, once ubiquitous in the pages of industry publications, rarely comes up during this period. Instead, it seems that during the 1930s and 1940s, her career was often overshadowed by that of her husband, who became head of publicity for David O. Selznick in the mid-1930s and later opened his own firm, Russell Birdwell and Associates. After her marriage, mentions of Condon often cited her relationship to Birdwell, who was frequently mentioned in the trade press between the 1930s and 1950s, suggesting that he was the better-known half of the couple during this period.

Letters between the two, however, suggest that Birdwell frequently relied on Condon’s connections and advice in his work as a publicist, and that Condon played a crucial role in maintaining professional relationships with clients and the press in California when her husband spent extended periods on the East Coast. In 1944, Condon officially joined her husband’s advertising firm as a public relations executive. A draft of the press release announcing her new position indicates that she had been working for the company on a freelance basis before her official hire. She removed a line identifying her as “Mrs. Russell Birdwell” from the original draft of this release, and exclusively used her maiden name once at the firm, suggesting both that she did not wish to trade on her husband’s reputation and that her own name still had some currency in the 1940s. In a note to Condon on her first day in the 30 Rockefeller Plaza office of his agency, Birdwell acknowledged her contributions to the business that bore his name, welcoming her to the office they “created together” and predicting that it will be “more profitable than ever before” with her there (Birdwell n.p.).

It is not clear from Birdwell’s papers or from the press how long Condon worked at the agency, though reports of her death allude to a prolonged struggle with heart disease in her later years that may have removed her from her work. She died from a heart attack in 1965, at the age of seventy-one. Her obituary in the Los Angeles Times identified her only as “wife of publicist Russell Birdwell” and made no mention of her own career achievements (B15). A New York Times obituary also identified her first and foremost as Birdwell’s wife, but at least mentioned that she had been “a former writer and literary agent” (25). The trajectory of Condon’s life from celebrated film industry personality to “wife of publicist” is mirrored in her archival legacy, as much of what we know about Condon’s early career comes from the trade press, while almost all information about her later life comes from a collection of her husband’s papers. In both of these archives, we find evidence of a talented, creative woman who was incredibly passionate about her work and achieved immense success and recognition at a time when the contributions of other women to the field of film publicity were largely overlooked. Though she was not properly recognized by the press at the end of her life, and has so far been ignored by scholars, Mabel Condon and her many contributions to the film industry deserve to now be reinserted into film history.