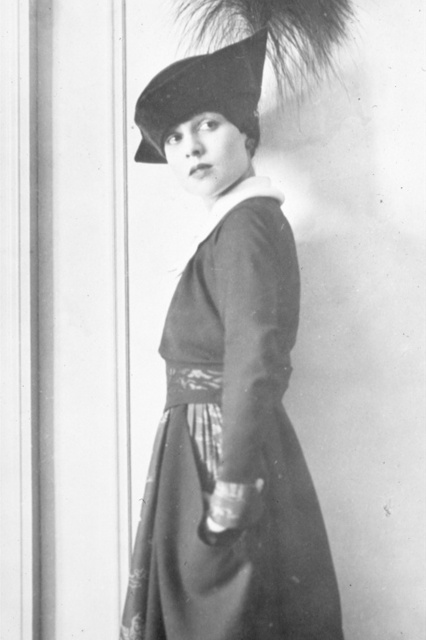 In 1917, Photoplay reported that “The most important service that Anita Loos has so far rendered the screen is the elevation of the subcaption [sic], first to sanity then to dignity and brilliance combined.” Further, the article went on, Loos had so convinced D. W. Griffith of the value of the intertitle, and he called her “The most brilliant young woman in the world” (148). A prolific writer who appeared in the press in a manner as glamorized as the stars she wrote for, Anita Loos wrote over one hundred and fifty scripts in her thirty years as a Hollywood screenwriter and elevated intertitles to an art. She is best remembered not only for defining the silent era personas of stars like Douglas Fairbanks, Sr., and the Talmadge sisters, Constance and Norma, but for also creating the character of Lorelei Lee in Gentlemen Prefer Blondes, a 1925 novel adapted to films in 1928 and 1953. 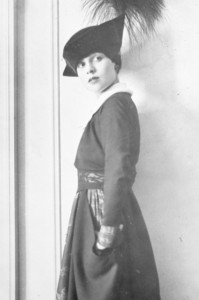 Bested in script output only by her friend and fellow screenwriter Frances Marion, according to Loos biographer Gary Carey, Loos is credited with elevating intertitles to “a legitimate form of screen humor” (44). Ally Acker agrees, claiming that “the art of the subtitle was born” with the film His Picture in the Papers (1916) from Loos’s script for Douglas Fairbanks, Sr. (1991, 177). Loos sold her first script to Biograph in 1911 and her second script was produced as The New York Hat (1912), directed by D.W. Griffith. One of her most celebrated scripts, The New York Hat was the last film that actress Mary Pickford made for Biograph and contains an early performance by Lionel Barrymore as well as Lillian and Dorothy Gish as extras (Carey 23). When Douglas Fairbanks Sr. arrived at Fine Arts/Triangle Studios, Loos teamed with director John Emerson to write the scripts that led to Fairbanks’s initial film popularity. The combination of her verbal humor with his action-oriented energy is cited by a number of sources as the formula for his success. Carey quotes Loos as recalling that the challenge for her was to find the widest variety of “spots from which Doug could jump.” She satirized this aspect of the Fairbanks character by opening one motion picture with an intertitle that describes him as having “a vaulting ambition which is likely to o’erleap itself and fall on the other side,” followed by a scene of Fairbanks bouncing on a mattress in a bedroom (44). 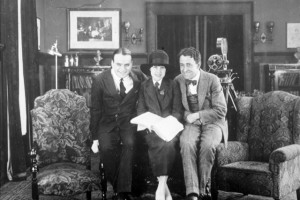 The Emerson and Loos team parted with Fairbanks in 1918 when he began making his swashbuckling epics, but Loos continued working with Emerson and the two eventually married in 1920. Joseph Schenck, head of Associated First National Pictures, signed contracts with Loos and Emerson to make films for Constance Talmadge. They made Talmadge’s next six films and eventually Loos wrote the 1978 biography of the Talmadge sisters when she thought their successes had been forgotten. The nature of the Loos-Emerson collaboration deserves further study. Gary Carey, as well as Cari Beauchamp and niece Mary Anita Loos write that Emerson insisted on receiving screenplay credit for virtually no contribution to the scripts that Loos wrote and even delegated away much of his directing duties to his assistants (Carey 55; Beauchamp and Loos 2003, 179). Marsha McCreadie writes that Loos had directed Constance Talmadge in Mama’s Affair (1921) and also that she coproduced some of her scripts (1994, 48). Although McCreadie’s claims have not, as yet, been substantiated by the other sources, Emerson’s well-documented hypochondria, philandering, and later institutionalization for schizophrenia raises the question of how much more work Loos may have done to make up for his severe shortcomings.

There is much information available about Loos, but relatively little discussion of her work as a screenwriter. Carey’s biography fills in some of the gaps in Loos’s own entertaining memoirs A Girl Like I, which chronicles her career in early cinema, and the subsequent books Kiss Hollywood Good-by and A Cast of Thousands. Louella Parsons frequently reported on Loos in her New York Telegraph column. Photoplay published a significant number of articles on Loos including one ostensibly written by her father and in 1918 a coauthored series on the craft of “photoplay writing,” which evolved into the 1920 screenwriting manual by Emerson and Loos. The publications sparked a February 1920 exchange with the New York Times about the virtues of using intertitles. There, Loos defends intertitles as basic to the silent scenario writer’s artistry, arguing that “attempts to limit the freedom of screen authors in the use of intertitles almost invariably result in limiting their artistic field” (X7). 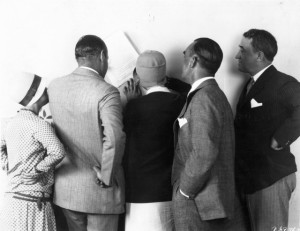 With so many of the films Loos wrote available for study, it is surprising that what little analysis there is focuses less on the extant motion pictures than on Loos’s 1925 novel, Gentlemen Prefer Blondes, which started as an amusing reprimand to H.L. Mencken. It was her satire of his behavior in the company of a “witless blonde” that eventually secured her financial success through countless editions, serializations, and theatrical as well as motion picture adaptations (Loos 1998, xix). Critical writing on the 1928 film Gentlemen Prefer Blondes and the 1953 remake directed by Howard Hawks and staring Marilyn Monroe, however, has not yet gone beyond criticism of the talented female writer for the representation of the iconic blond gold digger. Ally Acker, for instance, takes Loos to task for perpetuating the stereotype of the dumb blond who is no more than “tits, ass, and no brains” (1991, 176). New feminist approaches to the stereotype, however, may open up the study of caricature in such a way that a more complex portrait of both Loos and her characters will appear. An important step has been the publication of Anita Loos Rediscovered, which collects motion picture treatments and literary fiction from each era of the writer’s career. Published with the help of Mary Anita Loos, the writer’s niece who holds the bulk of Loos’s papers and manuscripts, this collection may encourage more analysis of a remarkable motion picture career, with special attention to the subtle complexity of Anita Loos’s humor. For most of her adult life, Anita Loos rose at five o’clock each morning to write, and her career in films spanned from 1911 to 1942. Because in addition to motion pictures she continued to write plays and novels, references to her abound in a wide variety of literary histories as well as Hollywood biographies. Just four feet eleven inches tall, she rose to the heights of critical and financial success, from her early stage experiences playing characters like Little Lord Fauntleroy, which earned her just enough money to help support her struggling family, to glamorous, glittering international celebrity.

His Picture in the Papers (1916) is streaming online via Kanopy

Intolerance (1916) is streaming online via Kanopy

Reaching for the Moon (1917) is streaming online via Kanopy

The New York Hat (1912) is streaming online via Amazon Video

The following extant films are incomplete: The Wedding Gown, For Her Father’s Sins, and The Halfbreed.

Sources differ on whether or not Anita Loos was involved in scripting The Musketeers of Pig Alley (1912). Many sources just credit D.W. Griffith.