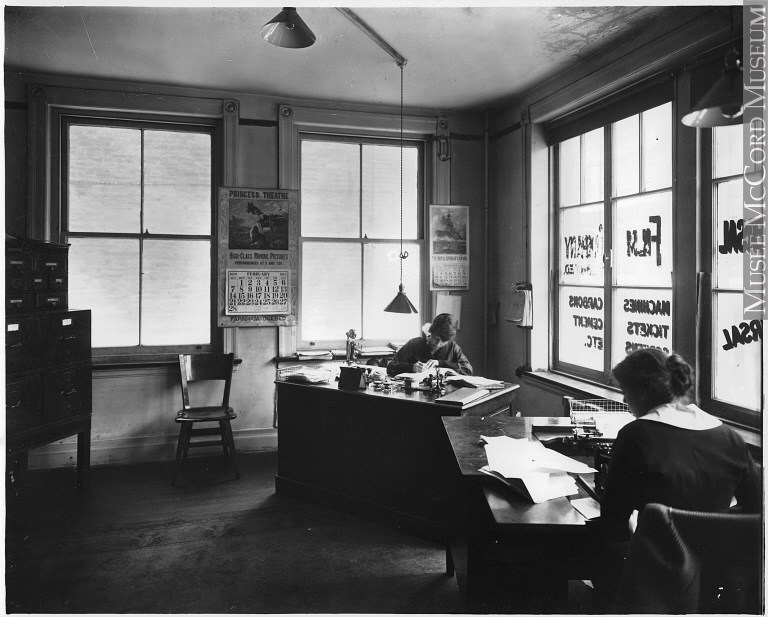 The Absence of Canadian Women in the Silent Picture Industry

How would women’s film history be written if there were no women filmmakers? This problem is not entirely hypothetical in the case of Canada because Canadian film history cannot be centered on film production, the model of so many other national film histories, because there was relatively little film production in Canada in the first decades. The dearth of Canadian domestic film production, whether with men or women in creative control, however, stands in stark contrast to a rich film-going culture in the silent era in Canada. The possibility of a history of Canadian women filmmakers from the silent era thus grapples with the processes that integrated moving pictures into the Canadian social formation, despite their imported status, most notably from the U.S. Because of this foundation of “history from below” rather than from the motion picture studio “down,” the Canadian Women’s Film History Project provides a significant and atypical historiographical intervention in the Women Film Pioneers Project as well as film history generally (Morris 1978; Lacasse 1988; Gaudreault et al. 1996). In order to study the particularities of the Canadian case, the project inverts traditional power dynamics between production and consumption, filmmaking and film-going, and film as an aesthetic expression of authorship versus film as a popular pastime.

Film and film-going made the modernity of urban life a legible, everyday practice. Within film studies, this “modernity thesis” is now a core problematic, articulating a significant shift in social relations, perception, and interpretation in the late nineteenth century as reflected and heightened in the swift rise of film-going in the early twentieth century (Keil, 2004,; Gunning, 1989, 51). The crux of gender in the emergence of popular culture is central, often distinguishing a film studies approach from overlapping historical and sociological analyses of industrialization or urbanization (Friedberg 1994; Rabinovitz 1998).

In the Canadian case, the question of how the Dominion of Canada incorporated women into the social nexus makes particularly evident how gender was entangled with the rise to mass awareness in everyday life of modernity and modernism, nation and nationalism, secular commerce and consumption. The limitations of focusing on women creative producers have already come to the fore in the U.S. Women Film Pioneers Project, with so many still-unaccounted for workers, even as archival work on women in early Hollywood continues. The limitations of implicit auteurism become more clear after retrieving a wealth of work on women directors, writers, and producers. As it explores other parts of the world, the Women Film Pioneers Project has the potential to explore these conventional categories. It is timely to recognize that such an auteurist framework would never have sufficed in the historical case of Canada, which is one way the Canadian Women Film History Project plays an important role in global cultural history. 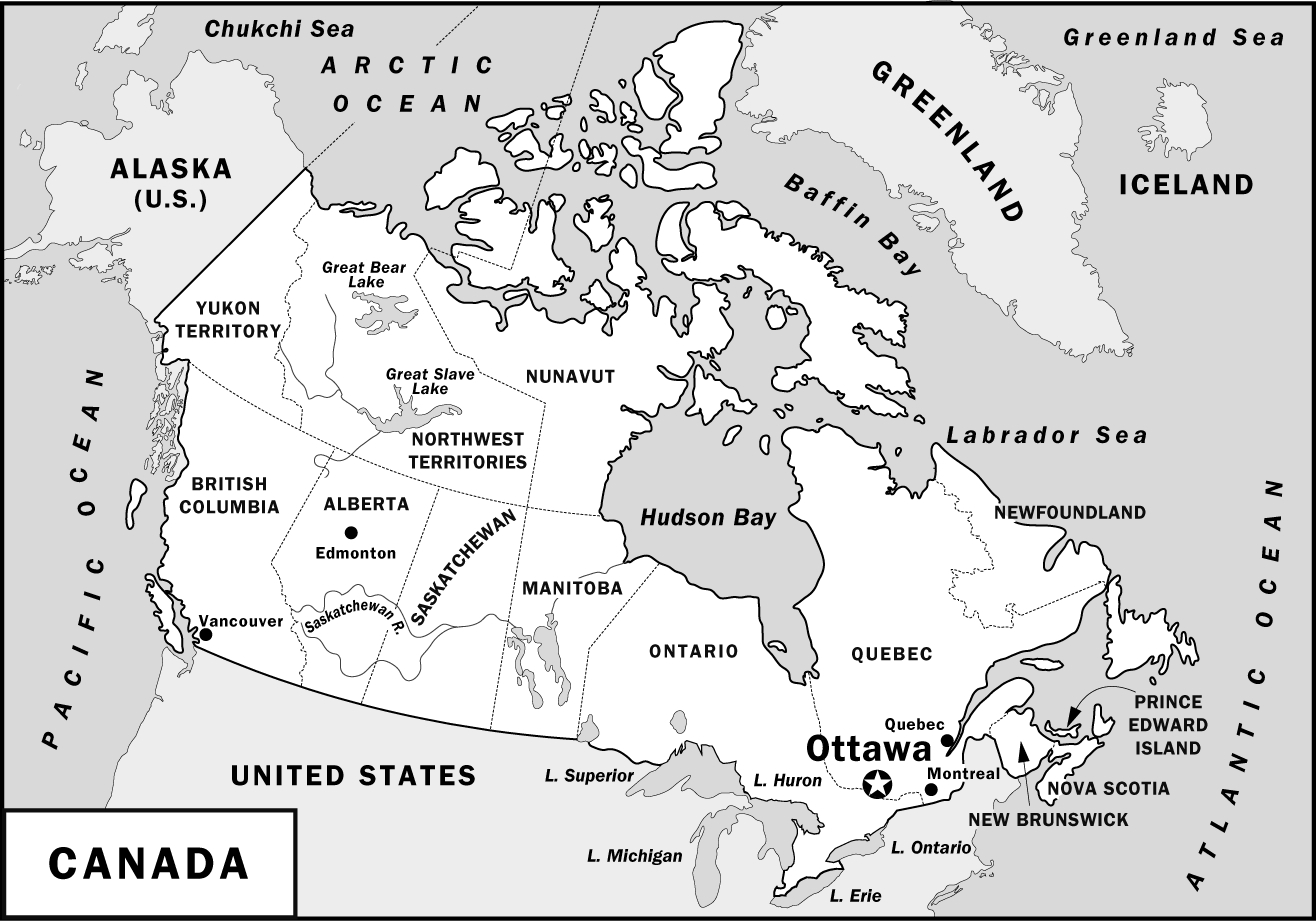 Starting from outside the dominance of Hollywood studios as a research site, this project treats film production as inseparable from women’s wider social place. There were a few women film producers (Nell Shipman, Dorothea Mitchell), but they must be considered in relation to women as consumers in the audience, as reformers and parents in local institutions, and as workers in regional film “showmanship” and local distribution. Often in conflicting ways, women worked to articulate the relation of film to the social, making the global technological and commercial product part of local and regional culture. This cultural work took place primarily in the metropolitan cities of Toronto (Ontario) and Montréal (Québec), and is significantly at odds with the way in which Canadian culture has been constructed in the North American imagination as pastoral and incorruptible—unlike the blighted American urban experience. Urban modernity is as important in Canada as in other national film histories, although less easily cast in terms of race, mass immigration, or secular urbanization. Specifying Canadian inflections in issues of ethnicity, secularization, and industrialization in relation to women’s social place will highlight regional sensitivity in the emergence of mass culture. Thus we have organized our approach regionally as follows: 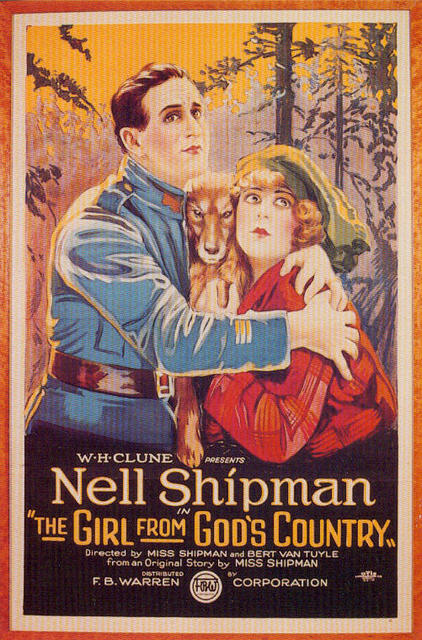 The key case from English Canada is that of Nell Shipman, the director, writer, and lead actor of the silent-era “God’s Country” films. Shipman is a challenging case, for she left Canada as an adolescent and made her career as an actor, independent producer, and director in the U.S. Nevertheless her films were set in a mythical Canadian wilderness, “God’s Country,” and she has been claimed as Canadian by indigenous scholars. Capitalizing on popular literary trends that highlighted the exotic Canadian northern pastoral wilderness, Shipman interlaced traditional tropes of the connection between women, nature, and animals with the heroic exploits of women figures of the cinematic serial queen adventurers. Distributed through commercial film channels even after her studio career ended, Shipman’s films are linked firmly to modernity. Many important women in the early American film history were Canadian-born. Most notably, the local roots and family connections of Mary Pickford and Marie Dressler were well-known and heavily promoted as home-grown movie stars in their heydays. Both continue to be celebrated in their hometowns, although more for their starring role than for their work behind the screen. Pickford received a star on Canada’s Walk of Fame in 1999 in her hometown of Toronto while Dressler’s hometown of Cobourg hosts a museum and annual silent film festival in her honor.

In the Canadian province of Ontario, there was no production “center,” precisely because domestic filmmaking was virtually non-existent. Yet Ontario was a center of sorts, at least within the domestic context. It was one of the two most populous provinces at the turn of the century in Canada, and was a major hub of manufacturing and finance for the country. Ontario’s proximity to American production centers and its colonial ties to Great Britain add a dimension of complexity to the context of film reception. Although Ontario film audiences were typically dependent on producers from other nations to supply cinematic representations of themselves and the rest of the world, those same audiences looked for ways to reassert their own centrality both to the images on the screen and to the building of their nation. Ontario therefore represents an important instance of how, in a colonial environment, cinema comes to construct an imagined community through foreign-produced images that delineate local identities.

Canada’s early film industry was essentially devoted to exhibition and distribution, with local views and newsreel services providing almost the entirety of commercial film production. Ray Lewis was editor of the Canadian Moving Picture Digest from 1918, just after its creation, until her death in 1954 (Pelletier and Moore, 2006). Lewis was the link between head offices and exhibitors across the country, editor of the only national film trade paper at the time. With Canada’s film business dependent on communication and distribution networks, Lewis was as prominent as the presidents of theatre chains and Hollywood franchises and one of the most important individuals in the Canadian film industry during the 1920s and 1930s. Throughout her career as a film industry journalist, she used the Digest to advocate more screen time for Canadian and British films, lobby and motivate independent exhibitors, organize minority shareholders, and generally support greater independence from Hollywood. In her editorials and reporting, but equally in simply keeping a Canadian film trade-paper viable and in print, Lewis was an early agent in distinguishing Canadian film culture from American norms. According to the Canadian Moving Picture Digest in 1940, she was one of two charter women members of the Canadian Picture Pioneers.

Women also played vital ancillary roles in distribution and exhibition. According to Paul Moore’s unpublished summary of Toronto women exhibitors, 1912 – 1924, at least twenty women theatre owners or managers, eighteen women musicians or pianists in theatres, fifty-seven women stenographers or secretaries in film exchanges, and forty women clerks, cashiers, or bookkeepers in film exchanges. The highest paid women workers were musicians, with Lillian Whitney, organist at the Strand, earning up to 2500$ per year. Yet the average women’s wage in the film industry was only 400$ annually, in comparison with the average men’s yearly wage of 1100$. This contrasts sharply with the highest men’s wages in the Canadian film industry, up to 30,000$ annually for each Allen Brother and N.L. Nathanson at Famous Players. 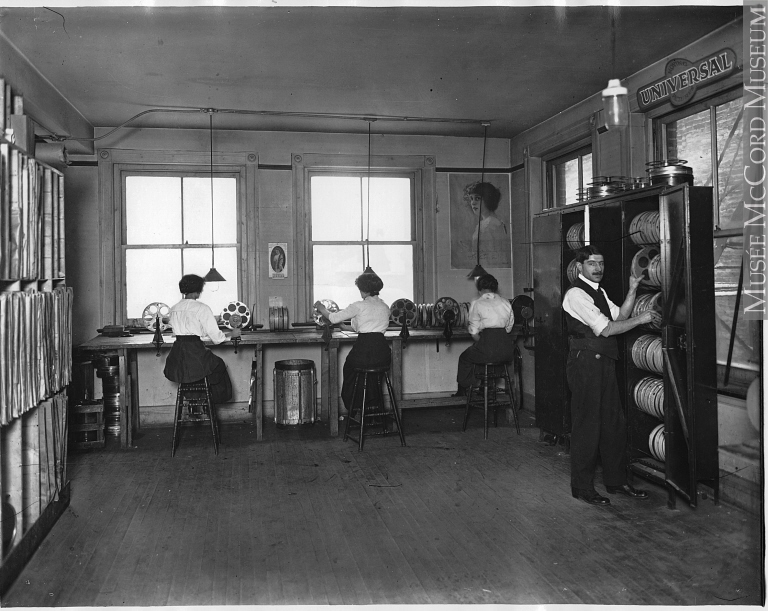 Québec represents an exception to received ideas about the Canadian film industry, since in the silent era moving pictures were actually produced there on a relatively large scale. By the early 1920s, organizations like the Associated Screen News and Léo-Ernest Ouimet’s Specialty Film Import were releasing new films on a weekly basis (Morris 1978; Lacasse 1988). Like most Canadian producers, however, these organizations largely conceded the fiction film market to foreign producers. As a result, the vast majority of films produced in Québec were actualities, newsreels, travelogues, industrial and sponsored films – all genres tending to dispense with the creative functions (screenwriters, actors) usually filled by women. Still, as Jocelyne Denault has demonstrated, the production of these films relied on the work of many women whose names unfortunately have not been recorded (Denault 1996). The women who worked on the few fiction films produced in Québec in the silent era have fared slightly better: the names of Emma Gendron and Marguerite Marquis (screenwriters) as well as Estelle Bélanger (actress) have been retrieved by historians. Many more Québécoises are known for their work within the US film industry: Florence LaBadie and Pauline Garon, both fairly prominent actresses in the 1910s and 1920s, had roots in Montréal, while one bona fide star, Norma Shearer, grew up in the wealthy city of Westmount, a predominantly English suburb of Montréal. (Jacobs and Braum, 1976).

In terms of distribution and exhibition, women were regularly employed in clerical positions by distributors, as demonstrated by an exceptional series of photographs taken in Universal’s Montréal bureau in 1913. Exhibitors also routinely employed women as ticket sellers and ushers. A few women managed to follow in the footsteps of pioneer exhibitor Marie de Kerstrat to reach more prominent positions in this predominantly male industry. Pianist Vera Guilaroff was one of most celebrated film accompanists in Montréal. In small-town Rivière-du-Loup, Yvonne Giguère (Mrs. Lucide Bertrand) was involved in the exhibition business from the 1910s until the 1970s, both as manager and owner of the landmark Théâtre Princesse – possibly the oldest Québec film theatre still in operation today.

First and most broadly, the Canadian Women’s Film History Project is engaged in researching the social history of gender in Canadian modernity through film and film-going. This theoretical concern is approached iteratively and collaboratively, building upon case histories of specific women, places, and practices. The Canadian Women’s Film History Project brings together disparate cases to begin exploring the common grounds of a shared problematic, and thus a possible new paradigm.