Emma Gendron was probably the main female figure in Quebec during the silent film era, but her importance appeared only recently along with new research about  the early cinema and its centennial. Ongoing research about her career as a screenwriter will probably also reveal more about her motion picture film activity, but she is now recognized as the first important screenwriter in Quebec. She wrote at least two scripts that were brought to the screen by her probable lover, Joseph-Arthur Homier—Madeleine de Verchères (1922), a biopic about a New France heroine, and La drogue fatale (1924), a thriller in which the drug mafia kidnaps the police chief’s daughter. Gendron might have written other scripts and might also have been more involved in directing these films, but nothing is proven as the films, and along with most of the relevant paper archives, were destroyed. 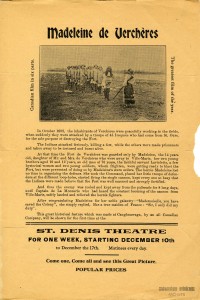 Like many scriptwriters, Gendron started her career as a journalist. Born in 1895 in a small Canadian village, she came to Montreal to study and started sending texts to newspapers and magazines. She was hired around 1918 by an important publisher, Poirier and Bessette, to write columns about women’s fashion and romance under the alias “Manon.” She also started writing serial romances published in the popular magazine Le Samedi. The publisher asked her to write a cinema fan column in their new magazine, Le Panorama, launched in 1919. In 1922, she wrote the play “Namounah,”a drama based on the history of a native princess who falls in love with a white man.  Gendron then met Joseph-Arthur Homier, a well-known professional photographer who also had made newsreel films about Montreal. The nature of their relation has never been completely clear, but until Homier’s death in 1934 they worked together very closely despite the fact that he was a married man with children.

There is no evidence that Gendron was involved in the first Homier film Ho Ho Jean (1922), a burlesque comedy about a tramp who tries to seduce a widow, a film now lost. Homier was trying to launch a fiction film business in Montreal and this first try was based on the personality of the popular actor Maurice Castel who played the tramp. The film was a local success and it is in the following project that Gendron is credited for the script, which was adapted from a book about a New France character. At the time there was a strong emerging national feeling in French Canada and many forgotten heroes were brought back in the media, among them Madeleine de Verchères who is said to have saved the new colony in 1692 by fighting the Iroquois with only a few settlers to help her. Like the film, the script is lost, but newspapers from the time like La Presse tell us that the film was considered realistic in describing the historical facts (1922, 15; 1922, 43).

Satisfied by the success, Homier and Gendron started another project that was miles away from the national history. La drogue fatale (1924) seems to have been inspired by Hollywood films of the time and this hypothesis has been ascertained when the synopsis of the film was recently rediscovered and is now available online and explicitly attributed to Gendron. The story is about a fight between the Montreal Police and a drug mafia leader; to stop the police investigations against them, the mobster kidnaps the police chief’s daughter and gets her addicted to drugs. She is later freed by another victim of the mafia who has fallen in love with her and will eventually marry her.

Homier and Gendron started another film project entitled Les fils de la liberté recalling the Québécois rebellion against the British empire in 1837-38.  However, probably because the previous film was not as successful as they wanted, the new project was never pushed forward to production. Homier went back to photography and Gendron to journalism. She specialized in the writing of cinema chronicles in newspapers and later in magazines that she edited herself. The main one was La revue de Manon, her alias as an author, where she wrote serial romances, gossip columns, and cinema fan chronicles all through the 1920s. After Homier’s death she married Allan Robert Green and started to publish serial novels and children’s comics, propagating the ideas of the “Rose-Croix,” a bizarre ideology mixing the ideas of Christianity and those of modern science.  She also became involved in politics and was a candidate in provincial elections where she raised the same strange ideas but also promoted women’s right to vote.  Gendron died in 1952 from an asthma crisis. She remained forgotten until the 1980s when historians started researching about Québécois cinema’s beginnings. Her archives are lost but the search through newspapers and magazines has slowly revealed her importance in journalism, cinema and, more recently, literature — a doctoral thesis being now in preparation about her serial novels