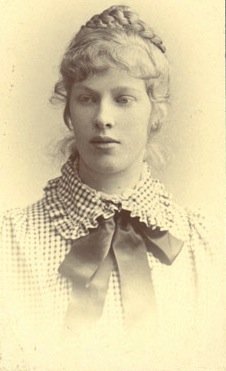 In the spring of 1929, the Port Arthur Amateur Cinema Society made Canadian history. To a crowded house in the city of Port Arthur, in Ontario’s largest theatre, their first feature-length film, A Race for Ties (1929), premiered. Not only was it one of the few feature-length films made in Canada at the time, but it holds the distinction of being the first amateur feature-length film in Canada, and the first of three that involved the talents of Dorothea Mitchell, a British-born, India-raised women who is best known as Ontario’s first single woman to be granted a homestead in that province’s history. 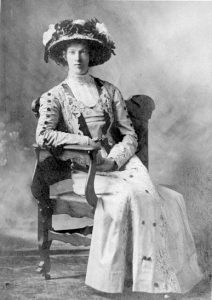 Mitchell’s involvement in film production resulted from a confluence of historical circumstance. The daughter of a British railway engineer, Mitchell spent the majority of her early life in India and received an education proper for one of the colonial elite. By the late nineteenth century, family fortunes had changed. In 1894, her mother’s health forced the family back to England. In 1897, her father’s death while away in India forced Mitchell and her sister to become governesses in the homes of the wealthy. Seeing no future in this line of work, Mitchell left for Canada.

Dorothea Mitchell arrived in Canada in 1904 and after short stints in Toronto and Hamilton, she answered an ad for a job as the companion to a mine manager’s wife at Silver Mountain, Ontario, a whistle-stop 75 kilometres from the then city of Fort William at the head of Lake Superior. When the mine closed shortly after her arrival, she turned her misfortune into opportunity by taking over the local post office and becoming the railway stationmaster. In 1911, she petitioned the Government of Ontario for the right to obtain a piece of crown land, arguing that she was responsible for the welfare of her mother and sister, and, after a feisty exchange of letters, which are held in the Archives of Ontario, Dorothea Mitchell became the first single woman in Ontario history to be granted a homestead. From there, she ran a small sawmill and lumber company, often filling in for men who quit suddenly. Her fair treatment of immigrant workers and commercial success against the lumber barons of the period earned her the respect of businessmen in Northwestern Ontario and Manitoba and the local nickname the “Lady Lumberjack.” In 1921, Dorothea Mitchell retired to the relative comfort of the city of Port Arthur, adjacent to Fort William. In Port Arthur she worked as an accountant and later became one of the first female real estate agents in Ontario. 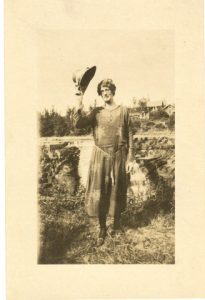 It was in Port Arthur that Mitchell was able to indulge in her passion for theatre and the arts. As a result of her theatrical and business connections, Mitchell met Fred Cooper, a local businessman who happened to own a 16mm film camera. Mitchell and Cooper spearheaded the creation of the Port Arthur Amateur Cinema Society; the first Canadian affiliate to the New York-based Amateur Cinema League, which was headed by Percy Maxim. At first, it was thought that suitable scripts could be found in magazines such as Movie Makers Magazine.  However, after purchasing one, Mitchell felt that none reflected the Canadian experience as she saw it, according to both a 1963 audio interview with Mitchell that is held in the Thunder Bay Historical Museum Society and her own notes entitled “A Race For Ties (Its Inception)” (1). These scripts, she believed, were also “too short” for the serious filmmaking envisioned by the Port Arthur Amateur Cinema Society (1).  At the urging of Fred Cooper, Dorothea Mitchell wrote an original script based on her own experiences as a sawmill owner and homesteader at Silver Mountain during the 1910s. 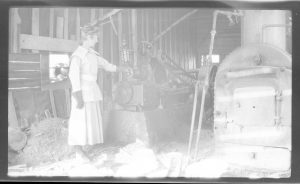 The resulting film, A Race for Ties, became Canada’s first feature-length amateur film and it premiered, accompanied by a locally made newsreel produced by Fred Cooper, on May 31, 1929. Afterwards, the film toured the Northwestern region of Ontario. A Race for Ties tells the story of a sawmill owner, Joe Atwood, and his race against a large timber company, headed by U. Cheetem, to sign an exclusive contract for railway ties. In addition to a plot driven by one of the region’s staple industries (the lumber industry), the film highlights the scenic nature of the region. The characters of Joe Atwood and his daughter are composites of Mitchell as she felt audiences outside of the region would find it difficult to believe a single woman could accomplish so much, according to an undated article held in the Dorothea Mitchell File at the Thunder Bay Historical Museum Society that is entitled “The Mitchell Story Continued” (n.p.). 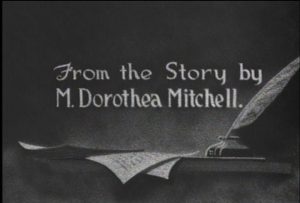 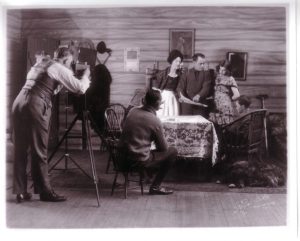 On the set of A Race for Ties (1929).C ourtesy of the Thunder Bay Historical Museum Society. .

Buoyed by the success of their first production, the Port Arthur Amateur Cinema Society completed their second film, Sleep-Inn Beauty (1930), in the summer of 1930. The film is a comedy about a bathing beauty contest based on a story adapted by Mitchell. Filmed over two days north of Port Arthur, Ontario, the cast included over sixty extras. The thirty-minute film was never exhibited to the public, although it was most certainly shown privately and eventually found its way into the Library and National Archives of Canada. 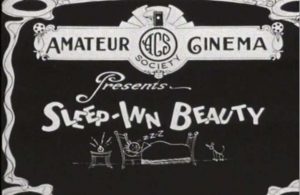 The earnest filmmakers from the Lakehead pushed on with their projects and in the spring of 1930, the Port Arthur Amateur Cinema Society, with Mitchell at the helm, took a leap of faith. Deciding to expand, the Society purchased office space and invested in new equipment such as arc lights and a larger camera in preparation for the production of a much more complex film. Following the successful formula established with A Race for Ties and Sleep-Inn Beauty, Mitchell wrote the script for The Fatal Flower (1930), a crime story set in Port Arthur. The plot of The Fatal Flower revolves around a young couple whose budding romance coincides with a rash of bank heists in Northwestern Ontario. The young woman’s father happens to be the chief of police, and he is murdered while investigating a tip about a robbery. In the end, the robber turns out to be the boyfriend and the young woman assists the police in his capture.

In May of 1930, Movie Makers Magazine reported that The Fatal Flower was nearing completion, running 1600-2000 feet of film footage (285). As it turns out, it was also going to be one of the last silent films to be made because the “talkies” had arrived and a revolution was taking place in the film industry. Needing only to complete the title cards, the Port Arthur Amateur Cinema Society did not finish the film due to the onset of the Great Depression and the instant success of sound films in the region. Not to be deterred, Mitchell took it upon herself to off the Society’s debts in an effort to keep her dreams alive. Despite her best efforts to reorganize and revive the film project, the unfinished Fatal Flower was the Port Arthur Amateur Cinema Society’s final film.

While the Depression prevented Dorothea Mitchell from finishing the film, the onset of the Second World War took her in a completely different direction when she responded to the call to take up arms for King and country. Enlisting in the Red Cross Society’s transport corps, she fully intended to go overseas following her training. However, when the time came, she was put in charge of training young recruits because, as she later found out, according to an undated written and signed recollection called “After Silver Mountain,” which is held in a private collection, that at the age of sixty-three she was considered far “too old for overseas service” (1-2). The Government of Canada put Dorothea Mitchell in charge of the local office of Voluntary Registration of Canadian Women. In 1941, Mitchell became secretary to the Dependent’s Advisory Board for the Thunder Bay Region and remained there until, grudgingly on the advice of her doctor, she left the Lakehead to retire to the West Coast of Canada. 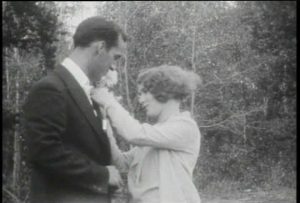 As with all her previous decisions to “retire,” it was not long after she settled into her new lodging in Victoria that Mitchell, now sixty-four, began to distinguish herself in the cultural milieu within the province of British Columbia. She once again became involved in amateur filmmaking by joining the Victoria Amateur Movie Club (VAMC), and also decided to expand her literary talents by joining the Victoria Branch of the Canadian Author’s Association, becoming secretary for most of the 1960s. While she was with this organization she began to write and publish numerous short stories based on her life, some of which, according to news reports, formed the basis of VAMC films (Brown 1971, n.p; Chadwick 1962, n.p.). 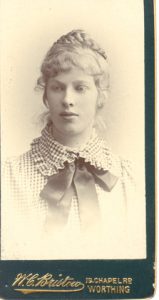 Her greatest literary achievement was the 1967 publication of Lady Lumberjack, a book she published at the age of ninety, and now a staple in the field of women’s history in Canada. Dorothea’s writings, like her films, are a testament to the pioneering life of a single woman who made Canada her home. Shortly after its publication, she was invited back to Port Arthur, now Thunder Bay, at the age of ninety-four in 1970 to re-screen A Race for Ties. At the event, reporters for the Port Arthur News Chronicle asked her why she decided in the 1920s to make films. Her reply, filled with her characteristic wit and charm, was like everything in life, she “did it just for fun” and to demonstrate that she could “compete in what was once a man’s world” (1970, n.p.). She passed away in Victoria in 1976 at the age of ninety-nine.

Entire correspondence between Mitchell and various government officials regarding the granting of a homestead are located in the Land File (RG1, C-5, Box 1654, File #8118/85). The Archives of Ontario.