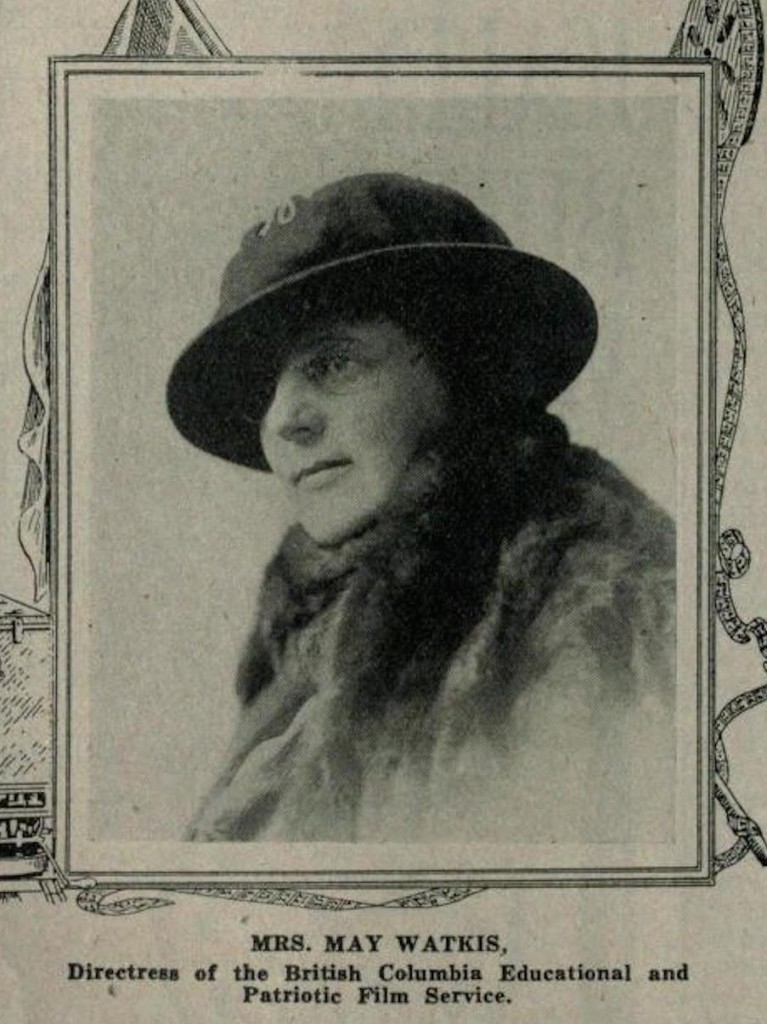 One of the early women pioneers in the Canadian film industry was May Watkis, a determined artist who never performed in front of the camera, but who blazed a trail for Canadian women in high-ranking positions behind the scenes. Having always wanted to work in show business, Watkis began exploring other possibilities when she soon learned she was not “a type, and would have little chance as an actress” according to article by Edith M. Cuppage in Maclean’s Magazine in 1921 (64). Undaunted, she began to look for film work in areas where few women had ever been employed.

When the province of British Columbia established a film censorship office in 1913, Watkis applied for the position of film censor. The attorney-general gave the job to a man. Undeterred and determined, she went to the new censor and offered her services as his assistant. He hired her conditionally. The catch was she had to work as his projectionist (Morris 149). While this sounds like a modest learning assignment by today’s standards, it was virtually impossible to do in 1913 when the projectionists’ union in BC and the state of Washington was all-male and refused to teach her. At a time when women did not have the right to vote in BC, learning a skill generally considered to be exclusively “men’s work” was going to be a tall order. Watkis told Maclean’s Magazine in 1921, “having tried to learn by fair means, I was now determined to learn by any means at all” (64). The Maclean’s article reported that Watkis made friends with a local projectionist and asked him to show her the ropes without explaining her motives. Watkis recalled, “he really became quite interested in me, and under his tutelage I projected successfully for several shows…” (64).

The new censor was suitably impressed and gave her the job of his assistant. The male union members were quite upset at the prospect of losing one of “their” jobs to a woman and protested against her appointment for more than a month, all to no avail (Morris 150). According to a letter from censor C.L. Gordon, held in the Attorney-General Files at the BC Archives in Victoria, as a projectionist in 1914, Watkis was paid one hundred dollars a year. This is the same salary as the third assistant censor, and ten dollars more than the clerk. Two other assistant censors were paid annual salaries of one hundred and twenty-five dollars and the chief censor made one hundred and seventy-five dollars.

Following this gender-breaking job assignment, Watkis worked as an inspector in the BC Theatres Branch, then in script departments in Hollywood, before returning to British Columbia and applying for the job to run the newly-formed British Columbia Educational and Patriotic Film Service [referred to in some sources as the British Columbia Patriotic and Educational Picture Service. Eds.]. She got the job and became the organization’s first “directress,” a gendered term used throughout the 1921 Maclean’s article, which effectively foregrounds both her position of leadership as a government film agency director and her status as a woman.

May Watkis. “She wasn’t a ‘Type’ so she Became a Directress.”

In 1919, the provincial film office in British Columbia adopted a mandate to foster economic development for Canadian industry and trade in addition to education. The British Columbia Educational and Patriotic Film Service was quite clear about the kinds of films it was to provide: “films…of a patriotic, instructive, educative, or entertaining nature; and, in particular…films…depicting the natural, industrial, agricultural or commercial resources, wealth, activities, development, and possibilities of the Dominion…” (Gasher 32-33). Particularly unique to the province’s desire to produce films about its industries and potential economic possibilities to foreign and domestic interests was its mandated quotas to BC’s movie theaters to show these films. Under the department of the Attorney-General, a quota provision required BC movie theaters “to introduce each film program with fifteen minutes of films either produced by, or approved by, the Picture Service” (Gasher 32). The quota represented “the first government film unit in North America with statutory authority to compel the screening of its productions” (Gasher 33). This pioneering directive eliminated the need to engage British filmmakers who had previously been able to guarantee exhibitions from England.

This represents the first time the British Columbia government imposed content restrictions; a practice that was severely criticized (Gasher 32). Corporate opposition was incessant and it even became a political issue in the 1920 provincial election. As a result, the fifteen-minute quota was no longer enforced by 1924 (Gasher 33). But perhaps the most ground-breaking contribution to Canada’s emerging film industry made by the British Columbia Educational and Patriotic Film Service was its revolutionary hiring practices. As we have seen, the state-run film organization was the first one to hire a woman, Watkis, as its head.

Always working on the outside of film production, Watkis finally realized her dream of being directly involved in film production when she was credited as a producer on the 1920 film Beautiful Ocean Falls, directed by R.J. Errington and produced by her British Columbia Educational and Patriotic Film Service. According to the entry on the film on the Canadian Educational, Sponsored and Industrial Film Archive website, Library and Archives Canada describes the silent black-and-white 35mm film as follows:

Watkis’ time in the position as directress of the British Columbia Educational and Patriotic Film Service was short-lived, however. Her Vancouver office was closed just one year later when all film activities were brought under the Provincial Censor’s Department in Victoria in 1921, according to an article in The Victoria Times (1921, 13).

It might be argued that the determination of Watkis and her subsequent appointments to male-dominated professions within the emerging Canadian film industry and within the government, opened the doors of the film industry to women across Canada, even if it was just a crack. Peter Morris points out that when Watkis was hired to serve as the censor’s assistant, women still did not have the right to vote (149), but there exists little scholarly discourse directly relating the impact of her gender-breaking appointment of running one of BC’s major government offices to the emerging suffragette movement. It does, however, position the Canadian film industry and its government collaborator in the province of British Columbia as being one of the first male-dominated industries and government bodies willing to initiate social progress for women.

There is very little documentation on May Watkis in the media and government archives at this time. For example, further research needs to be done on her time in Hollywood, which is only briefly mentioned in the 1921 Maclean’s Magazine article. Her appointments to high-ranking government positions were ground-breaking for women and would have merited journalistic interest as being a newsworthy first, yet there appears to be very little information on her in both The Victoria Times (a local BC newspaper) and Maclean’s Magazine (a national Canadian news magazine), outside of a short profile on Watkis in the latter.