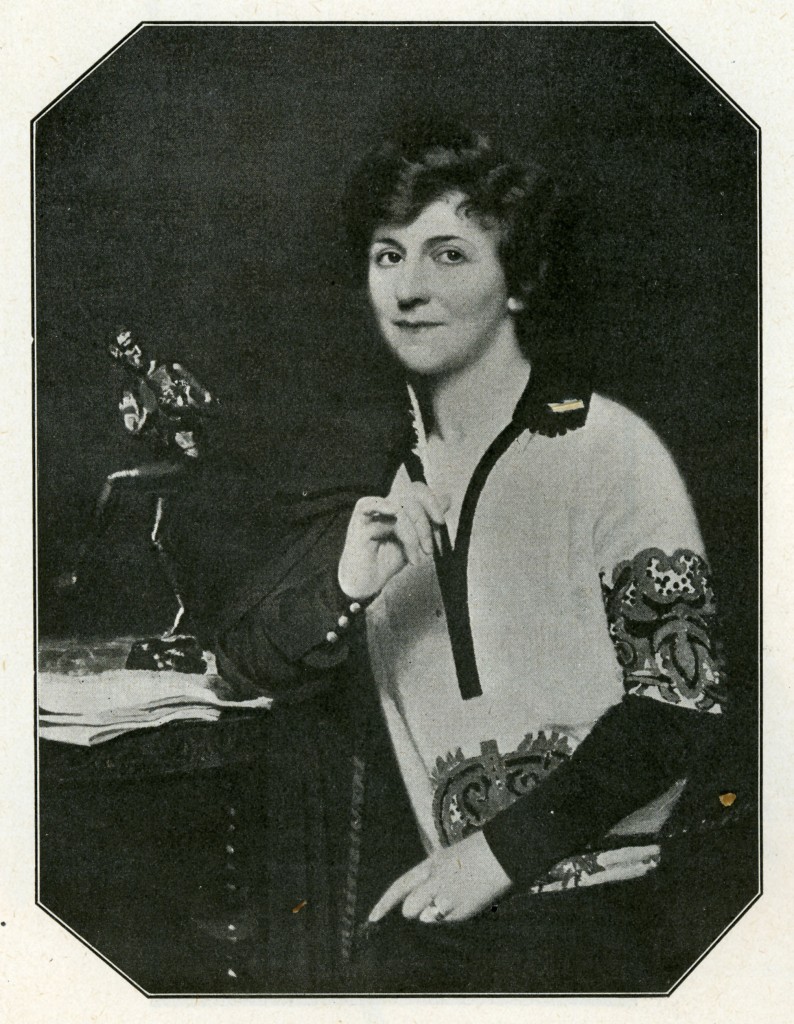 For nearly four decades, Ray Lewis was one of the most vocal representatives of the Canadian film industry. The trade journal she edited from the late 1910s until the mid-1950s, the Canadian Moving Picture Digest, kept the nation’s film exhibitors informed on a wide variety of topics. It also permitted Lewis to mount campaigns dealing with some of the most vital issues of the day, such as the defense of independent exhibitors and the quest for a distinctly Canadian film culture. 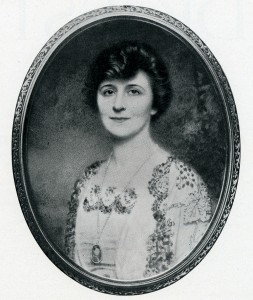 Ray Lewis’s early years have yet to be adequately chronicled: most of what is currently known about her life and career prior to her arrival at the Canadian Moving Picture Digest in 1918 derives from later accounts by Lewis herself, who defiantly remained a storyteller of the “print the legend” type throughout her life. Census data do reveal that she was born Rae Levinsky in 1883 to a Jewish family that had recently resettled from Polish Russia to the quickly developing city of Toronto, Canada. Lewis appears to have demonstrated from very early on a strong attraction to the dramatic arts as well as a taste for performing–a development which seems to have upset her conservative family. While Lewis’s claims regarding the many theatrical productions she is supposed to have starred in as a child remain for the time being unsubstantiated by historical research, a steady run of advertisements published in Variety shows that she was indeed well-established as a vaudeville performer by 1907, when she formed half of the Palmer & Lewis duo (1909, 36). The frequent and unexpected change of personae performed by Lewis throughout her life were already at the center of the act she developed with Palmer. She would later be in the habit of quoting her married self, “Mrs. Joshua Smith,” in the pieces she wrote as “Ray Lewis” for the Digest. The duo’s signature number, “Footlight Flashes,” required her to sing, dance, and personify an impressive number of characters in just a few minutes. By 1914, Lewis was writing and performing in dramatic plays. Four of the plays she wrote in the mid-1910s were deposited at the U.S. Library of Congress, where they remain available to researchers. One of these, “The Other Woman,” was performed in Toronto in 1915 under the auspices of a suffragist group. A strong autobiographical subtext can be detected in this play centering on a young woman attempting to launch a stage career while resisting the social pressure to marry. Lewis also published two volumes of poetry in the mid-1910s. 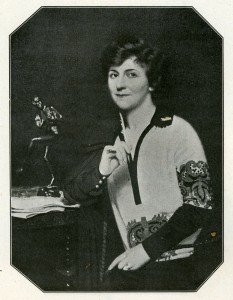 Ray Lewis portrait from her book Songs of Earth (1917).

Lewis appears to have developed during her vaudeville days professional relationships with Marcus Loew, Nicholas and Joseph Schenck, as well as the Allen brothers, operators of the first national chain of moving picture theatres established in Canada. However, she seems to have delayed her entry in the film industry until 1914 when she was asked to act as wardrobe consultant for Conness Till, a short-lived company that attempted to launch into fiction film production in Toronto. By the summer of 1915, she was living in Flushing, Long Island, and allegedly working as a scriptwriter for Lewis J. Selznick’s Equitable company. She developed a close relationship with the studio’s supervisor of production, Isadore Bernstein, who edited her first volume of poetry. Following the demise of Equitable, Lewis and Bernstein moved to Los Angeles, where at least one film adapted from one of her stories was produced, Loyalty (Jack Pratt, Bernstein Film Productions, 1917). This title remains Lewis’s sole screen credit in the filmographies compiled by the American Film Institute and the Internet Movie Database, even though Lewis also claimed to have worked between 1916 and 1918 as both a dancer and a writer for the Fox Film Corp. The scarcity of titles attributed to her in established sources should be considered in light of the claim, later made by Lewis in an article on August 20, 1927 in Canadian Moving Picture Digest, that directors and scenario department editors had routinely adapted, reconstructed, retitled, and even outright stole her stories (10). It should on that regard be noted that at least one Fox production of the era, Jealousy (Will S. Davis, 1916), presents some strikingly Lewisian features, such as its title echoing that of Loyalty and its lead character: a female dancer in love with an impoverished artist.

Lewis was back in Toronto in the fall of 1918 when she became the editor of the Canadian Moving Picture Digest, which would also become her property a few years later. The Digest had been the first Canadian film trade journal when it had begun publication in 1915, several years after the launch of similar French, British and U.S. trade publications. This delay can partly be attributed to the fact that Canada was at the time thoroughly integrated into the U.S. market, and thus extensively covered by publications such as Variety and the Moving Picture World. Accordingly, the quest for a distinctive Canadian film culture was one of the first causes taken on by Lewis in the fierce editorials and film reviews she wrote for the Digest. A staunch royalist and proponent of Canada’s Imperial connection, Lewis argued that British films should become a mainstay of the programming in Canadian theatres. A first extended stay in the United Kingdom in 1919-1920 (from which she returned with the British painter Joshua Smith, soon to become her husband) permitted her to tour British studios and buy products for the Canadian theatres operated by her friends the Allens. Her defense of British cinema nevertheless stood apart from that of most of the members of the Canadian elite in that it remained free of contempt towards Hollywood and, more generally, cinema as a form of popular entertainment. Lewis did not hesitate to praise U.S. films while criticizing the output of British studios, which she generally found less effective as entertainment. 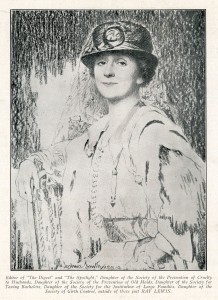 Lewis’s crusade for a British-Canadian film culture overlapped throughout the 1920s with her passionate defense of independent exhibitors. The Digest opposed the ruthless treatment of independents by Famous Players Canadian Corp. (managed in Canada by Nathan L. Nathanson, but vertically integrated with Adolph Zukor’s Paramount), which had gained monopoly control of the Canadian film market in the aftermath of its 1923 acquisition of the best theatres operated by the failing Allen Theatres chain. Lewis further opposed a deal formally transferring control of Famous Players’ theatres to Paramount-Publix in 1929. The Digest’s agitation on behalf of independent exhibitors and Famous Players minority shareholders eventually led to a federal investigation on Famous Players’ alleged monopoly in 1931. Lewis’s significant contribution (attested by numerous contemporary newspaper reports) to the investigation led by Peter White was, however, edited out of the Commission’s final report. 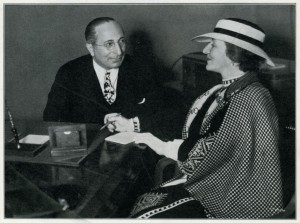 Lewis’s various campaigns showcased her ability to strategically deploy her multiple identities. She could at times foreground her female identity when striking a maternal tone to chide exhibitors or disclosing some of the insider info she was privy to (i.e., gossiping). She could also hide behind her male-sounding pen name when wishing to confuse opponents. She was for instance fond of one particular story centering on the discomfiture of a pair of stooges sent by Paramount executive Sam Katz “to kick Ray Lewis in the pants” according to a June 1930 Canadian Moving Picture Digest article (4). The 1930s saw a calmer tone prevail in the Digest, possibly as a result of the failure of the White Commission to bring reform to the Canadian film industry and of the arrival of Lewis’s son, Jay Smith, at the journal. Lewis, for instance, did not hesitate to applaud the return of Nathanson, once her archenemy, at the helm of Famous Players in 1933, and even became one of the chain’s affiliates when she opened the Toronto Pylon theatre in 1939. The indefatigable Lewis further broadened the scope of her activities in the 1940s and 1950s by getting involved with the Canadian Film Pioneers organization while also becoming active as a film distributor. She kept publishing the Canadian Moving Picture Digest up until her passing in 1954. Once a valuable resource for Canada’s distributor and exhibitors, Ray Lewis’s Digest remains an essential source for film historians.