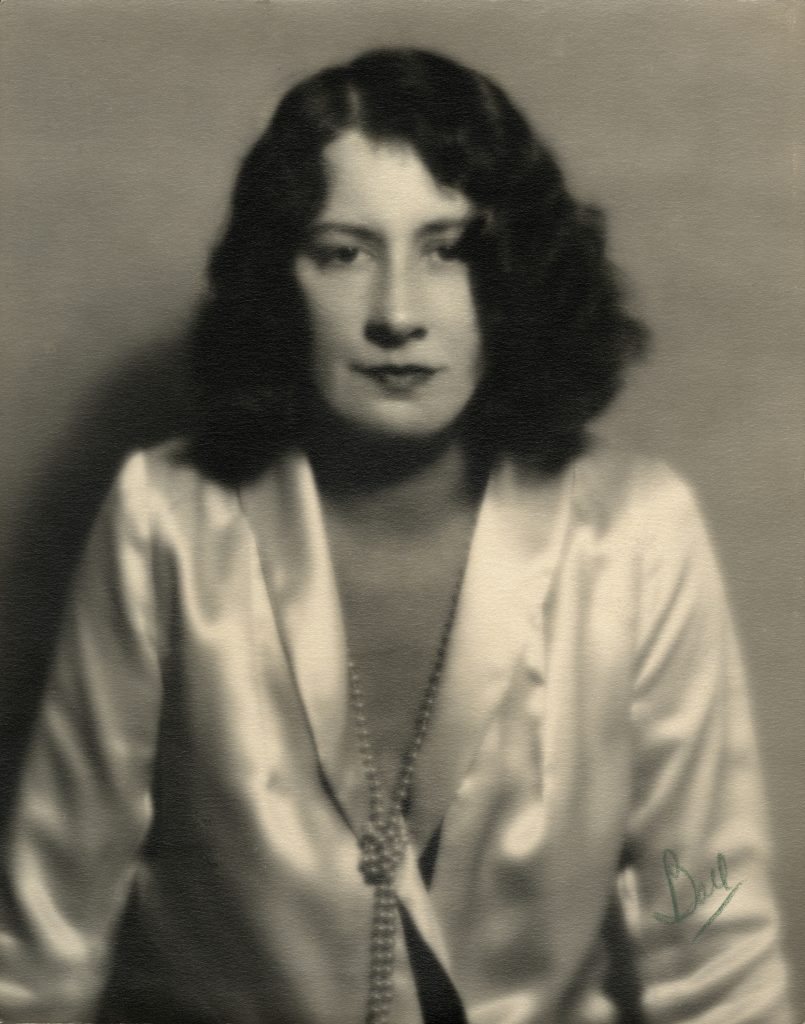 The remarkably prolific fan magazine writer Gladys Hall was born in New York City in 1891. According to typed biographical notes located in folder 541 of the Gladys Hall Papers at the Margaret Herrick Library, the young Gladys graduated from St. Gabriel’s School for Girls in Peekskill, New York. By her own account, Hall began writing popular poetry and short stories at an early age, and was published in magazines like Munsey’s, Cavalier, and H. L. Mencken’s The Smart Set. Hall married photographer Russell E. Ball on February 1, 1912, when she was twenty years old. That same month, a poem by Hall entitled “Fetterless” was published in The Motion Picture Story Magazine, the first movie fan publication, which had been launched by J. Stuart Blackton and Eugene V. Brewster the previous year. By December 1913, Hall was a regular contributor to the magazine and was on staff as one of several associate editors. 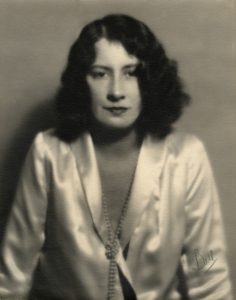 The Motion Picture Story Magazine was modeled on popular fiction publications of the time, and in its early years each issue featured a dozen or more photoplay stories written in novelized form. As an aspiring author, Hall appears to have found a great deal of success writing in this genre, which took the often relatively simple plot lines of films and spun them into short fiction. A publicity page located in a scrapbook in the Gladys Hall Papers states that she wrote between two and three hundred of these photoplay stories in the first decade of her career (1922, n.p.). During this time, Hall also contributed feature stories, profiles, and humor pieces to The Motion Picture Story Magazine, renamed Motion Picture Magazine in 1914, and edited the magazine’s “Public Opinions of Popular Plays and Players” column. According to an article entitled “Good Things A-Coming for 1918,” Hall and her fellow associate editors were also assigned to write many of Motion Picture Magazine’s monthly features, including “Greenroom Jottings, the Movie Gossip-Shop, Limericks, puzzles, photoplay reviews, verses, and various other departments, with no accredited authors” (121). During this time, Hall was also continuing to write fiction and poetry, as well as serialized novels and plays, and was regularly submitting her work to the many popular magazines of the day. Early in her career, like many fan magazine writers, Hall began using a number of pen names, including Faith Service, Janet Reid, and Russell E. Smith, though the vast majority of her stories were published under her own name. 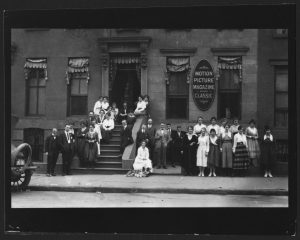 Though she produced a remarkable number of photoplay stories and other articles during her early years in the fan magazine field, Gladys Hall became most well known for her interviews with film personalities and other celebrities. In notes for an unpublished memoir entitled “Once Upon a Time in Hollywood,” Hall recalled that her first movie star interview was with the actor James Cruze in October 1913, and as early as January 1914, she published, under the name Gladys Ball, an interview with Blanche Sweet in The Motion Picture Story Magazine. In the late 1910s and 1920s, Hall chronicled the lives and loves of hundreds of stars, and on occasion writers and directors, of the silent screen, often interviewing the always fashionable actresses and reliably dashing actors at their homes or in lavish hotel suites or restaurants, which Hall captured in detail for her readers. Described by Flair magazine in 1950 as the “undisputed queen of the cozy confession” (35), Hall was a sympathetic interviewer who avoided writing about scandal and controversy, and often befriended the stars that she profiled (Slide 2010, 37-38). Later in life, Hall was quoted as saying, “People don’t want their movie stars torn down. Even if there WAS something to say against them, it’s not what the public wants. The public wants to believe in Santa Claus and in the movie stars” (Taylor 1947, n.p.). 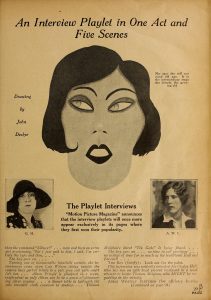 In the 1920s, Hall cemented her reputation as an interviewer when she collaborated with fellow Motion Picture Magazine writer and editor Adele Whiteley Fletcher on a string of featured stories on major stars, including Mary Pickford, Wallace Reid, Rudolph Valentino, Charles Chaplin, Gloria Swanson, and Colleen Moore. For this popular series, the interviews were structured as “playlets,” complete with a cast list, scene numbers, and stage directions. This format made Hall and Fletcher characters in a narrative that was as much about conducting the interview as it was about the interview itself. This also gave the writers the opportunity to comically contrast their own all-too-human shortcomings and prosaic concerns—how to get to the meeting on time, what to order for lunch—with the brilliance and kindness of their interview subjects, reinforcing the notion that stars are in many ways superior to regular folks. This self-deprecating style is also on display in “Here Are the Movie Mommers!” and “Lamentations of a Lady Interviewer,” both published in Photoplay in December 1921 and March 1922 respectively. In these short humor pieces, Hall wrote of the frustrations of dealing with overbearing stage mothers (1921, 77) and described being driven insane by uncooperative stars and their ever-present Pekingese dogs (1922, 82). 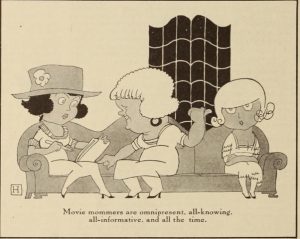 Illustration accompanying “Here Are the Movie Mommers!” in Photoplay.

Not all of Gladys Hall’s work was self-deprecating or comical, however. In 1922, Hall wrote a five-part series on film feminists for Filmplay, a new fan publication that billed itself as “a magazine of importance for every American home.” Hall’s profiles explored the feminist beliefs of actresses Elsie Ferguson, Madge Kennedy, Olga Petrova, and Lillian Gish, and screenwriter Rita Weiman. Even given the fact that the changing role of women in modern society was a frequently debated topic in fan and women’s magazines at the time, Hall’s articles are noteworthy in foregrounding feminism as the theme of the series, and for discussing issues like financial independence, socialism, equality in marriage, and opportunities for women in the film industry. Interestingly, Hall, who was a working mother and a member of the progressive The Woman Pays Club in New York, often comes across in the articles as more feminist than her interview subjects. For instance, when Lillian Gish suggested that women already “ruled the world” by supporting and encouraging powerful men, Hall disagreed, writing “I brought forth the objection that it is a humiliating thing to invariably rule from behind something or other, be it man, war, throne or philosopher” (Hall 1922, 21). Several of these articles, and other pieces that Hall had written for the fan magazines, were reworked for Hall’s syndicated newspaper column, “The Diary of a Professional Movie Fan,” which debuted in April 1922 and continued for about a year.

In 1927, Hall and her husband Russell E. Ball, who was now a noted portrait photographer, relocated their family to Los Angeles and settled in a house in Benedict Canyon. Though Hall had always been comfortable writing about film personalities from the vantage point of New York, the move not only gave her easier access to the stars, but also allowed her to write first-hand about the film industry and the studios. In the 1930s, Hall continued to freelance for a wide variety of fan and women’s magazines and was active in the Hollywood Women’s Press Club, which she had co-founded in 1928 with Louella Parsons and a small group of fellow writers. By the end of the decade, an article about fan magazine writers (or “hacks,” as the author called them) acknowledged Hall as the “Grand Old Dame of the Fannies” and reported that she was the most well-paid of all the writers, earning an estimated $10,000 per year (Cotter 1939, 18, 20). After the death of her husband in 1942, Gladys Hall moved back to New York, but continued to contribute regularly to the fan magazines, now singing the praises of a new generation of stars. Gladys Hall died in Huntington, New York in 1977 at the age of eighty-six.

Although she had a lengthy career and created an extensive body of work, there has been surprisingly little written about Gladys Hall or her contributions to popular discourse about film. Unlike fellow fan magazine writer Adela Rogers St. Johns, who achieved her own level of celebrity and crossed over to writing film stories, novels, and scenarios, Gladys Hall never became famous outside the pages of the popular magazines that published her work. Other than a handful of newspaper and magazine articles, the only significant published source on Hall is Anthony Slide’s excellent book Inside the Hollywood Fan Magazine, which profiles Hall and other important early writers and editors, including Adele Whitely Fletcher and Myrtle Gebhart. But despite Slide’s admirable research on Hall and her colleagues, there is much more that should be done to shine a light on the lives and careers of the dozens of women whose writing filled the pages of the fan magazines in the silent era. Although the sheer volume of their output and the ephemeral nature of their writing may make this research challenging, Gladys Hall and other early female fan magazine writers are pioneers whose influence on generations of female movie fans deserves closer consideration from film historians.