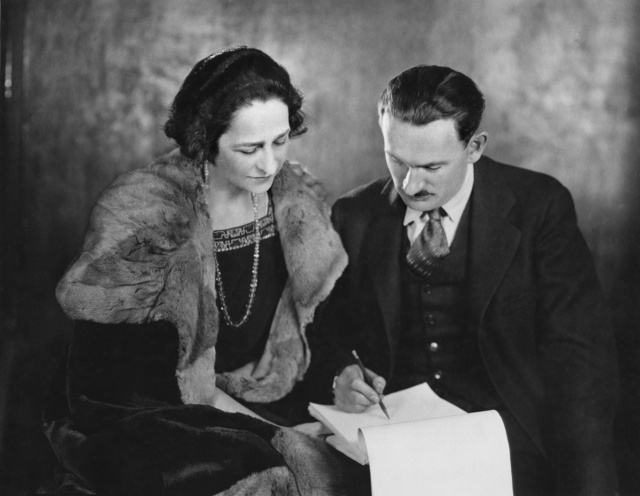 “He told me I’d better make my living with my brains [rather] than any beauty I thought I had,” writes Sada Louise Cowan in 1932, remembering her first interview with Cecil B. DeMille. An established playwright, Cowan had little experience with motion picture work. So when DeMille gave Cowan a studio pass, she started to visit the set regularly. “I made myself a complete nuisance,” she says, recalling that she learned about angles by standing behind the cameraman and asking the cutter millions of questions. It was Ruby Miller, supervisor of the “girls who copied scripts,” who helped her by showing her the best continuities, until one day on the set DeMille barked, “Tell that girl with the Japanese name to come over here.” He gave her a chance to work on the continuity of Why Change Your Wife? (1920) on which she is credited with the more experienced Olga Printzlau and William deMille. She began at twenty-five dollars a week, and director DeMille demolished her work, berating her as a failed writer whom he didn’t expect to succeed. Then, she goes on, one night after he had been so hard on her that she was left “limp and exhausted,” he apologized by raising her salary to sixty dollars a week. Cowan never thought of herself as part of the Famous Players-Lasky scenario department that included top writers Jeanie Macpherson, Clara Beranger, and Beulah Marie Dix. She explains in 1932 that even if she had a twenty-one week contract there, she still worked freelance (8). In Hollywood, however, it was well known that Cowan eventually became one of the highest paid writers for Cecil B. DeMille, as the Los Angeles Times reported in 1939 (A11).

Sada Louise Cowan was born in Boston, Massachusetts, in 1883. Probably of Jewish heritage, Cowan moved to Europe as a teenager and studied music in Germany, we are told in a 1919 collection of one-act plays (Gardner 77). She then went on to make her name as a playwright in “The State Forbids,” “In the Morgue,” “Pomp,” “Playing the Game,” “The Moonlit Way,” “The Honor of America,” and “The Wonder of the Age.” Thus, it was with a formidable reputation as a playwright that Cowan wrote her first credited silent film, The Woman Under Cover in 1919, at the age of thirty-six. Soon after she completed her first work with DeMille in 1920, she entered into contract with director-producer Harry Garson for several films starring his wife Clara Kimball Young, a deal that the Los Angeles Times announced with the headline “Signs Sada Cowan” (III13). The year 1922 saw the release of Fool’s Paradise, directed by Cecil B. DeMille, on which Cowan is credited with Famous Players-Lasky studio writer Beulah Marie Dix.

In 1923, at the age of forty, Cowan teamed up with writer-director Howard Higgin. Working freelance, they could alternate between studios. Thus, the Los Angeles Times printed the Universal Films announcement that the head office was happy with a script outline (31). For Universal, they completed, for instance, the extant title Smouldering Fires (1924), directed by Clarence Brown. Between 1923 and 1926, Cowan and Higgin worked together on numerous motion pictures, including Broken Barriers (1924), Don’t Doubt Your Husband (1924), Changing Husbands (1924), The New Commandment (1925), In the Name of Love (1925), and The Reckless Lady (1926). They were also frequently publicized together in newspaper articles discussing the craft of screenwriting, as the Los Angeles Times featured them in October 1923 (VI11).

If there are consistent themes in Cowan’s scripts, they would be marriage, love, divorce, and infidelity. Yet it is important to understand how these issues fit into a pattern of popular Jazz Age contemporary dramas that Karen Mahar describes as formulated by the DeMille trilogy, Old Wives for New (1918), Don’t Change Your Husband (1919), and Why Change Your Wife? (1920), the film on which Cowan learned so much (2006, 144–45). If the Moving Picture World called Why Change Your Wife? “as near a 100 per cent perfect picture,” why wouldn’t she continue? (1678). Mahar argues that the first of DeMille’s Jazz Age trilogy was in 1918 a risky move urged by Jesse Lasky, aware of the censorship climate immediately following World War I, but gambling that a sexually risqué drama would not attract censorship (2006, 146). Perhaps, then, we can locate Sada Cowan’s first scenarios in the space between the post-World War I censorship and the more constraining Hayes Office censorship that, beginning after his 1923 appointment, defined the rest of the 1920s and into the 1930s.

One could consider, for instance, that what was allowable to say about modern marriage over these years determines the outcomes of the domestic dramas to which Cowan contributed. In Why Change Your Wife? (1920) a dapper husband splits from his nagging, modestly dressed first wife (Gloria Swanson), only to discover that his second wife (Bebe Daniels) becomes a similar nuisance the moment he marries her. He ultimately returns to Swanson, not out of love or devotion, but because she has mended her nagging ways. Though it is possible to read the film as a parody of the shallowness of men, Why Change Your Wife? can also be seen to cynically reinforce notions of female subservience and interchangeability. In Changing Husbands, released by Famous Players-Lasky on April 6, 1925, and reviewed in Bioscope, actress Leatrice Joy played look-alikes named with switched initials: Gwynne Everett and Eva Graham, a housewife and an actress, each of whom longs for the life that the other one has. By the film’s end, the women trade careers and husbands (34). The Universal drama Smouldering Fires (1924), reported Bioscope, is “the tragedy of a woman of middle age who falls in love with a boy twenty years younger than herself, only to realize after marriage that his affections have turned to the first superficially attractive girl he meets, who in this case happens to be his wife’s sister” (51).

In her own personal life, Cowan was married and divorced two times. We could speculate a link between the failures of marriage and the sometimes jaded tone of her writing. Her first husband’s name was Fredrick James Pitt, although “Miss Sada Cowan” remained her appellation in professional endeavors. In 1929, the Los Angeles Times reported a second marriage to Dr. Ernest L. Commons. Although she was forty-six at the time, the press gave her age as thirty-four (A7). Cowan’s career in Hollywood had continued successfully until her marriage to Commons. In 1925 alone, several films on which she had writing credit were released, including The Charmer, The Trouble with Wives, and East of Suez, directed by Raoul Walsh and starring Pola Negri, based on a play by W. Somerset Maugham. After her marriage, reports vary as to her whereabouts between 1929 and 1932. Conflicting sources suggest that she may have been traveling, with or without her husband, in Europe or “the Orient” (A11). In 1932, however, Cowan reappears on the American scene as a writer of magazine articles, including some controversial essays on racial issues in the entertainment world in the Pittsburgh Courier and the New York Amsterdam News (A6; 8).

She eventually returned to work on plays and sound motion pictures including Woman in the Dark (1934), adapted from a Dashiell Hammett story. The Los Angeles Times heralded her return and ranked her as one of the three “ace writers” in the silent motion picture industry—all women, they noted—Frances Marion, June Mathis, and Sada Cowan. “Miss Mathis died and Miss Cowan, after a brilliant career in the films, married and went to Europe to reside. Marion was left alone to continue on. Cowan has returned now” (B7). At the age of sixty, on Saturday, July 31, 1943, Cowan died in Los Angeles (19). Samson and Delilah (1950), directed by Cecil B. DeMille, the final film on which she worked, was not released until seven years after her death (19).