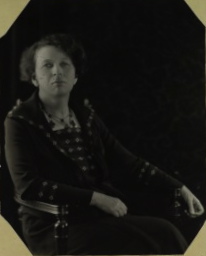 Beulah Marie Dix became a writer because it was one of the few respectable options available for women in the early twentieth century. The daughter of a factory foreman from an old New England family, Dix was educated at Radcliffe College, where she graduated with honors and became the first woman to win the prestigious Sohier literary prize. Instead of teaching, she decided to write after she sold some stories to popular magazines. She wrote mainly historical fiction, including novels and children’s books. In 1916, she went to California to visit her theatre agent, Beatrice deMille, mother of film pioneers Cecil and William, who had moved there with the Jesse L. Lasky Feature Play Film Company, which was that year to become Famous Players-Lasky after a merger with Adolph Zukor’s Famous Players. Dix decided to experiment with writing for the new motion picture industry just for fun, but became a successful and productive silent era scenario writer, as her daughter, Evelyn Flebbe Scott, recalled (7-9).

She began writing for William deMille because, according to her daughter, Evelyn Flebbe Scott, Dix felt he was a “dramatist of equal standing with herself” (47). She became especially known for her ability to write strong historical characters, and she had a flare for writing scenes of violence. Her initial experiments turned into a full-time writing job, and she was placed under contract at Famous Players-Lasky, soon Paramount Pictures. She mastered all aspects of screenwriting, developing original stories, such as vehicles for Sessue Hayakawa, including The Call of the East (1917), and adapting her own work, such as the 1906 play “Road to Yesterday,” as well as the work of other writers, including writing the remake of the 1914 The Squaw Man in 1918 for Cecil B. DeMille (DeMille 1959, 208). Dix wrote quickly and is credited on fifty-two motion picture titles, most written between 1917 and 1926. During the years 1917–1924, she was employed in the Famous Players-Lasky/Paramount Pictures scenario department, her tenure there overlapping with prolific industry writing legends Jeanie Macpherson and Clara Beranger, as well as Ouida Bergère, Eve Unsell, and Julia Crawford Ivers.

Beulah Marie Dix outside her home. Courtesy of the New York Public Library.

Beulah Dix had a tendency either to work alone or in close partnership with a few trusted friends such as screenwriter William deMille and her writing partner of the late 1920s Bertrand Millhauser. Her work and social life revolved around a small circle centered on the Beatrice deMille household. According to her daughter’s Hollywood memoir, Hollywood When Silents Were Golden, her mother relished her role as a workmanlike writer in the early days of Hollywood: “Best of anything, she liked being with the crew, a craftsman among mutually respecting craftsmen” (71). This self-perception is reflected in Dix’s depiction in the Hollywood trade press, where she was recognized as solid and respectable, but not at all glamorous, and as one of the top writers in Hollywood in the late 1910s and early 1920s. She was thus an ideal candidate for Paramount Pictures studio to send on a 1922 tour to lecture on the positive side of Hollywood, part of an industry initiative to counter stories involving the Fatty Arbuckle sex scandal and the murder of William Desmond Taylor (Scott 120-123).

Belulah Marie Dix reads script for The Country Doctor (1927) with husband in their Hollywood home. Courtesy of the New York Public Library.

According to her daughter, Dix did not like this too visible, too scandalous Hollywood culture. She especially disliked the practice of trading on social connections in order to secure work since she herself relied on talent and hard work (68). Dix’s smaller social circle and sense of professional standards might have led to her failure to make a smooth transition to the sound era. Indeed, her daughter surmised that her close association with the deMilles, who were successful but controversial, hurt her mother at contract renewal time with Paramount in 1924. She left Paramount and joined the new DeMille Studios in 1925. According to Scott, Paramount executives probably “took for granted she was part of the deMille group, and would not be happy or productive if left behind” (150). During the sound era, Dix continued to write for Hollywood, but more often as a freelance anonymous script doctor. We know little about how Dix felt about the trajectory of her screenwriting career because she left no personal reflections. Her life and career are described by others, such as her daughter, who herself became an industry writer, as well as by more famous coworkers and their biographers, the most notable of which were producer-director Cecil B. DeMille and his brother William. These portrayals converge in an image of Dix as a solid writer, proud of her craft, her work ethic, and her contribution to a new art form, the silent motion picture.

Trailer for EYE Filmmuseum's recent restoration of The Spanish Dancer (1923)

Dix is listed as screenwriter for On Record (1917) in Paul Spehr but not in the AFI database. Dix is not credited on FIAF for her work on Les Damnes du Coer (1928).