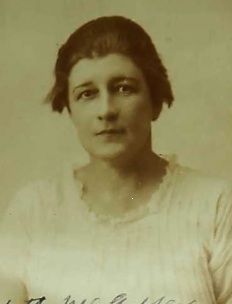 Elizabeth “Bessie” McGaffey founded the first studio research department in 1914 at the Lasky studio, where Cecil B. DeMille was the chief director. She was in charge of all research for his films until 1931, and then she became the head of R.K.O.’s research department. She also briefly tried scenario writing in 1916, writing the story for The Honorable Friend. 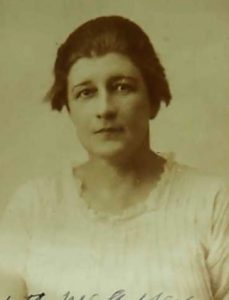 Elizabeth Brock McGaffey was born on January 17, 1875 in Chicago. After her father died when she was young, her mother moved the family in with her parents in Dubuque, Iowa. McGaffey went to school at St. Mary’s School in Knoxville, Tennessee and then, according to a later article in Motion Pictures and the Family, became a feature writer for the Chicago Interocean (1938, 3). After a brief career as a journalist, she moved to New York City to study drama at the Sargent School, and she became an actress in stock companies, touring with the Charles Frohman and Henry B. Harris companies. When she had enough of that, she became a play reader for Harris and for theatrical producer Joseph Grismer.

McGaffey and her publicist husband Kenneth McGaffey, whom she married in 1911, moved to Los Angeles and she found a job as a script reader for the Jesse L. Lasky Feature Play Company. Because of her wide experience and excellent memory, people got into the habit of asking her whenever they had a question. She “persuaded them to give her a dictionary, the National Geographic Magazine, and a public library card,” and with those tools she started the first studio research department in 1914 (Percey 1936, 253). 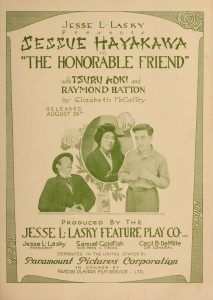 McGaffey also enjoyed writing, and in 1916 she sold a scenario to Famous Players-Lasky that was made into the film The Honorable Friend.  It was an unusual story because it featured only Japanese characters and the one Caucasian actor was in yellow face. The star, Sessue Hayakawa, got to play an ordinary man and a hero, not a villain or exotic, forbidden lover, as was often the case. The story involved a handsome gardener (Hayakawa), an innocent young woman (played by Hayakawa’s wife Tsuru Aoki), and an unscrupulous rich man, as well as kidnapping, murder, revenge, and self-sacrificing false confessions. Contemporary reviews, such as one by Lynde Denig in Moving Picture World, were favorable: “Pictures such as this, acted in the principal roles by Japanese players, are welcome because of their novelty, and the more so when the story stands up well on its own account” (1685). The Honorable Friend is considered a lost film.

On the strength of that film, McGaffey was promoted to the Lasky scenario department (Kingsley 1917, III19). Unfortunately, her career as a writer did not last long and, as far as we can tell, her only credit is The Honorable Friend. However, she did not leave the film industry—she went back to the library.

McGaffey was one of the dedicated women who helped DeMille make his films. This group also included editor Anne Bauchens, screenwriter Jeanie Macpherson, and executive secretary Gladys Rosson. McGaffey’s work was particularly important, because DeMille sold his epics on the strength of their historical accuracy. But her responsibilities went beyond looking things up in books; she also did original research. A 1930 article in Talking Screen described some of her work: “While compiling data for Dynamite [1929], she spent hours down in a mine shaft, absorbing the atmosphere, talking with mining engineers and workers, contacting the Hercules explosive specialists, and making notes on incidents and details so casual that they might never be used. For Madam Satan [1930], DeMille’s latest opus, she traveled about in a dirigible, recording the special phrasing of the officers’ orders and their individual slang. Not long ago Miss McGaffey took a submarine dive in San Diego; and she wouldn’t be surprised if Mr. DeMille should suddenly ask her to take a parachute jump!” (Cartwright 1930, 65). An undated 1928 payroll sheet for Famous Players-Lasky, held in the Cecil B. DeMille Collection at Brigham Young University, indicates that an “E.B. McGaffey” in the research department was earning $110 at that time, most likely per week.

McGaffey worked for DeMille until he closed his production office in May 1931 after his studio contract was not renewed. She quickly found a new job as research director at R.K.O. in August, according to a 1931 article in Film Daily (2). She stayed there until she died, on March 13, 1944, following a heart attack. While obituaries and her death certificate list her age as fifty-nine, census data indicates that she was five years old in 1880, making her actually sixty-nine at the time of her death.

In terms of her silent era credits, IMDb lists McGaffey’s (uncredited) involvement as “researcher” on The Green Temptation (1922), written by Julia Crawford Ivers, and Beyond the Rocks (1922), based on a novel by Elinor Glyn. The latter is extant and held in the EYE Filmmuseum's collection.

The British Film Institute credits McGaffey with “research” for the Mary Pickford film M'liss (1918), scripted by Frances Marion. According to the FIAF Treasures database, copies of this title are held at George Eastman Museum, the Library of Congress, UCLA, and the Academy Film Archive.