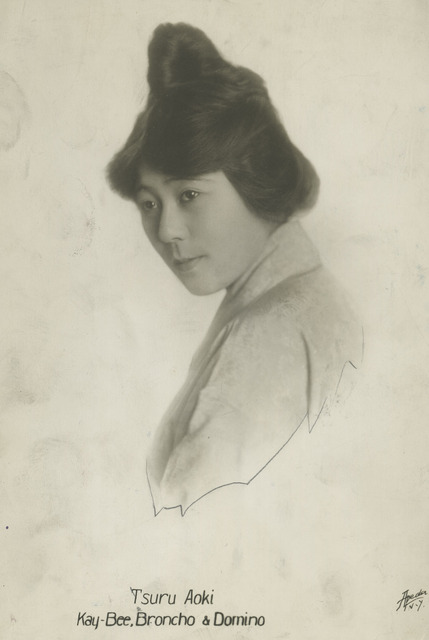 Tsuru Aoki is best remembered as the wife of Sessue Hayakawa, and certainly Aoki’s role as adoring wife on- and off-screen was extremely important to the remarkable success of Hayakawa as a romantic lead in the teens and early twenties. Hayakawa’s popularity rested on the assurance that his exotic and inscrutable Oriental exterior hid a soft and romantic side, proof of which was his “little wife.” But her star image was complex, erasing her immigrant background and presenting her as a model of assimilation, with her undeniably modern American lifestyle a sharp contrast to the diminutive Oriental “doll” aspects of her persona. 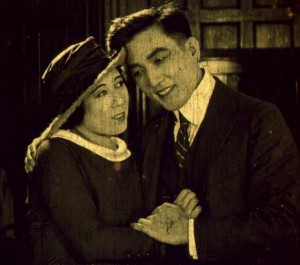 Although she often played opposite her husband, Aoki was also a significant star actress in her own right and a veteran performer who entered motion pictures before Hayakawa, at least as early as the extant 1914 Kay-Bee Western, The Death Mask/The Redskin Duel, in which she plays a Native American, which she did more than once in her career (Miyao 2007, 301). She worked on films produced by major silent era companies—the Jesse Lasky Company that would become Paramount Motion Pictures as well as Universal Motion Picture Manufacturing Company. Since she was one of the earliest professional Japanese film actresses in the United States, there is much at stake in the research that still needs to be done on her other contributions to the production process, following up, for instance, on the reference to the credit she received as supervising set constructor for The Breath of the Gods (1920). 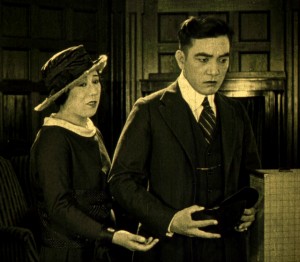 Aoki came to prominence in productions for Thomas Ince’s New York Motion Picture Corporation, where Hayakawa first appeared with her in The Wrath of the Gods, released in 1914. The film was a tremendous success and a high point in Ince’s career. As a consequence of his experience working with her on The Wrath of the Gods, Ince signed Aoki and her “company” of twenty native players late in 1913. However, sources do not specify if this company belonged to Aoki or what type of company it was, whether it was a theatre troupe or an actors’ company, for example. Aoki and Hayakawa appeared together in Jesse Lasky productions for Paramount from 1916 to 1917. Then, in 1918, Hayakawa formed Haworth Pictures Corporation in an attempt to generate roles for Asian performers that broke with the American popular stereotype of Asians—a goal that extended to roles for Aoki herself. Her work for Haworth, for instance, included a role opposite Hayakawa in The Courageous Coward (1919), in which she played a Japanese woman who tries to transform herself into a modern American girl in the mistaken belief that this is what her American suitor desires. Wid’s Weekly advertising copy for the film proclaimed that she was “delightful in her efforts to imitate her western sisters in everything from high heels to powder puffs” (6). 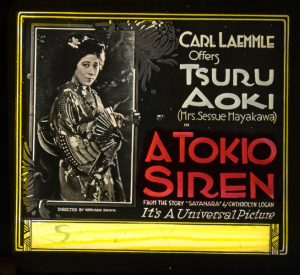 In 1919, the Los Angeles Times reported with great fanfare Aoki’s contract for three special features at Universal, beginning with a lavish adaptation of the Sidney McCall novel The Breath of the Gods, stating hyperbolically that the salary she was to be paid was “one of the highest salaries in picturedom” (III4). This is the film on which Aoki was also reported to have had a supervisory role in the design of the Japanese sets. Aoki’s American film career slid after her three features at Universal, however. It was reported that she planned to start her own company in 1920, but no evidence of this has been found to date (Pratt 108). Following a few additional titles in Hollywood, she made a handful of films in Japan and the UK, as well as La Bataille/The Danger Line (1923), written by Margaret Turnbull for Film d’Art in France. Her final screen appearance was again with Hayakawa in the war film Hell to Eternity (1960). 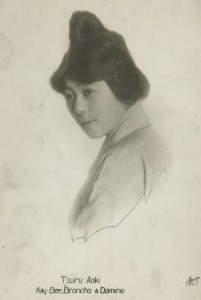 Many of Aoki’s film roles reiterated stereotypes of the Asian woman such as the innocent flower, the self-sacrificing Madame Butterfly, and the picture bride. However, as we can see in her extant films, Aoki also displays the rebellious spunk found in many of the modern female paradigms of the period. For instance, her character Toya-san in The Wrath of the Gods is an unusually self-possessed modern melodrama heroine. Toya-san rebels against paternal authority and tradition to marry her sweetheart, a European-American sailor, and sails off with him in a happy ending. Aoki’s performance as Toya-san and also as Ume-ko in The Dragon Painter (1919) reveals a performance style that has more in common with Mary Pickford than with the sort of Asian exotics played by European Americans in “yellow face” in the period. In the roles found in her existing films, she adroitly enacts girlish enthusiasm for nature, demure consciousness of romantic encounters, and rebellious indignation. Her small stature is repeatedly emphasized by framing and staging, as when Hayakawa’s character in The Dragon Painter (1919) effortlessly swoops her up in his arms and lifts her high in the air.

Aoki’s biography as a star also underscored comparisons between the actress and the doll. Her star narrative treats her move from Japan to the United States as a journey from tradition into modernity. She came to the United States at the age of six, traveling with a Japanese theatre troupe that included her aunt, the pioneering Japanese theatre actress Sada Yacco, and her uncle, Otto Kawakimi, owners of the Imperial Theatre of Japan (Berg 157). She was soon after adopted by stage designer Hyosai Aoki, and much is made of the illustrious social milieu, excellent private school education, and French chaperone with which he provided her. She met Hayakawa at the Japanese Theatre in Los Angeles, where both performed, and it is said that it was she who persuaded Ince to consider Hayakawa for film roles. As a couple, the Hayakawas were portrayed as the perfect model of cultural assimilation and balance between traditional and modern marital roles. Aoki, however, is portrayed as the more American and modern of the two, with a fondness for the latest dances and sporty roadsters. The complex blend of Orientalism and the modern woman in her persona is exemplified by a 1914 Los Angeles Times article that reports on her use of “Jiu Jitsu” to incapacitate eight burly police officers during a demonstration for the police force (117). Aoki deserves greater recognition as a pioneering Asian-American performer and as an aspiring producer, whether she worked independently as a professional or as a “domestic” assistant to Hayakawa.

With additional research by Yuan Chen.

His Birthright (1918) via the EYE Filmmuseum (Dutch intertitles)

The Courageous Coward (1919) via the EYE Filmmuseum (Dutch intertitles)

In his definitive book on Sessue Hayakawa, Daisuke Miyao states (2007, 301) that according to Yukio Hayakawa, Aoki made her debut in Hollywood in 1912 in a film directed by George Osbourne in which she portrayed a Native American. The spelling of Aoki’s first name was changed to Tsuri or Tsura in the credits of some of the films in which she appeared, which makes compiling her filmography a challenge. There is some discrepancy between FIAF and AFI in regards to the film adapted from the novel La Bataille, by Claude Farrière. FIAF lists the film La Bataille, produced by Film d’Art in 1923. AFI lists the film as The Danger Line, produced by R-C Pictures Corp. in 1924, although the difference suggests French and American releases.