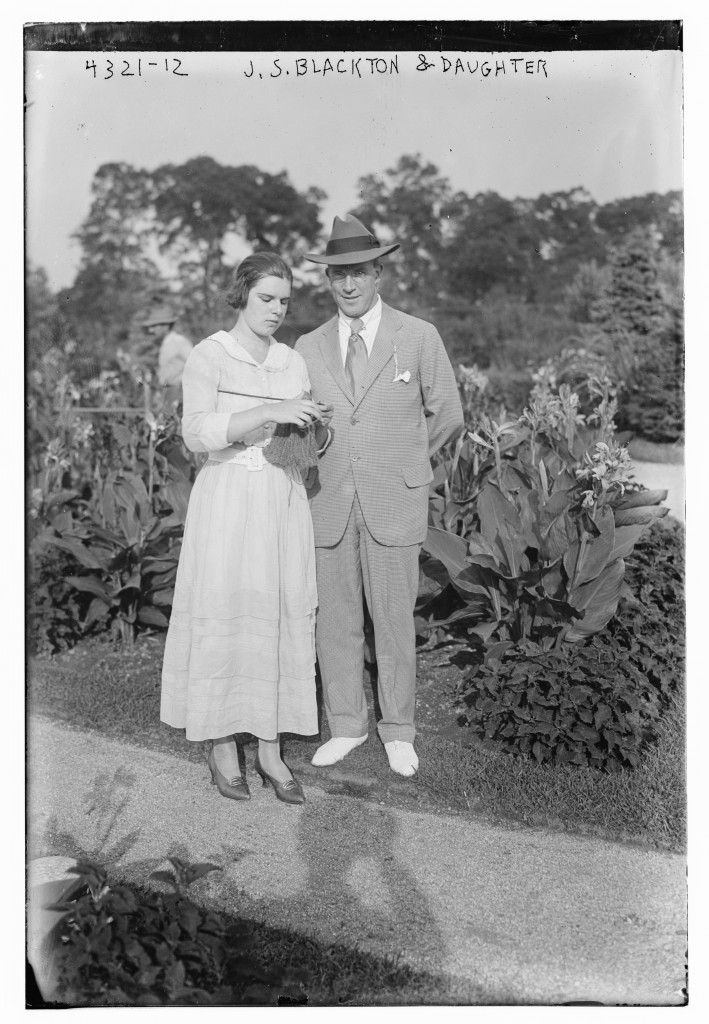 Marian Blackton worked on over fifteen films during her short career as a scenarist and occasional actress. Her father, J. Stuart Blackton, one of the founders of the Vitagraph Company, directed all but two of her scenarios. Marian Blackton became her father’s script girl in 1921, and graduated to scenario writer in 1924. Most of her scenarios were dramas adapted from existing novels or plays. 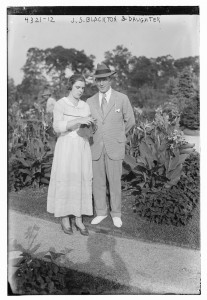 Marian Constance Blackton with her father, J. Stuart Blackton. Courtesy of the Library of Congress.

Blackton was the daughter of Isabelle MacArthur, the first of her father’s four wives. She grew up at the Vitagraph Company Studios, and thus her first appearance on screen seemed inevitable. She was watching the filming of her father’s The Life of Moses (1910), when she was spotted and sent to the costume department because they needed more extras. Blackton followed her father on location, later recalling in the biography she wrote of her father that “Location trips with my father’s company were my idea of heaven” (89). After graduating from high school, she asked to join her father, who was then working in England. As Anthony Slide explains, J. Stuart Blackton had left Vitagraph in 1917 to start his own independent company and by then Blackton Productions had a studio in London. He refused, but she went anyway, threatening, “You let me come over to England and learn the scenario business right now or I’ll join a burlesque show” (1987, 110).

Marian Blackton became J. Stuart Blackton’s script girl on The Gypsy Cavalier/A Gipsy Cavalier (1922) and also appeared as an extra, then did the same for The Virgin Queen (1923). Her first full scenario, according to the Blackton biography, was Between Friends (1924). J. Stuart Blackton was displeased with the original script, so Marian wrote her own, and she proudly recalls her father saying that it was the first script he had ever read that didn’t require a single change (52). By 1925 it was the news in the Los Angeles Times that she was adapting and writing all J. Stuart Blackton’s scenarios, and the paper praised the script for Behold This Woman (1924) for its “strength and delicacy of touch.” The same article, in addition to raving that she brought credit to the “name of Blackton” in only three years, compares her with established writers Jeanie Macpherson and June Mathis (28). Blackton adapted and wrote several more films that her father directed, including the very successful The Clean Heart (1924), as well as The Beloved Brute (1924), The Redeeming Sin (1925), Tides of Passion (1925), and The Happy Warrior (1925).

Marian Blackton seems to have quickly become a powerful figure on the Blackton Productions set. In the biography of her father, Marian recalls that they had trouble casting one part in The Happy Warrior. J. Stuart Blackton interviewed applicants and then sent them to Marian’s office so that the father-daughter team could compare notes. When they disagreed over one actor, Gardner James, J. Stuart Blackton suggested a compromise: “We’ll give him a screen test, and if he doesn’t sell himself to you, we won’t sign him” (161). This very same Gardner James became a fixture in Vitagraph motion pictures, and he and Blackton were married in 1926, as reported in the Los Angeles Times, but divorced two years later (A1). Blackton also remembers the way she influenced her father’s ideas about the portrayal of female characters and takes credits for the way they she convinced him to toughen them up. She writes, “They began to show some guts. They stopped fluttering… in short, they stopped being my father’s ‘ideal woman’.” When director Blackton reverted to his fluttery idea of women characters, Marian Blackton would remind him to stick to the script, and, she says, “To [her] astonishment, he invariably agreed” (153).

In 1925, Warner Brothers bought the Vitagraph Company. J. Stuart Blackton headed up a production unit at Warner Brothers, and Marian Blackton came with him to write the scenarios. They made four films together at the new studio—Bride of the Storm (1926), The Gilded Highway (1926), Hell-Bent for Heaven (1926), and The Passionate Quest (1926)—before J. Stuart Blackton’s unit was disbanded. Marian Blackton was next able to get a five-year contract as a writer at Metro-Goldwyn-Mayer (169). But she was only there for two and a half years before MGM bought out the rest of her contract, and in that time she only worked on two films, neither of which were assignments she liked—Becky (1927), her only comedy, and Buttons (1927), for which she worked on the continuity (173).

Blackton, however, continued to write for her father even while she was employed at MGM. Slide says that Blackton, wealthy from the sale of Vitagraph, had retired from directing in 1926, but continued to produce until he went through his money and declared bankruptcy in 1931 (27). In 1927, he had become interested in making a motion picture with a new kind of camera, in “natural vision” with color and sound, and chose “The Flag Maker” as his story. According to a news story on this camera in the Los Angeles Times, the project was renamed The American (1927), and the “well-known scenarist” Marian Constance Blackton was writing the adaptation and the continuity (B6). Unfortunately, The American was never released, she tells us in the biography (172).

In the 1930s, Marian would continue to work on various projects with her father such as his The Film Parade/The March of the Movies (1934), an extant compilation of authentic clips and reenactments in which she appeared along with other members of the Blackton family. The last time that Blackton and her father worked together was another aborted project. When J. Stuart Blackton was appointed by the Roosevelt government to head the WPA Motion Picture Project, he hired Marian to write the scenarios. Washington would choose a subject, she would write a script, and they would hire the cast and crew, but at the last moment the government office would cancel the film. This pattern continued for eight months until the entire project was cancelled (198-199).

She had small parts in two other films, Maniac (1934), on which her brother J. Stuart Blackton, Jr., worked as assistant director, and Marihuana (1936), but these appear to be her last. In 1941, Marian Blackton married the writer-actor-producer Larry Trimble, who, with American actress-producer Florence Turner, had in 1913 started Florence Turner Productions in England and, with writer-producer Jane Murfin, the short-lived Trimble-Murfin Productions in 1922. Blackton was married to Trimble until his death in 1954 (48).

There are many discrepancies in the historical record for Marian Constance Blackton. She is sometimes listed as Marian Constance, Marian Constance Blackton, Marian Trimble, and sometimes her first name is spelled Marion, though she spells it Marian in the biography of her father. Newspaper articles, AFI, FIAF, and other electronic sources differ in assigning Blackton credit. As little work has been done on Blackton, this article is heavily based on the biography she wrote about her father, which was started, forgotten, and re-written often over three decades. It depends mainly on Blackton’s memories, and is thus not the most reliable source. We have attempted to cross-reference the databases, newspaper reports, and the biography to compile her filmography. Often Marian Constance Blackton’s lack of credits stem from the fact that she appeared only as an extra or script girl in such films as The Glorious Adventure (1922) and The Virgin Queen (1923). Marian Contance Blackton is not listed as screenwriter in general reference books for Between Friends or The Beloved Brute, however two Los Angeles Times articles specifically mention her writing the scripts: “J. Stuart Blackton’s Young Daughter Wins Success in Adapting Stories to Screen.” Los Angeles Times (7 June 1925): 28 and “New Strong Man Hero Shows Up.” Los Angeles Times (17 Nov. 1924): A7.