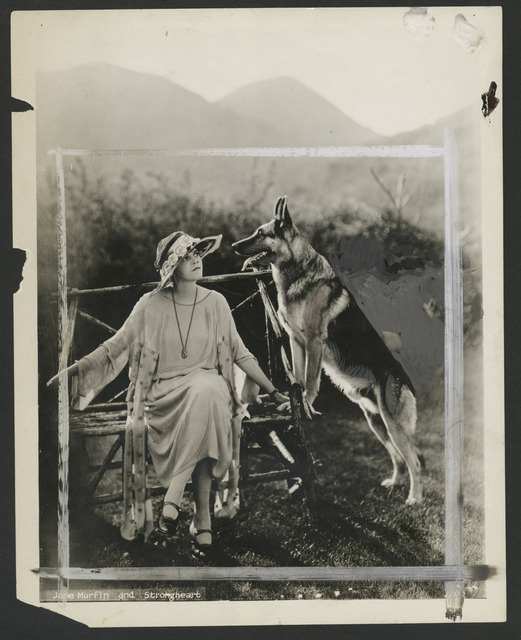 As a woman who wrote or cowrote over sixty produced films, a producer who championed strong female roles, and a Hollywood insider with a career spanning over three decades, Jane Murfin may be one of the most prolific but least known writers of the 1920s and ’30s.

Jane Murfin was born Jane Macklem in Quincy, Michigan. Her first marriage, in 1907, to lawyer James Murfin, lasted less than five years, but Jane adopted his surname and would use it—excluding the brief period in the late 1910s when she and Jane Cowl used the pseudonym Allan Langdon Martin—throughout her life. Although the 1910 US Census records list her as living as a housewife in Michigan with her lawyer-husband James, according to Murfin family correspondence from 1967, Jane moved shortly after to New York City while her husband remained in Michigan. According to the University of Michigan in Ann Arbor, James eventually became a school regent, after a long career teaching law, and even has a gate on the grounds named after him.

In 1915, Murfin struck up what would become a lifelong friendship with actress Jane Cowl. In an undated typed letter written by Cowl, she describes Murfin as the best friend any person could hope to have (Cowl Papers, Box 2, Folder 8). The two collaborated on a series of plays in the late teens, including the popular and often revived World War I theatrical melodramas “Lilac Time” (1917) and “Smilin’ Through” (1919). Evidence of their business savvy, the two retained the rights to “Smilin’ Through.” According to a 1931 Los Angeles Times article “exposing” what writers in the industry during the silent era made, Joseph Schenck optioned the play for $22,500 in 1920 as a vehicle for his wife Norma Talmadge (Schallert K7). The two women later resold the dialogue rights to Schenck while retaining the rights for radio and TV adaptations, according to a series of financial documents exchanged between Cowl and her attorney (Cowl Papers, Box 2, Folder 5). Murfin and Cowl’s early Broadway collaborations, which starred Cowl, were credited to “Allan Langdon Martin,” as the two thought Broadway producers would take their work more seriously if they believed a man had written it. Though this ruse may have initially helped to get “Lilac Time” produced in 1917, they later regretted their scheme as the play continued to be credited to the nonexistent “Martin” long after Cowl and Murfin had gained fame as dramatists, which is clear from Jane Cowl’s correspondence with her attorney (Cowl Papers, Box 2 Folder 5).

Murfin’s first motion picture scenario, Marie, Ltd., was written and produced in 1919 by Adolph Zukor’s Select Pictures Corporation in New York. Shortly after, Murfin relocated to California and made the transition from writing plays to writing primarily for film. She wrote scenarios for a number of films during the mid-1920s, primarily romantic comedies and a few dramas. In 1924, she wrote, codirected, and coproduced Flapper Wives, a May Allison drama about faith healing adapted from an unproduced Murfin and Cowl play called “The Flaming Sign.” But her biggest success in the 1920s was writing scenarios for her dog, Strongheart. 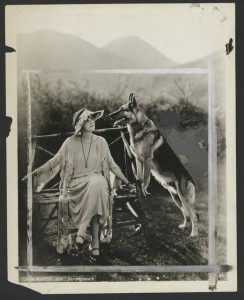 Jane Murfin with Strongheart the dog. Courtesy of the New York Public Library.

In a 1925 Los Angeles Times article, Murfin claims that her European representative purchased Strongheart. That representative was Laurence Trimble, a dog trainer and early director for Vitagraph Studios (H12). Trimble had moved to England in 1912 to direct Vitagraph films starring John Bunny and Turner would eventually leave Vitagraph to form Florence Turner Productions, churning out numerous films together. According to unsubstantiated sources, Murfin had met Trimble in New York and followed him to London in 1912, which ended his relationship with his first wife, opera singer Louise Trenton. Murfin would return to New York later in 1912, while Trimble would return a few years later at the onset of World War I. While visiting Germany just after the end of World War I, Trimble purchased a German attack dog christened Etzel von Oringer. In 1921, Murfin and Trimble formed Trimble-Murfin Productions as a vehicle to produce films for the newly renamed Strongheart (H12). Strongheart became the first true canine star of cinema, predating Rin-Tin-Tin by two years, according to Ally Acker (1991, 208).

While there is no firm record that the couple ever married—none of the articles in the Los Angeles Times or the New York Times ever refer to them as a romantic couple, and often refer to Murfin as living alone—by 1921 according to Trimble and Trenton’s daughter Jan Trimble Zilliacus, Trimble and Murfin had traveled west together, and soon shared a home in Hollywood. Among their friends were Charlie Chaplin, Rudolph Valentino, and Marion Davies. Murfin also remained friends with Anita Loos and Frances Marion, whom she had known in New York. Trimble directed the Strongheart movies and Murfin wrote the scenarios. Murfin was so devoted to Strongheart she even wrote a 1924 editorial for the Los Angeles Times discussing the importance of treating animals well on set, and mentioning the Trimble-Murfin Productions’ habit of hiring someone from the Animal Defense League to oversee the making of the film, ensuring that no animals would be harmed (A4). Murfin was always recorded as being Strongheart’s sole owner. When the dog had to stop performing after developing a tumor from burns received after falling on a klieg light, Trimble’s relationship with Murfin soured. Trimble immediately started up another relationship with Bradley King, and when that relationship too ended, he quit film and moved to an island on the St. Lawrence River, to train dogs. Ever attracted to screenwriters, he eventually returned to Hollywood and would marry Marian Constance Blackton, according to the 1999 obituary of Jan Trimble Zilliacus written by Kevin Brownlow.

Strongheart scenarios ranged from Murfin’s original stories to adaptations of famous books about dogs (such as White Fang). At the height of Strongheart’s popularity, he received a star on the Hollywood Walk of Fame, had a collected book of fan letters printed, and had a dog food line produced with his name (Strongheart Dog Food is still produced today) (Boone 1976, ix). Tragically, most of Strongheart’s films are now believed to be lost. However, a print of The Love Master (1924) featuring Strongheart and Lady Jule (Strongheart’s leading lady on- and off-screen) recently surfaced at Archives du Film du CNC in Bois d’Arcy, France, and his final film, The Return of Boston Blackie (1929)—which was not written or directed by either Trimble or Murfin—exists at George Eastman House.

Concerned about getting proper credit for film work, in 1921 Murfin became one of the founding members of the Screenwriters’ Guild. In 1933, when the Guild was reformed as the Writers’ Guild of America, Murfin was asked by her friends Marion, Loos, and Bess Meredyth to write the original rules and guidelines (Beauchamp 1997, 307). Her 1955 Los Angeles Times obituary lists Murfin as serving on numerous boards throughout her life, including the Board of Directors for the Academy of Motion Picture Arts and Sciences (4). Murfin continued to work steadily in the industry during the sound era. Later, she would become RKO’s first female supervisor and a producer at MGM, as the Los Angeles Times reported in 1931 (27). She would also marry the actor Donald Crisp. And she would gain even greater prominence in the 1930s and ’40s, cowriting scripts for What Price Hollywood (1932), The Women (1939), Pride and Prejudice (1940), and numerous other films.

2. Jane Murfin as Screenwriter and Co-Producer

2. Jane Murfin as Screenwriter and Co-Producer