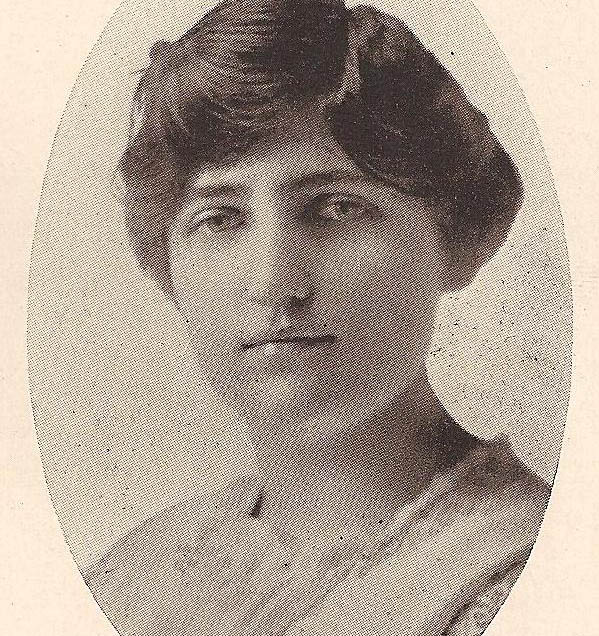 Little is known about the background or personal life of Marguerite Bertsch, who is quoted in a Photoplay biography in 1916 as saying that “I believe one’s work should speak for one, and if it cannot do that, the less said, the better” (160). We do know that she was well educated, having attended Columbia University, and that she worked as a public school teacher before joining the Vitagraph staff in New York. The same 1916 “thumbnail biography” also mentions playwright Beatrice deMille, mother of Cecil, as an early mentor. Beginning as a staff writer at Vitagraph in 1911, Bertsch had risen by 1914 to become editor-in-chief of the scenario department—succeeding Beta Breuil—where she was responsible for evaluating hundreds of scenarios submitted weekly to the company, selecting promising properties, and revising scripts, all while continuing to write her own original scenarios. Contemporary reports, like that in the New York Telegraph in 1916 emphasize her professional achievements and intellectual acumen, describing her as “a big woman mentally” and “delightfully feminine, but with the brain of a diplomat.” A 1916 cartoon in the Columbus Dispatch depicts her as a bespectacled figure taking a pen to an enormous pile of scenarios under the caption, “Margaret Bertsh [sic] is a scholarly woman.”

In interviews, Bertsch articulates both the practical principles of cinematic craft and an idealistic vision of “the future of the photoplay,” themes that she would develop more fully in her 1917 book, How to Write for Moving Pictures: A Manual of Instruction and Information. Bertsch’s approach combines traditional principles of literary and dramatic criticism with an eye to the particular demands of motion pictures, explaining the narrative functions of techniques such as close-ups, cross-cutting, dissolves, subtitles, as well as the practical economics of production. She emphasizes the importance of audience, describing the mind and the emotion of the viewer as the “instrument” that is “played” by the screenwriter (1917, 17). Rejecting stereotypes, Bertsch insists that audiences quickly tire of hackneyed plots and cheap thrills. Yet this did not mean that she took an elite view of popular motion picture culture. Dismissing stories that appealed only to an elite “view of life” that might appeal to a scenario author and to the “limited class who think as he does,” she heralded cinema as a universal art accessible to all (1917, 252). At Vitagraph, the largest of the US film production companies, during the first seven years of her tenure, from 1911 to 1918, she certainly worked on popular genre films. Bertsch adapted mystery, adventure, and even horror stories for the screen, but she told the Brooklyn Eagle in 1916 that “the mechanical thrill and the reign of horror have passed away”, rejecting what she saw as “threadbare stories.” Since she saw so many stories as hackneyed, she placed more emphasis on character as a means to a fresh approach. Thus in her manual she advised aspiring screenwriters to seek out novelty through a careful study of the faces they encountered in everyday life (1917, 181–184).

Bertsch’s original scenarios exemplify this character-centered approach, which extended to sensational melodrama narratives in which illicit romances lead to forced marriages, illegitimate pregnancies, divorce, bigamy, blackmail, suicide, or murder. As part of a studio team she knew how to develop an emotional narrative to justify expensive spectacle, as she did with The Wreck (1913), the idea for which began with the studio’s plan to wreck two trains. Bertsch developed around the disaster a widely acclaimed drama, structured around several characters whose selfish lives set them on a collision course, as they “ rush[ed] headlong into a wreck—of career, life, and train”, the New York Evening Sun reported (10). In How to Write for Moving Pictures she insisted that audiences wanted more than a “milk and sugar diet”, that “the darker side of life, the mistakes, the soul upheavals, present a light and shade… that is fraught with the keenest dramatic interest”, and that such themes treated carefully could provide “a serious, wholesome exposition of life’s facts” (1917, 19–20). In the context of these remarks about “the darker side” we can place the sensational melodramas she wrote as well as directed, but this stated philosophy does not exactly explain the gender-bending comedy fantasy A Florida Enchantment (1914), which has survived into the present, heralded as one of the most transgressive of US films from the silent era. We would want to ask if Bertsch’s concern for the moral influence of cinema led her to tone down the controversial racial and sexual subplots of A Florida Enchantment, an extant title that in recent years has become a gay and lesbian film festival classic (Somerville 51).

In 1916, Marguerite Bertsch “left her desk to take command in the studio”, first as co-director with W. P. S. Earle and then as director on her own four films, as reported in the Columbus Dispatch. But that same year the New York Telegraph reports her as saying that “I never wrote a picture that I did not mentally direct. Every situation was as clear in my mind as though the film was already photographed”, a comment that suggests a downplaying of the distinction between screenwriting and directing. Although none of her directorial efforts survive, a New York Dramatic Mirror critic in 1917 praised the “vivid quality and marked originality ” of the films she directed (52). Motion Picture Weekly in a review of The Glory of Yolande (1917), a film about a Russian peasant who becomes a great ballerina, gives the advantage to Bertsch as a woman, and mentions story author Maibelle Heikes Justice and actress Anita Stewart as well, describing “A photoplay written by one woman, directed by another and acted by a third member of the gentler sex, should be a correct and convincing revelation of character.” But the The New York Times goes further to comment on what they find atypical for a woman writer-director in The Devil’s Prize (1916). This tangled tale of illegitimate pregnancy, abandonment, and murder, both written and directed by Bertsch is acclaimed by the Times as “treat[ing] a theme at once philosophical as well as psychological, and of a nature not generally accredited to the woman writer.”

Marguerite Bertsch’s influence as writer, director, and chief scenario editor at Vitagraph was widely acknowledged in many articles, appearing in local newspapers as well as in the trade press in her day. Yet her overall career has received no consideration as yet, especially her early work for the Famous-Players Film Company. More importantly, the reasons for leaving Vitagraph in 1918 at the peak of her career remain a mystery as do the circumstances surrounding her death. The 1930 US Census records list Bertsch as a freelance writer living with her sister, brother, and father in Brooklyn, and she seems to have done some real estate investing in the New York area between the 1920s and 1940s (“Manhattan Transfers”, “Transfers in the Bronx”). At her father’s death in 1941, she was living with her sister in Union City, New Jersey (“Wills for Probate”). A recent necrology gives the date of her death as 1967 (Doyle 1999, 23). By 1918, however, Vitagraph had lost its competitive position in the US motion picture industry as they were saddled with debt incurred in 1916 in an attempt to shore up their position, and eventually they were sold to Warner Brothers in 1925 (Abel, ed., 2005, 680). Until recently it has been assumed that none of the films Bertsch worked on had survived, although prints of two 1913 films on which she is credited as scenarist, The Diver (1913) and The Troublesome Step-Daughters (1912), with intertitles in Dutch only, have been identified in the Nederlands Filmmuseum. Their presence in a European archive can be explained by Vitagraph’s aggressive overseas distribution plan, which began when the company opened a Paris office in 1908 (Abel 2005, 680).

Grau, Robert. The Theatre of Science: a Volume of Progress and Achievement in the Motion Picture Industry. New York: Broadway Publishing Co., 1914.

The Troublesome Stepdaughters (1912) via the EYE Filmmuseum (Dutch intertitles)

The Diver (1913) via the EYE Filmmuseum (Dutch intertitles)

The Reincarnation Of Karma and The Vengeance Of Durand are both extant. While the author lists Bertsch as being screenwriter on both films, none of the common sources (Braff, Spehr, AFI) list Bertsch as working as screenwriter on the films. FIAF does not credit Bertsch for: Nothing to Wear, The Tiger, A Florida Enchantment, and For a Woman’s Fair Name.