In a little yard cottage at the Vitagraph Studios in the Midwood section of Brooklyn, Mrs. Beta Breuil ran the company’s scenario department from 1910 until 1913. As the company’s first scenario editor and perhaps the first woman to assume this position in the United States, Breuil’s career was brief, but significant. Her name is attached to more than fifty produced scenarios, and she mentored several women scenario writers at the company. However, researching Breuil’s career presents problems, as she operated with at least five names: her maiden name, names from three marriages, and a nom de plume—Mrs. Beta Breuil—her professional identity. 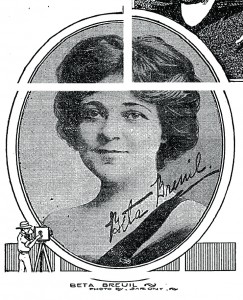 Breuil’s venture into the film business and the work sphere seems to have been caused by financial necessity. Born into privilege in New York City in 1876 as Elizabeth Donner Van der Veer, Breuil was the daughter of a lawyer, educated at the Misses Graham’s School in New York City and the Misses Virgin’s School in Dresden, Germany (Leonard 125). In 1893, the New York Times printed a wedding announcement of her marriage to Frank M. Willard, a wealthy manufacturer. However, ten years after their wedding, the New York Times ran another article with the semi-scandalous headline “Death Prevented Divorce” (1). Here, we learn that Willard had died just before the couple’s divorce had been granted and that his family and insurance company were working to prevent her from getting the insurance money.

In 1903 she was remarried, this time to Hartmann Breuil, but was soon widowed for a second time in 1908. Her nom de plume thus stems from her last name from her second marriage and an abbreviation of her first name, Elizabeth. And so, it was as a two-time widow that she entered the business. A 1916 article in the Moving Picture World describes her path to Vitagraph: “Mrs. Breuil, after much travel throughout the world, had been thrown on her own resources at an age past thirty and had tried the stage before she sought and got the position of scenario writer for the Vitagraph Company. From that she rose to the position of editor and headed the department which she organized herself” (431). It remains unclear in what capacity Breuil was first hired, as the New York Times describes her first job with Vitagraph as an assistant, but she rose fast: “In four months she was at the head of the scenario work in their studio.” The same article asserts that Breuil had 192 produced scenarios to her name in 1912 (1913, SM4). Most accounts agree that Breuil’s rise to fame was quick, due to the enormous amount of work she completed in a very short amount of time. This massive work effort was also given as the reason for Breuil’s retirement from Vitagraph in 1913, after only three years at their service, when Marguerite Bertsch succeeded her (630). Participating in the contemporary discourse about the screenwriting profession, Breuil wrote a short article in the Moving Picture World in 1913 in which she refers to the development from what we today we call the early “cinema of attractions” (“the trick pictures, absurd chases and fairy spectacles”) towards narrative design (“a real basic plot—a logical, well-planned interest-holding story”) (482). This development is also reflected in Breuil’s own work.

Certainly, Breuil seems to have had an eye for talent, as she is credited with giving the aspiring young actress Norma Talmadge her breakthrough at Vitagraph, having been thoroughly impressed by her beauty (Spears 107). Talmadge’s first role as a contract actress at that company was also in a film written by Breuil, In Neighboring Kingdoms (1910). Apparently Talmadge had not impressed the director with her acting skills, but according to Spears, Breuil had persuaded J. Stuart Blackton—the company’s cofounder—to give her a second chance (110). Breuil also wrote the Belinda series for Norma Talmadge in the title role, including, all in 1913, Belinda, the Slavey; Sleuthing; and A Lady and Her Maid, of which only the latter is extant.

In a biography of her father, Marian Constance Blackton recalls that Breuil was also the person who, rather by chance, opened the doors for Larry Trimble and Jean the Vitagraph Dog. Blackton  recounts how Larry Trimble had been “amiably, if absentmindedly, received by Breuil, assistant and only staff to the department’s nominal head, Rollin S. Sturgeon” (44). Trimble, who was researching an article, had gone to Vitagraph to do his research, when he had learned of Breuil’s problems with finding a dog who could take directions. Demonstrating his skills with dogs on the spot, having found a homeless dog on the studio lot, Trimble was invited to return with his border collie mix—Jean (46).

During this relatively brief period of time, Breuil had become a well-known and respected figure in the business, and most trade journals noted her resignation with regret, accompanied by great interest in her future plans. The Moving Picture World wrote that “she has worked constantly for the last three years without cessation and is entitled to a little ‘loafing time’ before she again gets into the traces,” adding “Mrs. Catherine Carr (…) who has been coached by Mrs. Breuil to the same modes of thought and action, remains in the staff and in time will gain equal regard in the affections of the photoplaywrights—but we are going to miss Mrs. Breuil” (630). An article in the Motion Picture Story Magazine also paints a portrait of Mrs. Breuil as a mentor for young screenwriters at Vitagraph, amongst them Doris Schroeder, and again Catherine Carr, who is described as “another brilliant graduate of Beta Breuil’s ‘scenario class’ in the Vitagraph’s little yard cottage” (87).

After leaving Vitagraph, Breuil worked freelance and was also briefly connected to other companies. The Moving Picture World reported that she was doing “splendidly” in a 1913 article written by an unnamed but clearly indignant author, who in response to a reader who “ungallantly ha[d] argued that the business of writing stories would be better if the women would keep out,” mentioned Breuil together with Hettie Gray Baker, Maibelle Heikes Justice, and Gene Gauntier as examples of good women scenario writers, concluding that “We do not believe in votes for women, but we most assuredly believe in scripts by women, yessir!” (257). In 1914, Epes Winthrop Sargeant in his Moving Picture World column reported that she had accepted the artistic management of the North American Film Corporation, adding, “She is not editor, nor is she production manager. Her undeniable talent is not limited to any particular line, but she is the artistic advisor of the corporation, bringing to her work the valuable knowledge gained through her previous connections, but here her genius for devising effects and working out ideas will have an absolutely unlimited scope, for she will have no one between herself and the company” (40).

Perhaps under contract, or perhaps as a freelance, Breuil worked on at least four titles at the Rhode Island-based Eastern Film Company during 1915–16, the flower-themed films Daisies (1915), Wistaria (1915), Violets (1916), and My Lady of the Lilacs (1916–1919). All four titles are in the collection of the Rhode Island Historical Society, and interestingly, the films’ opening credits read “by Beta Breuil, Eastern Film Company,” perhaps a clue that Breuil produced and/or directed these films as no other names are listed in the credits. My Lady of the Lilacs was recently restored, and despite missing scenes and at times severe deterioration of the film’s negative, the narrative remains intact. The silent melodrama tells the story of the artist Stanton King who is in search of a subject to paint, and finds a woman asleep under the lilac trees: “Myra Craig—with ambitions to become an author,” as the title card announces. Stanton starts painting the sleeping beauty, who is both startled and angry to be awakened by a man painting her portrait. At an exhibition, a wealthy art collector places a bid on the painting, but Stanton refuses to sell, having fallen in love with the girl on the canvas. In the meantime, Myra is invited to a “Literary Evening” in the city, where the collector recognizes her face and courts her. Stanton falls into despair when he sees the wedding announcement in the local paper, and feels an urge to return to the lilac trees where he first saw Myra. Again, he finds Myra asleep under the trees, but instead of being startled, she realizes that he is really the man of her dreams. Abruptly, the film ends happily with Stanton painting a portrait of Myra and their baby child.

The career trajectory of Beta Breuil seems to fall apart in the last half of the 1910s. A 1916 article in the Moving Picture World announced that she had been engaged by Mirror Films to do “special work on several feature pictures” (431), but like her work at Eastern Film Company and North American Film Corporation, there are few, if any, sources that describe her work there nor are there any film titles credited to her name that could give insight into her work with these companies, with the exception of the four flower film titles at Eastern. In 1918, she is listed as screenwriter on three titles, none of which are extant: When a Woman Sins, A Daughter of France, and Life or Honor?, the latter an Ivan Photoplay production; the first two by Fox Film Corporation. When a Woman Sins featured Theda Bara, and its reviews may be the last published references to Breuil. The “advertising angles” section in Moving Picture World following the review of the film serves as a fitting afterword: “Make all the use you can of the Bara name and as companion angle tell that the story is by Beta Breuil, who wrote some of the greatest Vitagraph stories a couple of years ago” (1780).

Assembling the filmography of Mrs. Beta Breuil has been difficult, as her career started before the copyright law in 1912. Further complicating the matter are the numerous alternative spellings and misspellings of her name. Her first name is often misspelled as Betta, Botta, Bertha, Berta, and Breta while her last name is often misspelled as Brevil, Breil, and Breul. The best resource to assemble her filmography from has been the Vitagraph Bulletin and Braff. The 1912 title The Professor and the Lady is credited to Breuil in Braff, and does not have an entry in FIAF. However, the 1912 Vitagraph Bulletin credits Breuil with the longer title The Professor and the Lady and Aquatic Elephants. While this title does not appear in FIAF, either, a 1913 Vitagraph title Aquatic Elephants does appear as extant in the BFI National Film and Television Archive, and while it is likely to be the same title, I have listed the film as nonextant here until the opposite can be confirmed.

The biography of J. Stuart Blackton referenced in the above article is cited as written by "Marion Blackton Trimble" (her married name) whereas the link to her profile on this project refers to her as "Marian Constance Blackton" (her professional name).