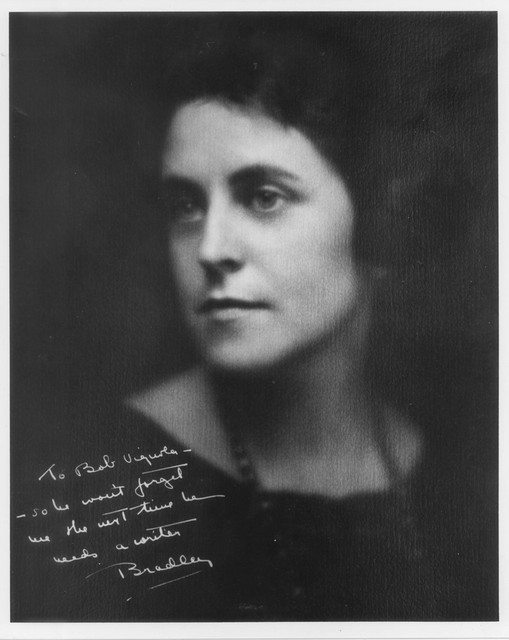 During the preliminary research that culminated in my volume Talbot Mundy, Philosopher of Adventure (McFarland 2005), I investigated the anomaly of the book Her Reputation, titled The Bubble Reputation in the UK, Mundy’s sole literary collaboration as well as the only book he wrote with a “photoplay edition” motion picture tie-in. Who was his coauthor, Bradley King? The standard references offered only a long list of credits. The Academy of Motion Picture Arts & Sciences had two clippings, revealing that “Bradley” was not a man, but an attractive female brunette. County and city legal records were the next recourse, and other bits came from brief mentions in articles and papers, found as I began researching a biography of producer Thomas Ince (1880–1924). From this research I realized that, despite King’s obscurity today, she ranked as one of the leading female screenwriters during the 1920s and 1930s. 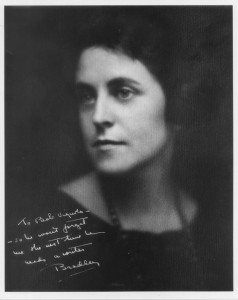 Bradley King was born Josephine McLaughlin in 1894. Daughter of a physician, she was educated at Sacred Heart Convent in New York City. Articles about her report that she stood five foot three inches in height, with brown hair and blue eyes. Her brother Barnum Brown later served as the head of the dinosaur department of New York’s American Museum of Natural History. Young Josephine initially wanted to be an actress, but, according to the Los Angeles Times, failure to achieve this goal led to a job as a stenographer for a motion picture scenarist who paid her $10 a week (20). When the writer stalked out of the studio one day — taking the script of a production that was ready to begin—Josephine suggested that the director use one of her own stories (Winship 63). By 1916 she was writing scenarios under her own name at the Lubin Manufacturing Company in Philadelphia, then in 1918 began to author love stories for prominent magazines under the name Bradley King.

She lived in San Diego for two years, where her naval officer husband was hoping to become an actor. She returned to motion pictures in 1920, working for a variety of companies until summoned that August by Thomas Ince; her contracts with him survive in the Ince papers at the Library of Congress. He initially signed her to a long-term contract at $100 a week. The ability to learn continuity writing and dramatic structure and to adapt to any genre soon made her the most important Ince scenarist. By late 1924, her salary advanced to nearly $700 a week. She also began writing for the stage, including a theatrical adaptation for Ince of her script for A Man of Action (1923). Her Reputation, King’s only “book,” was actually Talbot Mundy’s novelization of her script, written to add market appeal to adaptation-minded filmgoers. For the work, both received an equal weekly salary, although King was by then earning a $1,500 bonus for each original story. Later, Mundy recalled that King “‘thought’ in terms of tabloid scare-heads,” doubtless because of her talent for writing melodrama (letter to Rose Wilder Lane, June 25, 1934). King and Mundy had been brought together by mutual friend Larry Trimble; King held a financial interest in Trimble’s Strongheart dog pictures, and subsequently King and Trimble became romantically involved for two years.

In addition to her credits on completed Thomas Ince productions, King scripted many of his unproduced projects. Among these was The Just and the Unjust, an adaptation of the popular 1912 Vaughan Kester novel that was to have been helmed by Ince’s primary director, John Griffith Wray. King and Wray finally filmed it in 1926 at Fox Film Corporation as Hell’s 400, starring former Ince player Margaret Livingston. After Ince’s death in 1924, King began freelancing for various studios, making $10,000 for a single script, and easily made the transition to sound films, with over twenty feature film writing credits in the sound era. On October 6, 1928, King and Wray married. As she explained, the two had disagreed about many love scenes in the past while under Ince, but after working at different studios, they began to miss one another’s company. She briefly changed her name to Bradley King Wray. John Griffith Wray had just completed his first “talkie” production when he died of appendicitis at age forty-seven on July 15, 1929, leaving King his estate of $100,000. A newspaper morgue of clippings at the University of Southern California Special Collections Library recounts details of the brief marriage. 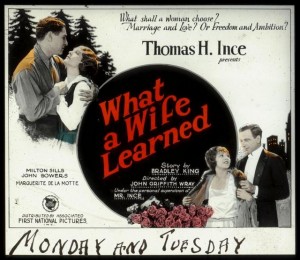 Lantern slide, What a Wife Learned (1923). Courtesy of the Museum of the Moving Image.

King spent much of the time after Wray’s death traveling, hoping to improve her own poor health. While she was in Honolulu developing a screen epic based on the ancient peoples of Hawaii, she met George Hiram Boyd, a thirty-six-year-old building contractor who had previously been a stage entertainer. They were married October 31, 1930. Although King was raised as a Catholic (and her mother was a Quaker), this marriage was conducted by Reverend Ernest Holmes, Divine Science Minister of the Institute of Religious Science—better known as “Science of Mind.”

King worked steadily through 1937 on a variety of genres, then found it impossible to continue to create, after Boyd lost her entire fortune of $400,000 in failed investments and further refused to work altogether. In 1940, she divorced Boyd and returned to screenwriting in 1947 for one final motion picture, That’s My Man (1947). Subsequently, King vanished from the film industry, and not even the date of her death is known. She is absent from modern Hollywood histories, and while most of her sound films exist, nearly all of her roughly forty silent feature films are lost today. Her only major extant silent movie, Anna Christie (1923) starring Blanche Sweet, has been forgotten in favor of the 1930 Greta Garbo remake.

All credits attributed to Josephine McLaughlin do not appear in Braff or the AFI catalog, but are referenced in Paul Spehr and the Library of Congress Copyright Office records. USW only has the second reel of Lying Lips.