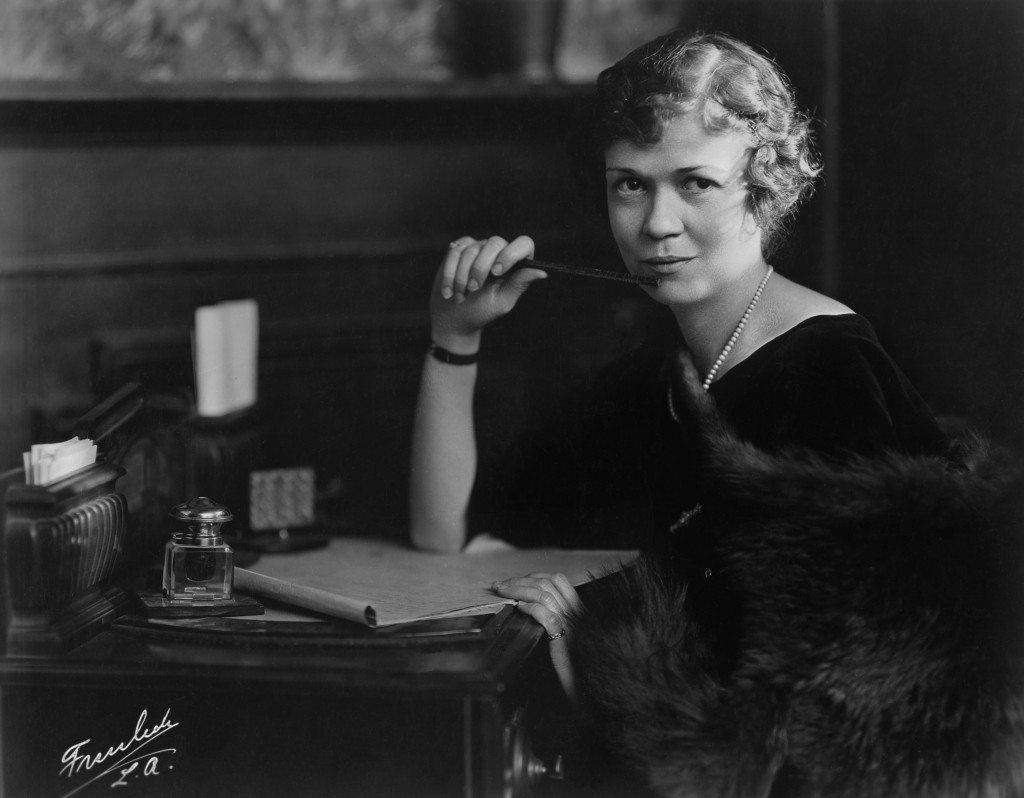 The life and times of Hope Loring, scenarist and wife of her collaborator, writer-producer Louis “Buddy” Lighton, are mentioned in the margins of Hollywood history. Loring, however, cuts a colorful, memorable figure in the few texts that mention her. Elia Kazan, in his autobiography, deems her petite and asexual (252), and W. C. Fields reportedly did not like this “fast-talking” woman (Curtis 199). However, in her autobiography, screenwriter Frederica Sagor Maas gives us more insight into the couple’s marriage and working relationship than gossip columnists would dare:

Hope Loring, a manipulator and fast talker… had a heart condition, which she played up to the hilt. It won her B. P. [Ben Schulberg]’s sympathy and helped her control her Buddy. She was the brains of their writing partnership. He needed her and could not afford to lose her (149).

But while some, like Maas, could not abide her, Loring had allies in the film community. One was Mary Pickford, who in 1937 married Buddy Rogers (Carey 217), at what as one society page referred to as “Hope Loring’s home” (Kendall A7). Loring not only wrote for some of the top stars in Hollywood, such as Pickford, Clara Bow, even Gary Cooper, but was written about along with them. 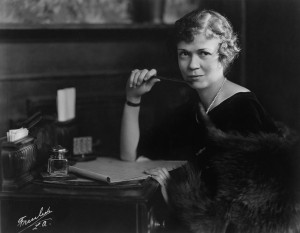 Hope Loring at her desk. Courtesy of the Academy of Motion Picture Arts and Sciences, Margaret Herrick Library.

Hope Loring’s early life proves something of a mystery that we must puzzle together to produce a time line. From a 1919 article in the Moving Picture World, we learn that she was born in Barcelona to an Irish father and Spanish mother, but was orphaned as a baby after her parents were killed in a car accident. Hope’s aunt moved Hope to England at two years old and to the United States at the age of five (n.p.). Hope’s coming-of-age is not well-documented, but an item in the Los Angeles Times society page from 1922 gushes about how Hope Loring the writer “achieved no little fame as a dancer” and, further, that “[i]t was real dancing, not the shimmy, jazz or any of the numerous flapper varieties” (“Writes” III31). According to a 1925 Los Angeles Times article that provides us with the most biographical detail, before she arrived in Los Angeles, she worked in Florida as a drama critic and as a film extra in New York (Williams 26). Perhaps during these years Loring was loathe to reveal her true age to journalists, though a voting census from 1916 has a “Hope Loring” already registered in Los Angeles county (she will be registered in this county up through 1942), meaning that if she was at least twenty-one in 1916, she would have been in her thirties by 1925. Furthermore, a New York Times article from 1914 reports the scandal of one “Hope Loring,” a young dancer with a small child bringing suit against her homicidal jilted lover (3). One wonders if this Loring is the same woman who would later become a Hollywood insider. The parallels are striking—both the plaintiff in the case and the screenwriter were single mothers. The finding aid for the Lighton Family Papers at the University of Arkansas-Fayetteville states that the Patricia Lighton who survived her mother is Loring’s daughter from a previous marriage. Maas confirms that Loring was on her second marriage with Lighton (Maas 149), and Kazan maintains that Lighton had no children (Kazan 253). 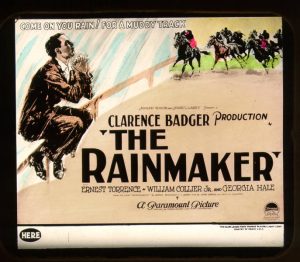 The Lighton Family Papers at the University of Arkansas-Fayetteville not only contain Loring and Lighton’s 1920 marriage announcement, but many of her husband’s notes and papers. Loring is mentioned in a few select documents, perhaps the most illuminating of which is a letter from William to Laura Lighton. Louis’s father William writes to his wife on Monday, April 19, describing Louis and Hope’s impromptu City Hall wedding that had occurred that very day. In his letter, Mr. Lighton praises Loring’s creative gifts and “practical genius,” and, tellingly, says that “her work and his will be together. She has helped him beyond telling in giving him a settled confidence in himself.”

In the years prior to their 1920 marriage, Loring had accrued scenarist credits on such films as A Society Sensation (1918) and Lure of the Circus (1918–1919). She was also working at Universal Pictures as the head of the serial and short reel department. Although she was only beginning her Hollywood career, news about her had already been picked up by local entertainment and gossip columnists. In 1918, a piece in the Atlanta Constitution runs: “Hope Loring, that clever young miss who turns novels into photo dramas, believes in living up to her name. On the door of her office at Universal City she has reversed that famous line on the entrance to Hades by printing ‘Who enters here finds hope’” (C7). 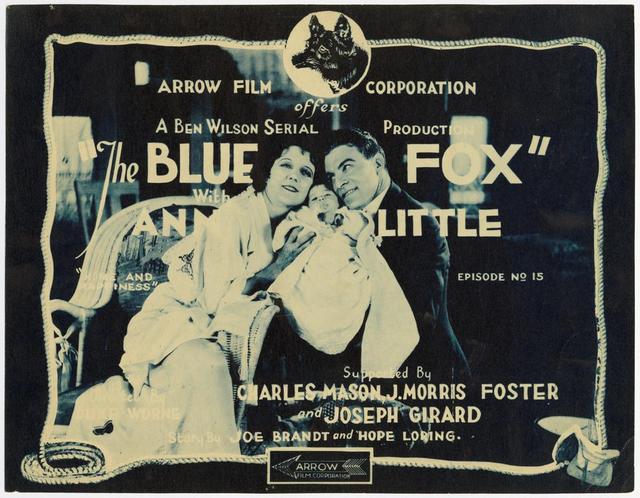 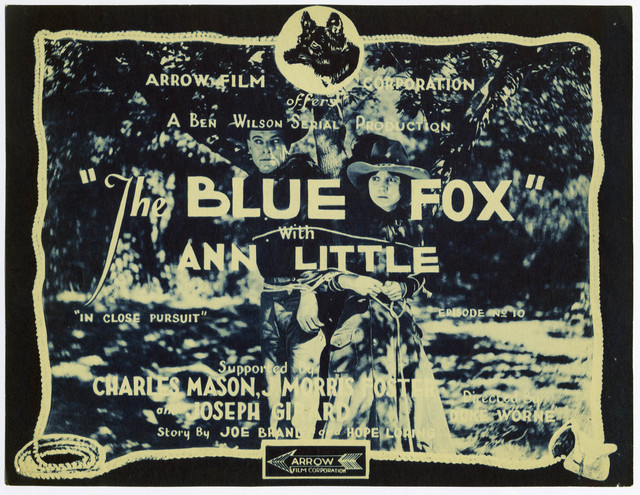 Lantern slide, The Blue Fox (1921), Hope Loring (w). Courtesy of the Museum of the Moving Image.

Hope and Louis struggled to succeed in the early years of their marriage. We know this at least from Maas’s description that they began their married life in a studio apartment on Fairfax Avenue and Sunset Boulevard, riding the bus because they didn’t have money for a car. In her estimation, they were “a couple of mediocre writers on the low end of the totem pole” (149). By the end of 1920, Loring had left her responsible job at Universal Pictures, then working under General Manager Isadore Bornstein, which we know from the Los Angeles Times headline “Hope Loring Resigns.” Not surprisingly, the article mentions that after her honeymoon, Loring would continue to write feature pictures on a freelance basis (III4). The couple would go on to collaborate on at least thirty feature films.

Journalists of the period were always interested in reporting on creative couples, and writers in particular, paying special attention to the way in which the couple balanced domestic and professional duties. In addition to the most visible husband-wife writer teams such as Anita Loos and John Emerson, there were Mr. and Mrs. George Randolph Chester (Lucille Chester), Agnes Christine Johnston and Frank Mitchell, Sarah Y. Mason and Victor Heerman, Bess Meredyth and Wilfred Lucas, among others. The Louis Lighton and Hope Loring collaboration was one of the longest. A Los Angeles Times piece from 1925 titled “Silence Being Golden, Two Scenarists Work Out Own Ideas Without Conference” describes their custom of each buying the other a gift after they finished a screenplay. In this same piece, the author sums up the couple’s routine, with the separateness of their tasks mirroring the ideal household in which man and wife each focused on their own circumscribed responsibilities: “Miss Loring writes a pictorial synopsis of the story, just as she visualizes it on the screen. Lighton writes his version…. Not a word of conversation relative to the story passes between the coauthors until each has read the other’s synopsis. Then, in their own words, “the fireworks start” (C28).

Additionally, a 1925 article entitled “Loring-Lighton Scenario Team Combines Work With Romance” contains Loring’s screenwriting method and philosophy, laid out in three points. First, “the business of writing must be learned.” Second, “get practical experience,” and third, consider budget. She explains, with reference to what she learned as a supervisor at Universal, that writing an expensive sequence “appears to me to be criminal” (Williams 26).

Loring worked on some of the most popular and successful vehicles of her time—including It (1927), an adaptation of Elinor Glyn’s popular book, and Wings (1927), which won the Academy of Motion Picture Arts and Sciences award that year for Best Picture. Her final credit was as a contributing writer on Once a Sinner (1931). Lighton would go on to produce Elia Kazan’s A Tree Grows in Brooklyn (1945) (Kazan 233) and films starring James Stewart, Orson Welles, and Rex Harrison, for instance, in the starring role in Anna and the King of Siam (1946). The couple eventually retired to Mallorca, Spain. Loring died in 1959 and her husband four years later.

“And The Greatest of These is Hope: Hope Loring, Scenarist, Confessing Startlingly on Eve of Going Abroad on New Universal Serial.” Moving Picture World (28 June 1919): n.p.

2. Loring as Writer and Actress

As with almost all screenwriters, dividing credits into distinct categories is nearly impossible. Hope Loring often shares credits in compiled filmographies with such writers as Booth Tarkington, Howard Hawks, George Marion Jr., and Julian Johnson, who were the source authors, while she was the sole scenario writer. Loring also wrote a serial, titled The Great London Mystery that was produced in the UK. A few reels exist, but are held by a private collector.

November 2019: Recent information concerning Hope Loring's place of birth has come to our attention, revealing that she may have been born in the United States and not Barcelona, Spain (a likely self-promotional, or studio-prompted, origin story). Census records and passport applications indicate that she was born in Iowa. For more information, please see: https://www.flickr.com/photos/puzzlemaster/47997273256/.