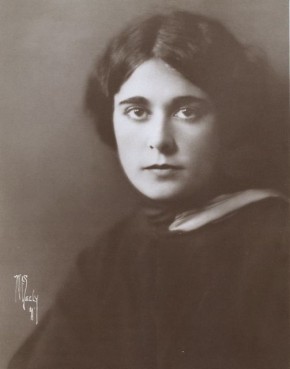 Frederica Maas first contacted the Women Film Pioneers Project in the late 1990s. She had just completed her autobiography, The Shocking Miss Pilgrim: A Writer in Early Hollywood, which chronicles the vicissitudes of her career from the silent period into the sound era. In the course of a remarkably frank narrative, she offers various explanations for her professional disappointments. These include bad luck, bad decisions, and bad timing; however, it is finally the assignment of screen credits that had the most lasting impact. Maas tells us that “writers in those days had little redress. The Writers Guild was new and not powerful… [T]he last writer to be hired to do a re-write got the credit… [I]t wasn’t right and it wasn’t fair, but that was how Hollywood operated” (67).

For writers, the assignment or non-assignment of screen credits can seriously affect one’s livelihood; for film scholars, it muddies the question of how we determine the accomplishments of a single individual in what is essentially a collaborative business and art. In Maas’s telling, she once received sole credit for Dance Madness (1926), a film on which she did little work; she was not credited for the early Norma Shearer films that she says she wrote; and she was belatedly given shared credit for The Waning Sex (1926), although this is not reflected in the American Film Institute catalog.

Maas was born Frederica Alexandrina Sagor on the Lower East Side of Manhattan to Russian immigrant parents. She enrolled at Columbia University in 1917 to study journalism and worked as a copy girl at the Evening Globe for two summers. In 1919, she took a job as assistant to the story editor at Universal in New York, and was promoted to story editor in 1923. A year later, she set off for Los Angeles to try her luck as a screenwriter. There, she wrote the screenplay for The Plastic Age (1925) based on a novel that she had acquired while at Universal, only to have it rejected by Carl Laemmle for being too “dirty” (46). The screenplay was subsequently bought and produced by her friend and former colleague, B. P. Schulberg. Emerging actress Clara Bow was cast, and the film’s success allowed Maas to secure a three-year contract with MGM starting at $350/week.

What should have been the start of a promising career turned out to be the beginning of a downward professional spiral. With Dance Madness (1926), Maas experienced firsthand the vagaries of screen credit assignment—but for the first and only time to her own advantage. The story had been adapted for the screen by Alice D. G. Miller. Maas made a few changes, which in her own estimation were not significant; however, as the last writer on the project, she received full credit (67). Thereafter, she was not so fortunate. She says: “I wrote every one [of the early Norma Shearer pictures] and received credit for none…The worst part was that there wasn’t a blasted thing I could do about it” (74). The Waning Sex (1926) was to be Maas’s final credited screenplay for MGM, but only at great professional cost. She wrote the bulk of the screenplay, but another writer, F. Hugh Herbert, was initially given sole credit. Devastated, Maas complained to the producer, Harry Rapf, and finally received shared credit, but was still fired from MGM for requesting to be transferred to another producer’s unit (106–108).

Unfortunately, at the present time, no other sources can be found to corroborate or challenge Maas’s recollections. In-depth research—locating accounts by others involved in the production of those films, for example, or papers (if they exist) left by Maas’s colleagues and friends, such as Henrietta Cohn (secretary to Ben Schulberg at Paramount) or Madeline Ruthvin (secretary to Rapf at MGM), or talent and literary agent Ruth Collier—would be required to further flesh out the politics of credit assignment in the later silent period.

In recounting her one year, 1927–1928, at Paramount, Maas simply says, “I worked on four stories… It, Red Hair, Hula [starring Clara Bow] and Rolled Stockings [starring Louise Brooks]” (147). Yet, Rolled Stockings is the only title for which she is credited in the American Film Institute catalog. Given that Maas herself does not discuss the screenwriting credits for these stories, and that she describes her contributions to all four films with only the single, uninformative phrase “worked on,” it is difficult to determine exactly what her contributions were. Maas had, however, previously written the script for a Bow film together with Eve Unsell, The Plastic Age; she also socialized with the actress (75–6); so she may have played a part in helping shape the actress’s on-screen persona. This brings us to the question, by no means limited to Maas, of how film scholars handle the activities of those who contribute to a collaborative process outside of conventional and “credited” positions, such as “screenwriter,” “director,” etc. Today, stars are surrounded by an army of paid personnel including publicists, stylists, and agents whose combined efforts create the star, who is in turn credited by name on screen. While I am not suggesting that Maas functioned in any of these capacities, her narrative, and the questions it raises, highlight the limited usefulness of that most basic of historiographic tools for the film scholar—film credits.

Maas married fellow screenwriter and producer Ernest Maas, and the two worked together on several projects, many of which remained unrealized. They left the industry after their serious script, “Miss Pilgrim’s Progress,” about the advent of the typewriter and its effect on women in the workforce, was subjected to “brutal disfigurement” to become The Shocking Miss Pilgrim (1947), a Betty Grable musical (239). Frederica Maas began writing her autobiography in 1988, at the age of eighty-eight.