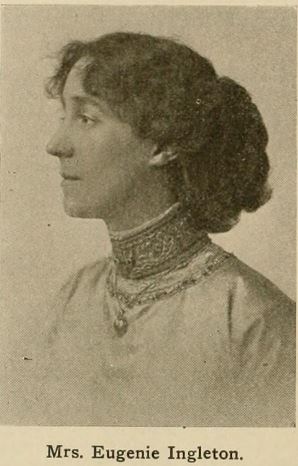 Although Eugenie Magnus Ingleton established her reputation as a scenario editor and writer at Universal Pictures between 1916 and 1917, before she arrived in the United States, she had several exciting careers on two continents—from Britain to South Africa.

The most complete biographical information about Ingleton is found in a 1915 Moving Picture World article featuring her as the reference librarian at the World Film Studio in Fort Lee, New Jersey. In this “interview,” which she may have written herself, she reveals that she was not only a nurse and newspaper correspondent during the Boer War in South Africa, but worked for the British Secret Service. In London, where she was born, she says, she began on the stage playing Little Eva in “Uncle Tom’s Cabin” at ten years old and continued, playing one hundred and four leading roles in a London stock company. Thus it was that she came to the United States to perform, first in New York then Chicago, where theatre impresario William A. Brady was one of her managers (662). It may have been through Brady that she arrived at the World Film Corporation, which Anthony Slide tells us evolved from a 1914 venture to film the successful Shubert-Brady theatrical productions as the Shubert Film Corporation (Slide 1998, 235). The idea was to promote the film versions as costing as little as ten cents as opposed to the $2.00 a Broadway production could cost (Spehr 1977, 86). Ingleton’s early credits list the producer as either William A. Brady Picture Plays or Shubert Film Corporation, but these companies were merged in 1915.

The fact that Ingleton describes work on a scenario for a five-reel production of Irish melodrama dramatist Dion Boucicault’s 1868 “After Dark” suggests that the companies did not just film stage play performances, but that they rewrote these productions for motion pictures. Further, in the Motion Picture World article, she says that her adaptation work on “After Dark” involved an updating from London to contemporary New York and from the Crimean War to the Spanish-American War (662).

From Ingleton’s description, she was working in January 1915 at the new Paragon studios, recently acquired by the World Film Corporation. Describing the library of the reference department that she started there, it is clear that she anticipates the needs of directors looking for ideas for costumes and scenes, so she collects sketches that might be used as visual reference for period films or particular locations (662). According to Slide, the studio World Film had taken over was the largest on the East Coast, and, as part of the expansion, Lewis J. Selznick had been hired as general manager and vice president in 1914, although he left in 1916 to form Lewis J. Selznick Productions, taking the company’s leading star, Clara Kimball Young, with him (1998, 235). Ingleton would have overlapped with Young, who appeared in Trilby (1915), one of two scenarios Ingleton wrote—the other, The Ivory Snuff Box (1915)—directed by Maurice Tourneur. She herself left in 1916, her arrival at Universal Pictures in August announced in Motography (512).

At Universal, Ingleton, beginning with Circumstantial Justice, released September 1916, wrote around thirty features and shorts. Cooper says that Ingleton was one of a very few female department heads in the 1916–1917 time she was at Universal, and, what is more unusual, she ran the scenario department with Eugene B. Lewis. Cooper says that at that time, of the fourteen staff writers, five were women. Motion Picture News in December 1916 names twelve, including Lewis and Ingleton, one of whom is Bess Meredyth. The article announces as well a significant change in the work of the studio writers and by implication the function of the scenario department. With a reduction in the number of “reading staff” who evaluated outside scenarios, more scripts were to be written by studio writers who would have been on payroll (4027).

In 1920, the Ladies’ Home Journal mentions Ingleton as one of those scenario writers who had occasionally directed, remarking that “Now and again a woman scenario editor would direct a picture.” Listing her along with Jeanie Macpherson, Ruth Ann Baldwin, and Elsie Jane Wilson, the author refers to her as “scenario writer and afterward director” (140). This is somewhat of an exaggeration, however. Macpherson directed one film, The Tarantula (1915), quite by accident early in her career, and for the next decade was a screenwriter at Famous Players-Lasky, where she never directed. There is no evidence that Ingleton directed more than one five-reel feature, The Birth of Patriotism (1917). Cooper explains Ingleton as an “exception to the rule” that at Universal, women began directing shorts before they directed feature films, even the most accomplished and prolific feature director Lois Weber. It is his theory that Ingleton was recruited to direct The Birth of Patriotism, a Special Attraction mounted as part of the war effort, because it was set in London, and she would have been the most knowledgeable person about British culture at the studio (142).

According to Cooper, the Universal Weekly says of Ingleton that she “has already shown her skill in a short picture,” by which they must mean that she wrote many (142). And further, Cooper states that the house organ refers to The Birth of Patriotism as “her first important photoplay,” based on a Saturday Evening Post story (142). He also sites the Universal Weekly’s enthusiastic coverage of the production of The Woman Who Would Not Pay (1917), a film in which a husband takes revenge on his wife and her lover by suffocating him in a safe. “Three clever women combined their work,” says the Weekly, citing Ingleton’s job as writer with actress Cleo Madison and director Baldwin. Ingleton would write two more films that Baldwin directed that year—The Storm Woman (1917) and When Liz Lets Loose (1917). Both of these were produced as part of the Victor Company, started by Florence Lawrence and Harry Solter in 1912 as one of the small companies within Universal integrated into the company by 1914 and phased out in 1917 (Slide 1998, 221).

In retrospect, Ingleton’s career followed the rise and fall of the “Universal Women”: at their productive high point in 1916 and gone from the company by 1917. Her next credits are for Triangle Film Corporation, which produced Because of a Woman (1917) and The Answer (1918). She adapted the George Barr McCutcheon novel as Black Is White (1920) for Thomas Ince. Her last credit is for the Fox Film The Kiss Barrier (1925), suggesting that her motion picture career was effectively over at age thirty-nine.

Below the Surface. DVD. (Grapevine US)

Below the Surface (1920) via the EYE Filmmuseum (with Dutch intertitles)

Somebody Lied (1917) is available on Amazon Prime (through Harpodeon)

Ingleton may have also produced. Moving Picture World credits her with writing and producing Avarice. The Model is not in standard sources, but the scenario is copyrighted at Library of Congress to a “Mrs. Ingleton.” Ingleton’s name is usually left off of McTeague, however, she is credited in Variety reviews of the film in 1916. Ingleton is credited on IMDb with writing The Imposter, 1915 and The New South, 1916, however, neither of these titles can be confirmed in any other source. She is often credited as E. Magnus Ingleton.

Recent research by Luke McKernan, based on details provided by a relative of Eugenie Magnus Ingleton, sheds light on her pre-film industry life in the United Kingdom. Prior to coming to the United States, Eugenie (born Anne Eugenie Magnus) was married to Frederick William Watkins. The couple married on December 28, 1896, and he eventually became an actor with the stage name Fred W. Leonard. The couple had one son in 1897 (listed in the birth notice under “Leonard”). It is unclear what happened to this son. In the 1901 census, they are listed as Fred W. and Eugenie Leonard, theatre professionals, living in Kirkdale, Lancashire. They appear to no longer be together by the 1911 census (she's back to using her maiden name and listed as widowed, although Fred is alive and living with another woman).

On December 9, 1911, Eugenie Magnus, aged 34 (listed as married and an actress) came to the United States, departing Southampton for New York, as a first class passenger on board the S.S. Minnewaska. It is unknown where she met George Ingleton, an eventual film actor and writer, who likewise immigrated to the United States in 1911 (from Scotland on the “California”). Most likely, the two met in New York, although it is unclear whether or not they were ever officially married. A later trip in 1913 (on the passenger ship “The Philadelphia”) from Southampton to New York calls them married.