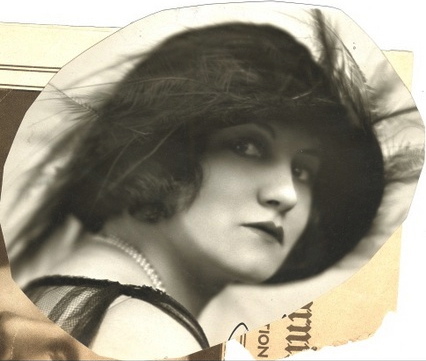 Ouida Bergère was perhaps best known in the film industry as Mrs. Basil Rathbone and party hostess extraordinaire. However, before her marriage, to Rathbone, Bergère was a prominent and top paid scenario writer. Bergère was born in Spain, but moved to the US at the age of six. Her father was French-Spanish and her mother, British (Lowrey 1920, 22). There is some conflicting information regarding her birth name; most sources claim she was born Ida Bergère, others Eulalia Bergère. Regardless, upon entering the film industry, she changed her name to Ouida. 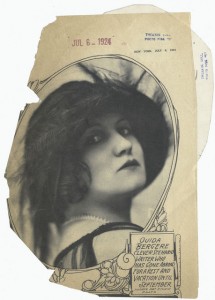 1924 Ouida Bergère clipping with caption: “Clever scenario writer who has gone abroad for a rest and vacation until September.” Courtesy of the New York Public Library.

Bergère began her film career by serving as scenario editor and actress for Pathé Freres, eventually writing her own scripts and branching out to other companies, including Vitagraph and Famous Players-Lasky, according to the New York Dramatic Mirror in 1915 (24). Much of Bergère’s screenwriting career coincides with the career of her second husband, George Fitzmaurice, to whom she was married before Rathbone. She met Fitzmaurice after she started her screenwriting career, and after their marriage, he directed almost all of the films she wrote. As is the case with the many Hollywood marriages, Bergère’s relationship to Fitzmaurice must be considered when discussing her career, and, typically, because her career was so closely linked to that of Fitzmaurice, there is confusion about their credits. She very well might have had her hand in directing some of the films that have been credited to him, as was the case with other couples such as actress Alice Terry and director Rex Ingram. Conversely, Ouida Bergère is assumed to have been the screenwriter, simply because Fitzmaurice directed, as in Cytherea (1924), which is credited to her in her New York Times obituary although not elsewhere (83). The exact dynamics of husband-wife teams working in the industry are now difficult to assess, but we now look to clues such as the article on the production of The Cheat (1923)—a remake of DeMille’s 1915 film—in the Morning Telegraph where it is mentioned that, as always, Bergère would be present during shooting (5). In another Morning Telegraph article, Bergère claims to have directed several scenes, explaining to the reporter that “Once when Mr. Fitzmaurice, my husband, was ill, I directed ever so many scenes in a picture on which he was working” (2). 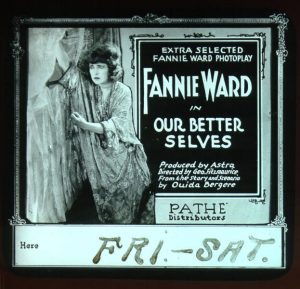 We receive some insight into Bergère’s idea of scenario writing in Dorothy Day’s 1924 article, strangely titled “Ouida Bergère Wants to be Barriesque,” perhaps a reference to British writer J. M. Barrie, author of “Peter Pan.” By “Barriesque” is meant working with the director to develop “a simple and life-like story” (2). Bergère’s desire to move in a new direction may reflect the lukewarm reviews that the popular and trade press gave of her stories. Most of her scenarios were adaptations from stage or novel and were generally accepted as standard, but not exceptional film fare. The films for which she wrote story and scenario, such as The Hillcrest Mystery (1918) and The Profiteers (1919), were criticized as unoriginal. By 1924, near the end of a productive career, Bergère was best known for her flamboyant style and exotic stories, as Day argues, rather than for simple stories. Critically, Bergère’s stories succeeded the most when the extravagance of the narrative matched that of the production values for which George Fitzmaurice was known, as in Arms and the Woman (1916), which was referred to as “uncommonly interesting” and a “smashing dramatic” by Variety (29). She wrote mostly dramas, with just two known comedies, More Trouble (1918) and Three Live Ghosts (1922). Her dramas tended to be high in action, centering on war, crime, drugs, and social issues, typically with a romantic subplot. One of her best-known films is a remake of Cecil B. DeMille’s 1915 film The Cheat (1923), starring Pola Negri in one of her first roles. Some of her extant crime dramas are Idols of Clay (1920), Kick In (1923), and The Man From Home (1922), all collaborations with George Fitzmaurice. The fact that they were all distributed by Famous Players-Lasky–Paramount Pictures, the biggest of the US production-distribution companies in those years, may explain their survival. 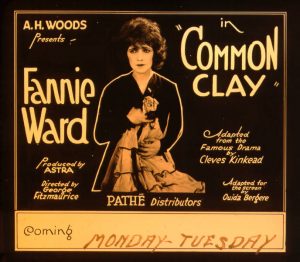 Despite her status in the field and the top salary she was receiving as a scenarist, Bergère gave up most of her career ambitions after she divorced Fitzmaurice and, at forty-one, married Rathbone in 1926. An article in the New York Post in 1964, titled “At Home with Mrs. Basil Rathbone,” reports that she stayed “at home” so that she could guide his career as well as raise their family.

The Man from Home (1922) via EYE Filmmuseum (Dutch intertitles)

While credits were collected using AFI, FIAF, Spehr and Braff’s Short Films Working Papers and Universal Silents, some inconsistencies remain. Braff lists Ouida Bergère as an actress in Getting Even and Mates and Mismates (both 1912), though Spehr does not. AFI lists Bergère as scenario writer and casting director on At Bay (1915), however, Spehr does not list her as working on the film. AFI only gives Frances Marion an adaptation credit for Cytherea, however, other sources, such as Sharon Smith’s Women Who Make Movies, gives scenario credit to Bergère. The author of this article claims Bergère helped with writing The Loves of Sunya, however, no source (including Gloria Swanson’s autobiography) can confirm this claim.

November 2019: Recent information concerning Ouida Bergère's birth location and name has come to our attention, revealing that she was born in the United States and not Spain (a likely self-promotional origin story). Census records and passport applications indicate that she was born Eula Branch, on December 14, 1885, in Little Rock, Arkansas. Furthermore, the adoption of the name Ouida Bergère may have come from the fact that her married name in 1911 was Burgess, which could easily be exoticized to Bergère. According to these documents, her mother's name was Ida, which could have also contributed to the creation of Ouida. For more information, see: https://www.flickr.com/photos/puzzlemaster/11624464274/.