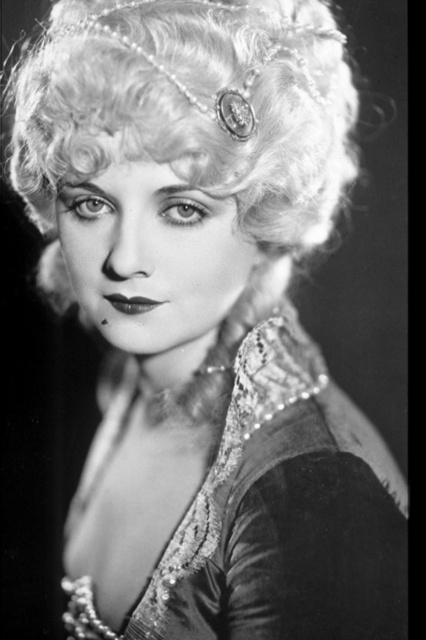 Alice Terry is probably best known to silent cinema historians in relation to the men with whom she frequently worked—Rudolph Valentino, in The Four Horsemen of the Apocalypse (1921) and The Conquering Power (1921); Ramon Novarro, in Scaramouche (1923) and The Arab (1924); and her husband, Rex Ingram, who directed Terry in all of these films as well as eight others. “Rex and His Queen” were one of the more celebrated director-actress teams of the 1920s, but there are indications that performing was only one dimension of Terry’s contribution to their work together. The most concrete acknowledgment of this behind-the-camera labor is found in their last film, Baroud (1932), in which she did not appear but for which she received on-screen co-directorial credit.

Alice Terry. Courtesy of the Library of Congress.

Trade and publicity materials suggest that around 1915 Alice began working as an extra to help her family financially. The general tenor of the publicity narratives after her sudden success in Four Horsemen was that she had been a “shy little extra,” nice but not terribly ambitious, attractive but not especially talented, and interested primarily in steady work to support her family rather than in becoming an actress. She had even been interested in other motion picture jobs, considering work as a script girl or a cutter behind the camera as preferable to performing in front of it. Terry’s status began to change after meeting Ingram, who promoted her to small parts in his early Metro Pictures films in the late teens. He also directed her physical transformation, encouraging her to wear a blond wig over her own auburn hair, overseeing a program of weight loss and dental repair, and creating “Alice Terry”—both the name and the image—as his protégé.

The trade and fan press promoted Rex Ingram’s authority over all his productions and considered Alice to be part of them, referring to her as “pliant clay” in the hands of her director, soon to become her husband. Terry herself disclaimed any agency for the new direction of her career, both in contemporary materials and upon subsequent recollection, as in the 1958 interview with George Pratt, and in fact it was this very lack of self-promotion that distinguished her persona. As Picture Play commented in a 1924 article, she was set apart by “her unrestrained enthusiasm for her husband, her unqualified praise for his work, with absolutely no mention of her own minor but definite achievements.” Further, “under his competent direction she will doubtless continue to acquit herself creditably… [As such] there is no valid reason for her to head her own company” (104).

In a sense, however, Terry already did head things up. A sensitive reading of publicity materials as well as anecdotal evidence suggests more agency on Terry’s part, as the de facto manager of the productions of the acclaimed director Rex Ingram. As she wryly commented to Photoplay in 1924, “[it] takes all my talent to play the successful actress and successful wife” (104). After World War I, Ingram experienced a succession of emotional vicissitudes, apparently the result of a physical injury he received while briefly serving in the Royal Canadian Flying Corps in late 1918. According to Anthony Slide, who interviewed Terry in later years, the actress was well equipped to handle such episodes and understood, perhaps better than Ingram himself, the commercial imperatives of studio filmmaking. After years in the business, Slide notes, the former extra had learned “many aspects of the creative process,” which proved invaluable when she had to complete Ingram’s work. As Slide describes the situation: “Ingram became incapacitated and too moody to work… [then] she would take over direction of his features” (2002, 380). Thus, although Terry is only given on-screen credit for Baroud—a sound film made after Ingram’s heyday and outside the US studio system—it is possible she also codirected some parts of Ingram’s motion pictures between 1921 and 1929.

Only in a 1932 article in New Movie entitled “Presenting Rex Ingram in ‘Baroud,’ Directed by Alice Terry,” does the dynamic of the relationship become public. Journalist Herbert Howe explores the turnabout for comic purposes, depicting Terry as authoritarian while Ingram wails about her “cracking the whip.” The article even includes a production still of Terry directing Ingram, who looks annoyed. Yet, when Rex is called to London for a few days, he promptly “turn[s] the production over to her” without a second thought (107). To a degree, then, Howe corroborates Slide’s description of Alice Terry’s behind-the-camera work on Ingram’s silent era films. The Howe article also offers a rather frank discussion of the couple’s growing differences as reflected in their domestic arrangements, revealing that they kept separate villas while on location. Such discourse seems to imply that changes in their public, artistic relationship had created a schism in the personal, domestic sphere, as if Terry’s appropriation of a directorial role could not be commensurate with that of “a successful actress and a successful wife.” Yet it may well have been Terry’s public performance of the latter that helped secure Ingram’s status as the “master of the silent cinema”—perhaps another dimension of women’s agency in the industry during this period that historically has been obscured. Although it is now clear that there were many husband and wife collaborations in the silent motion picture industry, the Alice Terry-Rex Ingram relationship was quite unique.

The Conquering Power. DVD. (Grapevine US)

Rudolph Valentino: The Great Lover. DVD. (Delta Entertainment US 2006) - contains The Four Horsemen of the Apocalypse (1921)

Scaramouche (1923) is streaming on Amazon Video

The Prisoner of Zenda (1922) is streaming on Amazon Prime

Alice Terry was credited under her birthname, Alice Taaffe, on all films before 1919. While numerous sources mention Alice Terry working as an extra for Thomas Ince on Civilization, 1916, she does not appear in the actual credits, nor in the AFI database, FIAF’s Treasures of the American Film Archives or Paul Spehr’s American Film Personnel and Company Credits, 1908-1920. Denise Lowe’s An Encyclopedic Dictionary of Women in Early American Films, claims Terry worked as an extra in Alimony, 1917 and The Devil’s Passkey, 1920, but this too cannot be confirmed through AFI, FIAF or Spehr. Mare Nostrum was cut to 10 reels; 9,894 ft. for release. Baroud was released in the U.S. in 1933 as Love in Morocco. It is difficult to establish a complete filmography for Alice Terry since there seems to be another actress named Alice Terry (also known as Alice Rodier) who also worked in the silent film industry. The latter was a Vitagraph actress, while Alice Terry (Alice Taafee) says that she never worked at Vitagraph, according to an interview with DeWitt Bodeen. Further research is being done in order to verify a more complete/concrete filmography for the Alice Terry featured in WFPP.