Born in Troy, New York, Harriette Underhill came to New York City, fleeing a brief marriage, at age sixteen, and became interested in the theater. After touring with several companies (including as part of the chorus in the original “Floradora” company), she returned to New York in 1908 after the death of her father, Lorenzo Underhill, a “horse breeder and turf man” (“Harriette Underhill Dies”), and took over his sports column at the New York Tribune. “A rare beauty” with “flaming orange” hair often framed by “a large black picture hat,” in the words of Ishbel Ross, “she was cynical to the core, scorned sentiment, had a sophisticated wit, [and] was generous and courageous” (412-413). In 1916, for a weekly column in the Tribune, Underhill began interviewing stage actors who had turned to performing in the movies at the New York studios. A fluid, articulate writer, she let her interviewees speak as they wished, rarely calling attention to herself. Her profile of Olga Petrova, for example, concentrated on the star’s face, her “alabaster skin,” “red hair,” “sad, almost tragic eyes,” and “the wonderful piquancy” of her voice (“Petrova of the Pictures”). In late 1919, Underhill was hit by a car and severely crippled, but she continued to write, taking over the Tribune’s film review column from Virginia Tracy.

Underhill was a perceptive, intelligent film critic and a compelling stylist, whose “cleverness with her typewriter was never to be doubted” (Perrill). In her review of Madame Peacock (1920), starring Alla Nazimova, she was so taken with the dialogue, adapted from the play, that she reproduced some of the telling exchanges that the theater star in the film has with an author, producer, and adoring audience member (“On the Screen” [26 October 1920]). Unlike fellow critic Mae Tinée, she found Frances Marion’s The Love Light (1921) “a fascinating story beautifully produced and marvelously well acted,” with a “gorgeous performance” by Mary Pickford in an exceptionally sustained war story (“On the Screen” [10 January 1921]). She also made an observant remark on Lois Weber’s directorial style in The Blot and What Do Men Want? (both 1921): “She never has any ‘big moments’ in her pictures, and her people act as they do in real life” (“On the Screen” [15 November 1921]).

Unusually attentive as well to the experience of watching a film in a theater, Underhill included a description of Samuel “Roxy” Rothafel’s epilogue of three candles being snuffed out on stage at the end of Ernst Lubitsch’s Passion (1921)—to symbolize the death of Pola Negri’s Madame Du Barry—in her review (“On the Screen” [13 December 1920]). Similarly, she praised his “elaborate program surrounding” The Cabinet of Dr. Caligari (1921) that amplified yet also softened an audience’s response to the puzzling German feature (“On the Screen” [4 April 1921]). But she wished that, rather than flash those unconvincing zigzag letters on the screen, a member of the theater’s chorus would simply shout “Caligari” several times at the end. A second viewing of Erich von Stroheim’s Foolish Wives (1921/1922), which she loved, revealed telling differences between the fourteen-reel print at the premiere and the ten-reel version on its re-release. She missed the full length of the “dual [sic] scenes” but not the part coming after the death of the villainous count; overall, however, she could not help feeling as when she was given “a school edition of Shakespeare,” in which “scenes which some people considered objectionable have been cut” (“On the Screen” [27 January 1922]). 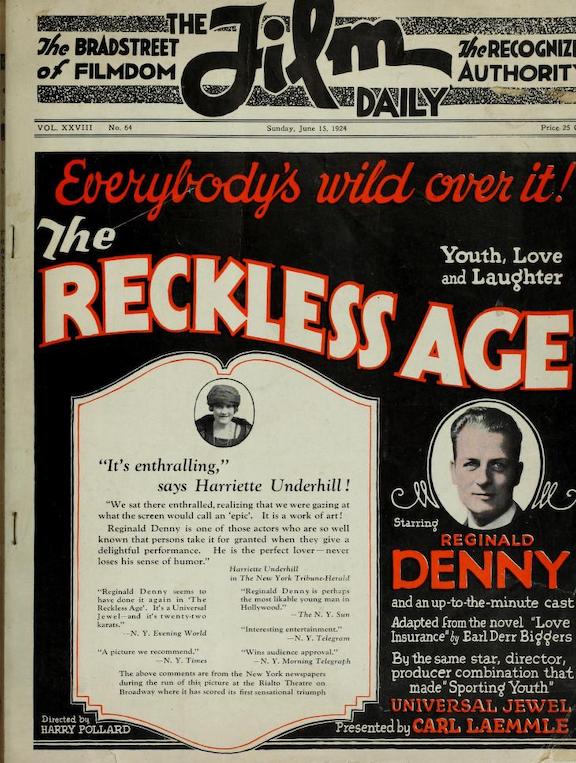 June 1924 ad in Film Daily for The Reckless Age (1924) that reproduces part of Harriette Underhill’s review (and a small photo of her).

In 1923, Underhill contracted tuberculosis, but she kept writing for the Tribune. Although invited to Hollywood and feted with parties, she hated the place and returned to New York (Ross 413). According to advertisements in Film Daily, she was still reviewing films and writing up chatty interviews with stars such as Negri and Rudolph Valentino for the New York Herald and Herald-Tribune until shortly before her death from tuberculosis (“Harriette Underhill Dies”). In fact, on the day she died in May 1928, she sent her last column, written by dictation, to the Herald-Tribune (Ross 412).

Ross, Ishbel. Ladies of the Press: The Story of Women in Journalism by an Insider. New York: Harper & Brothers, 1936.