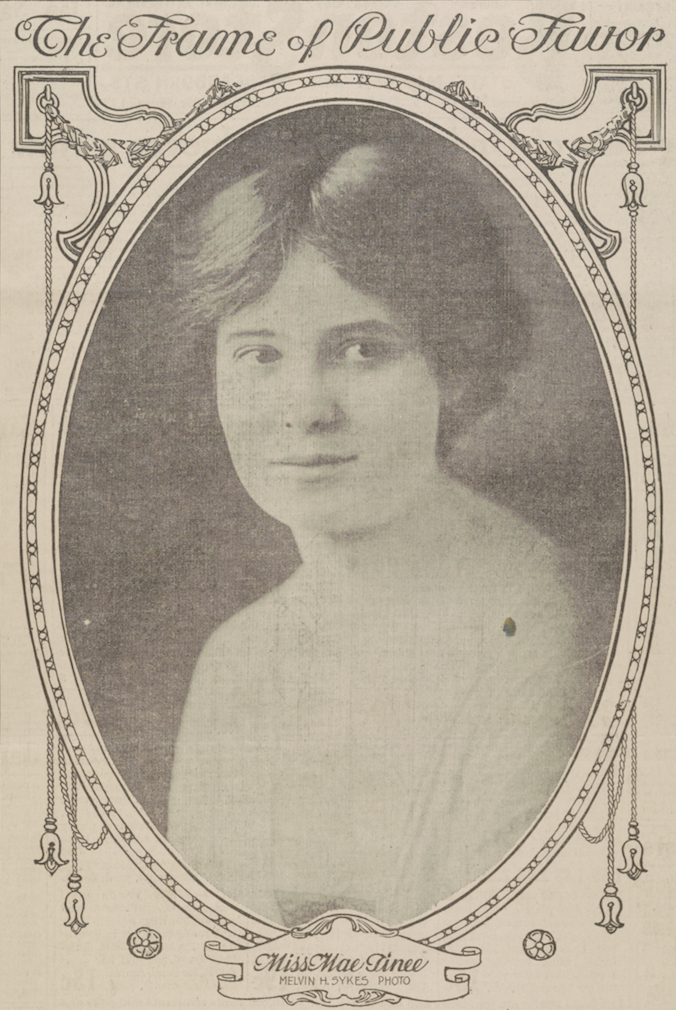 Born and raised in Colorado, Frances Peck worked briefly as a reporter for the Denver Republican and then the Denver Times. After a divorce, she moved to Chicago and, in 1911, joined the staff of the Chicago Tribune, writing features and other articles (Ross 411-12). In early March 1914, adopting the nom de plume of Mae Tinee, she introduced a Sunday page devoted to motion pictures, “Right Off the Reel.” Syndicated and much imitated by other newspapers, this page had a centered feature, “In the Frame of Public Favor,” with an exceptionally large publicity halftone (sometimes in a gilded frame) and a short profile of a current movie star supposedly chosen each week by readers. In early January 1915, in a publicity stunt, the Sunday Tribune editor put Mae Tinee in “The Frame of Public Favor” as that week’s most “popular player” (“Miss Mae Tinee”). Initially an editor and gossip columnist (and a recognized asset to the paper), she took over Kitty Kelly’s film review column in October 1916, retitling it “Right Off the Reel.” 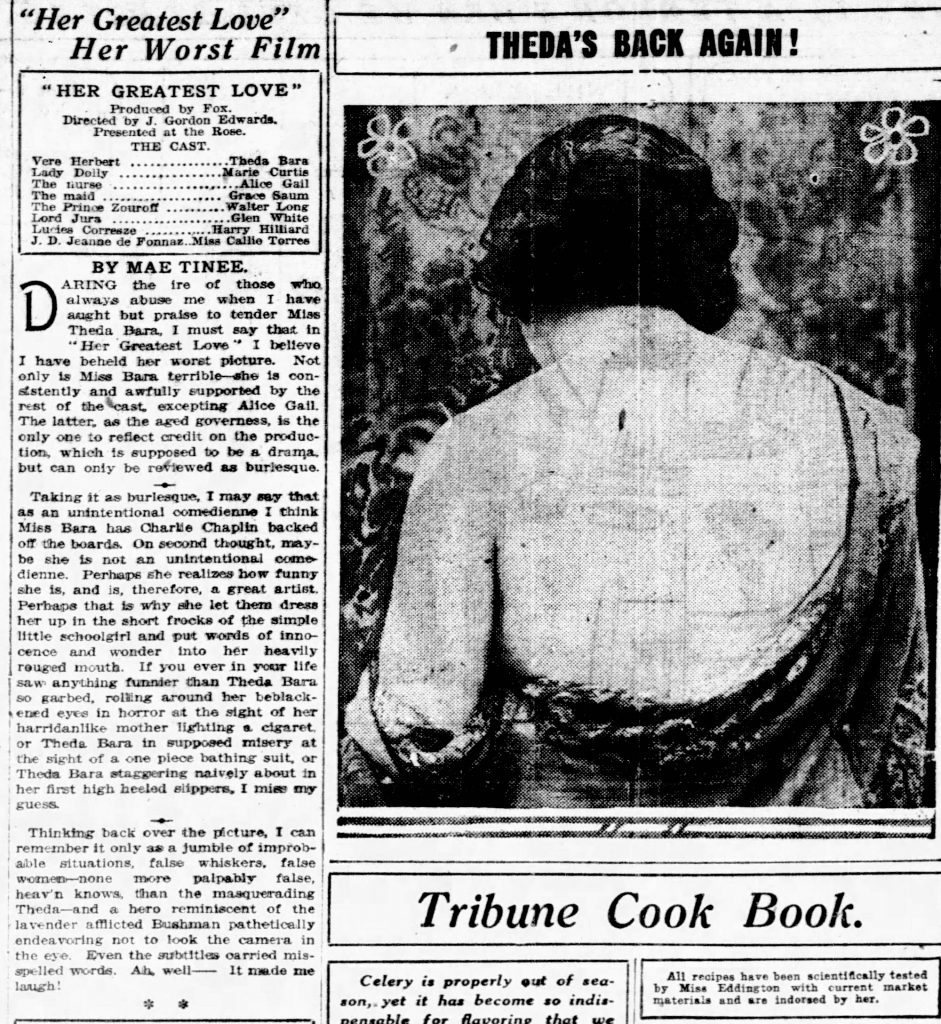 From early on, Mae Tinee cultivated a snappy, idiomatic writing style that could be controversial. She scorned stars such as Theda Bara and Francis X. Bushman (“Right Off the Reel” [8 November 1916]), satirically retold the story of William S. Hart’s The Devil’s Double (1916) as if concocted by a “bunch of youngsters” playing in a barn (“Right Off the Reel” [25 November 1916]), and tartly described Lois Weber’s Idle Wives (1916) as “pictorial goulash” (“Idle Wives”). But she also praised Alla Nazimova’s screen debut in the “tragic, tender probing of motherhood” that was War Brides (1916) (“Nazimova Makes Her Screen Debut”). It was likely her praise of Mothers of France (1917), which starred the aged and ailing Sarah Bernhardt as a mother who loses her husband and only son in the Great War (“The Divine Sarah”) that led Peck to place a French accent on her name, becoming Mae Tinée. By then, some industry figures took exception to her frequently sarcastic reviews, and even the Chicago Motion Picture Owners’ Association protested her “frivolous treatment” of the movies (“Latest News of Chicago”). Her review of The Romance of Tarzan (1918), for instance, opened with her breathing a sigh of relief that there would be no more sequels (“Being Final”).

After the war, Mae Tinée was impressed by the imported German films, especially those directed by Ernst Lubitsch and starring Pola Negri. An exception was The Cabinet of Dr. Caligari (1920), whose diabolical tale and “queer, futuristic-cubic” set gave her “the willies” (“Whoops, My Dear!”). While praising masterful American films such as The Miracle Man (1919), The Four Horsemen of the Apocalypse (1921), The Affairs of Anatol (1921), and even Weber’s The Blot (1921), Mae Tinée could not resist writing a frank pseudo-letter that took Mary Pickford to task for accepting the leading role in Frances Marion’s “mess” of a story, The Love Light (1921) (“O, Mary, Mary”).

In early 1922, she introduced a weekly column titled “Kick Korner,” asking readers to write to her with complaints, or “kicks,” about producers, exhibitors, or specific films in order to improve the movies (“Kick Korner”). Those “kicks” came in droves and occasionally called the critic herself to task. Two letters were especially vehement: “you seem to have a pretty good opinion of yourself and your column and I think that is all rot” (“Movie Fans’ Kick Korner”) and “when I saw your picture in the W.G.N. some months ago, I never could have believed that so cruel a nature could hide behind such a kindly face” (“Movie Fans’ Letter Box”). By late 1923, Mae Tinée seemed to be toning down her language. Beginning with an unexpected rave of The Merry Go Round (1923), she now opened her columns with a “Good Morning!”—sounding like a friend or neighbor sitting at a reader’s breakfast table—and left with a cheery “See you tomorrow.”

As a sign of her continuing influence, in early 1924, one column closed with the following: “Reprints of any review by Mae Tinée printed in the last thirty days may be obtained by mailing a stamped, addressed, return envelope to (or by calling at) The Tribune’s Public Service Bureau, 11 South Dearborn Street” (“Fiddlers Get Their Pay”). Long before Mae Tinée retired from the Tribune in early January 1945, another woman had taken over as the newspaper’s film critic and under the same name (“Obituaries”). Little is known of Peck’s personal life, but she did have a second and third husband as well as a daughter with a nursing career (Ross 412). When Peck died in an Evanston hospital in May 1961, the New York Daily News named her “one of the nation’s early full-time motion picture critics” (“Obituary”).

Ross, Ishbel. Ladies of the Press: The Story of Women in Journalism by an Insider. New York: Harper & Brothers, 1936.