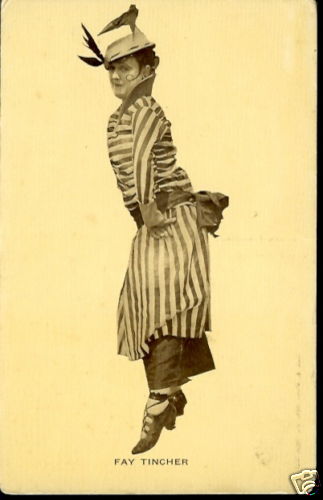 One of comedienne Fay Tincher’s few extant titles, Rowdy Ann (1919), has been described recently by Andrew Grossman, as “one of the first American films, comic or otherwise, to legitimately address the social psychology of gender construction.” But Tincher is barely mentioned, if at all, in histories of the silent era. Kalton C. Lahue and Samuel Gill are among the few to acknowledge her significance, writing that her work with Al Christie between 1919–1920 “ranked among the best on the screen at the time” (372). They suggest, as have others, that she had “some of the elusive qualities of Mabel Normand,” and conclude that her disappearance from the screen in 1928 remains a mystery (368). More recently, where she does receive a few lines, scholars selectively represent her career, as when Karen Mahar remarks that Tincher, whom she too sees as the closest to Normand in beauty and ability, reached fame between 1923 and 1928 playing the wife in the Andy Gump series (Mahar 2006, 130). Tincher did play Min Gump, although not in her wackiest phase during her peak, but rather at a time when her stardom was on a decline. Yes, the “Gump” series was very popular, but Tincher’s heyday was between 1914 and 1920 when, for one and a half years, between 1917 and 1919, she was reported as having had her own company, Fay Tincher Productions. Here, she invites comparison with other popular comediennes who gave their names to short-lived companies—Normand, Marie Dressler, Flora Finch, Gale Henry. 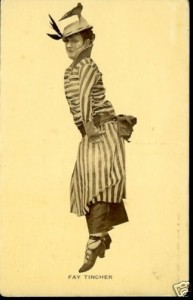 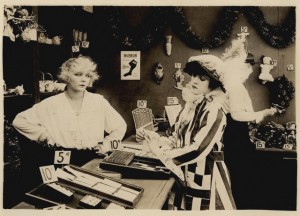 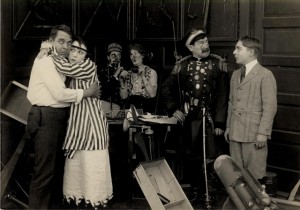 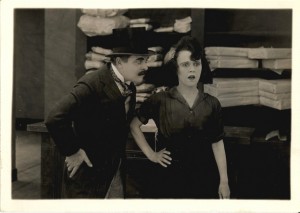 Fay Tincher and Edward Dillon,Laundry Liz (1916) or perhaps Back to the Laundry (1916). Private Collection. 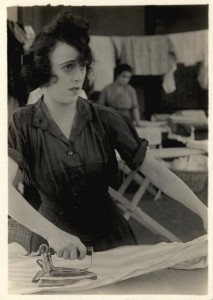 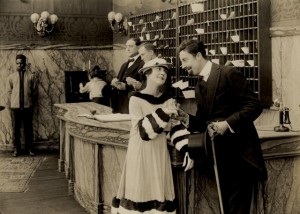 World Film Corporation, the distributor for Fay Tincher Productions, publicized the new venture with this release: “Miss Tincher writes her own stories (in self defense, as she puts it), chooses her own casts, and directs her own pictures” (qtd. in Massa 22). A photo caption under a scene from one of her films, Some Job (1918), reiterates this image: “Fay Tincher is a merciless autocrat when she directs men’s activities.” But today, since most of her films from this period are lost, we know little of those years when Tincher was at her most powerful as a film producer as well as a comedy star. In front of the camera Fay Tincher had three distinct personae: 1) Ethel, the stenographer, the role that made her a star; 2) a cowgirl; and 3) the housewife, Min Gump. Before taking on the role of Min, her characters were consistently strong, independent women, anticipating something of the uniqueness, confidence, and even dominance of men, with the chutzpah later embodied by Mae West. Like West, Tincher was short, only five feet two, but both commanded the screen despite their size. Unlike West, however, Tincher never pretended to be a sex symbol; she rarely put herself in a romantic situation and rejected conventional beauty. The Milwaukee Journal in 1914 observed that Tincher “persists and revels in making herself look awkward, no makeup… nor does she care how it makes her look provided it accomplishes her purpose—to make people laugh and be happy” (n.p.). She attracted attention through her bizarre way of dressing on- as well as off-screen. Since she did not have the lead as Ethel in the Bill the Office Boy films, she got herself noticed with the distinctive black and white striped costumes that became her trademark. As Ethel, Tincher also chewed gum incessantly and styled her hair with a huge spit curl in the middle of her forehead or over one cheek. A 1917 cover story in Motion Picture Magazine noted: “the stenographer wasn’t meant to be the star of the cast, but the distinctive way in which she carried her role made her one overnight” (Wade 65).

As a sometimes cross-dresser, Tincher reveled in roles that asked her to perform athletically and to face down danger. On June 20, 1915, the Fargo Daily published a photograph of the comic dressed as a boy, with a hat and cane, its caption quoting Tincher: “It’s more fun being a boy in a movie comedy than chewing a whole package of gum” (n.p.). For the newly formed Triangle-Fine Arts Company production of Don Quixote (1916), Julian Johnson in the March issue of Photoplay praised Tincher, calling her performance “little short of wonderful,” with the reservation that she made Dulcinea “into a female Charley [sic] Chaplin” when she should have resembled Lady Godiva” (110). In the same periodical in June, John Lloyd commented that her bizarre and eccentric performance “established Fay Tincher as one of the great film actresses” (56). She then went on to star in a series of shorts for the Triangle Company, many of which were written by Anita Loos.

Born in 1884 in Topeka, Kansas to an affluent family, Fay Tincher began appearing in amateur theatre at an early age. From the beginning, she was remarkably savvy about publicity and gained a good deal of notoriety in 1908 when she seemed to be unsure about whether or not she had, on a dare, married a wealthy Connecticut bachelor named Ned Buckley. Stories about this escapade ran in a number of papers, including The World, where in 1908 Tincher is quoted as saying, “Not that Ned would not make a desirable husband for any girl who wished to marry… But I do not want to marry him nor any man” (n.p.). As far as we know, however, this marriage was a publicity hoax. Tincher never did marry.

Fay Tincher seems to have struck out on her own when she formed Fay Tincher Productions in 1917, but exactly how many comedies she made is uncertain, and none of these are extant. We still do not know what happened to her company and why she signed with Al Christie productions in 1918. Christie was fond of using cross-dressing as a comic device, and he utilized the unconventional Tincher as a wild, Western cowgirl, not only in Rowdy Ann (1919), but also Go West Young Woman (1919), Wild and Western (1919), and Dangerous Nan McGrew (1919). But in 1920 she stopped making Western comedies, and appeared in only a few more films for Christie. There is a two-year gap before she is seen on-screen again as Min Gump, a conventional woman’s role that tamed her unruly uniqueness. When the series ended in 1928, she seems to have disappeared.

Why? One reason may have had to do with her rumored sexual preference for women, as Loos intimates (Loos 1977, 31). In addition, Tincher may have been on Will Hayes’s rumored blacklist created in the wake of the Fatty Arbuckle and William Desmond Taylor scandals in 1921 and 1922. Another reason may simply be that comedy changed in the 1920s. Female slapstick clowns of the teens, such as Alice Howell, Louise Fazenda, and Polly Moran took on supporting roles as comedy blended with drama in an effort to appeal to more sophisticated audiences. Tincher died in 1983 in Brooklyn, New York and is buried in an unmarked grave in Silver Mount Cemetery on Staten Island according to Billy Doyle’s Necrology (1995, 80). What happened to her during the fifty-five years that elapsed between her last motion picture in 1928 and her death deserves to be unearthed along with her lost films. In 1916 she is quoted as having said that “Comedy on screen will have to be taken seriously and raised to a much higher level than it has been so far, if it is to be permanent” (Denny 78).

“Where There's A Will There's A Way And She Has Both To Make You Laugh.” Milwaukee Journal (31 Oct. 1914): n.p. clippings file. New York Public Library, Billy Rose Theatre Division.

As very little has been written about Tincher, it is likely that this filmography is incomplete. Although it can’t be confirmed, Tincher probably appeared in more of the dramatic Reliance-Majestic one-reelers before she became popular in the Komic Comedies in 1914. It is also likely that Tincher wrote and/or directed some of the titles produced by her production company. Finally, Library of Congress has an untitled 35mm acetate dupe negative listed as “Unidentified United Pictures Film, 1920,” with a cast consisting of Fay Tincher, Edward Dillon, and Frank Bennett. It is probably a Triangle or Komic short. Casey’s Vendetta and The Battle of the Sexes both exist as fragments. Both prints of The Housebreakers at Library and Archives Canada and the Library of Congress are incomplete.