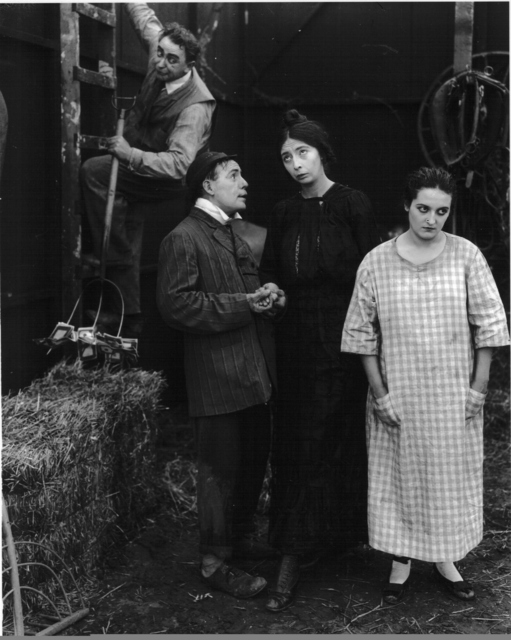 Thought to be the prototype for Popeye’s girlfriend Olive Oyl, Gale Henry was tall and extremely skinny, with large eyes and a sharp nose. Known as “The Elongated Comedienne,” from 1914 to 1933 she entertained audiences with eccentric physical comedy. Like her contemporaries Alice Howell, Mabel Normand, Marie Dressler, and Louise Fazenda, Gale took many bumps and bruises in the name of laughter alongside her male comedian counterparts in an estimated two hundred fifty-eight shorts and features, some of the craziest of which she wrote. Her active female characters bear comparison with Pearl White and Helen Holmes, the “serial queens” of the 1910s, and she often spoofed the cliff-hanger genre in which they appeared. Henry’s performing style could be very broad, but she also had a gift for small, insightful gestures that could bring a moment of pathos and feeling into the knockabout. She often played put-upon slavies, but her unconventional looks also made her perfect as a lovelorn spinster, an overbearing wife, or a burlesque country girl. She wore a wide-brimmed hat, a tight, old-fashioned button-up blouse, a long plaid or checkered skirt, and clunky high-top shoes. The overall look had a feel of L. Frank Baum’s Scarecrow of Oz—as if she were put together from odd, mismatching parts. Lantern slide, The Elongated Comedienne. Courtesy of the Museum of the Moving Image. 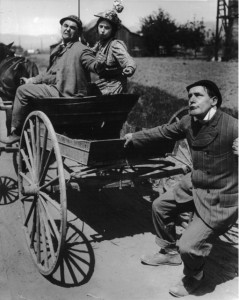 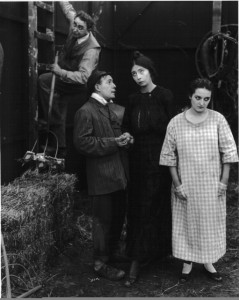 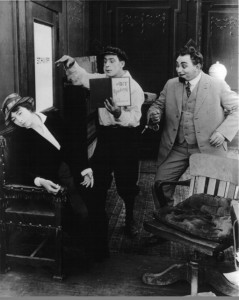 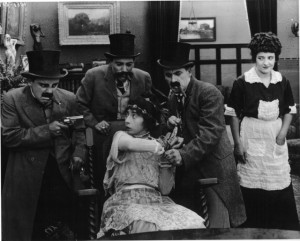 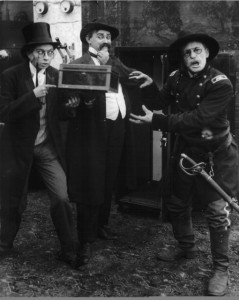 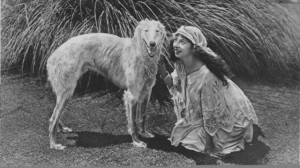 After growing up on a ranch in Bear Valley, California, Gale Henry began her stage career with the Temple Opera Company. In a 1920 Photoplay article, “The Bear Facts About Gale Henry,” she said that her film career began in 1914: “I knew a girl who worked at Universal; she took me out there with her one morning, and I got a job. That’s all there is to it, except I remained there five years and was featured in two hundred comedies” (26-27). She was regularly employed in Universal’s Joker Comedies, a series set up in 1913 to compete with Mack Sennett’s Keystone comedies. One motion picture from the series that survives, A Millionaire for a Minute (1915), stars Max Asher as a bumpkin in love with schoolmarm Gale. Her old, Egyptologist uncle is against their marriage, but when Max gets an inheritance, they decide to elope. At the same time a pair of crooks breeze into town to fleece Max. When it turns out that his inheritance is Cleopatra’s ring, everyone leaves him in disgust except faithful Gale. The uncle finds out about the ring and is more than willing to trade Gale for it to provide a happy ending. Presented in an economical style, the slapstick grows logically out of the situations, and the acting is relatively subdued for a knockabout comedy.

During her tenure at Universal Pictures, Gale Henry turned up in the studios’ other brands, such as Nestor and L-Ko, after their star comedienne Alice Howell moved to Century Comedies. In 1915 Pat Powers produced the Lady Baffles and Detective Duck series, a spoof of cliff-hanger serials in eleven one-reel chapters, of which at least two are extant. Max Asher played inventor and master of disguise Detective Duck, who was hot on the heels of his nemesis, the mysterious crook, Lady Baffles (Gale). For this witty and surreal series Gale wrote many of the original stories, with chapter titles like “The Dread Society of the Sacred Sausage.” While she is only officially credited as author on a handful of other shorts, it is very likely that she continued contributing story ideas and developing her screen character, especially when she set up her own independent production company, the Model Comedy Company.

Gale Henry left Universal in 1918 and with her husband, Bruno J. Becker, started the Model Comedy Company. Their shorts were distributed by the Bulls Eye Corporation and were designed to exploit and showcase Henry’s talents. The extant two-reel The Detectress (1919) presents her as an aspiring detective who investigates a Chinese gang lord’s plot to steal the plans for an invention that will enable diners to see what is in the chop suey they’re eating. A nonstop chase through the Chinatown maze of trapdoors and secret panels provides the climax, but in the end the story turns out to be Gale’s opium-induced dream. Another extant Model Film Company title, Her First Flame (1919), is set in the future of 1950 where women have taken over and men wear dresses. Gale is running for the office of fire chief, and after she wins, the loser kidnaps Gale’s frilly boyfriend. When he spurns her advances, the rival ties him up in a burning house, but Gale saves the day in a last-minute rescue. It would be productive to investigate whether, under the guise of comedy, Henry had, in fact, greater freedom of movement than the popular lady detectives and cliff-hanger heroines whose films she spoofed and played on.

In 1920, when Bulls Eye merged and became part of the Reelcraft Pictures Corporation, Gale discontinued her series and was off the screen for a time. Through the 1920s she appeared in eighteen features, the most memorable being Open All Night (1924), where she was teamed with Raymond Griffith, and Stranded (1927), in which she gives an excellent performance as a cynical, well-seasoned Hollywood bit player who takes young Shirley Mason under her wing and teaches her the ropes of working at the studios.

When sound took over Hollywood, Gale made a swift transition, appearing in two features, The Love Doctor (1929) and Darkened Rooms (1929), plus Charley Chase’s first talkie The Big Squawk (1929). Her precise, spinster-like voice was fine and suited to her established persona.  However, after an occasional short, again with Chase, she retired in 1933, at the age of forty, relatively old for a female silent film comic writer-performer.