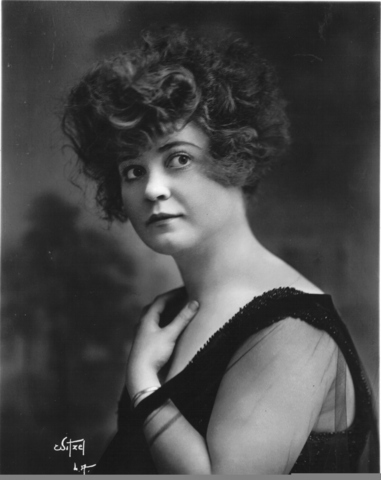 One of only a handful of silent comediennes who ventured into the “men’s terrain” of rough-house physical comedy, at her peak Alice Howell’s name was as well-known to moviegoers as any of the popular male comics of the day, and like them, her films were designed to showcase her talents and the characterization that she had made famous. In her day, her popularity could be compared with that of Marie Dressler and Mabel Normand, but she is unfortunately not as well remembered. At Mack Sennett’s Keystone Film Company, Howell quickly worked her way up from crowd scenes to featured parts in shorts such as Charlie Chaplin’s Laughing Gas (1914), and starred in at least one, Shot in the Excitement (1914). In this early one-reeler Alice helps her father whitewash a fence when sweetheart Al St. John comes calling. Complications ensue with a jealous rival, and the film ends with Alice, Al, the rival, Dad, and a couple of Keystone Cops all being chased by flying cannonballs. In her earliest known comedy in which she has the starring role, Howell’s comic timing is already in place as is her capacity for taking punishment: in the course of the film she slips down stairs, gets soaked with water, is chased by cannonballs, and has a rock bounced off her head.

Hired away by Sennett’s former second-in-command, Henry “Pathe” Lehrman, when he set up the L-Ko Komedy Company, Alice was cast to support Billie Ritchie and became popular in her own one-reelers. By 1917, she was such an audience favorite that Julius and Abe Stern formed Century Comedies to showcase her talents, making her, along with Normand and Dressler, the third comedienne to have her own exclusive production unit. Producer Julius Stern justified this decision to the Moving Picture World in 1917: “Women have demonstrated on the stage that they can be just as funny as the comedians of musical comedy, burlesque, vaudeville, or farce. We propose to establish Miss Howell as a comedy star upon the screen and we have faith in our determination. Miss Howell has ‘made good’ as L-Ko’s leading comedienne and we are convinced that she will duplicate her past success as a star of her own series” (1135). In a rare surviving Century Comedy title, Hey Doctor! (1918), Alice is a receptionist in a doctor’s office that is very short on patients. To remedy the situation she walks down a street dropping banana peels on the sidewalk. As pedestrians begin slipping and falling, Alice hands out cards for the doctor. After Howell and Century parted ways in 1919, the company continued turning out comedy shorts and was renamed Stern Brothers Comedies in 1926.

The character Howell developed was a slightly addled working class girl, and she specialized in waitresses and maids. A round Kewpie-doll face, with large eyes and bee-stung lips was topped off with a mountain of frizzy hair piled high on her head producing the effect of smoke billowing from an active volcano. To complement this look of someone who had kissed an electric light socket, she wore old-fashioned plaid or checkered blouses, long print skirts, and big clodhopper shoes. The mountain of hair and a stiff-backed penguin-waddle walk became her signature trademarks.

As we learn from the Moving Picture World in 1919, Howell moved to the independent Emerald Company, which became part of the Reelcraft Corporation and released her best surviving film, Distilled Love (1920) (123). Howell plays a farm girl who is framed as the mother of a baby by an evil Oliver Hardy. Forced to leave the farm, she goes to the big city with the baby and dances in the streets for money. The climax takes place at a big society party, which Alice totally destroys in an avalanche of stunts, including riding from room to room on the train of the hostess’s gown. One highlight is the gag made famous by Mary Pickford. She reaches for a piece of pie, but sees a placard of “Thou Shalt Not Steal” on the wall, which stops her until she sees a second sign, “The Lord Helps Those That Help Themselves.” Another occurs as she arrives in the city with the hungry baby. Howell spots a milk truck, and in a great traveling shot, she runs behind the truck, opens the back door, and produces a hose—one end of which she sticks in a milk can and the other in the baby’s mouth. One of Howell’s gifts was the ability to combine comedy with pathos, as when she is driven off the farm during a raging storm only to be stopped by a bolt of lightning that just happens to strike her in the rear.

Howell’s last starring series was a group of 1924–25 domestic comedies for Universal Pictures featuring a married couple and their goofy butler. While still addled and exhibiting her trademark hair and walk, her character graduates here to a comfortable, middle-class status as she trades in her mismatched costume for more flattering attire. When this series ended, she appeared in one last short, Madame Dynamite (1926), for Fox Film Corporation. Howell always maintained that her comedy was based on her own life experiences. In 1917, she told the New Jersey Tribune: “The days are not so far in retrospection when I was glad to do any kind of work and I have not forgotten how it feels to stand in line waiting for a chance to do extra work. I wanted the money so badly that I offered to wear any eccentric sort of make-up or take any chances so long as there was a pay check at the end of the week. I often felt then like the down-trodden, put upon, much abused ‘slavies’ that I struggle to portray humorously today. Most of my scenes are broad farce, but when I get the opportunity I try to register faithfully the character of such a girl” (15).

FIAF does not credit Alice Howell in several extant films in which she appears. Braff’s confirms that she was in: Silk Hose and High Pressure and Under New Management. The publication Griffithania confirms her appearance and gives the archive information for: Hello Mabel (issue 71), Lover’s Luck (Issues 72-74), How Stars are Made (Issues 72-74), Neptune’s Naughty Daughter (Issues 72-74).