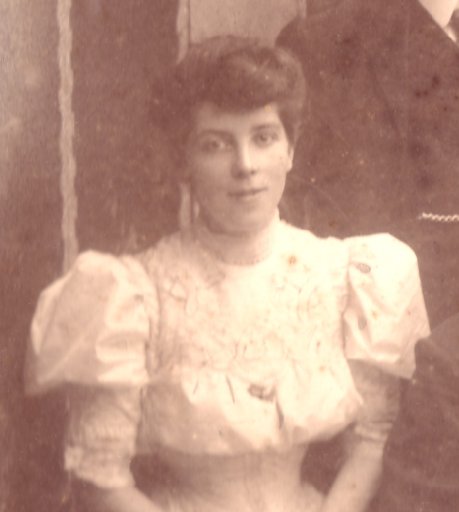 Ellen O’Mara Sullivan and her husband, James M. Sullivan, started what scholars have called the most prolific indigenous film company of the silent period, the Film Company of Ireland (FCOI). The company began trading in Ireland in 1916, producing primarily historical melodramas and romantic comedies and dramas, all focusing on Irish culture and/or the historical battle for political autonomy from Great Britain. The films had wide release in Dublin and the provinces, and a select few opened in Great Britain and the U.S. Though Sullivan and the FCOI have been the subject of some study, O’Mara Sullivan has received little scholarly attention. Private collections and archival material, however, point to her active participation as the FCOI’s co-director, running the company with her husband until her death in 1919. 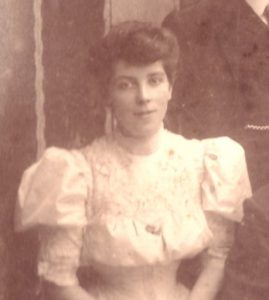 Shortly after O’Mara Sullivan’s 1910 marriage to the Irish-born American, discussions began on an indigenous Irish film company. In March 1916, her husband and banker Henry Fitzgibbon registered the company in Dublin, according to the “Memorandum and Articles of Association of the Film Company of Ireland, Limited,” held in the National Archives of Ireland. The agreement indicates that anyone holding shares could function as company director (n.p). Fitzgibbon appears to have served only as a financial advisor. Sources, such as the James O’Mara Papers at the National Library of Ireland, however, acknowledge both O’Mara Sullivan and her husband as working company directors. She came from a wealthy Limerick family that not only fronted the money to start the company, but also financed its productions. Liam Ó Laoghaire’s handwritten notes and his unpublished interview with her daughter, Sheila Sullivan Callaghan, confirm O’Mara Sullivan’s role as co-director. In the interview, her daughter notes that the FCOI was the family business and that both her parents were active in production and sales. Dr. Michael Rynne further identifies O’Mara Sullivan as one of the directors in a 1965 letter to historian Poinsias Ó Conluain. Rynne explains that he visited the company offices several times a week in 1917-1918 and that O’Mara Sullivan and her husband were the only directors taking an active role in company business. Rynne played a starving teenager in one of the company’s films, Knocknagow (1918), and his mother Mary (O’Mara Sullivan’s sister) also had a small role in the film. According to O’Mara Sullivan’s granddaughter, novelist Mary Rose Callaghan, family members frequently served as actors, crew, and company workers.

O’Mara Sullivan’s involvement in the shipping, distribution, and marketing of their films in the U.S. is documented in letters to her niece Hazel and husband Karl. The letters are housed in Mary Rose Callaghan’s Private Collection and are explored in studies by Dan Schultz and Maryanne Felter. In 1918 O’Mara Sullivan and her husband left their young children in the care of a nanny and went to New York to oversee the sales of what she continually refers to in the letters as “our films.” They also launched a branch of the company in the U.S. Her uncle Joseph, an opera singer, was on the board of directors and spent time in the U.S. organizing the company, according to documents in the James O’Mara Papers. In one of the first letters to Hazel on July 27, 1918, O’Mara Sullivan talks about having to “pawn her rings” to get the films out of customs. Other letters discuss sale negotiations, where the films are screening, and successful runs.

O’Mara Sullivan and her husband initially distributed their films in commercial and private picture houses, as well as in schools and churches, particularly in Irish-American neighborhoods on the east coast. Her letters do not always indicate which films the company marketed. However, the historical melodrama Knocknagow (adapted by Mrs. N. F. Patton) is discussed several times. Presumably the other films included some of the romantic comedies and dramas not destroyed in the fires that The Irish Limelight in January 1917 reports consumed the company offices in Dublin (3). An article on December 10, 1918 in The Boston Globe notes Knocknagow’s screening together with the shorter Widow Malone (1916) at Boston’s Tremont Temple that month (3). O’Mara Sullivan’s letters indicate that their films did well. When both she and her husband returned to Ireland in 1919, company officials remained. They added another historical melodrama, Willy Reilly and His Colleen Bawn (1920), and a propaganda film, the Dáil Bonds Film (1919), to their repertoire. The latter is a non-fiction short featuring notable Republicans in a bond drive to raise money for the newly-formed Republic. The film was screened in the U.S. and Ireland. Gary Rhodes, in his study of Irish-American press response to the U.S. screenings, notes that Knocknagow also opened in New York during this period in a double bill with The Miser’s Gift (1916) (2012, n.p). Felter and Schultz explain that the company quickly faced difficulties connected both to the competitiveness of the American market and the changing political scene in Ireland (2004, 35-40). They note a failure to meet theatre demands and the waning interest of an Irish-American audience. They blame the loss of interest on the political in-fighting over the 1921 Anglo/Irish Treaty that led to the 1922-23 Irish Civil War. FCOI director and actor John MacDonagh also noted the company’s inability to navigate the intricacies of the American film market (1976, 10). The U.S. office closed its doors in 1922. 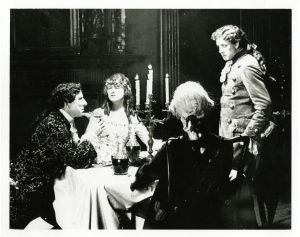 Willy Reilly and His Colleen Bawn (1920). Courtesy of the Irish Film Institute.

While ample evidence of her role as company co-director exists, some confusion has arisen over a possible writing credit on Knocknagow. Schultz and Felter note that O’Mara Sullivan’s appearance as the copyright holder on Knocknagow indicates she wrote the adaptation (2012, n.p; Felter 2013, n.p.). Patton is widely acknowledged in newspaper reviews like in The Clonmel Chronicle and credit reports  as having scripted the adaptation from the Charles Kickham novel of the same name (1918, 5), though scholars have not discovered any details about Patton’s personal life or her writing career beyond Knocknagow. O’Mara Sullivan could have been assigned the copyright as either the financial backer and/or as the company director. Kevin Rockett believes that the copyright is most likely the result of her family’s investment in the production (2015, n.p.).

What little scholarship does exist focuses on the nationalist underpinnings of the films. Scholars have argued that the company’s work was heavily influenced by the nationalist agenda of Ireland’s theatre companies. They even recruited actors and directors from the Irish Theatre Company and the Abbey Theatre (Rockett 1988, 16-32; Barton 23-31). In keeping with the cultural renaissance of the period, scenics showcased the countryside and historical places. Fiction films featured mostly a pastoral Ireland, presented idealized Irish characters, and explored nationalist themes like the colonial struggles under Great Britain. The historical melodramas, like Knocknagow and Willy Reilly and His Colleen Bawn deal directly with those struggles, focussing on Catholic/Protestant disputes and the evictions and poverty that resulted from tenant/landlord differences of the 18th and 19th centuries. Romantic comedies and dramas, like An Unfair Love Affair (1916), The Miser’s Gift, Rafferty’s Rise (1917), O’Neil of the Glen (source writer Mrs. M. [Margaret] T. Pender, 1916), and When Love Came to Gavin Burke (1917) assert their nationalism through Irish characterizations distinct from what Mary Trotter identifies as the 19th century stage image of the simple, sometimes clownish Irish peasants that appealed to British audiences (38-39). According to scholars, the FCOI films did present stock characters, but cast them in a positive light. As a result, these characters became important features of Irish national discourse. Men are presented as predictable heroes fighting for Irish rights, while women are drawn as figurative representations of the land (Meaney 238-39; Casella 60). Advertisements and reviews of the period also promoted the nationalist agenda by noting the films were made in Ireland by an all Irish cast and crew.

The attention to nationalist issues in these films is not surprising, given O’Mara Sullivan and her husband’s political leanings. Both supported an independent Ireland and subsequent formation of an Irish republic. According to accounts, Sullivan was briefly jailed following the Easter Rising, though at the time he claimed to be too busy with the FCOI to take part in the Rising (LaVelle 111-13). O’Mara Sullivan came from an active Republican family. Her father, Stephen, was mayor of Limerick. Brother James was Sinn Féin TD in the Dáil Éireann (Irish parliament), supervised finances under Éamon de Valera’s first presidency, and was an early Sinn Féin financial director. Research thus far does not address the extent of O’Mara Sullivan’s political activities. However when she died in 1919, a May 23 obituary in the Limerick Leader noted that she was afforded a full nationalist funeral (3).

The FCOI ceased production in 1920 after O’Mara Sullivan died of typhoid nursing her son who had contracted the disease. Noting her contribution to the FCOI, a writer going by the initials J.A.P. and working for the British trade, The Bioscope, predicted that her death would interrupt the company’s production. However, the writer expected the company to continue making films (1919, 98). The FCOI released only three more films: the Dáil Bonds Film, Willy Reilly and His Colleen Bawn, and Paying the Rent (1920). All were in preproduction or production while she was still alive. Sullivan distanced himself from these remaining productions, eventually moving to the U.S. where he worked as a lawyer and newspaper journalist. When the FCOI folded, some of the directors and actors formed Irish PhotoPlays, making three films: The Casey Millions (1922), Cruiskeen Lawn (1922, released 1924), and Wicklow Gold (1922). FCOI regular John MacDonagh directed all three films, which followed the FCOI’s nationalist model.

The full extent of O’Mara Sullivan’s influence on the company productions still needs to be documented, as well as her involvement in the distribution of the films in Ireland and Great Britain. In addition her input on the U.S. screenings needs further research. However, preliminary study suggests that the FCOI was a joint effort between her and her husband, and that they both shared a desire to use the arts to further a nationalist agenda.

Rhodes, Gary D. “The Film Company of Ireland and the Irish-American Press.” Screening the Past 33 (2012): n.p. http://www.screeningthepast.com/2012/02/the-film-company-of-ireland-and-the-irish-american-press/

Schultz, Dan, and Maryanne Felter. “The Making of an Irish Nationalist: James Mark Sullivan and the Film Company of Ireland in America.” Screening the Past 33 (2012): n.p. http://www.screeningthepast.com/2012/02/the-making-of-an-irish-nationalist/

Since some of the early FCOI films were destroyed in fires during the 1916 Easter Rising there is little credit information on these films.

There is also a disagreement on the number of reels for The Widow Malone (1916). An advertisement for The Widow Malone indicates a U.S. screening of the two-reel comedy (Rhodes 2012, n.p.). Both Irish Film & TV Research Online and a December 1917 advertisement entitled “Our Home-Made Pictures” in The Irish Limelight (16) note this as a one-reel comedy in initial releases in Ireland and Great Britain.

A Man’s Redemption, which is not included in this filmography, is listed in The Irish Film and Television Network as a four-reel 1917 FCOI film. The December 1917 advertisement in The Irish Limelight puts it in a list of indigenous pictures, but notes only that the FCOI controls the Irish rights (16).