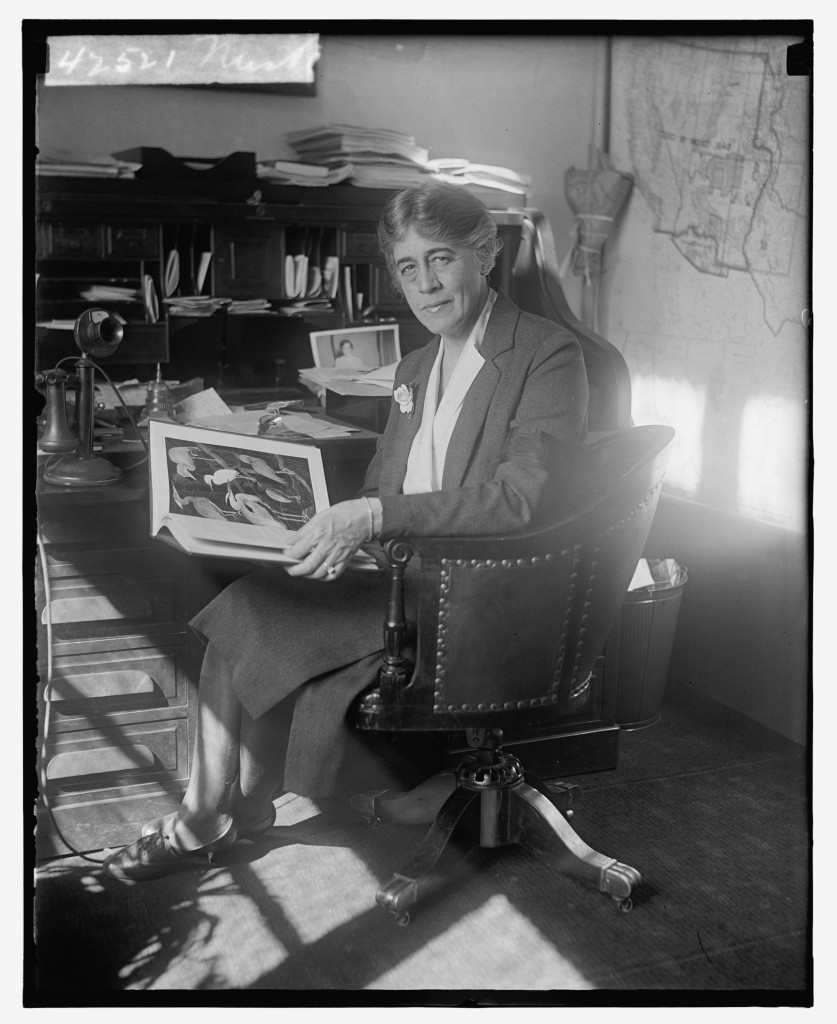 Ruth Bryan Owen was an orator, a US Democratic congresswoman (1929–1933), and a minister to Denmark and Iceland from 1933 to 1936. She was the daughter of the “Great Commoner” William Jennings Bryan, a three-time Democratic presidential nominee who retired to Florida in the late 1910s. She was married three times, first to Chicago artist William Homer Leavitt, in 1903, then to retired major Reginald Altham Owen, and lastly to the Danish captain Borge Rohde in 1936 (Vickers 59). Between 1919 and 1922, however, she devoted almost all of her energies to filmmaking in Miami, Florida, declaring in a letter dated July 22, 1921, to her friend Carrie Dunlap that she loved nothing as she loved the cinema, and she had finally found her true “métier.” She independently financed, produced, wrote, and directed the feature film Once Upon a Time/Scheherazade (1922), which is now considered lost. 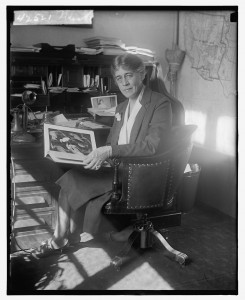 Ruth Bryan Owen,  1929. Courtesy of the Library of Congress.

Born in 1885 in Jacksonville, Illinois, Owen grew up in a household immersed in intellectual conversation and political discourse. Inspired by her attorney mother, she worked diligently on her father’s presidential campaign and wrote much of his political correspondence (Springen 11-12, 14). During World War I, she served as a voluntary nurse in the Egypt-Palestine conflict, where she met and married Major Owen. The couple relocated to her parents’ home, Villa Serena, in Miami, where Owen’s life consisted of nursing her invalid husband back to health and caring for her four children. She was a leader in the Parent Teachers Association, the Theater Guild, and the National Consumers League, and served as president of the Miami Women’s Club, speaking on a national tour circuit (Letter from Owen to Dunlap dated June 13, 1921).

In the spring of 1921, she embarked on Once Upon a Time. Conceived as an introduction to Arabian Nights and set in India, the motion picture drama involves a shah who is dethroned by his chief counselor, a sadist who uses his power to torture young women. Owen’s film opens, according to the 1922 Moving Picture World review, with the overthrow of the Middle Eastern Shah Zaman, King of Sassan, by a sadistic invader—the second Shah Wazir. The usurper begins sentencing fair maidens to be thrown to the hungry crocodiles, until the climactic moment when he discovers “the most beautiful one of all,” Scheherazade (207). Her life hangs in the balance. A detailed description in the Miami Metropolis explains that, in the finale, the original shah, who has been presumed dead, returns just in time to save the heroine and take his rightful seat of power. During a Miami screening, “the audience gave a sigh of relief when the Wazir finally killed himself…and harmony in the kingdom was restored.” The shah, believed dead, returns just in time to save the heroine from his nemesis.

One gathers from the 1922 review in Moving Picture World that the film used detailed costuming and ornate, complicated staging (207). The mise-en-scène thus evoked a mood and atmosphere that Owen herself had experienced while traveling extensively throughout the Far East, visiting, as we know from her correspondence, India, Burma, Sri Lanka, China, and Japan. Perhaps the fantasy of Far Eastern adventure was drawn as well from her service in Egypt during World War I, where her experiences attest to the risks she was willing to take to be near Officer Owen, especially once she knew he had few years left to live. Another way of reading these experiences is proposed by Sarah Vickers, who thinks that they signified her “transformation from ‘proper’ wife into activist” (50). In her life in the Far East, she gained a social awareness, Vickers suggests, confirmed by Owen’s correspondence, which reveals that she had made feminist and antiwar speeches—as well as storytelling in general—an urgent priority.

Little would be known about the making of Once Upon a Time without Owen’s correspondence with one of her closest friends, Carrie Dunlap, who was based in Illinois and had served for many years as William Jennings Bryan’s campaign treasurer. Owen describes to Dunlap on June 13, 1921, the scope of her venture into cinema:

You know the movies have always had a lure and just the atmoSpehre [sic] spoiled them for me. Well it struck me this winter that I might plunge in [and] direct movies of my own, with no objectionable atmoSpehre. I wrote scenario, raised finance for the photography, hired a camera, organized over two-hundred amateurs, played a five-reel film, direct[ed] all five hundred pictures [shots] myself, designed costumes, trained the actors.

In this and other letters, Owen expresses a genuine awe of the visual images she has created. In her June 13, 1921, letter to Dunlap, she declares, “It is amazingly beautiful. As a series of pictures, I’ve never seen a lovelier film…. I can scarcely believe the film is mine when I see it ‘projected’ on the wall above our fireplace.”

Ruth Bryan Owen clearly saw herself as a film pioneer. She demonstrated remarkable confidence and seemed to have little doubt in her ability to produce as well as to distribute an independent film from such an isolated position. There had been an active regional film industry based in Jacksonville, Florida, one that was beginning to shift toward South Florida in the late 1910s and early 1920s as dozens of New York studios brought productions to the area before the Great Hurricane of 1926 (Nelson 43-44). Among the New York studios that had brought productions to South Florida in the 1910s was the Kalem Company with which Gene Gauntier was associated. But with the industry shift to California, Owen was both amateur and outsider. Her letters claim inaccurately that an amateur feature had never before been attempted and that she was the first woman producer to make such an effort. She writes to Dunlap on June 25, 1921, that she must look “quaint trotting in with a five-reel picture” but the thousands of officials and “all their mahogany walls are not going to convince me” to give up. In the same letter, in one of her most poignant declarations, she laments that those who work in “the big movies have such a firm belief that the eternal [love] triangle or the office-business-man-with-a-cigar-in-his mouth film is the popular film [and] I know, in advance, that they will want a bit of convincing that pure beauty is marketable. I believe I will win out in the long run.” On the positive side, Owen was aware of her struggles within a male-dominated industry; on the downside, she remained unaware of the fact that other women were seeking to establish themselves as producers and directors. We know now that in the 1920s, Nell Shipman was making films independently in Idaho, and Juliet Barrett Rublee, like Owen, was staking everything on a single feature motion picture that she would attempt to distribute outside Hollywood. 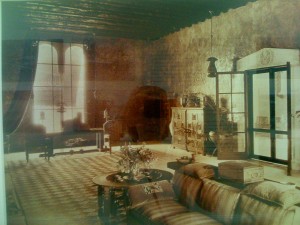 Once Upon a Time was uniquely positioned as both independent and regional. Owen imported only three professionals from New York: cameraman Dudley Read, costume designer Peter Templeton Hunt, and actor Bernhard Guttmann, who also designed the art titles. Nancy Bryan was a family member (promoted as “Miss Bryan of Miami” when the producer looked for national publicity), and Owen’s adult daughter Ruth “Kitty” Owen had a bit part. Everyone else was an amateur, including two hundred local extras whom she called the “Community Players of Coconut Grove” (Kelly 207). The emphasis on the region was further achieved by location shooting at two South Florida estates, the James Deering Estate in Coconut Grove and William J. Matheson’s Mashta House in Key Biscayne, which Owen would have had access to because of her social standing. Mashta House, for instance, built to resemble an actual home on the Nile River, was meant to appear as though it was floating magically above the water (Blank 2). Recent evidence confirms Mashta House as the film’s central location and that Owen herself may have taken the only known series of still photographs of the interior of the house, which was destroyed in the 1940s (Lane). 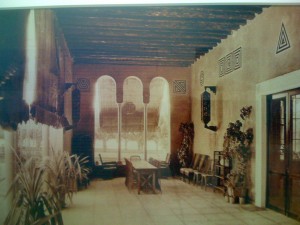 Owen financed her film solely through the income she earned on the grueling public lecture circuit, a situation she found herself in because her family had disinherited her for marrying her first husband, the artist (McKenzie 107-08; Vickers 59). While it is difficult to know all of the distributors she approached, there is evidence that she met with Famous Players-Lasky and Pathé. It was not until she gained the support of the General Federation of Woman’s Clubs, however, that she was able to secure a distribution arrangement with the Society for Visual Education, which also agreed to distribute all of her future films, we learn from letters dated May 20 and June 4, 1923. She had high hopes for her filmmaking career, especially after an encounter with Douglas Fairbanks, Sr., and contact with D.W. Griffith, who helped her edit on a trip to New York, and an invitation to travel to Germany to learn Expressionist filmmaking, events referred to in her November 5, 1923, letter to Dunlap. Perhaps because of the difficulties of finding distribution and the time demands of her political speaking engagements, however, Owen never attempted to produce another film after Once Upon a Time. Her decision to forgo further projects might also have been related to the mixed to negative reception it received in the motion picture trade press. A 1922 reviewer for Moving Picture World wrote that “If a more ordinary, more conventional theme had been chosen, there would have been a better chance to conceal the marks of the amateur… [and to appreciate] the romantic and picturesque, which the producer undoubtedly possesses” (207).

Considering the range of materials in the Dunlap papers, further areas of research might include a more detailed analysis of how Owen’s hopes for filmmaking coincided with her political agendas, which included suffrage, prohibition, and preservation of the Everglades. Given her fervor for politics, her decision to place her debut motion picture firmly within the genres of fantasy and romance points either to a desire for escapism or a complex perspective on the intersection between reality and imagination. Furthermore, as with many women of her time, her correspondence with Dunlap romanticizes her adventure yet speaks to the challenges she faced as well as the support she received in caring for her husband and children, responsibilities that competed with her female friendships and career ambitions. In addition to those of wife, mother, and friend, Owen wore the many hats of University of Miami professor, congresswoman, ambassador, world traveler, environmentalist, women’s advocate, published author of six books, and, of course, independent filmmaker, making her a very significant figure in women’s history as well as motion picture history.