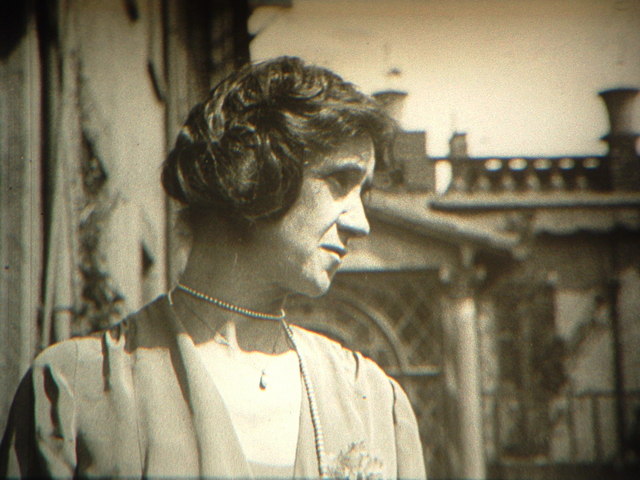 Feminist activist Juliet Barrett Rublee worked with Margaret Sanger in the US birth control movement and also produced perhaps the first US feature motion picture made entirely in Mexico—Flame of Mexico (1932), also known as The Soul of Mexico, The Heart of Mexico and Alma Mexicana. Made at the dawn of the sound era, Flame of Mexico was silent with a musical score. It is an unusual film that began with Rublee’s aspirations to make a travelogue, but ended up a historical melodrama, and thus in the extant print we see the conventions of both at work. For the most part, Rublee and Flame have been left out of written histories of film although both are mentioned briefly in Aurelio de los Reyes’s Filmografía del cine mudo mexicano and in Rangel and Portas’s Enciclopedia Cinematográfica Mexicana. Yet both are central to understanding the conditions under which a distinctive alternative visual discourse on Mexico became available to American as well as Mexican viewers. 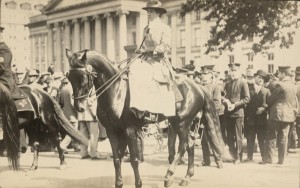 Mrs. Juliet Barrett Rublee as Grand Marshal of the procession organized by the Congressional Union for Woman Suffrage. Courtesy of the Library of Congress.

Rublee was an avid traveler prior to shooting Flame of Mexico. She visited various locations in Mexico accompanied by Captain John Noel, known in the United States for his lectures as well as for having photographed George Mallory’s fatal 1924 expedition to Mount Everest. Over the course of two and a half months, Rublee and Noel shot fifteen thousand feet of panoramic views. Some of this initial travelogue footage appears in Flame of Mexico. In an unsigned typescript titled “ Mexico City, Dec.,” most likely written by Rublee herself in December 1929, the goal of Flame of Mexico is stated as: “to show the world the real Mexico.” However, because travelogues, shown to small audiences in lecture halls, were considered educational but not entertaining, Rublee instead created a fictional narrative that could engage a wider audience, a strategy that increased her chances of recovering the $150,000 personal investment she made in the film, referenced in the New York World-Telegram review (n.p.). 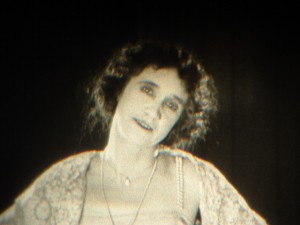 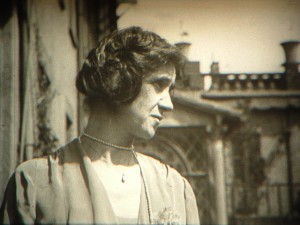 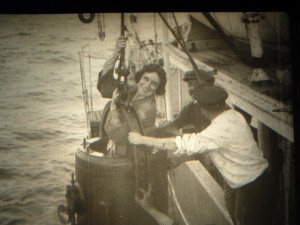 Flame of Mexico is set in 1910 on the eve of the Mexican Revolution during Francisco Madero’s uprising against dictator Porfirio Díaz. The film’s contemporary background, however, is what was then called the “oil problem,” which reached its peak of tension during the mid-1920s, we learn from Stanley Ross (506–528). During the Díaz regime, land concessions, including rights to the subsoil, had been granted to both foreign and national companies for unlimited periods. The 1917 Constitution, an ideological product of the Mexican Revolution, changed the way in which land ownership was understood, and this change affected the exploitation of the country’s natural oil supply. Article Twenty-Seven of the Constitution established that, while land could be held as private property, the subsoil could not be privately held because it was the property of the nation. Previous presidents had avoided enforcing this provision, but in 1925, President Plutarco Elías Calles placed limits on oil concessions, creating tension between US oil companies and the Mexican government. In 1928, Calles’s oil laws were amended by US ambassador Dwight Morrow, who resolved the dispute by adding the word “confirmatory” to those concessions that were acquired before 1917, thus leaving the question of ownership open to negotiation (Arredondo 88).

Rublee’s experience in Mexico is directly related to this chapter in US-Mexico diplomacy. When Morrow became ambassador, George Rublee, Juliet’s husband, went to Mexico as Morrow’s legal adviser, accompanied by his wife, who arrived there on April 20, 1928 (Arredondo 88). When Juliet Rublee wrote the script for Flame of Mexico that same year, she incorporated the “oil problem” into the romantic narrative, creating what could be called a political melodrama. In Flame of Mexico, Rafael, an educated indigenous campesino and follower of Madero, falls in love with Alicia, the daughter of Don Rodrigo, a rich landowner and Rafael’s adversary in the local elections. The obstacle to the couple’s love is US villainous oil investor Thorton who works as Don Rodrigo’s foreman. Flame of Mexico portrays Thorton’s forced marriage to Rosita (Alicia Ortiz) as opportunistic, while it champions the romantic union between Rosita and Rafael (Donald Reed). The film is thus an implicit endorsement of Mexican sovereignty, including the nation’s right to control its oil resources.

Flame of Mexico blends ethnography and fiction, weaving Mexico’s picturesque scenery and diverse population into its romantic narrative, combined as well with staged ethnographic spectacle. The lead cast members are all Mexican, with the exception of Thorton as well as his helper, with secondary roles played by untrained actors wearing their own traditional clothing, a detail that adds another layer of ethnographic realism. Most remarkable today are the high production values of the 35mm cinematography, the work of acclaimed German-born Hollywood photographer Jules Cronjager, whose name is on the film. Flame of Mexico received, for the most part, positive reviews in Mexico, in El Nacional and El Universal Gráfico, as well as in the United States, yet there is some evidence that Rublee’s portrayal of Mexico’s struggle for economic sovereignty conflicted with the opinions of some US moviegoers. Writing in the New York Herald Tribune, one critic expressed his disapproval of the film’s “ambition to be propaganda” (n.p.).

Although Rublee did not direct Flame of Mexico herself, her role as the film’s author is clear in the information that exists regarding its production. She wrote the script for Flame of Mexico in 1928 and hired a four-man Hollywood crew to photograph it under her supervision. In a letter to her friend Margaret Sanger dated July 20, 1929, she referred to herself as the film’s “presenter,” a role that involved many tasks: “I have to be Production Manager, Business Manager, Assistant Director—Location & Casting director—girl of all work, buying things, funding them, running errands, bargaining to get things cheaper, also projector of the finished film, threading & running it…” Because the director, David Kirkland, “seems to have no initiative or perhaps no imagination or versatility or vitality,” she writes, she felt obliged to step in herself.

Rublee’s letters to Sanger, found in the Sophia Smith Collection at Smith College, also contain information regarding the film’s production and the difficulties of filming on location. The letters show that she began production in April 1929, a year after her arrival in Mexico. A comment to Sanger in her July 1929 letter indicates that she intended to make money with her project: “I hear there is a great demand for Mexican pictures & they are making fake ones in N.Y. and Hollywood. So if it could be done it might make a trillion!” To produce a film on location, however, involved circumventing many problems, such as Mexican censorship restrictions and the absence of studio production facilities. The hardest part proved to be financing the film.

Unfortunately, Flame was produced and edited during the Depression. The salaries and travel expenses of Rublee’s crew amounted to $2,925 per week, which became very costly when bad weather extended the shooting time. On June 28, 1929, Rublee had complained to Sanger: “No one is willing to take the risk with me of helping with even one penny!” In spite of these obstacles, Flame of Mexico premiered in Washington DC on June 3, 1932; it was shown in Mexico City in October 7, 1932, and in New York on February 4, 1933. Wider distribution, however, never materialized. Unable to sell her film in a post-Depression market, Rublee lost her entire investment and never made another motion picture.

That Flame of Mexico was an independently produced motion picture without distribution meant that only a few prints of the film would have been struck—another reason for its absence from most film histories. Rublee, however, left ten cans of 16mm home movies and Flame of Mexico preproduction material that are now part of the Rublee Collection at the United States Library of Congress. This footage is filed by name and date, but in reality it is quite disorganized—the same sections appear in footage bearing different dates, and dates don’t correspond to events shown in the footage. The material, however, can be divided into two phases—before and after Rublee’s 1928 arrival in Mexico.

Probably the earliest footage can be dated 1925 by means of reference to the Kodak edge numbering. This footage depicts Rublee’s expedition to southern Italy in search of the continent of Atlantis, as well as other travels and leisure activities. The second group of films, made in or after 1928, includes home movies of Charles Lindbergh’s flight to Mexico City in The Spirit of St. Louis and a picnic at the home of Ambassador Dwight Morrow in Cuernavaca, Mexico, as well as outtakes and preproduction material from Flame. This home movie footage shows Rublee’s taste for adventure combined with an urge to document her travels on film. With Flame of Mexico, in contrast, she transcended the amateur travel genre and made an important, if unjustly overlooked, contribution to both United States and Mexican film history.