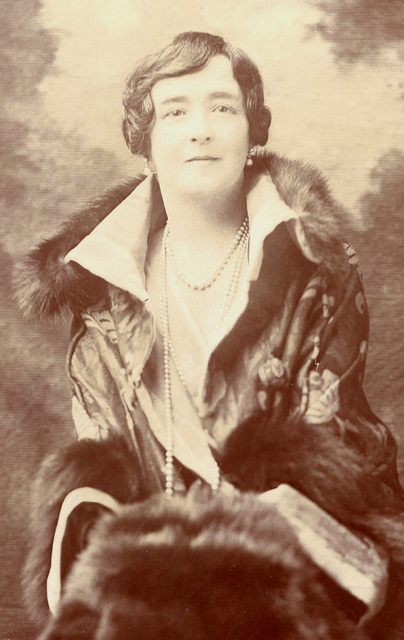 Lucy, Lady Duff-Gordon, professionally known as “Lucile,” was a couturière to wealthy European and American women as well as actresses in London, Paris, and New York when she began to design costumes for film stars. As early as 1913, she dressed Alice Joyce in Kalem’s The American Princess (1913). In addition, Lucile’s New York and London salons provided the setting for several motion pictures in which fashion show scenes were filmed. These included: The American Princess (Kalem, 1913), The Whirl of Life (Cort Film, 1915), The Spendthrift (George Kleine, 1915), The Amateur Wife (Famous Players-Lasky, 1920), and Walls of Prejudice (Gaumont, 1920).

In 1890, Duff-Gordon began dressmaking in London. In 1893 she opened her first salon, Maison Lucile, which was incorporated as Lucile, Ltd., in 1903. After that she capitalized on her success and opened studios in New York in 1910 and Paris in 1911. In 1915, Madame Lucile, as she was often called in the press, inaugurated a second American branch in Chicago. Lucile was a celebrity, and her title gave her career an added prestige. In addition to designing clothing and costumes, she also wrote about fashion and manners in columns for Good Housekeeping (“Her Wardrobe,” 1912-1913), Harper’s Bazaar (“The Last Word in Fashions,” 1913-1921), the Ladies Home Journal, and the Hearst newspapers syndicate, from 1910-1921. In England she wrote a fashion advice column “Letters to Dorothy” for the London Daily Sketch from 1922-1928. She appeared on screen with her designs in newsreels of the period. Briefly during World War I, she created mass-produced ready-to-wear styles for Sears, Roebuck and Co. Like so many of the stars she dressed, Lucile provided commercial endorsements for a wide range of products such as petticoats, brassieres, corsets, textiles, perfume, shoes, and even automobile interiors. In fact, she was so well known that she could be parodied, as she was in the skit “Lady Bluff Gordon’s dress making establishment,” seen in the musical revue “The Passing Show of 1916,” which played at the Winter Garden in New York City, according to Green Book Magazine (422).

Lucile knew well the requirements of stagecraft, and first began to experiment with the medium in 1897, and in 1904 she presented her seasonal collections by mounting elaborate fashion shows complete with stages, ramps, curtains, limelight, and music. In 1917, Lucile took her models to Broadway as well as on a vaudeville tour with a musical fashion parade fund-raiser, with proceeds going to relief funds for French war refugees. “Stage dressing demands accentuation!” Lucile exclaimed in Harper’s Bazaar in 1914. “The actress moves under special conditions of light that exist nowhere else and under auditory conditions as well…. her dresses have to be of broader effect and more vivid coloring” (34). Duff-Gordon designed costumes for some of the most prominent theatrical actresses of her day, including Sarah Bernhardt, Lily Langtry, Ellen Terry, and Lily Elsie, helping Elsie to mold her image. In her autobiography, Discretions and Indiscretions, Lucile recalled a conversation with the play’s producer, who made the following request: “She [Elsie] has never done anything to speak of… but I know she is clever… You must give her a personality, and coach her so that she can keep it up” (109). Lucile also designed for the Ziegfeld Follies, where she helped to establish the prototype of the American showgirl.

As her actress clients began to make motion pictures, Lucile adapted her designs to suit the screen, between 1913 and 1930 working with Irene Castle, Billie Burke, Mary Pickford, Norma and Constance Talmadge, Clara Kimball Young, Pearl White, Corinne Griffith, Lillian Gish, Gloria Swanson, and Marion Davies, among others. She contributed costumes to more than eighty films, causing Motion Picture Magazine in 1916 to remark: “Nowadays it is an everyday affair for a prominent actress to blossom forth in a Lucile frock” (n.p.). A 1916 issue of Pictures and Picturegoer tells us Lucile contracted briefly with Essanay and the World Film Corporation (58).

Working collaboratively, couturière and star exerted influence on these films by expressing character traits through costume features. When Lucile worked with actresses, she designed their costumes to fit narrative as well as technical requirements. When Mae Marsh, for instance, prepared for The Cinderella Man (1917), she was advised to “go to Lucile, explain the story to the designer and let her show you the kind of costumes she would suggest.” Lucile made two copies of the main dress, one in green and the other in grey, to ensure its effectiveness under varying conditions of illumination, the actress recalled in her book, Screen Acting (70–71). Lucile’s use of sheer fabrics, pale colors, soft drapery, dramatic asymmetrical effects, and tiny, hand-wrought silk flowers as trimming became hallmarks of the ultra-feminine, romantic mien that was so sought after by her society and theatrical clients, touches that made a Lucile gown immediately recognizable to female audiences. In 1918, Lucile designed costumes for Clara Kimball Young, who starred in The Reason Why, a film based on a novel written by Lucile’s sister Elinor Glyn. As Lucile would help to define femininity through her fashions in the 1910s, her sister, as Hollywood producer-writer, would contribute “It” and the “It Girl” to American popular culture of the 1920s.

Due mainly to mismanagement, Lucile Duff-Gordon’s business empire began to falter after World War I, and she died of breast cancer in 1935. While she was the most prominent of the couturieres who designed costumes for actresses in the early years of cinema, Lucile was not alone. Madame Frances designed costumes for Mary Pickford and Norma Talmadge, while other women designers, such as Clare West at Paramount Studios and Sallie Milgrim, joined the ranks of Henri Bendel, Charles Hickson, Herman Patrick Tappe, Travis Banton, and Gilbert Adrian in collaborating with actresses on their costumes for stage and screen in the United States during the silent period. There is still an enormous amount of work to be done to construct a fuller history of costume for silent motion pictures from the 1890s through the 1920s. In order to flesh out the record, film historians need to plumb fashion trade papers like Women’s Wear Daily, women’s magazines like Vogue, Harper’s Bazaar, Ladies Home Journal, and the Delineator as well as national and local newspapers where actresses and designers were often featured.

As a costume designer it is often difficult to confirm all titles to which Lady Duff-Gordon may have contributed. If she is credited in films, most likely she is listed as Lucile. Her participation in the films of Norma Talmadge and Irene Castle is assumed, as they wore her fashions exclusively in the late 1910s. The film A School for Husbands is listed as being extant by the author, but is not in the FIAF database. The archived prints of The Moth and Arms and the Girls are incomplete.