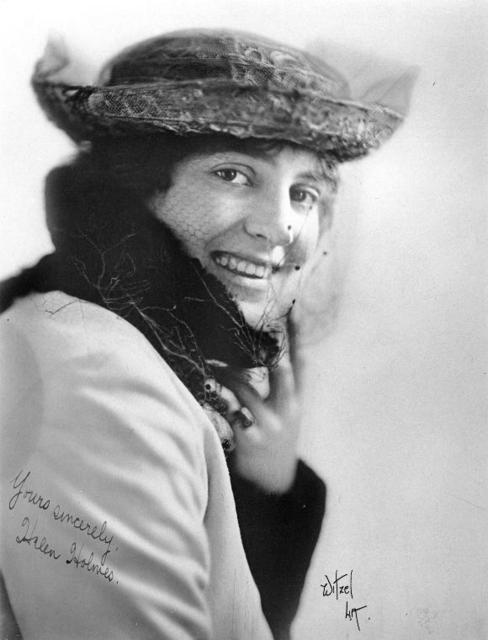 Helen Holmes became a star playing the part of the fearless railroad telegrapher “Helen” in the Kalem Company’s long-running, stunt-driven serial The Hazards of Helen (1914–1917), and continued to make action films through the decade as an independent writer and producer. Not only were her films successful at the box office, but they featured some of the most heroic female images in silent cinema as she leapt to the top of speeding trains and handled pistols with ease. Did these images—at least some of them—originate with Holmes? Certainly Helen Holmes needs to be situated within a tradition that included the American branch of Pathé Frères Company’s Pearl White, Selig Polyscope Company’s Kathlyn Williams, and Universal Film Manufacturing Company’s Grace Cunard. Some would argue that Holmes carried on at Kalem in the tradition of Gene Gauntier, who had physically risked so much in the Girl Spy series. But Gauntier ’s memoir gives far more information about how she wrote scenarios and set up stunts for her character while at Kalem. With few sources other than extant films and popular and trade magazine discourse, it is difficult to discern the exact role Helen Holmes played behind the camera.

Helen Holmes. Courtesy of the Library of Congress.

Holmes’s well-publicized status as the daughter of a railroad engineer implicitly suggests that she shaped the character of “Helen.” Holmes told Green Book in 1916 that since men were loathe to put a woman in danger, “if a photoplay actress wants to achieve real thrills, she must write them into the scenario herself” (741). The 1915 Signal serial The Girl and the Game, which she co-produced with director-husband J. P. McGowan, was full of what she called “real thrilly action”: the intrepid “Helen” saves her boyfriend and father from a train wreck, saves the former again, this time from a burning locomotive, saves the railroad from financial ruin, recovers the payroll from thieves, saves her boyfriend and another male friend from another train wreck, rescues a male character from a lynching, captures more thieves, saves two men from a mine cave-in, recovers more stolen money, and uncouples a freight train to prevent a “terrible wreck.” All this she does in The Girl and the Game, according to the “Story to Date,” from extant Episode 15, “Driving the Last Spike.” Contemporary audiences can see for themselves exactly how many thrilling chances the Helen character takes in Episode 13, “Escape on a Fast Freight,” and Episode 26, “The Wild Engine,” of The Hazards of Helen series, both available on DVD from the National Film Preservation Foundation. We have reason to believe that at least some of the breathtaking stunts were Holmes’s invention, as she told the New York Telegraph in 1915 that while Frank Hamilton Spearman authored the script, she had to adapt his story to make “the thrills cascade throughout.” In an unpublished typescript from 1916, “by” Holmes, she is made to say that “the thrills are director McGowan’s inventions,” and that she followed his direction. This last account, although credited to Helen Holmes, was written by Terry Ramsaye, then the director of publicity for the Mutual Film Corporation, who would later write the earliest history of the American film industry, A Million and One Nights (Ramsaye 1926). Holmes did appear physically able to execute her own stunts. In 1917, the Moving Picture World reported that Holmes staged a head-on railroad collision for the California State Fair, jumping from a moving train to a moving car in front of a live audience (257), and in 1919, arrangements were made for Holmes to “loop the loop” in an airplane over Broadway and 42nd Street to promote The Fatal Fortune, a stunt “which will establish her as an ‘ace’ among serial stars” (871).

It was when the Mutual Film Corporation offered Holmes and McGowan financing and distribution that they left Kalem and created the Signal Film Corporation in 1915, starring Holmes in similar, action-centered roles. According to a later Moving Picture World account, the only serial produced under this arrangement, The Girl and the Game, grossed $2,253,000 (298). When Mutual dissolved in 1918, so too did Signal. McGowan went back to Universal, but independent producer S. L. Krellberg created the S.L.K. Serial Corporation for Holmes and made a highbrow mystery serial, The Fatal Fortune (1919), which was not popular. In 1919, Holmes signed a contract with producers Harry and Albert Warner (of the not-yet-famous Warner Brothers) to make serials under the Helen Holmes Production Corporation, according to Variety in 1920. However, the Warners made her first film, The Danger Trail (1920), into a feature, hoping it would finance later serial production. Ultimately Holmes herself loaned the Warners $5,000 to finish the jungle-themed serial The Tiger Band (1920), and then sued them after receiving only partial repayment, as Variety reported. With distribution agreements tied up in court, The Tiger Band was released on a states-rights basis with little advertising or promotion, and did not do well at the box office. The importance of advertising and distribution in the case of the serial queens cannot be emphasized enough, and could be dramatized by a comparison between the careers of Holmes and that of the more widely known White, whose international renown was made possible by French Pathé Frères’s worldwide distribution outlets and Hearst paper promotion. Also, while White was safely ensconced at an established company, Helen Holmes, after leaving the Kalem Company, was buffeted around as an independent producer between 1915 and 1920. After The Tiger Band, Helen Holmes retired as a producer. She continued to act in character roles under the direction of McGowan. They divorced in the early-to-mid-1920s, and Holmes retired from the screen after marrying cowboy stuntman Lloyd Saunders in 1926 (1950, n.p.). She returned to Hollywood when their cattle business failed and played a small role in Poppy, a 1936 W. C. Fields film (Carroll n.p.). After working as a Hollywood animal trainer in 1945, she ran an antiques business out of her home (“Star of ‘Silents’ Now Trains Dogs” n.p.). When Holmes died of a heart attack at age fifty-eight, Rose “Helen” Gibson, the actress-producer who replaced her on the Hazards of Helen after episode 48, was by her side (1950, n.p.).

1. Helen Holmes as Actress and Co-Producer

3. Helen Holmes as Actress and Screenwriter

Excerpt of The Hazards of Helen episode 13 (1915): http://www.filmpreservation.org/dvds-and-books/clips/the-hazards-of-helen-episode-13-1915-clip

Credits for Helen Holmes were collected from Paul Spehr, AFI, Richard E. Braff, FIAF, and J. P. McGowan, a Biography by John J. McGowan. There are a few titles that can’t be confirmed, and a good third to half of the films do not appear in Spehr, but do appear in Braff. The Helen Holmes version of The Lone Hand is listed in AFI as being released in 1922. FIAF’s entry for The Lone Hand is a mixture of cast from both the 1922 and 1919 versions of the film. It is therefore very uncertain what is actually held by the Library of Congress and UCLA. The film Kaintucky Bill is listed in Braff as Kentucky Bill. Two films are not listed in any of the standard sources, but appear in other references books. Conductor’s Courtship, which is attributed to McGowan and Holmes, as is listed in Spehr as a Kalem film and mentioned in the McGowan bio. However, both entries are listed with question marks as to whether they both worked on the film. Hide and Seek is also not listed in any standard source, however there are stills from the film, where she appears alongside Mabel Normand and Nick Cogley. The author states that Helen Holmes appeared in the Danger Trail for Warner Bros. However, AFI, Braff, FIAF, and IMDB do not list this title. The site www.silentera.com suggests that the film was directed by Gilbert P. Hamilton, but it does not confirm this. It is possible that The Danger Trail is one of the titles of The Tiger Band series, which was directed by Hamilton.