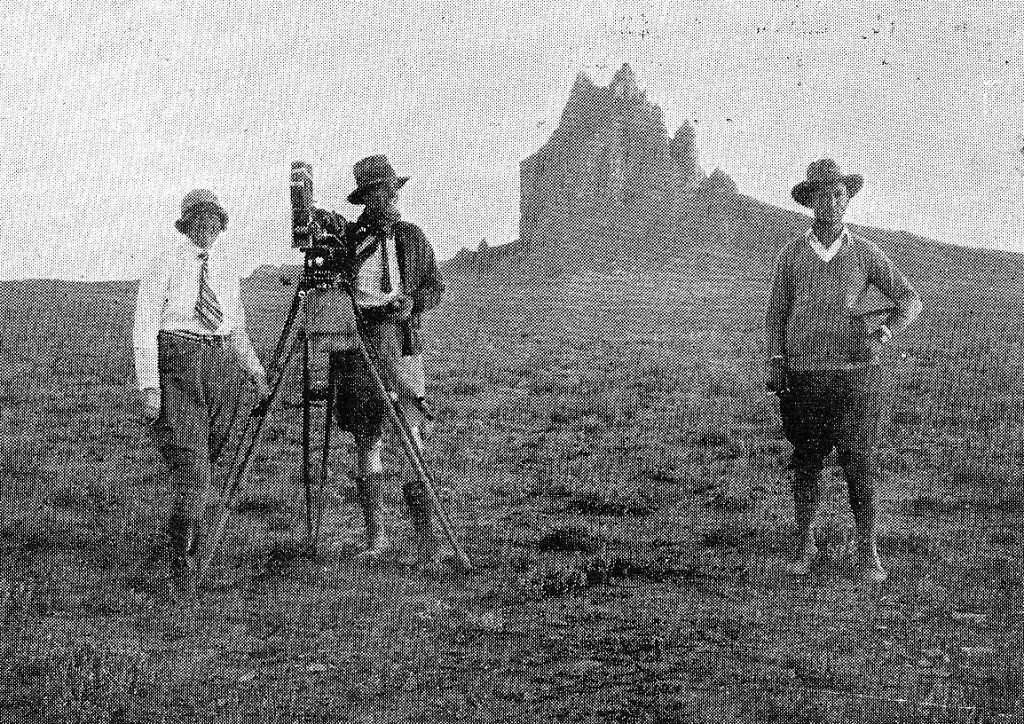 Screenwriter, short film director, and best-selling novelist, Elizabeth Pickett began her career in motion pictures directing a series of documentary films for the American Red Cross near the end of World War I. Much later, in 1942, she published an extremely successful novel (fittingly entitled Drivin’ Woman) as Elizabeth Chevalier, her maiden name. In interviews given around that time, she frequently mentions her early experiences working in film as crucial to her work as a novelist (although the novel does not deal with women in the film industry). But by the time she published the novel, much of her earlier work in the silent film industry had already been forgotten.

Following the few traces left by Elizabeth Pickett in the trade presses during her earlier career, where she was profiled by Moving Picture World as having the “highest aspirations” to direct and to write films, we can reconstruct a biography, important to us as a study of an exception in these years—the Eastern women’s college graduate (29). But she was not herself an Easterner like Beulah Marie Dix, who graduated from Radcliffe College, or Marguerite Bertsch, who attended Columbia University. Pickett left the family farm in Lexington, Kentucky, in the mid-1910s to attend Wellesley Women’s College where, according to a 1942 article in Louisville’s Courier-Journal, Madame Cheng Kai-shek was amongst her classmates (n.p.). She earned her degree in 1918 and soon after began working as a publicist and historian for the American Red Cross where, according to the narrative of her life woven together in the 1927 Moving Picture World interview with Tom Waller, she had her “first taste of film work” (29).

After writing eleven hundred pages of The History of the American Red Cross published in 1923, Pickett was commissioned to shoot several propaganda films for the nonprofit organization. According to the article, the next year she landed a job with Fox Films and told producer Winfield Sheehan that she wanted to “write and direct my own pictures.” In the same interview, Pickett boldly states that while she was working on these short films for the Red Cross, she became convinced that “in this business of ours the writer will have to be the director as well, in order to survive” (29). This is a somewhat prophetic statement in light of what we know of the fate of women in the silent motion picture industry. We can glean from the 1927 interview that Pickett as a writer understood her relationship to the medium of film. Describing the work she did for Fox Films between 1923 and 1926 writing and directing a series of variety shorts, she reveals that her aspiration was to make an analogy between writing and cinematography. She tells her Moving Picture World interviewer, “I have written with the camera on some thirty or forty Varieties and I can see that the whole trend of production today, both from the standpoint of real economy and artistry, is with the person who writes with the camera” (29). 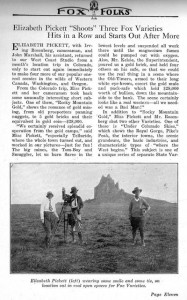 Pickett’s work was situated at the overlap between documentary and narrative fiction filmmaking. And it was her keen sense of location and landscape in films such as King of the Turf (1923), her first Fox Variety short, that apparently inspired John Ford’s early Western Kentucky Pride. Her extensive work shooting much of the Western American landscape for Fox later led to another short scenic film Cliff-Dwellers of America (1925), which explored the lives of Navajo Indians living around Colorado’s Mesa Verde National Park. A revealing article published in the studio house organ Fox Folks tells us that the local Native Americans were used as extras to “give the impression of how the ruins looked when peopled by this prehistoric race that lived before the dawn of Christianity” (11-12). Perhaps this interest in Native American life and the Western vista informed her screenwriter’s vision of the fiction feature film Redskin, produced and distributed by Paramount Famous Lasky and directed by Victor Schertzinger in 1929. But the film would also mark the culmination of her career in motion pictures. An excellent quality color 35mm print of Redskin, however, survives, and a contemporary revival at the Giornate del Cinema Muto in Pordenone, Italy, allowed film historians to rediscover this late silent era example of what might be called an ethnographic Western—part documentary of the lives of Pueblo dwellers and part narrative fiction. We may well wonder what kinds of films this drivin’ woman would have made had she had more opportunity to realize her high aspirations.

Elizabeth Pickett’s Filmography is known to be incomplete. While Kentucky Pride and The Shamrock Handicap are extant on FIAF, Pickett is not listed as a writer. Ally Acker claims she directed approximately 40 Fox Variety short films, but a complete list has not been compiled. One installation of the Fox Variety series—Cliff Dwellers of America—was recently restored and shown at the Giornate del Cinema Muto in Pordenone, Italy, however the print is missing both credits and end titles, and FIAF does not identify a director.