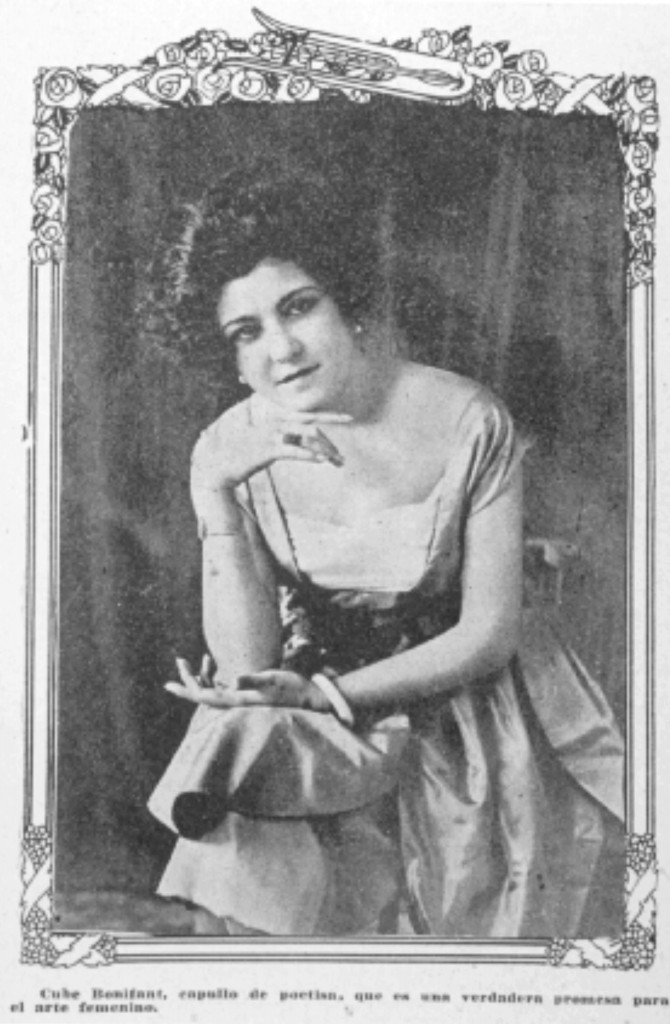 Born in Mexico City in 1904, Cube Bonifant published her distinctive film criticism in newspapers and magazines throughout the early twentieth century. Her criticism covers the end of the silent film era, the transition from silent film to sound motion pictures, and the birth of the sound motion picture industry in Mexico. The need to learn more about the early days of film criticism—especially film criticism written by women—brings one to examine Bonifant’s work. While she was intent on attacking the Hollywood film industry, she had a journalist’s commitment to objectivity. Her colleagues such as Catalina D’Erzell criticized her for her biting, mocking style while at the same time praising her writing. 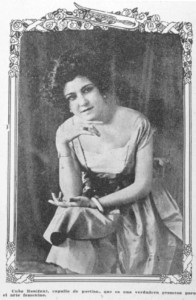 As a young woman, Bonifant published romantic poetry in two national newspapers: Revista de Revistas and El Ilustrado. In 1921, she began to write advice columns that criticized the lifestyles of bourgeois women of her day in the magazine El Universal Ilustrado and later wrote an advice column for men as well. Both columns enabled her to receive and to answer correspondence from readers who gave vent to their troubles by writing to her. Bonifant delighted in replying to each of her faithful correspondents in her acid, mocking style. On February 10, 1927, she was invited by the editor of El Universal Ilustrado to shape her caustic style into film criticism, which she did under the pseudonym Luz Alba. Her articles appeared every week in the section El cine visto por una mujer, which in 1928 was renamed Opiniones de una cineasta de buena fe. Beginning in 1928, Bonifant wrote about Mexican and foreign motion picture stars in the magazine Rotográfico under the pseudonym Aura Stella. She also published columns in the weekly Ilustrado and the magazine Todo until 1940.

Bonifant’s caustic style of film criticism distinguished her from the other female critics and film writers of her day such as Adela Sequeyro, Cecilia del Villar, and Elena Sánchez Valenzuela. What film critic Ángel Miquel would call Bonifant’s “objective” approach appears in her reviews of Hollywood films, which verged on the pejorative (Miquel 1995, 213). This harsh style of observation and her tendency to “call a spade a spade” were what distinguished her from the other female critics of her era. She was especially critical of American filmmakers’ lack of cross-cultural knowledge, which was evident whenever they had to recreate other nations’ folklore and customs. Neither did Hollywood’s faulty history and geography escape her. These observations are summed up in her 1927 review of Edmund Goulding’s Paris (1926) in El Universal Ilustrado:

Since Americans are ignorant to the extreme, they can rarely do a good job of handling storylines that take place outside the United States. For example (and we have seen this in countless films), Americans think that all men in Argentina have moustaches, and that bullfighters and women in elaborate Spanish-style garb fill the streets; that all Brazilian men have bushy eyebrows; that in Mexico all men dress in traditional charro costume… They think Russians must have beards; that Frenchmen seem effeminate; that German men are all bald; that Spanish women must all be dancers, and other things that are equally astonishing (22).

Not limiting herself to film criticism, Bonifant also acted periodically. At the age of nineteen she had a starring role in La gran noticia (Carlos Noriega Hope, 1922), and described her experience in a feature article published in 1921 in El Universal Ilustrado:

I slip away to my dressing room and begin the difficult task of putting on my makeup. This is one of the many annoying things about film acting… And then you hear the voice again. We’re going to do a scene. I have to laugh my head off, even though I’m in such a terrible mood… My God , how am I going to do it? This is a ridiculous farce… I find it impossible to do these things when the spirit is otherwise inclined. I definitely won’t be able to do this scene. Making a movie is so frustrating! I don’t think it’s worth it to get up at five in the morning to act out a few scenes that I’ve studied, and I don’t think it’s worth it to ruin my skin with makeup, it’s just not worth it (10).

Even though she never considered herself an actress, Bonifant returned to film acting as an extra in Santa (Antonio Moreno, 1931).

The renowned Mexican actresses Lupe Vélez and Dolores del Río, who both became Hollywood stars, were the targets of Bonifant’s harshest criticism. She constantly compared the two stars unfavorably with other Mexican actresses, who, in her opinion, outclassed them. In her Ilustrado review of the US film Así es la vida/Such is Life (George Crone, 1930) she praises Delia Magaña, who had only a supporting role, comparing Magaña’s onscreen appeal with that of Lupe Vélez. Delia Magaña, who, although she is “ugly,” transcends this with “natural charm” and should stay this way instead of cultivating the arrogance of “La Vélez,” she writes (Bonifant 1930, 28). Dolores del Río, whom she dubbed “Lolita del Río,” was “physically unattractive and artistically insignificant” and could not measure up to the role of the mistress of Louis XIV in Madame DuBarry (1934). Although she praised Andrea Palma, whom she preferred to Vélez and del Río, Bonifant criticized the actress for imitating Marlene Dietrich, asking in her review of the Mexican release La mujer del puerto/The Woman of the Port (Arcady Boytler, 1934): “What is the point… of trying to be like Marlene both in and outside the movies?” (28).

As a critic, Bonifant was feared and loved at the same time, and this duality gave her a special position within the field of journalism as well as in the world of cinema. She had countless readers, and her critical articles were always in print, a clear indication of her ongoing popularity. In a 1923 interview published in the newspaper El Demócrata, the reporter profiled her razor-sharp wit and ability to find the irony in everything:

This small, delicate woman is both charming and naturally loquacious, and she has a sharpness that allows her to turn everything into irony, to see the good side of things, and to season her commentary with common sense by finding a pliant, favorable angle to serve as the instrument of her wit (12).

In her twenty-two-year career as a film critic, Bonifant covered many aspects of motion pictures, exploring the links between the setting of a film and its historical context as well as the connections between trends, genres, and authors. She recorded how cinema evolved as an art form as well as how audience tastes and interests changed in the first half of the twentieth century. Her criticism is now the basis for the work of such film historians as Emilio García Riera, Aurelio de los Reyes, and Ángel Miquel, a legacy she has left for the study of silent and sound films of her era. She fought one of the last battles between film critics who considered cinema an art and old-style movie gossip columnists. After thirteen years as a film critic, Bonifant was described in the film magazine Hoy as “the most successful humorist in our medium, serene, ironic, with a clear propensity for precise, biting, wounding commentary” (25).