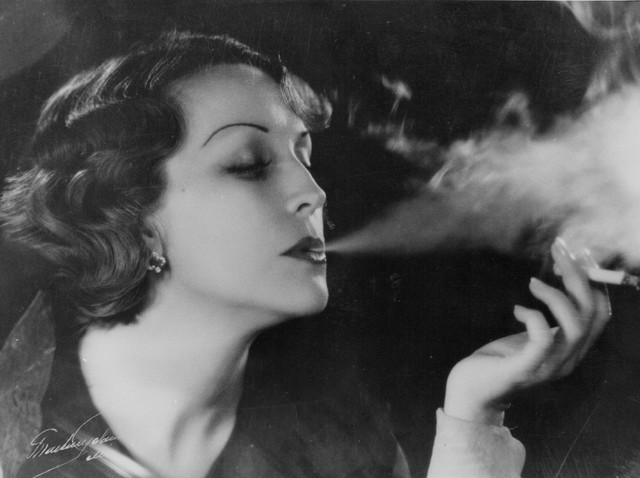 Adela Sequeyro was born in the port city of Veracruz, Mexico, to Federico Sequeyro Arreola and Virginia Haro y Gutiérrez Zamora. The Mexican Revolution, which extended from 1910 to 1917, devastated the family fortune and compelled them to move to the town of Cuautitlán on the outskirts of Mexico City. Sequeyro studied at a French-English school in the capital and, at an unusually early age, began a career in cinema journalism in 1921.

The recent discovery of well-preserved 16mm copies of two films directed by Adela Sequeyro —Más allá de la muerte/Beyond Death (1935) and La mujer de nadie/Nobody’s Woman (1937)—sparked an overdue reevaluation of Sequeyro’s importance in the history of Mexican cinema. Before the discovery of these two films, Sequeyro was known primarily for her acting roles in Mexican silent film melodramas and as a journalist whose work appeared in many Mexico City newspapers and periodicals. 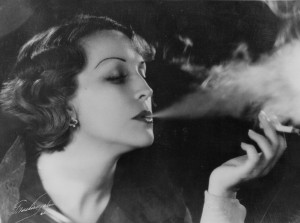 In the 1920s, Sequeyro began appearing occasionally in films opposite Ricardo Mutio, a well-known theatrical actor in Virginia Fábregas’s company. In 1923, Adela Sequeyro—or Perlita, as she was known—starred in El hijo de la loca/The Crazy Woman’s Son (José S. Ortiz 1923), followed by leading roles in at least five other silent features: Atavismo/Throwback (1923) and Un drama en la aristocracia/A Drama in the Aristocracy (1924), both directed by Gustavo Sáenz de Sicilia; Ortiz’s No matarás/Thou Shalt Not Kill, (1924); Los compañeros del silencio/Companions of Silence (Basiliao Zubiaur 1925); and El sendero gris/The Gray Path (Jesús Cárdenas 1927). It was during these shoots that Sequeyro learned the secrets of film direction, and she probably derived her taste for melodrama from the same sources. In 1923, Rafael Bermúdez Zataraín published a note in El Universal entitled “The success of the national film, The Crazy Woman’s Son,” declaring that “this film has earned both the critics’ and the Silent Art lovers’ approval, and has come to boost our moribund industry, thrilling the audience and crowding the first film theatres of Mexico” (n.p.).

In the late 1920s and early 1930s, through her journalistic collaboration with El Demócrata, El Universal Ilustrado, El Universal Taurino, and Revista de Revistas, Perlita had surrounded herself with a group of friends who were very prominent on the national cultural scene—the cartoonist Ernesto “El Chango” García Cabral, with whom she had worked in silent films such as Atavismo and Un drama en la aristocracia; the muralist and vanguard painter Adolfo Best Mugard, future director of La mancha de sangre/Blood Stain; the painter, cartoonist, and set designer Matías Santoyo; and the poet Arqueles Vela, who, along with Manuel Maples Arce, founded the Estridentista (Stridentist) movement. Sequeyro herself dabbled in poetry, though in contrast to the vanguardist predispositions of some of her associates, her personal taste leaned nostalgically toward the romantic style.

Writing in El Universal Ilustrado, Sequeyro also supported Mexican actresses. In 1931, for instance, she published an article about Lupe Vélez in which she praised the actress for succeeding, even without training, to surpass dramatists of an earlier tradition with her “vigor, her sincerity and her force” (n.p.).

With the arrival of Talkies, Sequeyro took up her acting career again, starring in the classic El prisionero trece/Prisoner Number 13 (Fernando de Fuentes 1933) serving as an extra in La sangre manda/Blood Rules (José Bohr 1933), and playing a small part in Mujeres sin alma/Soulless Women (Ramón Peón and Juan Orol 1934). In 1935, encouraged by collectivist ideas and with the support of a group of film technicians and the Banco de Crédito Popular, Sequeyro founded the filmmaking cooperative Éxito (Success), which produced Más allá de la muerte, only to be bankrupted by the film’s failure at the box office. Two years later, with her husband Mario Tenorio, she founded another cooperative, Carola, through which she produced La mujer de nadie, a film that garnered qualified praise from some critics who saw the film as innovative.  Carlos del Paso, in 1937, in Revista de Revistas, wrote that “this film may not be out of this world, but on the other hand some of its achievements are without precedent in local film culture” (n.p.). Another critic, María Celia del Villar, writing in El Universal Gráfico argued that “due to her unflagging effort and artistic enthusiasm, Adela Sequeyro has achieved great success in all aspects of her chosen form of expressions—as a screen writer, as an artistic director, and as a national screen star” (n.p.). 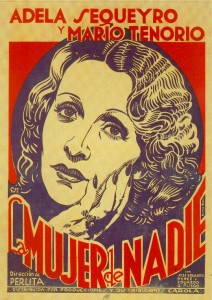 In the eyes of Sequeyro herself, La mujer de nadie was daring for its time because she was taking on a job that was traditionally the job of a man. At the same time, the film also celebrates the female capacity to love. The protagonist, played with great intensity by Sequeyro at the height of her beauty, projects feelings of equal intensity toward the three gallant bohemian-artist types who court her. And although the film ends with Sequeyro’s character choosing to run away rather than remain and force the three artists to confront the possibility that she would refuse to choose between them, its director was able to express a specifically female erotic universe in strikingly modern filmic language, which, in its formal rigor, invites comparison with the work in the 1930s of her contemporary American director Dorothy Arzner.

Despite economic difficulties, Sequeyro managed to direct her third and last feature film, Diablillos de arrabal/Little Slum Devils (1938), which bears no resemblance to its predecessor. Probably inspired by the famous La pandilla/The Gang serial and by the mass-produced, melodramatic print serials of the day, this film narrates the adventures of two rival youthful gangs who end up joining forces to defend their neighborhood from the ravages of a group of adult bandits. Sequeyro later said that she agreed upon this theme as a concession to her husband and that she herself would have preferred to keep costs down by doing another film with fewer sets and a very small cast. Unfortunately, Diablillos de arrabal failed at the box office, and Sequeyro had to forfeit her rights to the film, leaving her virtually destitute.

Compelled to give up her filmmaking career, she returned to journalism, which she practiced through the 1950s, producing interviews, columns on local color and customs, and even bullfight reviews. In the following decades, she was buried in ill-deserved oblivion until filmmaker Marcela Fernández Violante located her and interviewed her for a project on Mexican women film pioneers. Thanks to Fernández Violante, who used various means to bring the too-long-forgotten contributions of women film pioneers like Sequeyro and Matilde Landeta back into the public eye, Sequeyro had the satisfaction of renewed recognition late in life. She lived out her declining years in very modest conditions under the care of her only child, Sandra, and died in Mexico City on December 24, 1992, at the age of ninety-one.

Rashkin, Elissa, ed. Women Filmmakers in Mexico. The Country of Which We Dream. Austin: University of Texas Press, 2001.

1. Adela Sequeyro as Director and Producer