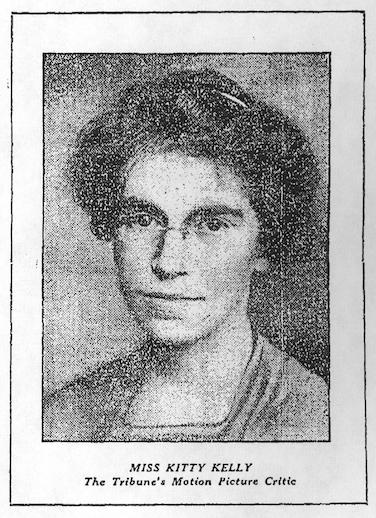 Born and raised in “a small Iowa town” (Chase), Audrie Alspaugh graduated from the University of Iowa with an English degree in 1909 and two years later was hired as a book reviewer at the Chicago Tribune. In July 1914, she began signing a daily film review column, “Today’s Best Photo Play Stories,” with the nom de plume of Kitty Kelly. Soon after, she retitled the column “Flickerings from Filmland.”

Kelly exhibited an exuberant writing style, spinning out tongue-in-cheek metaphors, neologisms, and syntactic tangles, and her evident love of language sometimes verged on showboating. In early March 1915, for example, she invited female readers to share her tongue-in-cheek delight with a press release puffing Francis X. Bushman’s addition of “an amethyst colored automobile to his collection of ‘jewels’” with: “My Goodness Gracious Girls! Isn’t He Lovely!” (“Flickerings from Filmland” [4 March 1915]). Yet her own sense of judgment and taste was always so perceptive that her criticism often served to “train” fans in what to look for while watching movies. In May 1915, she summed up her critical principles in a review of Stolen Goods (1915): what mattered was not only the quality of acting and characterization in the leading roles (here, Blanche Sweet) but also a film’s narrative construction, atmosphere, and editing—attributed in this case to the scenario writer Margaret Turnbull and director George Melford (“Flickerings from Filmland: STOLEN GOODS”). A year later, she defended Lois Weber’s Where Are My Children? (1916), a “problem play” about contraception and abortion that was implicitly about class and gender relations and revealed the unstated assumptions of the eugenics movement (“Flickerings from Filmland: Where Are My Children?”). One of Kelly’s more intriguing columns was an unexpected, intelligent review of Hugo Münsterberg’s 1916 book The Photoplay. She highlighted his defense of motion pictures as a new medium of art that not only could achieve a harmonious form in and of itself but one that also created an immersive psychological parallel to human consciousness (“Flickerings from Filmland: Handing One to the High Brows”).

For more than a year, Kelly closed her Tribune columns with a wittily captioned list—i.e., “Zowie” and “Why Exhibitors Go Insane”—of what the Chicago censors ordered to be cut or banned from the films soon due for release. These lists constitute a rare treasure trove of censorship data. Presumably, they can be accepted as accurate; otherwise, the censors would have forced her to discontinue them.

The Tribune thought so highly of Kelly that it took the unusual opportunity, in late April 1916, to promote her columns with a rare half-page advertisement (Advertisement). However, several months later, in October 1916, Kitty Kelly’s name disappeared from the Chicago Tribune altogether. Her daily “Flickerings from Filmland” column reappeared the following year in the Chicago Examiner. For a year or so, she stuck to reviewing new films, but by mid-1918, after William Randolph Hearst merged the Examiner with the Herald, she also was editing a page titled “The Screen” in the new Sunday edition, which had the largest circulation in the city. One of her Sunday columns appealed directly to movie fans by inviting them to submit short reviews of the film she had chosen for the week; each of the winning reviews would be printed in the weekly “Lay Critics’ Corner,” and the writers paid a dollar (“Be Your Own Critic”).

The Herald and Examiner is not digitized beyond April 1918, so it is difficult to research Kelly’s work beyond that date. Quotes from her reviews in Tribune theater ads, however, reveal that her columns continued at least through April 1919. Although I recently discovered that the University of Illinois Library holds microfilm of the Chicago Herald and Examiner, from May 1918 into the 1930s, the Covid-19 pandemic has kept me from consulting that microfilm. Whether Kelly continued to write regularly for Chicago newspapers, on the movies or other subjects, is unclear.

In October 1915, Alspaugh had married the Tribune’s features page editor, Al Chase, and they announced their wedding in a comic film script dubbed a “reel romance” (McQuade 1286; “It Can Be Done”). Chase later served as the Tribune’s financial and then real estate editor; once he retired, they moved to Willow Brook farm near Glen Ellyn, Illinois. In 1956, either before or shortly after Chase died, perhaps as a tribute to her long love of American wildlife, Alspaugh bequeathed their 43-acre farm to the DuPage county forest preserve, which converted the tract into a wild animal refuge. When she herself died in November 1965, she had been living with friends, Mr. and Mrs. Walter Julius, northwest of San Antonio, Texas. In a brief obituary, the Pittsburgh Press referred to her as “the nation’s first movie critic […] under the pen name of ‘Kitty Kelly’” (“Obituaries”).