Behind the Scenes: A Report on the Recent Women and the Silent Screen IX Conference

Xinyi Zhao recaps her experiences at the recent Women and the Silent Screen IX conference, which was held in Shanghai last month (June 16-18, 2017): 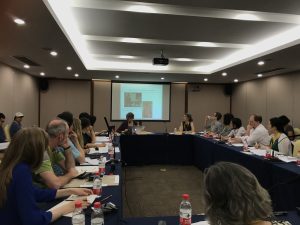 One of the highlights of my summer this year was attending Women and the Silent Screen IX, which was hosted by the Shanghai Theater Academy and Contemporary Cinema. The conference dovetails with the Women Film Pioneers Project insofar as both strive to rewrite world film history through excavating and reevaluating those women who shaped cinema into what it is today. This year’s WSS meeting, entitled “Histories, Her-stories, and Methods,” concerned the methods of historiography centered on women film workers in the silent era. It featured three days of panels, screenings, and keynote speeches. It brought together over sixty participants from more than ten countries. Their papers addressed a wide array of issues revolving around female agency and in/visibility in film historiography, the limit of life-writing (autobiography and biography), and its methodological value for alternative feminist historiographies.

WSS 2017 turned out to be a lively, engaging, and illuminating conference. I was particularly struck by Professor Monica Dall’Asta (Università di Bologna) and Professor Luca Mazzei’s (Università Roma “Tor Vergata”) paper “How About Women in the History of Film Theory?” They aptly pointed out that “until the advent of Laura Mulvey and feminist film theory in the 1970s, film theory was virtually an all-male business.” For that reason, the paper steered away from women’s film production to discursive production, calling for more research on early women’s reflections on and theoretical engagement with cinema.

As the first WSS conference ever held in Asia, there was a special emphasis placed on Asian women film pioneers in the 1920s and 1930s. Professor Chika Kinoshita (Kyoto University), for instance, presented her work on Irie Tanako, the first woman producer in Japanese film history, and examined her first film The Dawn of Manchuria and Mongolia (1932) under the rubric of colonial modernity. This paper was crucial to our understanding of how Irie’s work combined her own feminist agenda with the collective action of the Japanese Empire. 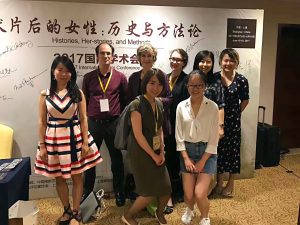 A contingent of Columbia students, faculty, and friends at WSS IX.

The screenings took place in the extraordinary Shanghai Film Museum on the original site of Shanghai Film Studio, one of the three major film studios in China. Accompanied by perfectly fitting live piano performances, the screenings featured exceptionally rare silent films from around the world, including The Spiders’ Cave (dir. Dan Duyu, China, 1927), The Red Heroine (dir. Wen Yimin, China, 1929), The Swordswoman of Huangjiang (dir. Chen Kenran, China, 1930), Mothers of Men (dir. Willis Robards, USA, 1917), and Crossroads of Youth (dir. Ahn Jong Hwa, Korea, 1934). My personal favorite was The Red Heroine, which featured a maiden turned knight-errant who serves as an arbiter of her community (starring recent addition to WFPP Fan Xuepeng). Beautifully restored by the China Film Archive in Beijing, the film is among the very few extant Chinese wuxia films in the silent era and thus opens a unique window to the genre’s early development.