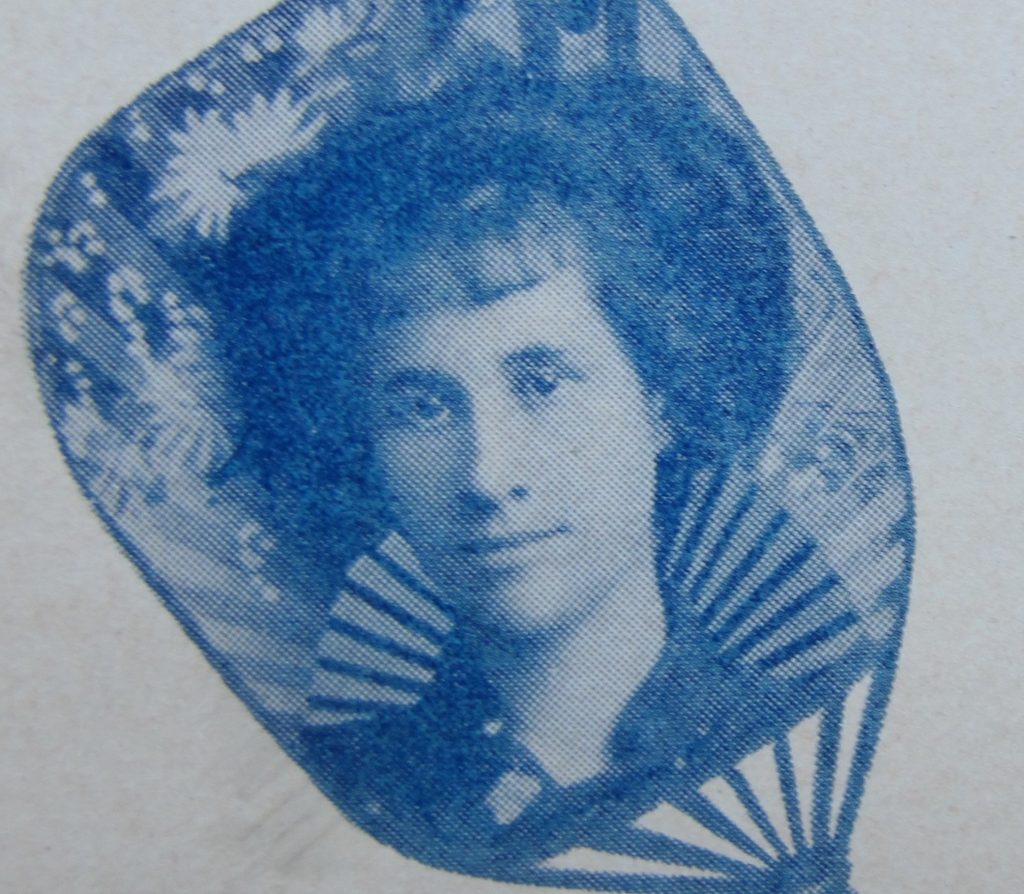 Winnifred Eaton is best known for her success as a novelist under the pseudo-Japanese pen name Onoto Watanna, but she also worked as a screenwriter, title writer, literary advisor, and scenario editor for Universal and Metro-Goldwyn-Mayer between 1921 and 1930, and wrote a number of poignant articles on both the profession of the Hollywood screenwriter and the Asian-American experience. Eaton was born to a British father and a Chinese mother who left England for Hudson, New York, before settling in Montreal, where she was born. She supposedly wrote under a Japanese pseudonym to safeguard herself against fervent anti-Chinese sentiments of the time (Hicks et al. 2000, 201), expressed through legislation such as Chester A. Arthur’s 1882 Chinese Exclusion Act, which was not repealed until 1943. As Onoto Watanna, Eaton played into and strengthened the popular late-nineteenth century Japanese strand of orientalism known as japonisme, which permeated the arts, design, fashion, film, and literature, even though she would never visit Japan. She was progressive for her time, however, in that her romances were often characterized by interracial relationships. Her older sister, Edith Maude Eaton (1865-1914), tackled anti-Chinese sentiments head on, writing both journalism and fiction about the rough Chinese-American experience under the pen name of Sui Sin Far (Chen 2016, 185). 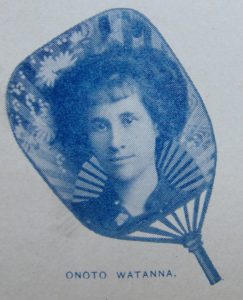 Eaton started writing around 1898, but it was not until she moved to New York City with the manuscript of her second book, A Japanese Nightingale (1901), that her career really took flight. Eaton’s rising fame is evidenced by a 1902 article on the front page of The New York Times, notifying the general public that none other than stage director David Belasco had decided to bring a suit against her (1). Eaton had been shopping around A Japanese Nightingale and sold the dramatic rights to the powerful theatrical production duo of Klaw and Erlanger. She accused Belasco of borrowing a little too generously from her work for his own contribution to japonisme, the 1903 play “The Darling of the Gods: A Drama of Old Japan,” written with the author of the short story Madame Butterfly (1898), John Luther Long.

“A Japanese Nightingale” opened on Broadway at Daly’s Theatre in 1903, but it was another decade before Eaton’s name was linked to motion pictures. In December 1914, the Selig Polyscope Company advertised her name (misspelling it as Onota Watanna) in Motography, in a list of “some of the best known and highest priced writers” that they had optioned (902). A few months later, Motion Picture News reported that Selig was “planning to build a regular Japanese garden for the filming of the Onoto Watanna stories, which have gained a big following” (1915, 34). In The Writers Bulletin and Literary Reporter, Eaton is reported to have taken a tour of the Selig studio in Chicago, and she stated to reporters that “the coming field for the novelist and the short-story writer is the profession of photoplay writing […]. I hope to be able some time to write motion picture plays. That is, not to have my stories adapted by others but to be able to build a working scenario from the very foundations to the last scene. No one realizes that this necessitates study on my part but I am willing to work, for I feel I will be rewarded” (Jordan 1915, 10). Little seems to have come of Eaton’s contacts with Selig, and though her granddaughter states that William Selig became one of her agents (Birchall 2001, 98), she was also represented in the film business by the agency that represented Mary Pickford, C.C. Wilkening, as per their January 1916 ad in Motion Picture News (147).

According to the American Film Institute Catalog, Eaton’s first credit appeared on the 1921 Paul Scardon-directed Universal feature False Kisses,  a love triangle set in a fishing town, which she adapted from Wilbur Daniel Steele’s one-act play “Ropes.” Motion Picture News listed the film as a “rugged drama,” and a film about the “storm and stress of lighthouse life,” but faulted it for its excessive reliance on intertitles to get the story across (1921, 2733). Exhibitors Herald went even further, calling the story “amateurish” and “far from convincing” (1921, 52). The poor reception of the film—and in particular the critical emphasis on the story—might have caused Eaton to shift her focus back to writing novels, as she published three books between 1922 and 1925, before being hired to run Universal’s East Coast scenario department in December 1924.

A January 1925 issue of The Universal Weekly reports a meeting between Eaton and Burl Armstrong, Universal’s West Coast story editor, in which she is described as the new story editor for Universal in New York, noting that “Universal feels very happy over securing such a well-known authoress as Mrs. Reeve to deal with the authors from whom it must secure twelve more books for its 1926 schedule” (8). According to Moving Picture World, Armstrong and Eaton’s meeting led to them buying a “large group of novels, serial stories and plays” for Universal (1925, 878), so it seems that Universal’s Carl Laemmle Sr. hired Eaton not only for her literary talent, but also for her large network of personal contacts; this is evidenced by the fact that in this period, Eaton is also described by Motion Picture News as Universal’s Editor-in-Chief and literary advisor (1925, 2030), and by an Exhibitors Trade Review article that divulges Universal’s strategy quite openly, reporting that Eaton sent out a letter to “every well known author in the United States” urging them to write for pictures–Universal’s pictures, of course (1925, 14). We know that she oversaw the New York scenario branch upon her arrival and she continued to do so after Laemmle Sr. brought her to Universal City in Hollywood as a scenario editor in late 1925, according to a Film Daily article entitled “Scenario Editor Changes Quarter” (2). 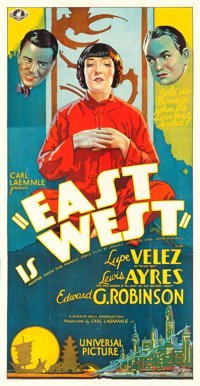 Laemmle Sr. was initially a mentor figure for Eaton. He thought her brilliant and she in turn dedicated her 1925 novel His Royal Nibs to him. As Birchall notes, however, her quick rise to power did not sit well with other high profile Universal executives, especially on the West Coast; they saw their reading department shut down because of Eaton’s arrival and, worse, had to answer even more directly to her when she was redirected to Hollywood by Laemmle Sr. (156). The studio politics and back talk became so unbearable that Eaton quit in December 1926, and, as Variety reported on January 5, 1927, moved  to Metro-Goldwyn-Mayer to write original screenplays and adaptations (58). Her stint at MGM was brief, however, and two years later she returned to Universal as a screenwriter. She was credited for work on five sound films between 1929 and 1930, though four of them were also produced in a silent version; two of these, Shanghai Lady (1929), directed by John S. Robertson, and East is West (1930), directed by Monta Bell, dealt explicitly with Chinese (-American) tropes.

Eaton’s screenwriting experience does not seem to have been ideal, and she confirmed this in a scathing Motion Picture Magazine article in 1928. In “Butchering Brains: An Author in Hollywood is as a Lamb in an Abattoir,” Eaton colorfully described the Hollywood experience that renowned authors receive, not only from her perspective as a renowned author, but also as someone who was hired by Universal with the express purpose of attracting renowned authors to the picture industry. While first they are wined and dined and praised into the heavens, most authors’ contract is dropped after three months, Eaton states, for it is not “creative brains, talent or inventive genius” that Hollywood is seeking but “sharp wits, craft, salesmanship, pull, politics and the thousand and one petty tricks that contribute to one’s influence in this game” (28). Eaton noted that being assigned to adapt original stories from “Susy Swipes” or “Davy Jones” of Hollywood is a wrath-inducing and mind-numbing nightmare, since they are written in a language that is “almost beyond credence” and are populated by “incidents and characters and gags and plots of a hundred or more stories that are horribly reminiscent”; there is no point in complaining to your studio bosses either, Eaton writes, for a lot of them are “bright young fellows” who would “mistake Maeterlinck for a patent medicine and have been known to a reject a story by Victor Hugo because he ‘keeps a restaurant downtown’” (29). 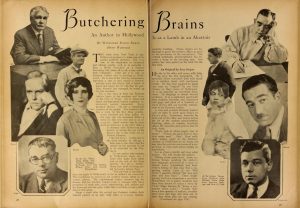 As if this article did not yet enough foreshadow Eaton’s exit from the motion picture industry, she took to the pages of Motion Picture Magazine again in early 1929 to interview Japanese star actor Sessue Hayakawa on his overnight departure from the screen in 1924. Hayakawa explained that he “did not like the stories [he] was required to play in” (33), but when pressed by Eaton he revealed the true reason that compelled him was a racist expletive uttered by men who owed him money: “only an ignorant coward throws up to a man that he does not like his race. I come of a proud people–a man of my quality could not endure such insult” (90); the next day Hayakawa packed his bags and returned to Japan. Almost five years later, Eaton was there to follow up on an issue that must have been close to her heart. Hayakawa experienced a “friendlier feeling” upon his return, and a “marked desire for Oriental pictures” that he appreciated, but he acknowledged that it might just be his feelings that had mellowed over time (91).

Eaton returned to work for Universal reluctantly, given her demoted position. Her work there might have been fueled in part by necessity, as she lost all of her savings in the 1929 Wall Street Stock Market Crash. Having become somewhat estranged from her husband–who she feared was having an affair–and coming to terms with the fact that her heyday as a screenwriter was over, she returned to Calgary intent on focusing on her family (Birchall 191).

See also: “The Absence of Canadian Women in the Silent Picture Industry”

“Authors Urged to Write Photoplays: Universal Sends Request to Every Famous Author in the Country to Write for Screen.” Exhibitors Trade Review vol. 17, no. 15 (7 March 1925): 14.

Chen, Minjie. The Sino-Japanese War and Youth Literature: Friends and Foes on the Battlefield. London and New York: Routledge, 2016.