Little is known about Virginia Dale before she began reviewing films for the Chicago Journal. One further complication is that no copies of the Journal seem to survive before 1921, although she did begin writing a column at least two years earlier. In October 1919, the Fort Wayne Sunday News, for instance, reprinted her review of Broken Blossoms (1919) in full (“New Picture Adds to Fame”). By 1921, the Journal considered Dale important enough for its readers to post a series of small advertisements repeatedly promoting her film reviews.

As other women columnists had before her, in late 1921 Dale toured a film studio, visiting the Fox Film Corporation in Fort Lee, New Jersey. What particularly struck her was not only the music performed for the actors to “work in rhythm” in a scene but also all the people walking around in costumes from every age of history, in a kind of “Alice’s Wonderland” (“Fox Studios Hive”). She was one of the few newspaper columnists to make note of the yellow make-up on actors’ faces, which, when recorded on orthochromatic film stock, ensured audiences that their characters were perceived as “properly” white.

Although Dale praised films such as Robin Hood (1922) unequivocally (“Time Can Not Tarnish This Film”), she quibbled about others like Flaming Youth (1923), warning Colleen Moore to avoid becoming “too cute” (“News of the Motion Picture World” [30 October 1923]). Dale’s frustration with Cecil B. DeMille’s upper-class melodramas, however, was more than a quibble: in the case of Saturday Night (1922), she found the director once again dazzled by money, concocting the opulent display of yet another infamous bathroom scene (“At the Theaters”). But Dale also devoted columns to less expected subjects: from the career of June Mathis, a model scenario writer (“News of the Motion Picture World” [25 October 1923]), to the Rothacker Film company, Chicago’s major manufacturer of advertising films and the laboratory responsible for developing the negatives and making positive prints of feature films from First National and other producers (“Moving Pictures: Chicago Movie Makers”). In a clever strategy to fulfill her readers’ demand for gossip, Dale also created the foil of a “Chatty Caller,” who, as if sitting beside her, kept serving up tasty tidbits in column after column (“Moving Pictures: Chatty Caller”). 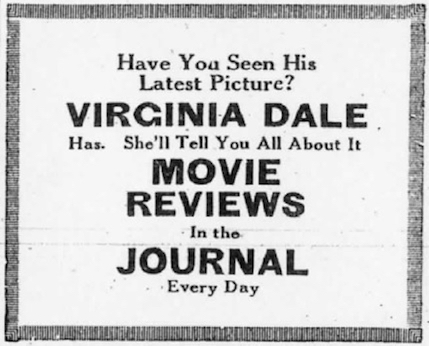 Through the 1920s, Dale served as both the motion picture and drama editor for the Chicago Journal. Theater advertisements often used quotes from her reviews to promote individual films, and not only in Chicago. By the late 1920s, she was known as a magazine writer of short stories and as the author of an entry summarizing the Chicago season for Burns Mantle’s annual theater volume (Donaghey). Whatever career she had after the Journal ceased publication in 1930 is unclear.