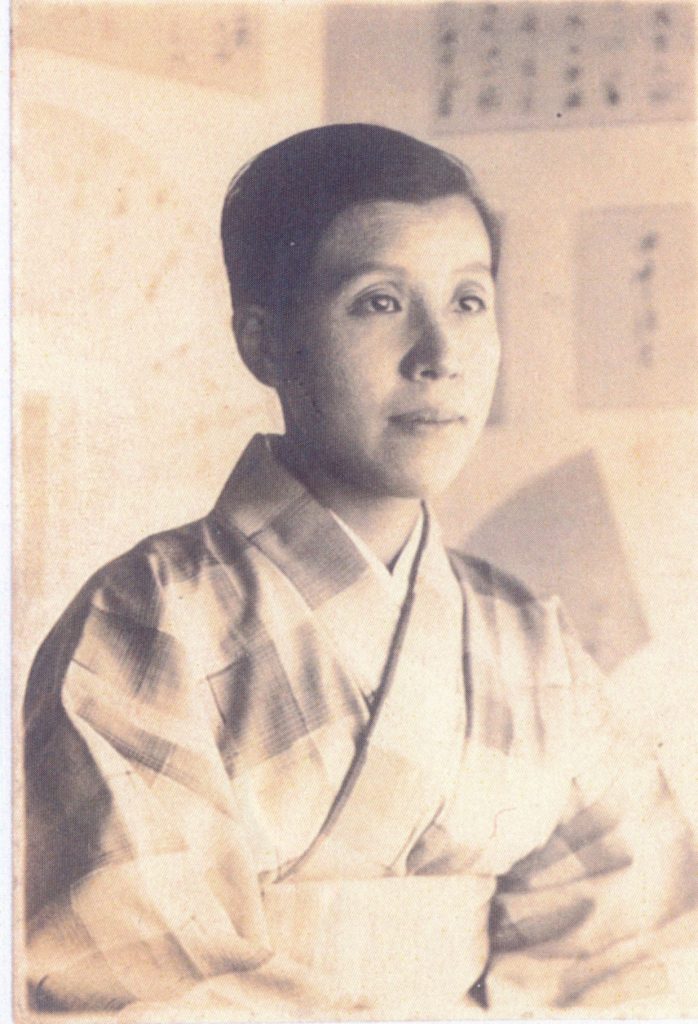 Tazuko Sakane was the first female director in Japan. By 1936, Sakane had taken a variety of positions at virtually all stages of film production, ranging from director and editor to script supervisor and assistant director. She remained the only female director in Japan until 1953, when the actress-turned-director Tanaka Kinuyo made her first film. Not only is Sakane’s life illustrative of the constricting roles enforced by Japanese society almost vengefully upon women, but her involvement at Manchuria Film Association further poses questions pivotal in theorizing the mutual implications of feminism, imperialism, and colonialism. That being said, Sakane has long been marginalized, if not erased, from the history of Japanese cinema.

Tazuko Sakane portrait. Courtesy of the Museum of Kyoto.

At the historical juncture when cinema started to entwine with nationalism in Japan in the early 1900s, Sakane was born in Kyoto, a city dubbed “Japan’s Hollywood.” Sakane’s father was a wealthy inventor and businessman with connections to the film industry. As a young child, Sakane developed her cinephilia through frequenting cinemas with her family. She went to Doshisha Women’s College to pursue a degree in English literature at a time when only one percent of Japanese women received higher education, yet her stepmother forced her to quit college in her second year (Ikegawa 2011, 7). At the age of twenty, Sakane’s parents arranged for her to marry a gynecologist. Four years later, her marriage ended with her divorcing her husband, who had been found disloyal (McDonald 2007, 129).

After her marriage broke up, Sakane decided to obtain a job instead of getting remarried, an unusual decision for an upper-class woman in those days. In 1929, Sakane’s father helped her join Nikkatsu Studio as Kenji Mizoguchi’s assistant. At the time, Japanese cinema had just entered a prolonged silent-to-sound transition (1929-1935), during which both silent and sound films were produced and exhibited (Kinoshita 2011, 4). Sakane’s first work was taking notes when the crew brainstormed the story for Mistress of a Foreigner (1930), a film with partial sound, also known as a “part-talkie.” She was also responsible for helping actors memorize lines, so that their lip movement would correspond to the content of the spoken dialogue. Whereas she remained unpaid for the first six months, Mizoguchi was quick to appreciate her potential, and kept her working as his assistant for Fujiwara Yoshie’s Hometown (1930), And Yet They Go On (1931), and The Man of the Moment (1932). On set, Sakane’s work entailed such tasks as climbing ladders and crouching behind set pieces, responsibilities that were highly inconvenient to perform in a kimono. As a result, she cut her hair short and started wearing tailored pants and suits, which not only allowed her mobility, but also helped her blend into the male-dominated working environment.

In 1932, Mizoguchi moved to Tokyo and joined Shinko Kinema, and Sakane followed; in those days, when the director transferred to another studio, it was very common for him to take his disciple along. She notably edited Mizoguchi’s The Water Magician (1933), which was also Sakane’s first film as an editor. Having assisted Mizoguchi on more than ten films as assistant director, screenwriter, and editor, Sakane started to plan her own directorial debut based on Jean Webster’s 1915 novel Daddy-Long-Legs and applied for a promotion to director. Virtually over night, rumors spread throughout the studio si her co-workers suspected that Sakane was having an affair with Mizoguchi in order to get the promotion (Ōnishi 1993, 49). For whatever reason, Sakane’s petition for promotion was eventually rejected by the studio executives.

In 1936, Mizokuchi and Sakane transferred to Daiichi Eiga in Kyoto, where Sakane was eventually given an opportunity to direct, albeit without the freedom to choose the subject matter. The first film project that the studio assigned to her was New Year’s Finery (1936), a period drama adapted from a shinpa (early modern drama) that reflected upon the social obstacles of free love through the unlikely and finally soured romance between a geisha-to-be and a Buddhist candidate. For the sake of commercial promotion for the first film by Japan’s first female director, the studio published an article that focused on Sakane’s private life. Written in a mocking tone, it mentioned her divorce and even questioned if she was still a virgin (Ōnishi 62). The reception of the film was far from universal appeal. Japanese critics at the time–predominantly male–denounced her work as “simply imitating the deficiencies of Mizoguchi films” and short of what they called “female sensibilities” (Ikegawa 2011, 25). Sakane herself recalled her first film with regret in her seventies: “I really wished to make a film about female students…I was unlucky because it was far from the film that I truly wanted” (qtd. in Ikegawa 2011, 25). The negative reviews also tarnished Sakane’s reputation as a new director. Unable to get another project from the studio, she was demoted back to Mizoguchi’s assistant director and editor. Unsuccessful debut notwithstanding, the later two Mizoguchi films in which Sakane was involved as editor, namely Osaka Elegy (1936) and Sisters of the Gion (1936), both won the Kinema Junpo Best Ten Films of the Year. Upon Daiichi Eiga’s collapse in 1937, Sakane moved to Shinko Kinema with Mizoguchi, where she edited The Straits of Love and Hate (1937).

Tazuko Sakane (r) with unidentified woman. Courtesy of the Museum of Kyoto.

In July 1937, the Second Sino-Japanese War broke out, leading to a tightened censorship enforced by the state. Three years later, Sakane left Mizoguchi and joined Tokyo Riken Film Company, where she was assigned to make a documentary on the Ainu of northern Japan, an indigenous ethnic minority group. She spent eight months in Hokkaido documenting Ainu customs, daily habits, festival celebrations, and Ainu women in particular (Ikegawa and Ward 2005, 261). However, her film Fellow Citizens in North (1941) was initially denied release, as the studio had envisioned a film that promulgated the “one nation, one people” ideology that asserted Japan as ethnically homogeneous, not one that mourned the loss of native cultures (Ikegawa 2011, 35-6). Sakane had to return to Hokkaido for another month of shooting and adding footage, including of a young Ainu soldier in order to attune her film for war propaganda. The reediting, however, resulted in narrative inconsistencies that put her work under scathing criticism later on.

Tazuko Sakane with unidentified woman. Courtesy of the Museum of Kyoto.

In February 1942, aware of the multifarious constraints that confronted her as a woman filmmaker in wartime Japan, Sakane decided to relocate to the Manchuria Film Association (Man’ei), a “national policy company” in the Japanese “puppet state” Manchukuo (today’s Northeastern China). Sakane joined the education section, which was responsible for producing documentaries, cultural films, and educational shorts to educate and enlighten the Manchukuo populace (Hori 2005, 90). Contrary to Man’ei features that targeted both male and female audiences, their educational films barely addressed female audiences until Sakane’s arrival. “Although I joined Man’ei as a female editor in the beginning, given the necessity to make films for women in the [Great East Asia] Co-Prosperity Sphere, and that only women can make films for themselves, I was promoted again to director,” said Sakane in a 1942 interview. “At this point my work mainly targets Chinese women, but in the future I would love to expand my audience to Japanese women in Manchuria, and introduce their life to other ethnic groups in the [Great East Asia] Co-Prosperity Sphere” (qtd. in Ikegawa 2011, 53).

During her four years at Man’ei, Sakane made fourteen films for both Japanese and Chinese viewers, including Children’s Manchuria (1942), Working Women (1942), and Healthy Little Citizens (1942). Amongst these titles, only the documentary film Brides of the Frontier (1943) is known to be extant. The film sought to encourage young Japanese women to settle down in Manchuria as farmers’ wives, against the background of a severe labor shortage in Manchuria. Featuring Japanese men and women performing household activities side by side in the idyllic countryside, the film carved out a utopia seemingly intact from war mobilization and a land of gender equality that was unimaginable in Japan. Apart from Brides of the Frontier, Sakane made thirteen educational shorts that provided essential knowledge of everyday living particularly for women, such as vegetable preservation, indoor gardening, and heater usage. Sakane herself appeared in her educational film Gardening in Spring (1944).

An excerpt from Tazuko Sakane’s handwritten CV. Courtesy of the Museum of Kyoto.

In August 1945, Japan’s defeat in the Asian Pacific War coincided with Man’ei’s collapse, simultaneously terminating Sakane’s two on-going film projects. The Soviet Red Army quickly took control of Man’ei, followed by the Chinese Communist Party (CCP), turning the site into Northeast Film Studio, also known as “the cradle of new China’s cinema” (Zhang 2012, 165). Alongside other Japanese staff who opted to stay in China, Sakane joined the newly founded Chinese studio. She trained Chinese film workers, most of whom had no filmmaking experience, and cooperated with them in making propaganda films for CCP’s newborn regime. In September 1945, Sakane was invited by the Red Army to make a documentary on Sino-Soviet friendship, yet no record of its availability has been found. “I don’t have any political leaning, nor am I affiliated to any party,” Sakane wrote in her diary in 1945. “I am only a film worker” (qtd. in Ōnishi 172).

Sakane went back to her homeland in October 1946, which ironically marked the very end of her directorial career on the grounds that she had to have a college degree to be a director in post-war Japan. Sakane was forced, at age forty-two, to return to Mizoguchi as his assistant–the only position available to her–and help him on a number of critically acclaimed films, including The Love of Actress Sumako (1947), Women of the Night (1948), and My Love Has Burned (1949), to name but a few. In 1962, Shochiku cut down the retirement age from sixty to fifty-five, and the fifty-seven-year old Sakane retired from the studio, ending a career that spanned thirty-three years. After retirement, she continued to work as a freelance scriptwriter for the Daiei Company until her death from gastric cancer in 1971 at the age of seventy.

For all the discussions on Sakane, one striking aspect of her persona has largely been ignored. A decent number of photographs depict a woman who favored a look and style that connote lesbian identity. Moreover, she was quite open about her interest in lesbian subculture worldwide, even acknowledging Dorothy Arzner and Leontine Sagan’s radical German lesbian film Mädchen in Uniform (1931) as major inspirations, according to Ikegawa Reiko’s 2012 presentation at the Makino Symposium at Columbia University. As I have argued elsewhere, assuming a masculine persona to resist and readdress the sexist and constricting roles enforced by Japanese society, Sakane embodied a queerness so threatening to male superiority. The unsettling erasure of Sakane seems to reflect on what might be retrospectively regarded as a “homophobia” inscribed in our history writing that unwittingly partakes in the patriarchal negation of her embodied queerness (Zhao 2017, 10-11). Did an (unspoken) lesbianism inform her cinematic representations of women, a group so central to her oeuvre? Did her female and feminist perspective possibly exert an influence on Mizoguchi, who was often labeled a “feminist” or “woman’s director” (Morimoto 1994, 15)? To be sure, Sakane did not leave behind any personal belongings that substantiate her lesbian identity. Still, to address these issues revolving around her sexuality may in some way open up new horizons in alternative feminist historiographies.