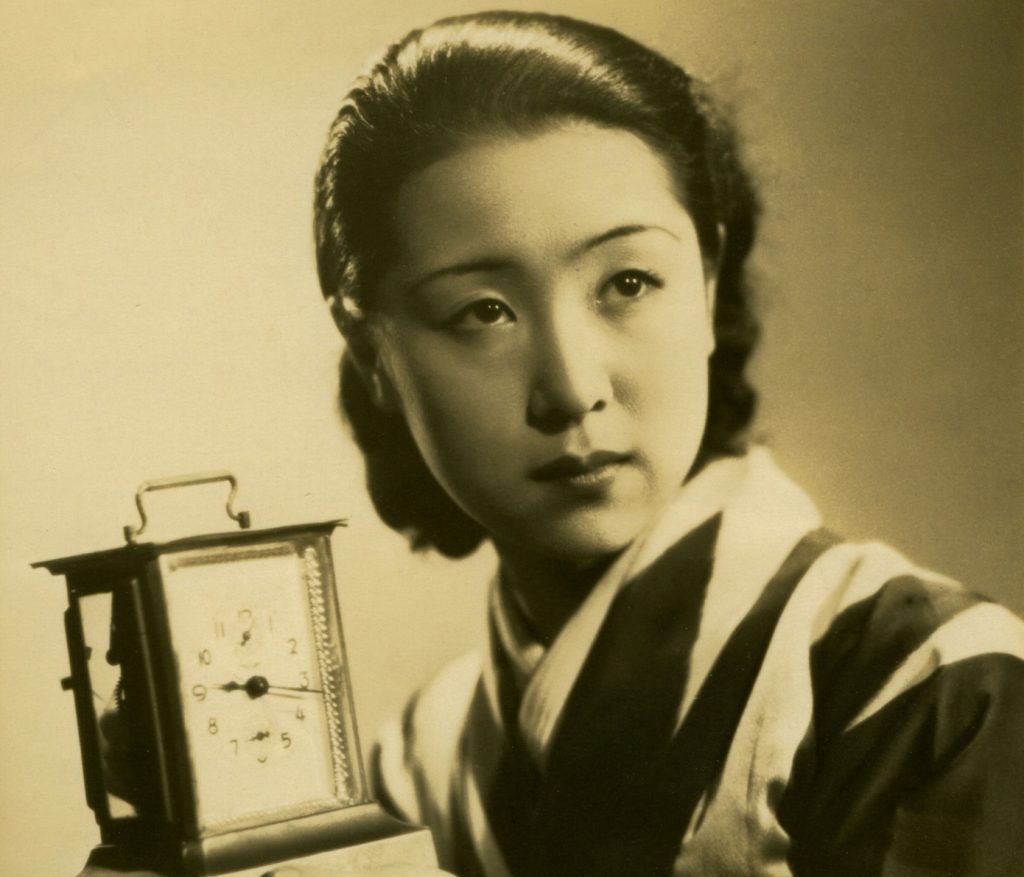 Kinuyo Tanaka was, and still is, one of the most celebrated stars in the history of Japanese cinema. She dedicated her whole life to cinema, acting in over 250 films and collaborating with the most important directors. In the post-war period, Tanaka herself became a film director, the second woman in Japan after wartime filmmaker Tazuko Sakane. Between 1953 and 1962, Tanaka directed six feature films working within the mainstream cinema produced by the Japanese studio system. She was the only female director active during the post-war Golden Age of Japanese cinema in the late 1950s. Her outstanding career in front of and behind the camera not only accompanies the history and technical transformations of cinema in Japan, from the silent era until the late 1970s. It also embodies the socio-political and cultural changes of Japanese society and its female members, offering a unique opportunity to examine the intersections between women’s authorship, representation, and gender discourses in modern Japan.

Born in Shimonoseki, in the southwest of Japan, Tanaka entered the film world in 1924. She was 14 years old and was hired as an actress by Shōchiku studios, one of the major film companies in pre-war Japan, which specialized in modern genre films [gendai geki], and particularly in woman’s films [josei eiga]. In the 1930s, she became one of the most representative stars of the studio, participating in the first successful Japanese talkie, The Neighbor’s Wife and Mine (1931), and gaining audience favor through her roles in romantic melodramas such as The Dancing Girl of Izu (1933), Okoto to Sasuke (1935), and The Love-Troth Tree (1938-39). Her popularity and success were such that Tanaka’s name was even used in film titles to attract the public, for example, in The Story of Kinuyo (1930), Kinuyo the Lady Doctor (1937), and Kinuyo’s First Love (1940). 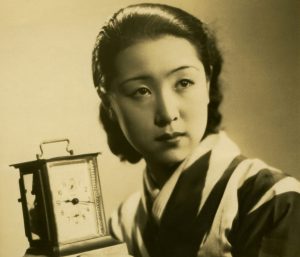 Kinuyo Tanaka in Jinsei no onimotsu (1935). Courtesy of Wikimedia Commons.

Tanaka worked exclusively for Shōchiku until 1950 when she became a freelance actress. Her years at Shōchiku overlapped with times of profound transformation in Japan, particularly for women. Tanaka’s characters and star persona bore the traces of those changes, often becoming a site for their production, circulation, and negotiation. For instance, in films such as A Burden of Life (1935), Tanaka played the role of the “modern girl” [moga], a female figure that embodied the national and gender anxieties of Japanese modernity (Wada-Marciano 2008, 76-110). Similarly, during the wartime years (1931-1945), Tanaka participated in propaganda productions such as Pray at Dawn (1940) and Army (1944). In these films, she represented, but sometimes also challenged, the female ideal of “good wife, wise mother” [ryōsai kenbo], which was encouraged by the militarist ideology driving the Japanese nation at the time (Lee 2011). In the aftermath of the Japanese war defeat in 1945, Tanaka also adapted her career to the new post-war order. Following the film policy of the Allied Occupation forces, many films promoted democratic ideas and political reforms, as well as notions of gender equality and women’s rights (all according to American standards at the time). Tanaka contributed to this trend by acting in the so-called “women’s liberation trilogy” directed by Kenji Mizoguchi, which included Victory of Women (1946), The Love of Sumako the Actress (1948), and My Love Has Been Burning (1949). Moreover, after the war, Tanaka also engaged, on and off screen, with the national traumas and gender contradictions that emerged in this turbulent period of Japanese history. Departing from her image as a national sweetheart, she impersonated the problematic post-war figure of the streetwalker prostitute [pan pan] in Women of Night (1947) and was involved in a media scandal after her tour of the United States as cultural ambassador led to her being accused of Americanization.

In addition to the changing socio-historical context, Tanaka’s post-war career was also determined by her collaboration with Mizoguchi. Their work together lasted 15 years (1940-1954) and accounted for 14 films (12 of which are extant), becoming one of the most successful and critically acclaimed actress-director teams in post-war Japanese cinema. Tanaka’s challenging roles in Mizoguchi’s films shaped her acting profile as a mature and skillful actress, and films such as The Life of Oharu (1952), Ugetsu (1953), and Sansho the Bailiff (1954) brought them international recognition, making Mizoguchi one of the most renowned Japanese auteurs. The rumors of a love affair between the two extended the professional partnership to their private life, reinforcing the myth of the “male director-female muse”–although Tanaka always denied any romantic involvement (Shindō 1975, 418-419). 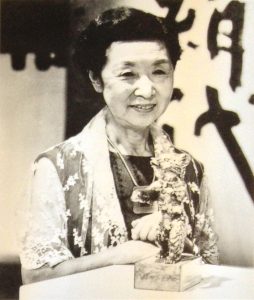 However, despite the undeniable relevance of their collaboration, the long career of Tanaka in front of the camera went far beyond her work with Mizoguchi. She collaborated with world-famous directors such as Yasujirō Ozu (10 films spanning from 1929 to 1958) and Mikio Naruse (for example, Mother [1952] and Flowing [1956]). In Japan, her name was also associated with filmmakers such as Heinosuke Gosho, Keisuke Kinoshita, and Hiroshi Shimizu, who was her partner for a brief time at the beginning of her career and directed her in films such as Ornamental Hairpin (1941). Another example of Tanaka’s meaningful collaborations was her work with Japanese director Kei Kumai in his film Sandakan No. 8 (1974), for which Tanaka received a last recognition by winning the Silver Bear for Best Actress at the Berlin International Film Festival in 1975, only two years before her death as a result of a brain tumor in 1977.

Side by side with her acting work, Tanaka also developed a less known but significant career behind the camera. Her decision to become a film director in the early 1950s was likely motivated by personal ambitions and desires as she was passionate about cinema and dedicated her whole life to it. Tanaka often said that she chose to marry cinema, a catchphrase that expressed her passion, but that also reflected the social expectations upon Japanese women at the time (Tanaka 1997, 293). In fact, Japanese actresses of the period typically retired young, when they got married, but Tanaka never married nor had children. Instead, she chose to continue her work and became a mature actress and director. In 1953, the year in which Tanaka made her debut as a director with Love Letter, she was 43 years old and faced the same unfair destiny of many middle-aged actresses, with ever fewer opportunities for playing interesting parts, let alone protagonist roles. 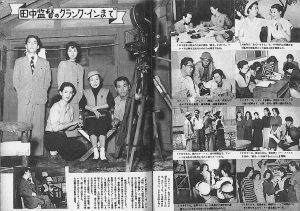 Photo of Kinuyo Tanaka on set of Love Letter (1953) in the film magazine Eiga Fan, January 1954. Courtesy of the Kawakita Memorial Film Institute

The move to the director’s chair seemed a natural choice for her, but it was also inspired and made possible by the political and ideological transformations mentioned before, which occurred in Japan after the country’s defeat in the Asia-Pacific War. Changes such as the right to vote and the legal equality of the sexes included in the new post-war Constitution particularly affected women and their social position in Japanese society. “After the war also in Japan, women’s advancement became evident in every aspect of society, including the entrance of women in parliament. […],” Tanaka explained. “I too felt like trying to do something new by working as a female director” (1997, 372).

Tanaka’s star status and her contacts in the Japanese film industry also played in her favor and enabled her to direct films with different studios and to collaborate with a wide range of stars and technical and artistic staff. Her ties with the great directors of the period also proved important (even if her great collaborator, Mizoguchi, was vocally resistant to her move to directing): Naruse employed Tanaka as his assistant for two months during the shooting of Older Brother, Younger Sister (1953) and Kinoshita and Ozu wrote the scripts for her first two films, Love Letter and The Moon Has Risen (1955), respectively. 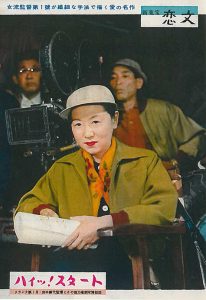 Photo of Kinuyo Tanaka on the set of Love Letter (1953) in the film magazine Eiga Fan, January 1954. Courtesy of the Kawakita Memorial Film Institute.

The six films Tanaka directed, while moving broadly within the genre conventions of the romantic melodrama to which she was mostly associated as an actress, disrupted the dominant representations of women in Japanese cinema of the time. She tackled unexplored topics such as breast cancer and women’s colonial experiences and questioned social issues such as female prostitution and women’s sexuality from an incisive perspective. In one way or another, the six films directed by Tanaka highlight women’s experiences and subjectivity, but do so working within the boundaries of mainstream cinema.

For instance, post-war gender politics about female prostitutes are problematized in two of her works. In Love Letter, the national (male) trauma of the war defeat is represented through the love story of an ex-Japanese soldier who discovers that his beloved girlfriend had a sexual relationship with an American official after the war. In her fifth film, Girls of Dark (1961), Tanaka also explored this issue from another angle, depicting the difficulties of a former prostitute to change her life after the enforcement of the Anti-Prostitution Law in 1956. Unlike many post-war films, these films do not offer a sexualized representation of the female body for male consumption. Instead, Tanaka represented more daring portrayals of women’s sexuality, constructing unusual female characters. For example, in her most celebrated film, The Eternal Breasts (1955), she described the tragic fight of a female poet against breast cancer, not in terms of a passive self-sacrificing victim, but as the emergence of an audacious female subject able to express and reclaim her sexual desires and subjectivity. 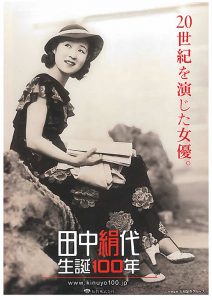 The central place of female characters and women’s issues in Tanaka’s filmography was in part reflective of the wider Japanese cinema of the time, but it also reveals Tanaka’s agency and authorial strategy as a woman filmmaker negotiating her circumstances in 1950s Japan. Being a star and the only female director at the time, Tanaka developed her career behind the camera from a gendered position that determined her choices and the reception of her films. However, instead of resisting her categorization, she turned this to her advantage, constructing spaces of female authorship and subjectivity within the male-dominated cinema industry and its images of women. Starting with The Eternal Breasts, Tanaka chose to collaborate with other women filmmakers and writers. She formed a team with female scriptwriters such as Sumie Tanaka for The Eternal Breasts and Girls of Dark and Natto Wada for The Wandering Princess (1960). These films adapted biographical stories or fictional novels written by female authors and focus on the multifaceted experiences and points of view of female protagonists, who in turn were played by charismatic stars like Yumeji Tsukioka or Machiko Kyō. Tanaka’s last film, and the only period drama [jidai-geki] of her career, Love Under the Crucifix (1962), was produced by Ninjin kurabu, a film company founded by three actresses, Yoshiko Kuga, Keiko Kishi, and Ineko Arima (who also starred in the film). The idea behind the project also came from a woman, the executive producer Hisako Nagashima, who discussed the production with Tanaka for a few years. 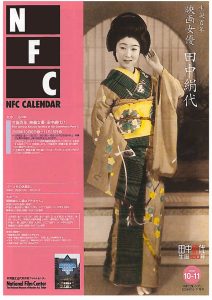 Cover of film program for retrospective dedicated to Kinuyo Tanaka on the occasion of her centennial in 2009. Private Collection.

Despite her fame and prestige as an actress–or perhaps precisely because of it–Tanaka’s pioneering career as a film director is still widely unknown, and the films she made as a director mostly lack any kind of availability. However, working with women filmmakers to articulate women’s experiences onscreen, she became an important node of female authorship and expression in post-war Japanese cinema. Luckily, in recent years, the work of scholars and programmers in the fields of Japanese film studies and women’s film history is bringing Tanaka’s career and films into focus (e.g., González-López and Smith 2018). These efforts directly question the formation of the cinematic canon and its mechanism of exclusion, and help us to recognize the relevance of Tanaka’s filmography in the history of Japanese cinema and beyond.

1. Kinuyo Tanaka as Director and Actress

A complete list of Tanaka’s credits as an actress is available on the website of the Tanaka Kinuyo Cultural Museum (in Japanese).