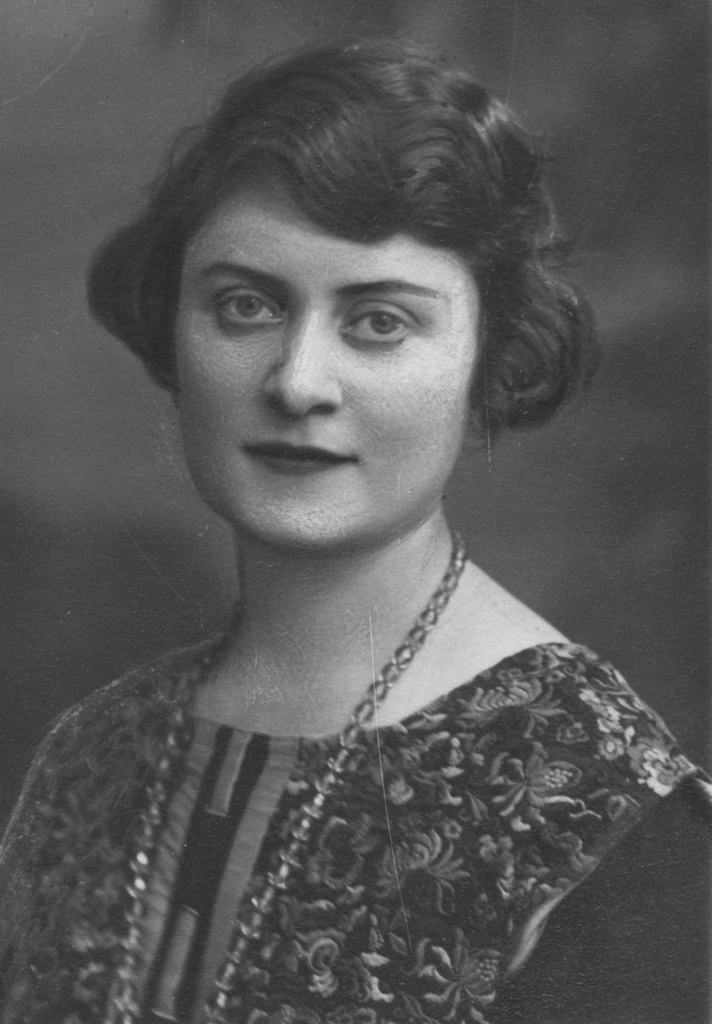 Stefania Zahorska was one of the most respected Polish film critics of the interwar period. Her pioneering approach toward moving pictures, which she considered to be a new artistic form, arose from her background as an art scholar. Fascinated by Impressionism and painting that moved away from literal representation toward abstraction, she saw a similar potential in avant-garde filmmaking. For Zahorska, an ideal film formula would arise from a “mixture of poetics, montage and documentary” (Rees 12).

Zahorska was born Stefania Ernestyna Leser in Cracow to a middle-class family of assimilated Polish Jews. At the time, the city was part of Austro-Hungary. After the death of her mother, presumably when she was still a teenager (no death records survive), Zahorska relocated to Budapest where she lived with her older sister Helena. Her years in the capital of the Austro-Hungarian Empire proved to be formative; Zahorska mastered the Hungarian language—later in life, she also became fluent in English, German, and French—and, after seeing the works of Cezanne, Gauguin, and Van Gogh, discovered her passion for painting. After spending two or three years as a medical student, she enrolled in the department of Art History at Jagiellonian University, back in her hometown of Cracow. Zahorska’s dissertation, which examined the aesthetics of the early Enlightenment in Poland, was defended sometime between 1917 and 1919, just over twenty years after the University opened its gates to female students. A doctorate was, as Anna Clarke notes, still “a rather unusual distinction for women” at that time (419). Looking back, Zahorska explained that her decision to study art was influenced by the urban landscape of Cracow, especially the awe-inspiring beauty of Wawel Royal Castle, and the city’s old townhouses (Zahorska, “Przełomy mego pokolenia”).

Sometime after completing her PhD, Zahorska moved to Warsaw, the capital of the newly-independent Republic of Poland, where her career as a writer and a columnist flourished. In 1924 and 1925, Zahorska worked as the editor of the art section of Przegląd Warszawski [Warsaw’s Review]. In the following year, as she started writing for Wiadomości Literackie [Literary News], Zahorska began to extend her critical focus to the possibilities and limitations of the cinematic medium. Even though the magazine had a rather limited circulation, hardly exceeding 15,000 copies per week, its cultural impact was significant (Zawiszewska 131). Wiadomości Literackie published works by leading writers and intellectuals of the era. While the levels of illiteracy were relatively high at the time—with almost 38% of Polish women unable to read or write in 1921 (Paczkowski 17)—the magazine’s readership consisted almost entirely of Warsaw cultural elite, and the reviews pertaining to film, theater, and art exhibitions rarely included events held beyond the Polish capital. 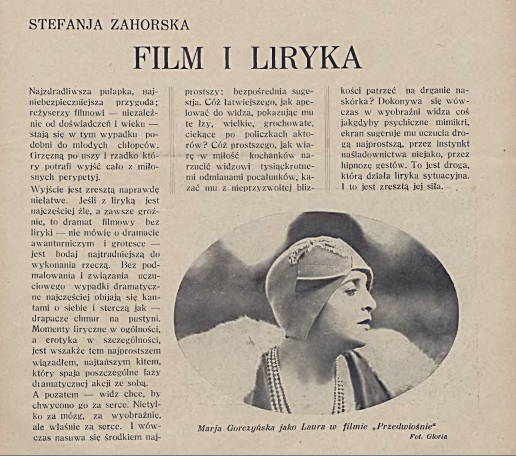 One of Stefania Zahorska’s articles, titled “Film and Poetry” (1928), in Kino–Teatr.

This high-brow status enjoyed by Wiadomości Literackie points to the sophisticated nature of Zahorska’s writings, which did not focus simply on plot synopses, but often interrogated the issues inherent to art theory and the capacities of the cinematic medium. She was a proponent of photogénie, a film theory developed in France by Man Ray, Henri Chomette, and, most importantly, Jean Epstein, himself a Polish émigre. A complex concept, photogénie related to the very essence of film art, which could not simply be captured by the analysis of the visual layer of the film. Mary Ann Doane affirms that “photogénie is designed to account for that which is inarticulable, that which exceeds language and hence points to the very essence of cinematic specificity” (89).

The titles of Zahorska’s articles, which furnished the pages of various magazines, are in themselves a good indication of her intellectual ambition. Headlines such as “Experimental Film,” “Film and Poetry,” “Film of Abstraction,” “Formal Issues of Film,” and “Narrative or Abstraction?” reveal the ideas about cinema’s specific nature that inspired her the most. The ideal cinema that emerged from Zahorska’s essays disposed of narrative structures in favor of experimentation with movement, tempo, and rhythm; she considered moving pictures to have more in common with music than the visual arts, due to the fact that film could engage with varying speeds and temporal durations:

After all, film is a thing similar to a musical composition. […] What is unfortunate is that directors, most often then not, do not have a feel for the musical composition of the whole. They are not aware of the compositional importance of the of lyrical moments; they cannot measure the doses; they cannot contrast. Fascinated by the situations they put their characters in, and seduced by the charms of their primadonnas, they keep on grueling in the bland expansiveness. They are stuck in the sticky, slimy smudge of sentiments. IF Greta Grabo can perversely pout her lips, then they ask her to do it fifteen times per hour. (Zahorska, “Film i liryka”) 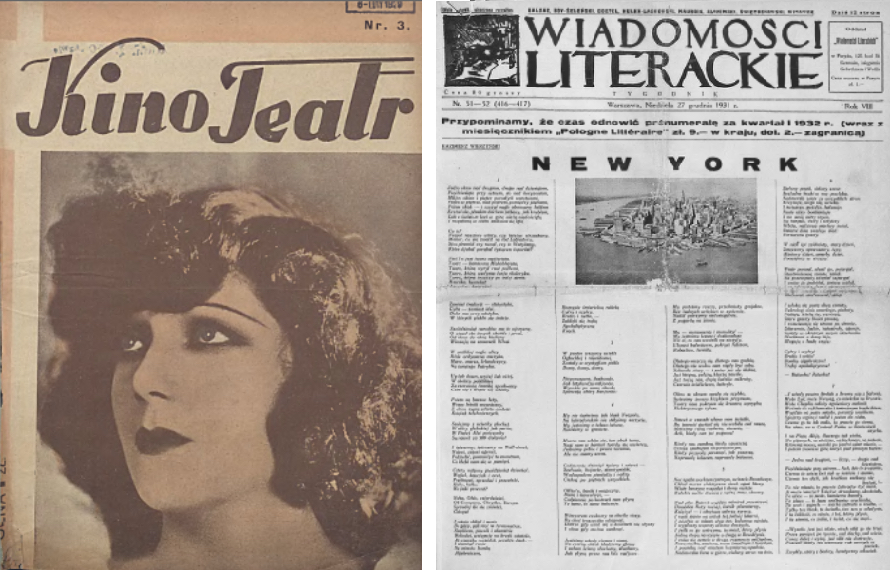 Zahorska also found the works of Francis Picabia and René Clair particularly inspiring, admiring their abstract, stylistic innovations and the ways in which they portrayed the play between light and shadow (Zahorska, “Kubizm i jego pochodne”; Kuc 109). In other words, Zahorska saw cinema as a groundbreaking medium that, through experimentation in form, structure, and montage, was capable of much more than serving as means for narrative storytelling (Zahorska, “Treść czy abstrakcja?”). 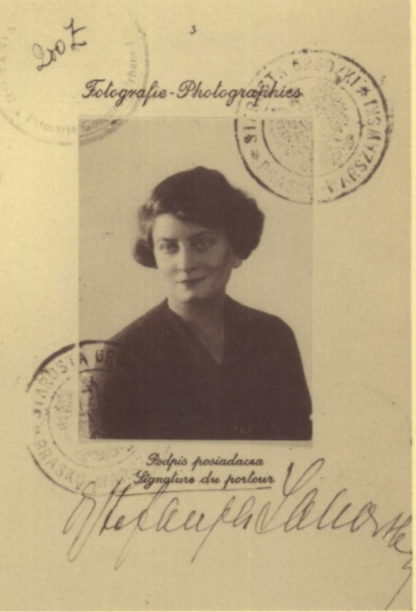 While Zahorska’s professional life blossomed, her personal life was teeming with turmoil. Sometime in her early thirties—in the beginning of the 1920s—the journalist married an officer of the First Brigade, Bohdan Zahorski. (In the Polish language, family names change their endings depending if the first name is male [-i or -y] or female [-a]. So, the last name “Zahorska” is a female variant of “Zahorski.”) Very little is known of Zahorska’s private matters, and most of the existing information about this relationship is extrapolated from surviving correspondence. According to letters to Leonia Jabłonkówna, Zahorska’s long-term editorial assistant and friend, her marriage was dictated by a passionate, yet very short-lived love. Soon after leaving Zahorska for another woman, Zahorski developed a serious health condition, probably Parkinson’s disease. In Jabłonkówna’s account, the rapid deterioration of her ex-husband’s health was, to Zahorska, a tragedy greater than his betrayal, which is evidenced by the fact she maintained regular correspondence with the woman who took her place beside Zahorski (Cybulska 20). The women discussed possible treatments, hoping to save Zahorski from falling into a depression and taking his own life, which, unfortunately, he ultimately did. Zahorska’s tragic romantic involvement with Zahorski served as the basis for the fictionalized relationship portrayed in her debut novel Korzenie [Roots], which was published in 1937. 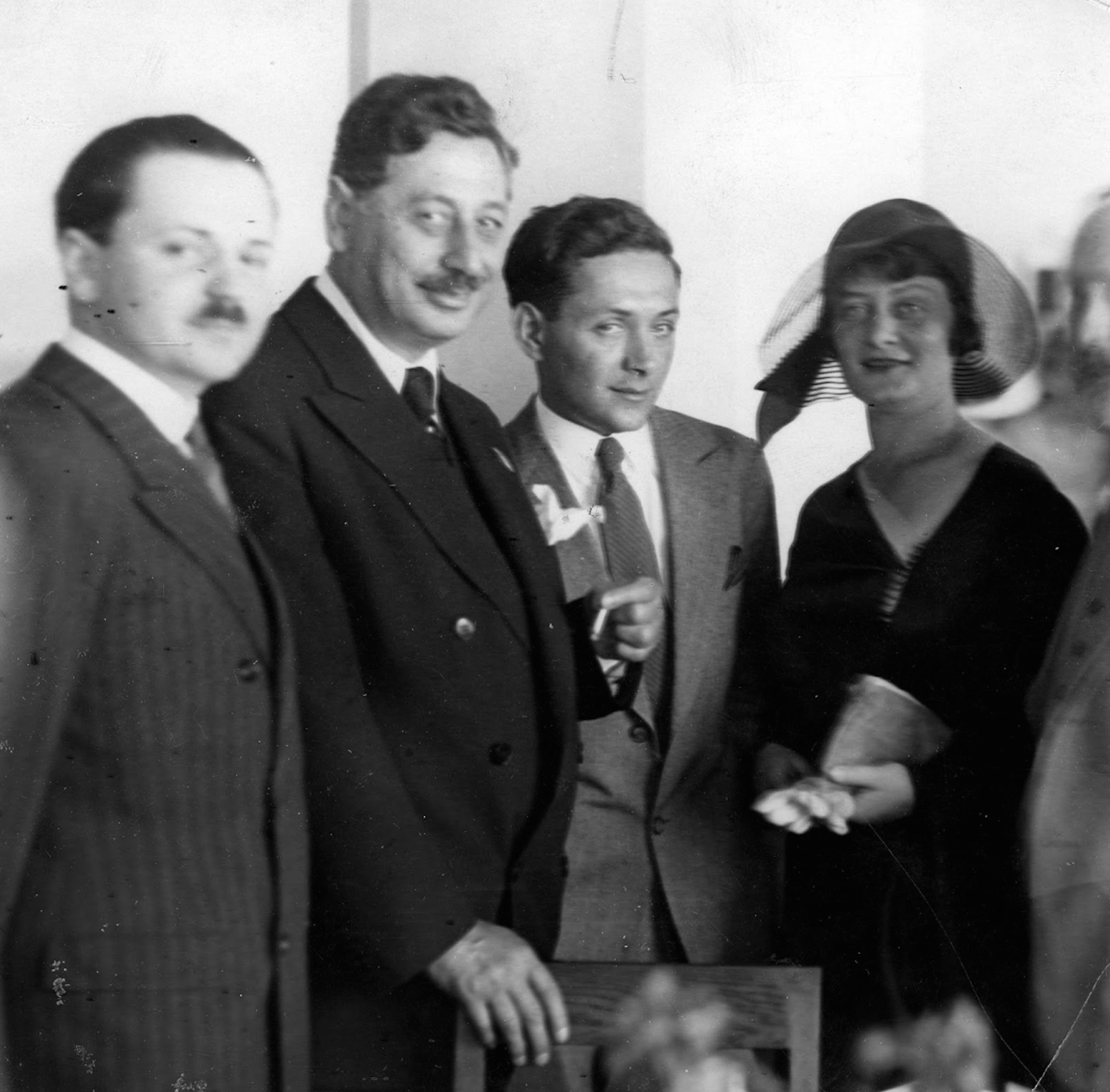 Stefania Zahorska at a conference in June 1930. Courtesy of the Narodowe Archiwum Cyfrowe [National Digital Archive] of Poland.

Throughout the 1920s, Zahorska often expressed her disappointment in the national film product and worked to legitimize both filmmaking and film analysis as worthy of study. As a critic, she reasoned that the poor quality of Polish films could be blamed on low standards of scriptwriting and a lack of talented professionals within the young industry (Zahorska, “Film w naftalinie”). She lamented the fact that no educational institutions in the country taught filmmaking as a subject (a situation that remained unchanged until 1948). Zahorska was also involved in popularizing film analysis as an academic discipline in its own right. For instance, she gave a presentation on aesthetic and formal properties of cinema at the Philosophy Conference in 1927 in Warsaw. 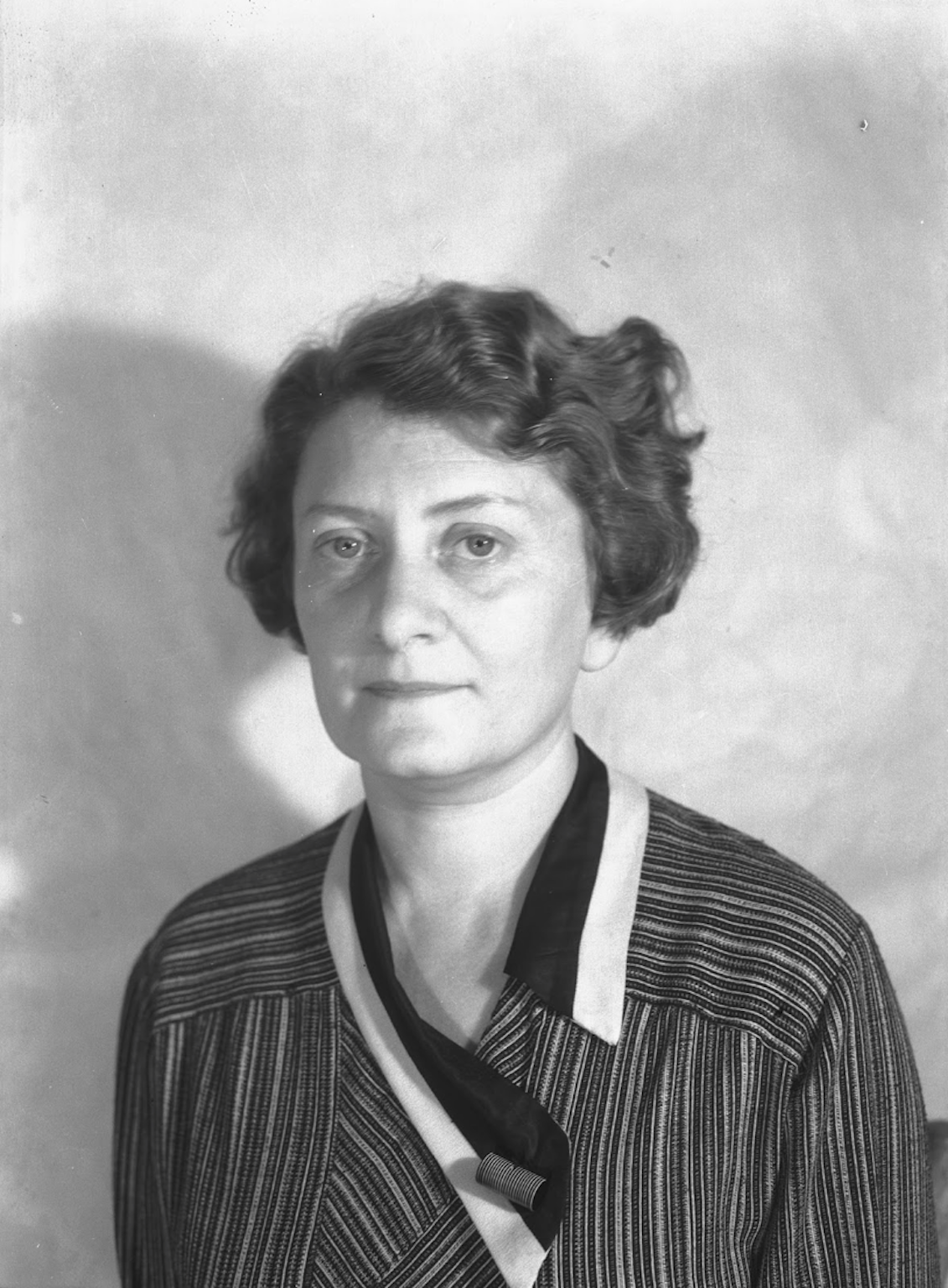 In the 1930s, Zahorska concentrated her intellectual efforts primarily on film criticism, and she continued to challenge the national industry. At the time, the notion of nationhood resonated particularly loudly in Poland, which had gained independence from German, Austrian, and Russian empires only twelve years earlier. She often criticized Polish film productions for their triviality and sentimentalism, deeming the vision of the nation they propagated as problematic. “When the wars end, and when the map of Poland placed itself on the screens, in all its glory, the director looks around, anxiously, at the Polish reality, and all he can see is military parades. Where is the Poland that lives, works and progresses after wars, and independently from military parades?” she asked in a 1935 article in Wiadomości Literackie (Zahorska [title unknown]).

Initially, Zahorska was somewhat skeptical about the popularization of talkies, which occurred a few years later in Poland than in the United States (Hendrykowska 121). In her writing, she framed sound as a potential distraction from the moving image. “Cinema,” she suggested in an article from 1930, “requires more variety, as well as more limitations of its separate elements” (qtd. in Radkiewicz 340). Soon, however, she changed her mind, believing that this added dimension could be incorporated into the plot with productive results, creating a more authentic diegesis (Zahorska, “Sprawy i sprawki XI muzy”).

Fully aware of the dangers she faced as a woman of Jewish heritage, Zahorska left Warsaw for Paris at the outbreak of the Second World War. After spending a year in France, she then went to London, where she resided for the remaining twenty years of her life. An emigrant status never stopped her from engaging with the cultural life of her home country. She was a founder of the Association of Polish Writers in London, and, from 1950 onward, she co-wrote (with Adam Pragier) a regular cultural column titled “Puszka Pandory” [Pandora’s Box] for Wiadomości Literackie. In addition to being a frequent collaborator, Pragier was Zahorska’s longtime partner. To her own disappointment, Zahorska did not live long enough to see the fall of the Communist regime in Poland. Toward the end of her life, she wrote to one of her friends: “What will happen to our homeland, our Europe, our culture, our European tradition? […] All values, it seems to me, are under threat” (qtd. in Lisiewicz). 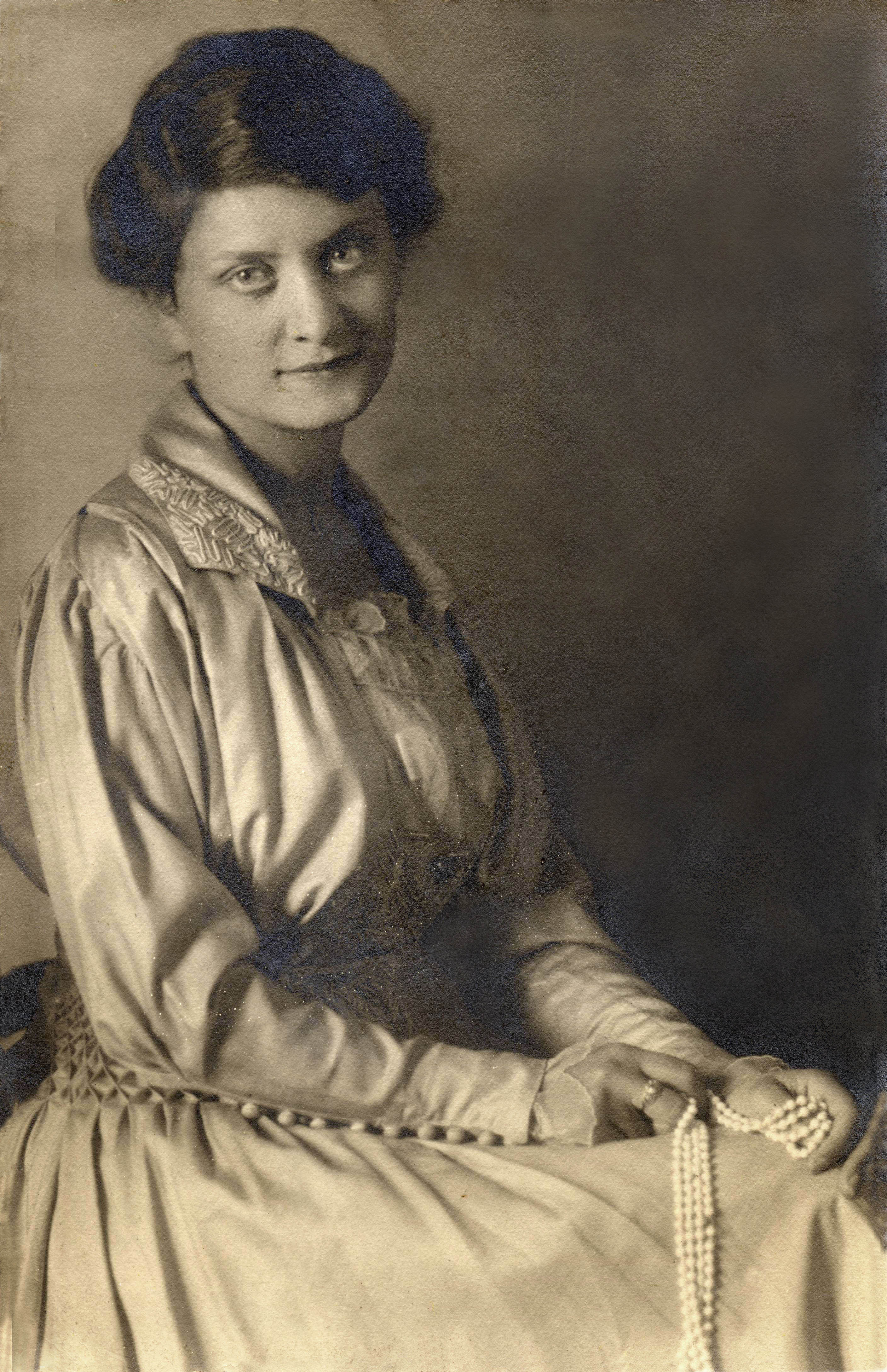 The sheer volume of Zahorska’s output, combined with her intellectual curiosity, earned her the title of “the most inquisitive observer of Polish silent film” (Lubelski 43-44). Despite being grounded in international, contemporary debates on cinema, and garnering acclaim for her witty, sharp prose, Zahorska is virtually unknown outside of her native country. To date, her rich oeuvre remains accessible only to Polish speakers. Additionally, some issues of the magazines that she wrote for, namely Kino-Teatr and Wiadomośći Literackie, have been digitized, but the vast majority remain unsearchable and difficult to access. This points to the difficulties we must face while trying to insert Zahorska, and other women like her, into a broader history of international film criticism.