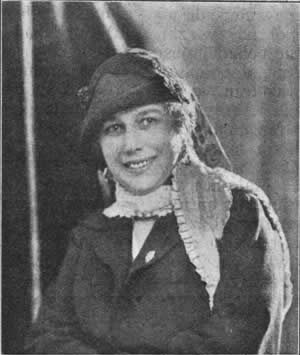 Very little is known about Nina Niovilla, who is considered to be Poland’s first female director, and possibly the only woman in the country who worked behind the camera during the silent film era. Even the roots of her last name—most likely a pseudonym—remain unknown. (Nina is a common diminutive form of the Polish name Antonina.) While we do know her family name, it is spelled multiple ways, most commonly as Petrykiewicz, but also as Petekiewicz or Petykiewicz; none of these variants appear in the country’s census or other legal documentation that could help us learn more about her background. A newspaper column from 1972 reasoned that Niovilla changed her original name to brand herself as a foreign film professional, and perhaps to boost her status while establishing her popular acting schools in the 1920s (Szletyński 5). While a reasonable assumption to make, it seems that she was using the name “Nina Niovilla” professionally since 1908, at least ten years before promoting herself as an educator. 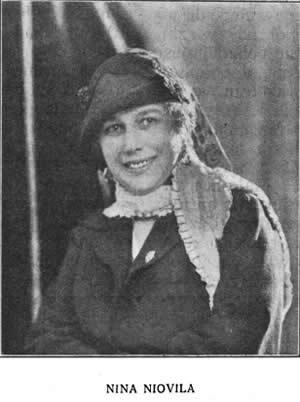 Promotional photograph of the director in Ekran i Scena no. 18-19, 1923. The same picture was used in the advertising for Youth Triumphs/Młodość Zwycięża (1923).

Like many other film pioneers, Niovilla entered the movie business from theater, where she worked adapting stage plays from French and English to Polish. Film historians Janina Falkowska and Marek Haltof both suggest that the filmmaker started her directing career in 1918 in the Weimar Republic, where she took on the nom-de-plume of Nina Von Petry (Falkowska and Haltof 99; Haltof 259), but I have found no further evidence to support that claim. However, between 1919 and 1923, Niovilla directed four screen dramas: Tamara (1919), The Guards/Czaty (1920), We Are Coming to Thee, Poland, Our Mother/Idziem do Ciebie, Polsko, Matko Nasza (1921), and Youth Triumphs/Młodość Zwycięża (1923). For Youth Triumphs, Niovilla also acted as a producer and a screenwriter, and it is entirely possible that her creative control extended beyond directing in the other productions as well. Interestingly, Niovilla’s curiosity with the cinematic medium developed relatively late in life, as she was in her early forties at the time of her directorial debut.

Although Youth Triumphs was ultimately her last film project, in 1926, a fan weekly reported that Niovilla was working on a “monumental” film titled In the Claws of Jackals/W Szponach Szakali, which would be based on a screenplay written by a professor specializing in Russian culture, presumably to maintain historical accuracy (Kinematograf). The following year, an article from the French press referred to the same production, calling Niovilla the “Polish Germaine Dulac” (“Cinémagazîne en Province”). It seems that the film never saw the light of day, and if it did, I have been unable to locate any other press mentions referring to it.

While Niovilla’s entire cinematic oeuvre is considered lost today, existing plot synopses indicate that her first three films were highly reliant on ideas of Polish patriotism and local folklore. The Guards was, in fact, an adaptation of a ballad by a renowned romantic poet Adam Mickiewicz. The choice of this source material worked to propagate cinema as a respectable, high-brow medium. In many ways, it was also reflective of wider trends in Polish filmmaking at the time: Poland gained independence from Russia, Germany, and Austro-Hungary in 1918, which had a decisive impact on the types of stories that made it to the screen. The country’s cinematic culture was invested in promoting stories of Polish identity, national struggle, and eventual victory against the odds. Many contemporaries, including film critic Stefania Zahorska, viewed such narratives as stifling and overall damaging to the quality of the nation’s creative output, but Niovilla continued to develop these themes in her work. We Are Coming to Thee, Poland, Our Mother was set in the Podhale region of the Tatra Mountains, and followed the life of the Gorals, its indigenous inhabitants. Little else is known about the film, except for the fact that it featured a Romanian woman in one of the leading roles.

Apart from patriotic themes, Niovilla’s work drew on established modes like the melodrama. The plot of Youth Triumphs, for instance, tells the story of a dramatic love-triangle between a young sculptor Jan (Michał Halicz), who returns to Poland after studying abroad, and two women, Irena and Lena. Throughout the film, Jan is torn between their affections. A series of tragedies ensue after, finally, he separates from Lena to be reunited with Irena. Halicz was a successful stage actor, known to moviegoers from his performances in Niovilla’s two previous films. 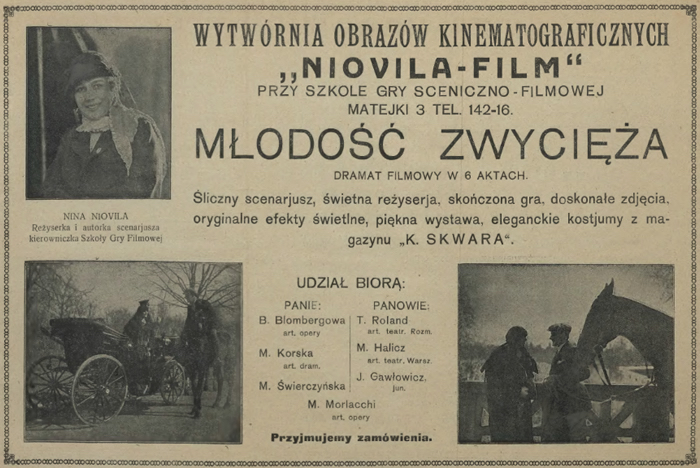 1923 advertisement in Film Polski for Youth Triumphs/Młodość Zwycięża (1923). Note the photograph of the director, and the spelling of her name with a single “L.”

While a reviewer for Film Polski [Polish Film] spoke highly of Niovilla’s sensibility as the director of Youth Triumphs, he was less impressed with her skill as a storyteller:

While Mrs. N. Niovilla’s screenplay does not have a deeper ideological underpinning, it does not differ vastly from the standard template we encounter in the majority of foreign films […]. The subject is filled with hopeless sadness—pessimism. If the world is not so gay, shouldn’t we choose subjects that are more light-hearted? Truth be told, the author of the screenplay ends the film joyfully and happily, but five and a half acts [out of six] are not lightened up by a single bright ray. Mrs. Niovilla is rehabilitated by her directing. The work is conscientious, meticulous, not inventive, with no directing ideas, on the whole is well-grounded and polished in every detail. And the most important: the film has no cardinal directing errors. There is a familiarity with the craft, a conscious method (Russian and Italian influences): the director knows what they want. They are not distracted, walking on the trodden path, not confused—not lost in the labyrinth of chaos. (Trystan)

It is worth noting that this critic saw the aesthetics of Youth Triumphs as equal to those of higher budget, foreign pictures. We can speculate that, as a multi-linguist, Niovilla kept up to date with the most recent developments in the global film industry, perhaps reading French or English trade magazines. 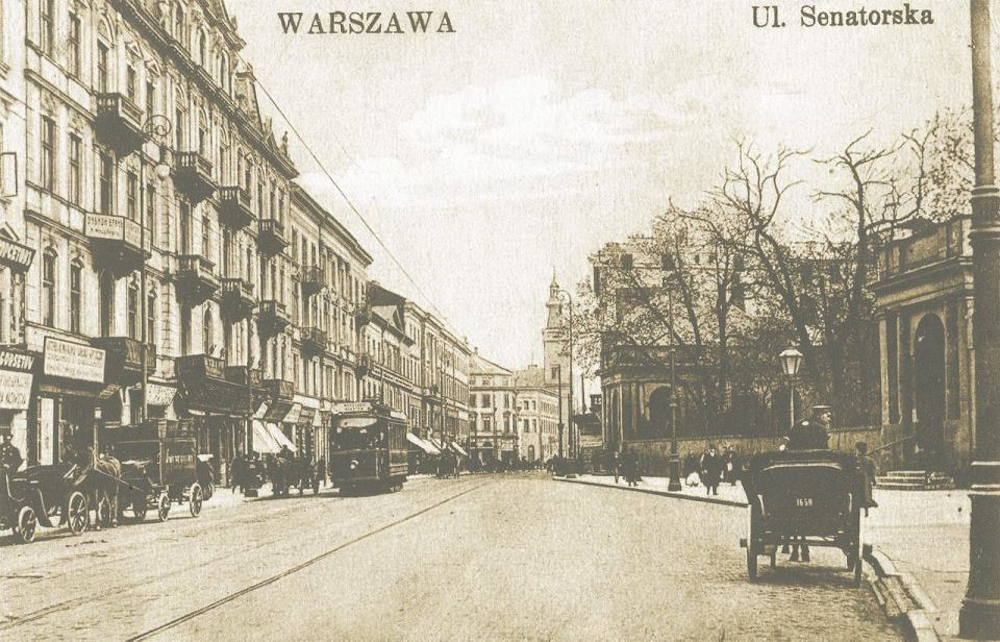 Senatorska street in Warsaw, where Nina Niovilla lived in the 1920s. 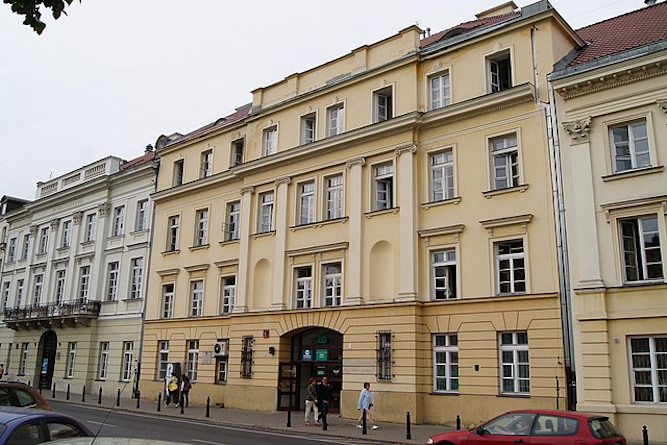 Surviving documents indicate that Niovilla also had some experience in front of the camera, although we do not know which films, if any, she may have appeared in. A compendium of Polish screen actors compiled in 1928 lists her name and address at Senatorska 6, a rather up-scale location in the middle of the historical center of Warsaw (Malczewski 145). Remarkably, the famous Hollywood actress Pola Negri lived at the same address in the 1910s (Kotowski 12).

Niovilla’s involvement in the burgeoning movie industry was not limited to film production. According to Rewia Filmowa [Film Revue], she was the founder and director of a network of acting schools based in the country’s key cultural centers, from Warsaw, through Cracow, to Łódź, Poznań, and Lwów (Banaszkiewicz and Witczak 206). It seems that these institutions were established sometime in the 1920s. Although the column refers to them as “film schools,” instruction focused solely on screen acting rather than any other occupation within the industry.

Wiesława Czapińska has argued that institutions of this kind became particularly popular in the 1920s, and that their founders often had few ethical concerns, and were interested in capitalizing on the ambitions of young, sometime gullible actors, above all else (115). Indeed, by the end of the decade, Niovilla’s enterprises attracted a lot of negative attention, as one of her co-directors—Jan Czesław Sikorowicz—was prosecuted for fraud. This is the context in which, unfortunately, this pioneering woman is most remembered today. Sikorowicz used his association with Niovilla to advertise his own, non-existent school for screen performers in Cracow. After collecting a hefty advance payment from each prospective student, Sikorowicz left town for good (Włodek 78). Niovilla testified at Sikorowicz’s trial, and ultimately never faced legal charges herself. The journalist Marek Sołtysik maintains that as a creative director permanently based in Warsaw, she had no involvement in the scam, and that her only fault was to trust such a skilled manipulator (256). Still, Niovilla’s activities as a businesswoman raised some concerns.

After the scandal, which culminated in 1934 with five years of imprisonment for her former employee, Niovilla started to move away from the public eye. Her acting schools closed down in the same decade, and very little is known about their founder’s career after that, except for the fact that she went back to translating plays by the end of the decade. We know that at some point—probably before the outbreak of the Second World War—Niovilla migrated to France. Her tombstone in the Batignolles cemetery, in Paris, lists 1966 as the year of her death.