Frequently lauded as “die Duse des Kinos” [the Duse of the cinema], as Poul Elsner noted in Weltrundschau in 1911 (517), the Danish actress Asta Nielsen was the first major star of German silent film. She acted in more than seventy films, all but four of them made with German production companies, during the twenty-two years of her film career. The phenomenal success of her debut film, Afgrunden/The Abyss (1910) enabled her to become the first global film star under the new monopoly distribution system. From 1910 to 1914, she collaborated closely with director Urban Gad, who was also her first husband, under the auspices of Deutsche Bioscop and Projektions-AG “Union” (PAGU), and later established two film companies of her own. Although she struggled to come to terms with the director-centric turn of the film industry in Germany in the 1920s that restricted the artistic autonomy she had enjoyed in the 1910s, she made several of her most artistically impressive films, including several Weimar street films, during this period. In 1932, she acted in her only sound film, Unmögliche Liebe/Impossible Love, which was also her final film, aside from two documentaries about her made decades later. 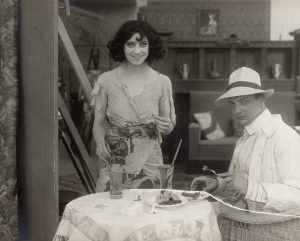 Publicity photo of Asta Nielsen and Urban Gad on set in Berlin. Courtesy of the Danish Film Institute.

Nielsen’s path to film was as unlikely as it was dramatic. She was born in Copenhagen in 1881, the second child of an impoverished working-class Danish couple, Jens Christian and Ida Frederikke Nielsen. She spent seven years of her early childhood in Malmö, Sweden, before returning to Copenhagen, where her father died shortly before Asta’s fourteenth birthday. Biographer Poul Malmkjær notes that her mother hoped that Asta would become a shop attendant (38), but she dreamed of the theatre. In 1899, her striking tenor voice attracted the attention of actor Peter Jerndorff, who arranged for her to have free acting, elocution, and dancing lessons. On Jerndorff’s recommendation, Nielsen was offered a position at the Danish Royal Theater in the fall of 1900, but the birth of her illegitimate daughter Jesta, likely fathered by Jerndorff, in July 1901 caused her to lose both her voice and her position at the Royal Theater. During the next decade, she attempted repeatedly to break into the Copenhagen theatre world, acting in minor roles at the Dagmar Theater and in provincial touring troupes, but without notable success. 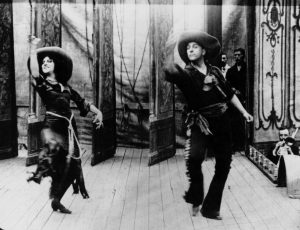 Nielsen’s cinema debut, Afgrunden, was a collaboration with screenwriter/director Gad made on a minuscule budget over the course of a single week that came about almost accidentally as a last-ditch attempt to raise her profile in the Copenhagen acting world, but when it premiered in Copenhagen on September 12, 1910, it became an overnight international sensation. Afgrunden was one of the earliest and most successful Danish erotic melodramas, an extremely profitable genre throughout Europe between 1910 and 1915. The film’s plot line is high melodrama: Nielsen’s character, the respectable bourgeois music teacher Magda Vang, becomes engaged to a pastor’s son but runs away instead with a circus cowboy named Rudolph, who cheats on her with other women, forces her to play piano in cafés to support his drinking habit, and ultimately tries to extort money from her abandoned fiancé. When she protests, Rudolph tries to strangle her, forcing Magda to stab him to death with a table knife. The final scene of the film shows a dazed, dry-eyed Magda being led away by the police. Nielsen’s minimalistic acting style, particularly evident in the memorable final scene, contrasted sharply with the histrionics of other early film actresses, while her remarkably expressive eyes and provocative but restrained sensuality, which featured prominently in the film’s extended erotic gaucho dance sequence, enraptured audiences and critics alike. In 1924, the Hungarian-born film commentator and theorist Béla Balázs described the subtlety of Nielsen’s sexual appeal:

She is never undressed, she does not show her thighs like Anita Berber…, and yet this dancing harlot could take lessons from Asta Nielsen. Her belly dancing is tame compared to Asta Nielsen fully dressed. … [Asta Nielsen’s] spiritualized eroticism is demonically dangerous, since it works at a distance through all of her clothes (162).

After spending a decade struggling to make her name in the Danish theater world, Nielsen suddenly became an international celebrity. 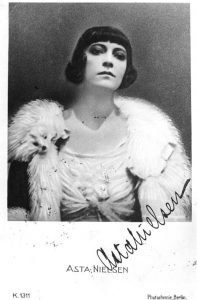 Nielsen was recruited to work in the German film industry, where she soon became one of the most successful and aggressively marketed film stars of the period. Danish journalist Adolf Langsted reported in 1916, “Jeg sad i Paris og saa Filmens Stjerne stige: med Undren opdagede jeg at den var—dansk. Den første Filmskuespillerinde til at opnaa Verdensry var Asta Nielsen” [Trans.: I sat in Paris and saw film’s star rise: with wonder I discovered that it was—Danish. The first film actress to attain world renown was Asta Nielsen] (11).  In an era when actors and actresses were rarely credited on-screen for their roles, Nielsen’s global fame and the commercial success of her films gave her the necessary leverage to demand an active role in the production of her own films. In the summer of 1911, Austrian film distributor Christoph Mülleneisen orchestrated an agreement among several German film production companies, including Paul Davidson’s Projektions-AG Union (PAGU) and Carl Schleussner’s Deutsche Bioscop, to establish a new monopoly distribution company, Internationale Film-Vertriebs-GmbH, based in Vienna and headed by Davidson, which would distribute thirty-two Asta-Nielsen films over the next four years. Historian Andreas Hansert documents that Nielsen agreed, in exchange for an annual salary of 80,000 German marks, 33.3% of the revenues generated by her films, full artistic freedom in choosing her screenplays, costumes, and supporting actors, and, perhaps most importantly, the right to be directed exclusively by her soon-to-be husband Gad (48). 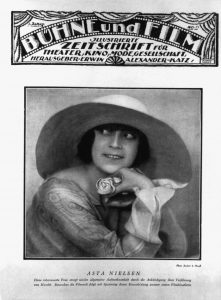 As a result of these favourable contractual terms, Nielsen was able to be intimately involved in the creation of both her films and her public persona, unlike many Hollywood stars whose image was dictated by the studios. Working closely with Gad on each year’s Asta Nielsen Series, a collection of eight to ten films that had been pre-sold to distributors around the globe, Nielsen exercised a degree of control over her work on an artistic, technical, and economic level that was extraordinary for a woman at the time. Heide Schlüpmann explains, “Under the sign of the Asta Nielsen series, Nielsen worked with a producer and director in a contractually secured constellation in which all of the freedom was hers” (2012, 47). Some of this freedom may have been due to her close, collaborative relationship with Gad, with whom she made the majority of her (and his) most commercially successful films over a four-year period. Although, as Stephan Michael Schroeder documents, Gad provided detailed scripts for his wife’s roles, Nielsen claimed primary credit for the films she made with Gad (194). Gad is credited as both director and screenwriter on most of their joint films, but Nielsen, in an interview with Danish film historian Marguerite Engberg, described his scripts as partially-completed canvases that left her considerable room for improvisation and dismissed his contribution as primarily concerned with “coming up with good roles for me” (8). 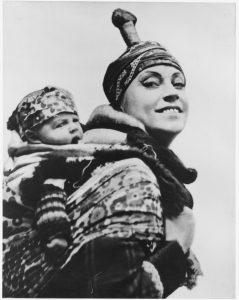 Asta Nielsen as Ivigtut in Das Eskimobaby (1918). Courtesy of the Danish Film Institute.

In her memoirs, Den tiende Muse [The Silent/Tenth Muse], which have not been translated into or published in English, Nielsen claimed to have had a hand in the pre- and post-production phases of her early films, from choosing the screenplays and making her own costumes to splicing the negatives and helping to market the final product, much like her character in Die Filmprimadonna (1913) (Nielsen 1945-46). During World War I, Nielsen parted ways with Gad and formed her own Berlin-based production company, Neutral-Film GmbH. The films Nielsen made with Neutral, including Das Eskimobaby/The Eskimo Baby (1918), and Die Börsenkönigin/ Queen of the Stock Market (1916) are clever and bold, but their circulation was limited by wartime conditions. Many were not released until 1918 and several of the original negatives were later destroyed in a warehouse fire in Berlin. After the war, in 1920, she launched another production company in Berlin, Art-Film GmbH, under whose auspices she made such ground-breaking films as Hamlet (1921), in which she plays a cross-dressing female Hamlet. 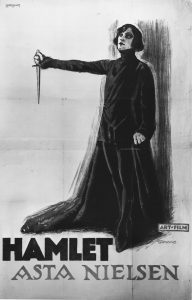 Publicity poster for Hamlet (1921). Courtesy of the Danish Film Institute.

The increasingly director-centric production conditions in Germany after 1918 meant that Nielsen could no longer exercise the same degree of influence over her films as before the war. As her highly publicized disagreement with Ernst Lubitsch over the making of Rausch/Intoxication (1919) reveals, she refused to accommodate directors’ insistence on their complete artistic control over the films they made. She continued making films in Berlin until 1932, including such critically-acclaimed Weimar street films as Die freudlose Gasse/ The Joyless Street (1925) and Dirnentragödie/A Tragedy of the Streets (1927), in both of which she played an aging prostitute, but she found herself increasingly excluded from the off-screen elements of filmmaking she had once handled with such finesse. She returned to Denmark in 1937, where she lived in quiet obscurity as “Fru Nielsen”—except for a sensational love match at the age of eighty-eight with an art dealer eighteen years her junior that made headlines across Germany and Denmark—until her death in Copenhagen in 1972. 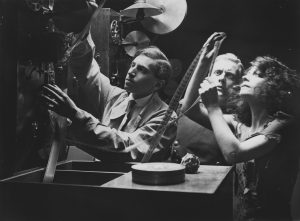 2. Asta Nielsen as Actress and Producer

2. Asta Nielsen as Actress and Producer

Mod Lyset/Toward the Light (1919) is streaming online via the Danish Silent Film platform.

Most of the information about Asta Nielsen’s filmography was taken from Heide Schlüpmann and Karola Gramann, Nachtfalter. Asta Nielsen, ihre Filme (2009).