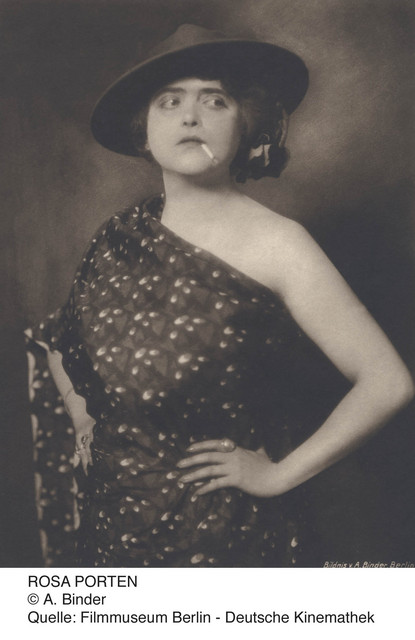 Rosa Porten’s work as a screenwriter, an actress, and a film director has been practically neglected in film history, but what she accomplished in the German silent cinema is truly noteworthy. In a two-decade career, from 1906 until 1928, she created a cinematic oeuvre that was substantial, original, versatile, and entertaining. The exact number of films to which Rosa Porten contributed is uncertain, but historical substantiation points to around forty titles. Between 1916 and 1919 alone, she wrote and co-directed at least twenty-four catching comedies and gripping social dramas and in most of them she played the protagonist. Even more notable in retrospect is that Porten’s stories often privileged the perspective of a female character who, with non-conformist pragmatism or jokey recalcitrance, seizes her chance to defy bourgeois conventions and role patterns. In the trade press, the comedies were often praised: 1e Internationale Film-Zeitung highlighted the “überschäumende Komik” [scintillating jocoseness] of Die Film-Kathi (1918) (1918, 47); Der Kinematograph noted the “herzerfrischenden” [heart-freshening] humor in Die Erzkokette (1917) (1917, n.p.); both Der Film and 1e Internationale Film-Zeitung noticed the serious undertones in Der Neueste Stern vom Varieté (1917) and Das Musikantenmädel (1918) respectively (1917, 57; 1918, 58). 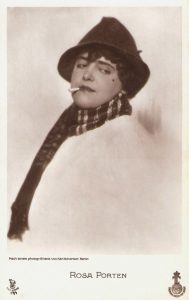 My fascination with Rosa Porten was triggered by Wanda’s Trick (1918), a comedy with close to feminist wit brought to my attention by Elif Rongen-Kaynakçi (EYE Filmmuseum), with whom I prepared the film program for the Women and the Silent Screen V Conference in Stockholm in 2008. The director, Dr. R. Portegg, was identified, but that this name was a pseudonym used by the couple Rosa Porten and Franz Eckstein in their function as co-directors I gathered from the website of the Deutsches Filminstitut, where Gabriele Hansch and Gerlinde Waz had uploaded their rare research on German women filmmakers in the silent era (now f-films). This information motivated Rongen-Kaynakçi to restore another, yet incomplete, print of a Dr. R. Portegg comedy, Die Landpomeranze/The Unwieldy Country Girl (1917). A consecutive revelation was the homage to Rosa Porten initiated by Jeanpaul Goergen in 2010, which included Dr. R. Portegg’s drama Das Opfer der Yella Rogesius/The Sacrifice of Yella Rogesius (1917). The latest archival finds were prompted by Mariann Lewinsky, who invited me to curate a program of comedies by and with Rosa Porten at Il Cinema Ritrovato 2014 in Bologna. Not only were brand-new restorations provided of Wem gehört das Kind?/To Whom Belongs the Child? (1910), by Deutsche Kinemathek and Fondazione Cineteca di Bologna, and Das Teufelchen/The Imp (1917), by Österreichisches Filmmuseum, but also for the presumed lost comedy, Der Neueste Stern vom Varieté/The Latest Star in Vaudeville, rediscovered by Rongen-Kaynakçi at the EYE Filmmuseum. These rare prints and the scarce paper documentation offer intriguing glimpses of Rosa Porten’s appealing and extraordinary oeuvre. 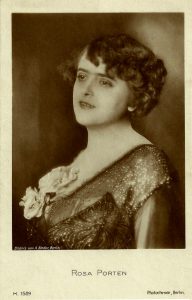 Rosa Porten was a daughter of the opera singer, theatre director, and early filmmaker Franz Porten, and the older sister of Henny Porten, who would become the most popular German female star of the silent era. Before 1910 the careers of the sisters ran parallel, as both performed in their father’s Tonbilder. Such “sound pictures” consisted of a three to five minute, one-take scene to accompany a well-known song or opera aria, which was played from a record. The earliest Tonbild by Franz Porten, Meissner Porzellan (1906), presents the sisters in their screen debut. Rosa plays a female and Henny a male porcelain figurine who both come to life once they are taken out of their case and paper wrapping. The record is presumed lost, but the lyrics sang the praises of the china mentioned in the title and the music was a gavotte. Franz Porten made several more  Tonbilder featuring his daughters, who initially sang the recorded songs, through which they attained some prominence as Geschwister Porten (Goergen 2012, 169). In 1910 Rosa and Henny likewise acted side by side in Wem gehört das Kind?, an eight minute, fast-paced comedy sending up predictable but mistaken doubts on the part of the female protagonists about one another.

Henny Porten used to mention that Rosa had convinced the producers at the Messter’s Projektion GmbH that her younger sister would be the suited actress to play the blind woman in the romance she had written, Das Liebesglück der Blinden/The Happiness of the Blind Woman (1911). According to Henny, an article in Illustrierte Filmwoche notes, this film gave an important boost to her career because fans kept asking for more films with her (Jacobsohn 1917, 120). For Rosa Porten, the appreciative reception of the story in trade papers like Licht-Bild-Bühne (1911, 12) implied recognition as a professional screenwriter, an occupation which she kept up throughout her career. Want of credits makes it difficult to identify with due certainty her pre-war scenarios, but it is generally accepted that she wrote at least one more melodrama for her sister, Das grosse Schweigen/The Big Silence (1916). During the war years, reviews in the trade press, newspapers, and film magazines on and off pointed Rosa Porten out as the scenarist, most notably when she also played the female protagonist in films by Dr. R. Portegg. After 1918 she was usually properly accredited, for instance with the scripts for Asta Nielsen, Hedda Gabler (1924) and Die Schmetterlingsschlacht (1924), according to a 1924 program booklet for Die Schmetterlingsschlacht in Illustrierter Film-Kurier (n.p.).

The retrievable highlight of Rosa Porten’s career constitutes the years 1916, 1917, and 1918, in which she and her husband, Franz Eckstein, were affiliated with the Treumann-Larsen Filmvertriebs-GmbH, the independent film production company (1913-1922) of the actors Wanda Treumann and Viggo Larsen. In these particularly prolific years she wrote scenarios for and co-directed, using the pseudonym Dr. R. Portegg, at least twenty-four feature-length films. In three dramas and two comedies the popular actress Wanda Treumann played the protagonist, in some ten comedies and six dramas Rosa Porten herself acted the principal role. In conformity with the German star system, initiated by Asta Nielsen, these films were marketed as “Wanda Treumann Serie” or “Rosa Porten Serie.” According to an article in Illustrierte Filmwoche by a critic under the pseudonym “Spectator,” it had been the managing director of the production company, Wanda’s husband Carl Treumann, who persuaded Rosa Porten to embody in person the characters originating from her fantasy:

Now, Rosa Porten’s resounding successes have shown that Mr. Treumann was right and corroborated that there is space for two film stars Porten in the world. The audience is now accustomed to admire and adore besides the blonde Henny the zesty Rosa–also because their profoundly dissimilar personalities assign to them types of roles which foreclose every rivalry from the outset (1917, 115). 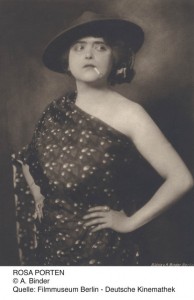 While Henny was molded into the German prototype of the self-sacrificing, virtuous melodrama heroine, Rosa Porten fashioned for herself preferably comic characters, who mocked the gutless and idleness of (men of) the upper class and crossed gender boundaries with gusto. This is substantiated by the extant two reels of Die Landpomeranze and in Der Neueste Stern vom Variété, in which she plays a farmer’s daughter and a vaudeville artiste, respectively. The first concocts a range of comical pranks to shake off the patrician whom her father envisions as her fiancé, even cross-dressing as his valet to marry him off to the “finance lady” whom he matches better. The vaudeville artiste transmits the assertiveness, which she demonstrates in her stage act as a boxer, to her private life with the aim of hooking her spoiled and feeble-minded fiancé. To be sure, the tone of these films is unconditionally nonsensical, but their spunky humor holds the promise that a morale in which women are expected to be obedient, passive, and virtuous was due to be abolished. Rosa Porten’s female protagonists are recalcitrant against conventionality, gutsy in finding solutions, and carefree in relationships. Her comedies, moreover, are ultimately nonjudgmental about whomever’s conduct, which makes them pleasant for everybody. On the other hand, they reverberate the all too real insecurities women and men experienced about the social order and gender relationships that the war was bringing about. This is equally tangible in the two surviving comedies by Dr. R. Portegg in which Wanda Treumann played the female protagonist. Stressing the realistic propensity of character and plot, Treumann plays her roles with a mix of comical obstinacy and decorous pride in whatever hilarious or precarious situations Rosa Porten’s scenario and co-direction put her. Porten thus created for herself a distinct comic screen persona, but also adjusted her comedy to the aptitudes of other actresses.

The association with contemporary actuality is further suggested by the films’ realistic settings, such as a cigarette factory, a typing office, a farm, and outdoor scenes in parks and streets, which add a down-to-earth flavor. This even holds for the drama Das Opfer der Yella Rogesius, of which the climax consists of a horse race by the former circus girl Yella set in a hippodrome. The perspective of the female protagonist is privileged again and allows the film, with its tragic ending, to contrast an upper class man’s lack of fortitude with a working girl’s loyal and plucky pragmatism. Whether wrapped in humor or presented as drama, the female protagonists’ resilience to get a life that they envision seems to be a recurring motif in Rosa Porten’s films from the war years.

2. Rosa Porten as Director and Screenwriter

2. Rosa Porten as Director and Screenwriter

3. Rosa Porten as Screenwriter and Actress