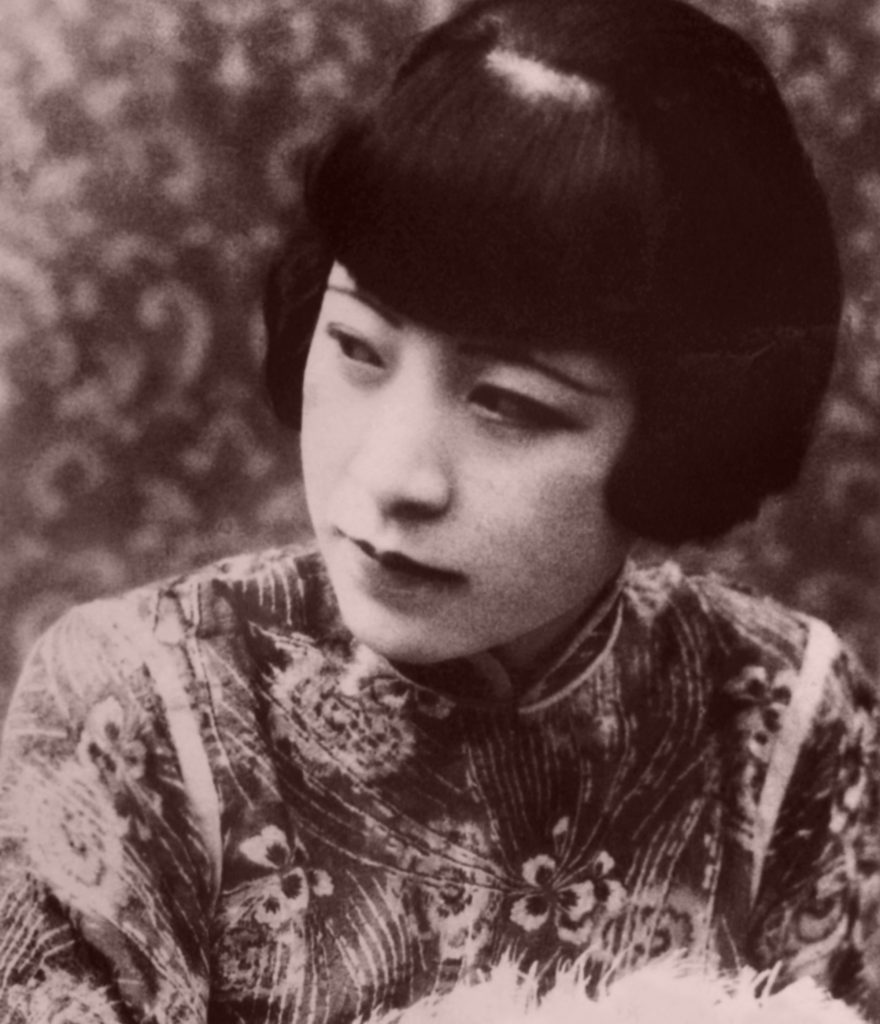 Born in 1903 as Peng Jianqing, Helen Wang was raised in a traditional scholarly family within a confined compound in Wuhu, Anhui Province. She was the only girl and her parents’ favorite. At thirteen, her father moved the entire family to Shanghai so she could attend St. Mary Girl’s School. While there, she learned English, read Western literature, enjoyed music, and adopted the English name of Helen (Shen 56). Before she graduated, both her parents passed away, leaving her in the care of her eldest brother, who soon married her off to a man working for a Sino-Japanese mine in Fengtian (now Shenyang) that was more than a thousand miles away from Shanghai. Sixteen-year-old Helen bore her husband’s debauchery and anti-Chinese deference to his Japanese employers for a brief time before returning to Shanghai to try to make her own life. Since her brother was unwilling to take her back in, she took up residence with her godmother and managed to secure a job as a typist in a company under British American Tobacco (S. Zhang 404). 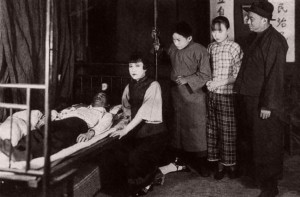 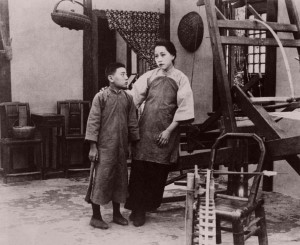 Helen’s personal engagement with film began when she visited the set of Laborer’s Love (1922) with a friend to see how a film was made. While she observed the awkward performance of a first-time actress, director Zhang Shichuan was impressed with her modern fashion sense and elegant manners (S. Zhang 404). This father figure of Shanghai cinema had, until then, only worked with stage actors from the lower class. He felt that Helen exuded the air of a young mistress from a wealthy family, which made her perfect for the female lead in his then upcoming film, Orphan Rescues Grandfather (1923). As a novice in the film industry, Helen abandoned her original name of Jianqing Peng and took the new name of Hanlun Wang: while Hanlun was in fact the Chinese pronunciation of Helen, “Wang” was a surname she picked because this Chinese character resembled the pattern on a tiger’s forehead (H. Wang 1962, 51). In her very first acting job, she was fortunate enough to work with renowned dramatist Zheng Zhengqiu, in a role that positively portrayed “a new domestic subject, a self-assertive woman who [is] economically independent and taking the responsibility of educating the younger generation” (Chen 31). 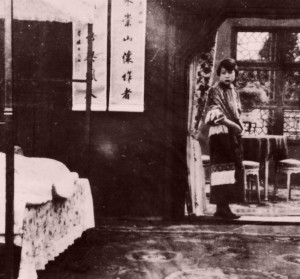 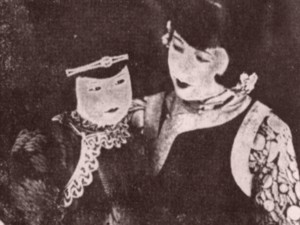 Orphan Rescues Grandfather became a box-office hit and a significant cultural event of 1923, not only saving its production company, Star Film Company, from bankruptcy, but also lending hope to the promise of the budding film industry (Xu and Sha 59; S. Zhang 405). Helen was immediately recognized as a promising star. Star Film Company lost no time in making two more films with her the following year, Jade Pear Spirit (1924) and The Poor Children (1924), casting her in both films as a tragic young widow. These three films earned Helen the title of “the leading Chinese actress for tragedy” or the “Chinese Lillian Gish” (Chen 31-2). Despite quitting her job as a typist to work for Star full time, the company reneged on her promised salary. Disillusioned, Helen left to work with Great Wall Pictures Company instead.

Great Wall’s founding members studied filmmaking in the United States and were younger, more progressive filmmakers. In her first film with Great Wall, The World Against Her (1924), Helen played the role of Zhiruo, a young woman abandoned by her husband because he falls for another woman. Thrown out by her husband and mother-in-law, Zhiruo tries to make her way as an independent woman, even joining a woman’s association at one point, only to be thwarted at every turn by men who seek to exploit her weak social standing. In the end, she dies dreaming of a new society that is not so hostile to women. It is not hard to see the parallels between Zhiruo’s life and Helen’s life, which might have contributed to the success of her performance. Although the film does not have a happy ending, Zhiruo was purported to be the role Helen loved most (1962, 57). The performances of both Helen and Pu Shunqing, China’s first female scriptwriter, were particularly praised by critics (Tang 1093). 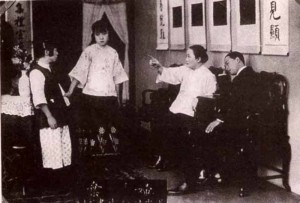 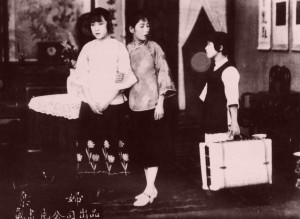 The success of The World Against Her established Great Wall’s reputation for producing “problem dramas” with a serious goal of making society better (He 1065). Thereafter, Helen made two more films with Great Wall, Between Love and Filial Duty (1925) and The Person in the Boudoir Dream (1925), continuing to capitalize on her positive box office reception as a tragedienne. In an article written by Wang in Chinese Cinema, she complained that despite  the commercial success of these films, Great Wall once again refused to pay her as agreed. She sued the company and won the case, only to receive a bad check in the compensation (1996, 1478). Unfortunately, this would not be the last time that Helen was exploited by a film company. In the following years, she played the female lead in A Widow (1926) for The First China Film Co.; costarred with the famous Butterfly Wu (a.k.a Hu Die) in Tianyi’s The Movie Actresses (1926); appeared in a supporting role in A Child Worker (1926), once again for Star Film Company; and finally, played the lead again in A Virtuous Woman (1927) for Newcomer Co. In each of these cases, the film company neglected to pay her the agreed upon amount (H. Wang 1962, 57). An earlier self-account published in the Young Companion magazine, however, stated that she did receive 1000 yuan from Great Wall and 2000 yuan for her Singapore adventure, for which Tianyi received 7000 yuan (H. Wang  2004, 109-110). This statement could be true, but there is also the possibility that she was hiding the truth about being exploited for various reasons. 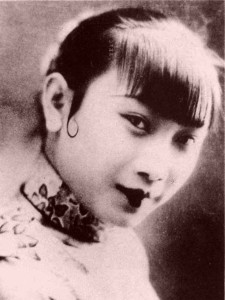 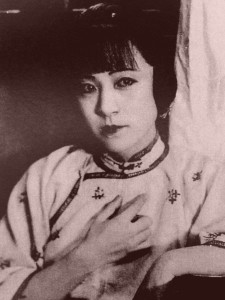 In any case, Helen persevered in the face of unfair treatment and exploitation. She was, after all, an actress who embodied the role of the modern woman by daring to “show her unbound feet on the screen” and to have “her long hair cut in front of the camera” (Z. Zhang  36; H. Wang 1962, 57). In late 1927, she embarked on an eight-month venture in Singapore, where male businessmen once again took advantage of her by putting her on display while charging people who came to see her and to seek her autograph (H. Wang 1962, 56). This humiliation was the catalyst that pushed Helen to return to Shanghai and work on her own films. As early as 1925, Helen wrote,

In the Chinese tradition, women rely on men and thus cannot resolve the sufferings they feel at home. I like women to have an independent spirit, and by “independent” I mean self-supporting. In order to achieve this, a woman needs to find a proper job; otherwise the talk of independence is an empty one. Before I was independent, I had suffered a lot in my own family and felt life was rather meaningless (n.p.).

Helen recalled that ever since making her first film, she tried her best to avoid the extras on the film set, as they were often hooligans and prostitutes who came to make a few dollars and who talked and flirted in vulgar language. Helen joined the film industry for a very different purpose, but she could not single-handedly change the public’s attitude towards the profession. 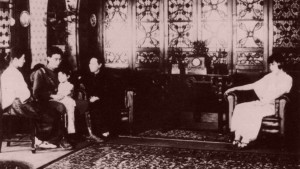 Helen Wang, The Person in the Boudoir Dream/春閨夢裏人(1925). Private Collection.

Eventually, in 1928, Helen decided to make one more film of her own and then quit the film industry altogether. She bought a screenplay from the famous novelist and screenwriter Bao Tianxiao, rented a studio space belonging to the Minxin Film Company, hung up a plaque for the self-named “Hanlun Film Company,” and began work on Revenge of an Actress/Blind Love (1929). She invited the renowned director Bu Wancang to direct the film, but, as the troubled director spent a great deal of time at the racetracks instead of the set, she ended up directing and editing the film herself. When Minxin moved to reclaim their studio space for their new projects, Helen had to finish filming at home, with the help of Cai Chusheng, who was then still an assistant director but who would soon become an important director (Shen 86-87). Helen recalled in a memoir: “I bought the scene breakdown script with 800 yuan, and a projector. I played the film bit by bit at home, and cut it bit by bit. After forty days of hard work, I finally succeeded” (1996, 1476-7). She took the film on tour and screened it in over a dozen cities. She made a fortune and left the film community in 1930, just as she promised she would when she returned to Shanghai from Singapore. 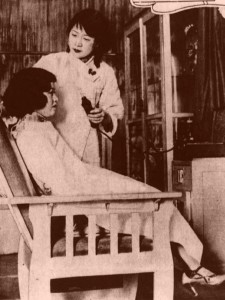 In terms of critical reception, Revenge of an Actress was a “family melodrama” written in the style of Mandarin-ducks-and-butterfly romances that were sympathetic to the idea of free love in a time when arranged marriage was still a common practice (L. Wang 27). In the very making and distributing of the film, however, Helen had succeeded in exacting her own “actress’s revenge.” One of Helen’s biographers, Shen Ji, recounts how, with the money made from the tour, she was able to pay her husband her divorce fee—topping it by a 1000 yuan to expedite the process out of spite (88). With what remained, she took lessons from an expert French cosmetician, and opened her own business, the Hanlun Beauty Parlor. Her first customer was none other than Butterfly Wu (Shen 90), her co-star in The Movie Actresses, who was well on her way to becoming China’s reigning actress of the era. Wang’s parlor thrived under the fame of the former star and ran successfully until the Japanese occupation halted business in 1937. True to her earlier nationalist sentiments, she had refused Japanese demands to become part of their propaganda machine (H. Wang 1996, 1477). 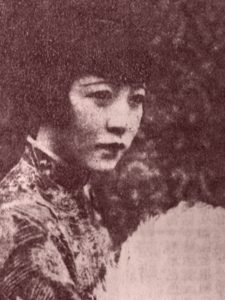 In 1954, Helen became a regular staff member at the Shanghai Film Studio, but as an actress, she could not adapt to the proletarian roles of the revolutionary period. In fact, no first-generation Chinese actors could. She played the mother of Wu Xun—the title role of The Life of Wu Xun (1950)—which became the target of attack in one of Mao’s political campaigns. In 1958, she made two brief appearances in The Legend of Lu Ban and A Great Upsurge, which wrapped up her entire film career. Helen led a peaceful, though lonely, life until her death in 1978 at the age of seventy-five.